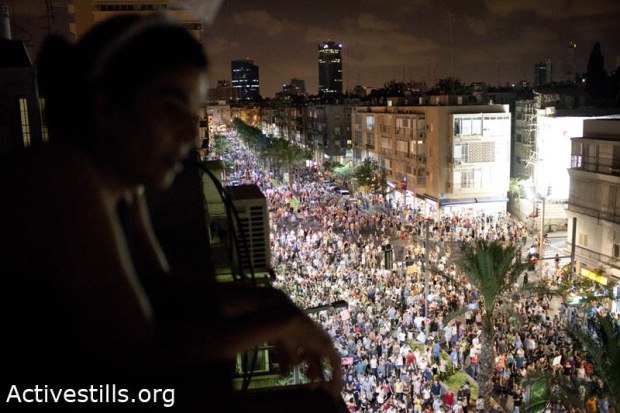 This post is joint reporting by Dahlia Scheindlin and Dimi Reider

Hundreds of protesters for social justice clashed with police in central Tel Aviv tonight under chants of revolution and signs reading “Mubarak. Assad. Netanyahu.” Some 42 people were arrested, a rare if not unprecedented number for a Tel Aviv demonstration on any issue.

After a huge turnout to a well-organized march (estimates vary between the 20 and the 40 thousand ), a clash began as the demonstrators were dispersing. Eyewitnesses said one person was detained, which prompted several dozen people to block the Kaplan-Ibn Gvirol intersection, a major junction in central Tel Aviv. The crowd quickly grew into hundreds, who camped out in the middle of the intersection, barricading it with barriers “borrowed” from nearby repair works. The crowd chanted slogans in favour of the police, pointing out they, too, can’t afford decent housing with their miserly salaries. Others spoke to policemen, encouraging them to fight for the right to unionise (which policemen in Israel are banned from by law). Eventually, police cleaned up the junction using selective arrests, mounted police and motorcycles. This assault was met with indignation by the crowd, who briefly lodged beer cans at the police, but the protesters quickly regained their composure and began singing pro-police and pro social justice slogans, punctuated with “Revolution! Revolution! Revolution” and “Non-violence! Non-violence!”. At one point, protesters went among the huge mounted police and offered them lollipops, which the policemen hesitatingly declined, pressing their hands to their hearts.

The protesters then attempted to march back up Dizengoff street to the nearest police station, in solidarity with their detained comrades. Police repeatedly blocked and gently thinned out the march, using very limited force and selective arrests, before the protesters eventually got tired and returned to camp. Many of the protesters were very clearly new to all this and did not have any background in demonstrations. For some of the ordinary Tel Avivis, this was clearly the first time they blocked a street in their lives.

Back in camp, activists pulled out guitars and sang “My Girl” and “Stand By Me,” while a discussion wore on about police union rights and non-violent technics. In-between the camps and the slumped down activists, a couple danced back and forth, duelling with life-size lightsabers, while one of the activists obligingly provided the “Bzzzz” every time the Star Wars blades made contact. How can you not love this place.

It’s half past four a.m. here so I won’t get into a proper argument with Dahlia. I’ll only venture the fact that it’s perfectly understandable people care more about their rent and professional future than about the boycott law, and if this concern spurs them into completely unprecedented action, I don’t see any reason to complain.

UPDATE: 43 people were arrested by police following the demo.

Dahlia reports on the demonstration preceding the clash:

The demonstration on Saturday night in Tel Aviv spearheaded by the housing tent-protest leaders, had everything in it but the kitchen sink. Among the over ten thousand who attended, as reported by Haaretz (since I’m not much of a crowd-counter), there were representatives from the housing protestors, feminist groups, social workers, teachers and probably doctors or medical residents too, also striking this week, although I can’t be sure; the speakers on the stage in the plaza outside the Tel Aviv Art Museum (Rabin Square is under renovation) even remembered to mention elderly Holocaust survivors, and everything was translated into sign language. The only thing missing was, for me, the critical thing: a strong cry in support of democracy, rejection of the boycott law and every other legislation to threaten our freedom. Ah, yes, and a coherent message in general.

The crowd was huge, angry and wanted to show it. The feeling was markedly different from the calm, jovial familiarity of the more intimate left-wing gatherings: the enormous surge of people  stalking up Ibn Gavirol Street in central Tel Aviv to the museum was sweaty, hyper, young and noise-making – music, drums, groovy dancing and all.

But the message, the message. A rundown of the signs and chants gives a sort of vague composite picture of a cry for socialism, especially if you take a few steps back and don’t look for fine resolution or details. The most common cry was “Welfare state!” and the demand for public housing. A sign that seemed ubiquitous said: “the market is free – are you?” Here were some others, signs and chants and slogans:

Danger, construction – for the rich

Bibi, wake up – women are more valuable (this rhymes in Hebrew)

The people are calling for social justice

The answer to privatization? Revolution!

The theme that “we’re all together,” was repeated, well, repeatedly. It’s nice to feel something that unites Israelis of various stripes that isn’t security related. I certainly don’t mind hearing the accompanying calls to fire Netanyanu.

But it’s a shame that nobody dared raise the conflict, the source of so much social malaise in Israel.  It’s a shame that the promised demonstration to defend Israeli democracy seems to have been swallowed up by this and not a single sign or voice protested the boycott law, which might be a slippery slope towards ending our very right to protest, that I saw. “The government against the people and the people against the government” really doesn’t say enough to stem the tide of anti-democratic trends and legislation.

Despite efforts of Communications Minister Moshe Kahlon on this evening’s news to give the demo a “hechsher” (kosher certificate) by saying it might be left, right or center and even the New Israel Fund could support it, which would be fine with him – still, I didn’t see many representatives of right wing parties or organizations. Maybe I missed them.  There were, however, representatives of Hadash and Meretz who were impossible to miss, and I saw Naomi Chazan walking around looking pretty pleased, as well as one sign saying: “settlers and Haredim, the mother of all sins.”

More on this issue:

Everything in this land is about real estate: Understanding the tent protests / Noam Sheizaf