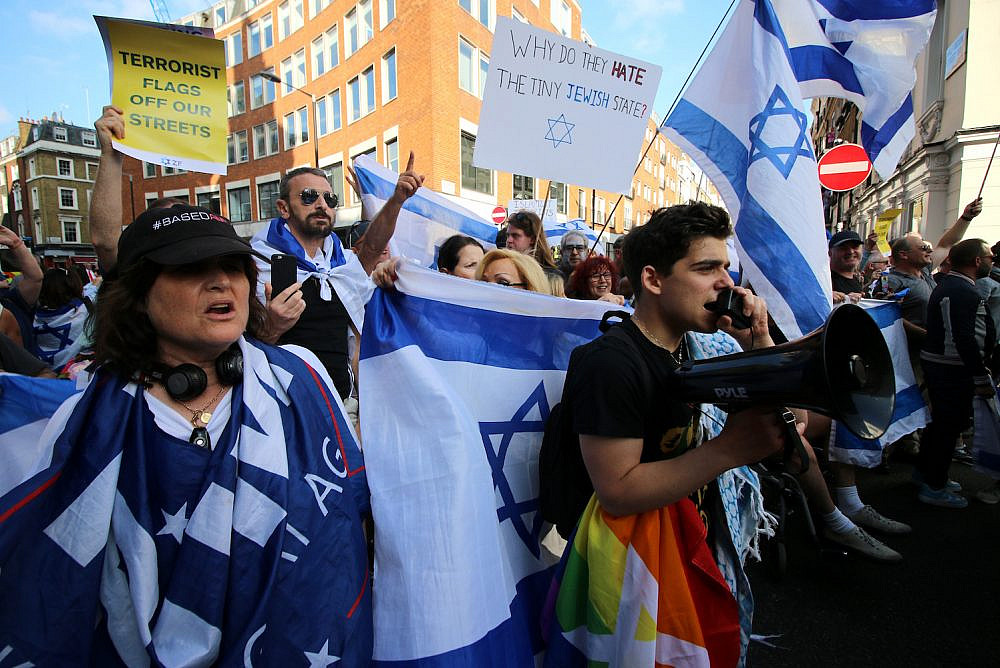 Pro-Israel supporters try to interrupt a march attended by thousands of people in the streets of London, against the celebration of 100th anniversary for of the Balfour Declaration November 4, 2017. (Ahmad Al-Bazz/Activestills)

It’s not easy being the public representative of an anti-democratic regime. Tzipi Hotovely, Israel’s controversial ambassador to the U.K., learned that the hard way last week when she faced protests again following a speaking engagement at the London School of Economics and Political Science (LSE). A video went viral of Hotovely dashing to her diplomatic car, escorted by her security detail and clutching a bouquet of flowers while student protesters booed at her from the sidelines, asking her if she was “ashamed.”

The protest was organized by student Palestine solidarity activists who said that there was “no place for a Nakba denier and anti-Palestinian racist like Hotovely on campus.” Hotovely, who in her first few months as ambassador, called the Nakba — the expulsion and flight of hundreds of thousands of Palestinians from their homes during the 1948 war — “an Arab lie” during an event organized by the Board of Deputies of British Jews, and who previously served as former Prime Minister Benjamin Netanyahu’s minister for settlement affairs, is a clear proponent of both permanent occupation and the denial of Palestinian human rights.

Yet the public response that came following the protest against her appearance at LSE is a worrying example of how spurious claims of antisemitism are being weaponized not only to shut down legitimate protest of Israel’s actions, but also to further an illiberal and authoritarian crackdown on freedom of speech and human rights.

Immediately following the release of the video, the U.K. hasbara machine began churning. The Jewish Chronicle, the U.K.’s oldest and perhaps most widely-read Jewish newspaper, described the protest as a “Jew hunting mob on the streets of London,” and jumped at the opportunity to draw parallels with Kristallnacht, on whose anniversary the protest took place. The following day, in an alarming moment of rehabilitating fascism for a mainstream British audience, the Chronicle’s deputy editor went on LBC, a leading radio station, and declared that it is open for debate whether the Nazis were left-wing or right-wing. Senior politicians, in turn, declared the protest an antisemitic incident and called for harsh repercussions for those who protested, including opening a police investigation into those present at the demonstration. This comes weeks after the draconian Police, Crime and Sentencing Bill, which introduces severe restrictions on the right to protest passed its second vote in the House of Commons.

Conflating criticism of Israeli political figures with antisemitism is nothing new, nor are protests against their appearance on university campuses. But the speed and consistency with which Jewish communal figures and, more alarmingly, the British political establishment condemned these protests as antisemitic should be a wake up call. 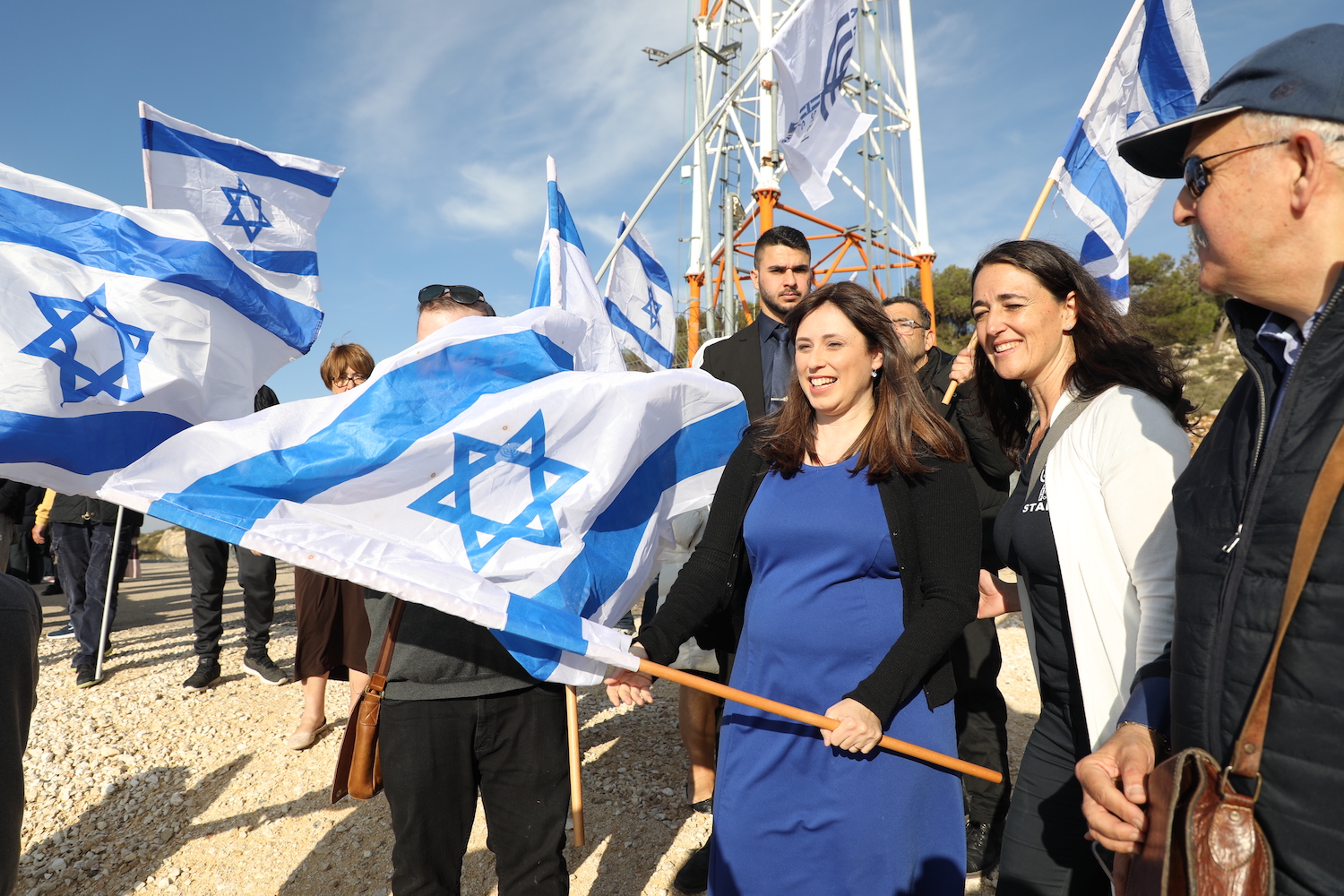 The reaction to the Hotovely protests can be seen as part of a broader strategy being led by pro-Israel groups to shrink the space for open discussion about the occupation and Israel-Palestine. Israel has been facing increasing international criticism over its treatment of Palestinians, as has been made even clearer over the past few weeks with stories of state-backed settler violence, the designation of Palestinian human rights organizations as “terrorists,” and the selling of spyware technology to authoritarian regimes around the world. Now Israel and its supporters are trying to shut down the conversation entirely.

The weight that such accusations of antisemitism now carry has been bolstered by the widespread adoption of the International Holocaust Remembrance Alliance (IHRA) definition of antisemitism, what has received significant criticism for its use to silence Palestinian human rights advocacy and conflating anti-Zionism and antisemitism. The U.K. has also been subjected to a prolonged antisemitism fiasco that has plagued the country’s political discourse for the past six years — most notably in relation to the Labour Party. The real motivation for many of the loudest proponents of mass adoption of the IHRA definition was encapsulated in a tweet from one prominent British Jewish academic, arguing that “violence towards the state of Israel is violence towards us all.”

Meanwhile, as opposition to the occupation and support for Palestinian human rights becomes more mainstream, the Jewish communal establishment clings to its outdated and delusional ideas of what it thinks Israel is, namely “the only democracy in the Middle East,” while ignoring the belligerent and unjust occupation it continues to perpetuate. In doing so, it aligns itself with the far right in the U.K. and in Israel, positioning our community in opposition to values of equality, human rights, and justice.

Hotovely has been warmly embraced by the Jewish communal establishment in the U.K., with her well-documented bigotry rarely scrutinized or challenged. Instead we have been treated to Zoom conversations about how she “girl bossed” her way to becoming ambassador such as that held with the Alliance of UK Jewish Women’s Organisations in March. Despite Hotovely representing the antithesis of the kinds of values that our community should be embodying — and, indeed, often claims to embody — our communal leaders continue to defend one of the Israeli far right’s foremost advocates of permanent rule over Palestinians rather than being part of building a broad coalition of progressive Jewish and non-Jewish organizers who reject her racism and Jewish supremacy. So long as this remains their choice, they have surrendered any moral authority they may wield to talk about combating racism and antisemitism. 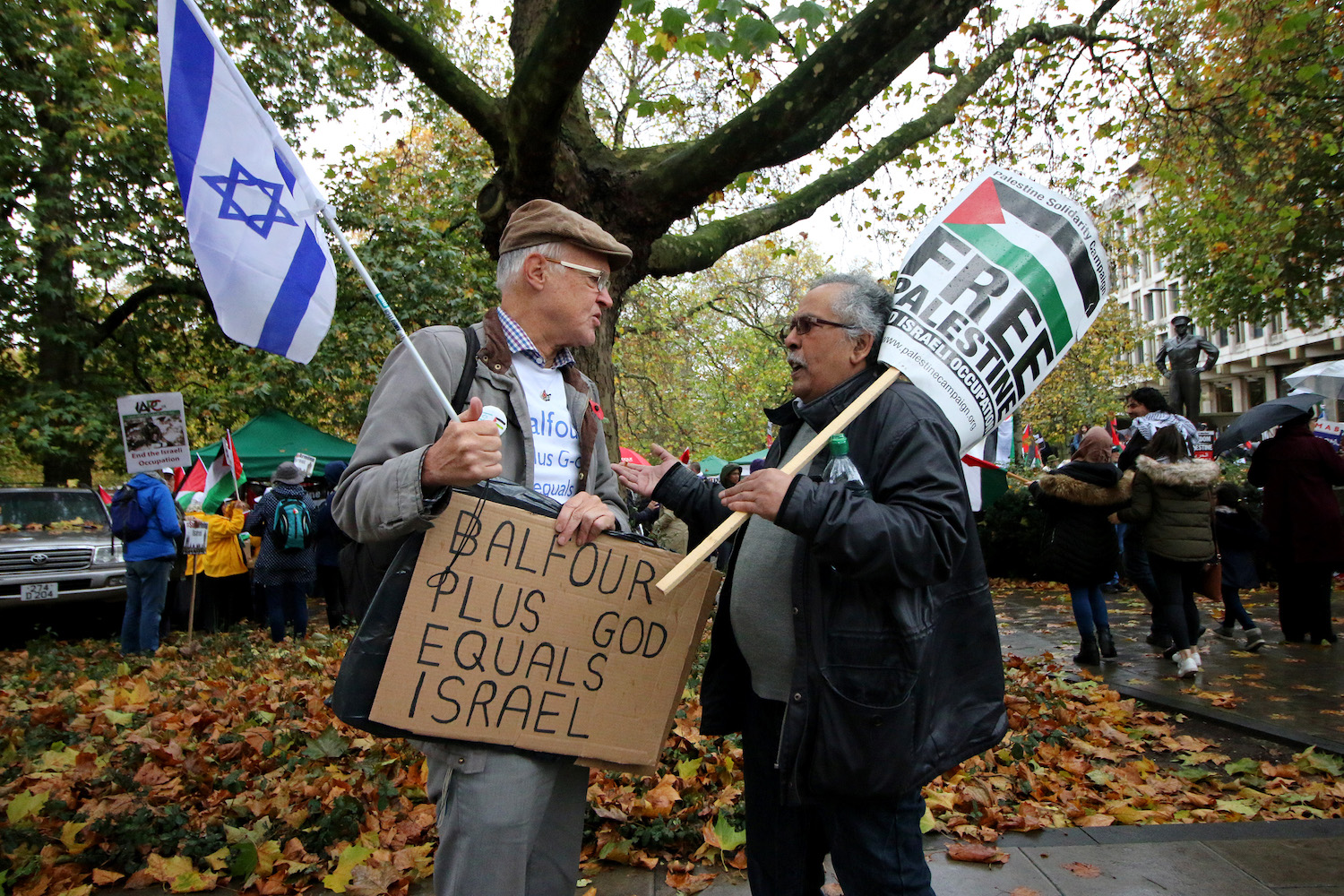 Thousands march in the streets of London against the celebration of the 100th anniversary of the Balfour Declaration, November 4, 2017. (Ahmad Al-Bazz/Activestills)

The Jewish communal establishment has spent the last six years aligning itself with the far right in order to distinguish antisemitism as a unique evil compared to the oppression experienced by other racialized and marginalized minorities who face similar or higher levels of prejudice in the U.K. Thanks to this, far-right politicians like Home Secretary Priti Patel can now use the notion of “combating antisemitism” as a shield for pushing through policies that target the right to protest and freedom of expression, which risks further ostracizing the Jewish community from our natural allies among other marginalized communities. The U.K. government also intends to introduce it’s Boycott Bill in early 2022, which will see a ban on public institutions implementing boycotts of products from different countries for political reasons — a move that has been continuously justified in the name of fighting antisemitism.

Although the targets may differ from country to country, the right’s strategy for weaponizing antisemitism is global. Therefore, Jews around the world have a duty to try to stop the populist right from succeeding in this mission, and to organize in our own Jewish communities to influence the wider public discourse. We have a responsibility first and foremost to take a stand in solidarity with Palestinian organizers and activists who are fighting for justice and equality, to call out the weaponization of antisemitism, and to challenge the moral and political authority that our communal institutions hold. This means developing a sharper understanding of antisemitism that allows for greater clarity on what is real antisemitism — which is never acceptable — and what is legitimate and necessary opposition to Israeli policies or politicians.

Doing this work would not only enable us to build better relationships and networks for broader organizing, but would also hold our communal leaders to account when they instrumentalize real Jewish fears for a far-right political agenda. Because, in the words of Israeli human rights lawyer Michael Sfard: “If everything is antisemitism, then nothing is.”

Em Hilton is a Jewish writer and activist living between Tel Aviv and London. She is the co-founder of Na'amod: British Jews Against Occupation and sits on the Steering Committee for the Center for Jewish Non-Violence.
Since you’re here…