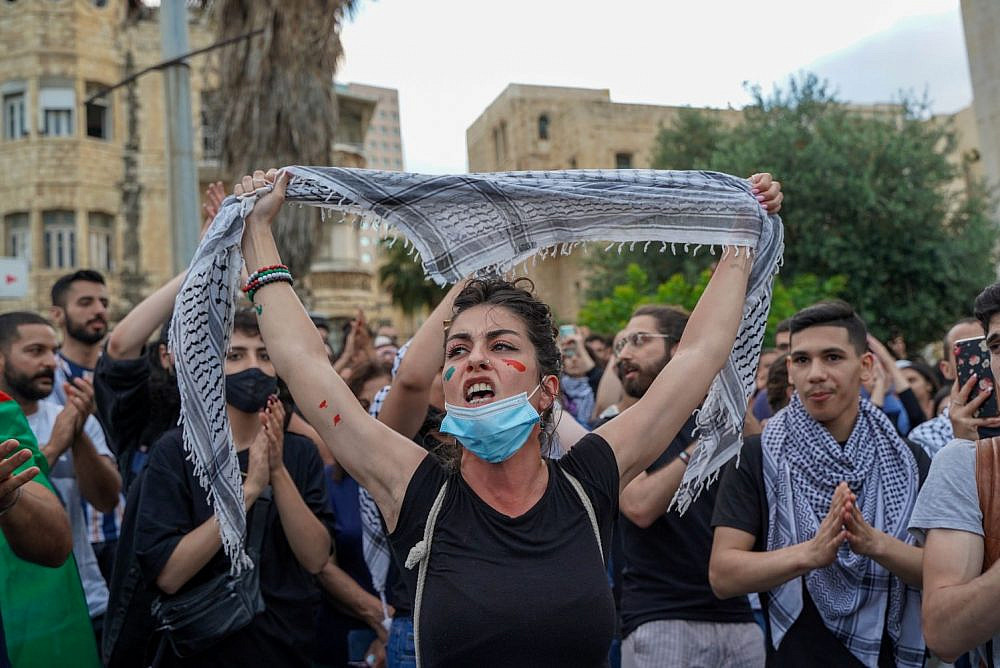 Palestinians demonstrate in Haifa during a general strike to protest Israeli state violence against Palestinians, May 18, 2021. (Maria Zreik/Activestills.org)

Last June, an Israeli Jew, Ya’akov Cohen, was convicted of violently assaulting Said Musa, a Palestinian citizen of Israel, in the coastal city of Bat Yam during the unrest of May 2021. The prosecution sought a sentence of 4-7 years for Cohen, 31, who kicked Musa while he was lying helpless on the ground after having been dragged out of his car by several Jewish assailants, including Cohen. But the judge decided to sentence him to only 15 months in prison, justifying his ruling by arguing that Cohen “believed in the moment that the victim of the crime [Musa] was trying to carry out a car-ramming attack.”

At the end of November, an Arab man, Adham Bashir, was convicted of taking part in an attack on Mor Janashvili, a Jewish Israeli, in Akka during the same period in May 2021. The prosecution requested that Adham Bashir, who threw a stone at Janashvili’s car and broke its windshield in a group attack, be sentenced to 10-13 years; the three judges agreed to the request and sentenced him to 10 years in prison. The judge explained: “This was an ugly and dark attack that requires significant punishment.”

This sense of discrimination is reinforced by the fact that the prosecutor’s office decided not to file charges against Jewish Israelis who were suspected of involvement in the shooting of Musa Hassona in Lydd/Lod in May 2021. At the same time, seven Arabs from the same city were indicted for the killing of Yigal Yehoshua, after they admitted to throwing stones at his car.

According to data collected by Mossawa Center, a Haifa-based human rights organization, the police and the Shin Bet have arrested about 3,600 Palestinian citizens since the events of May 2021. Around 360 of them were indicted, and more than 100 were convicted and actually sent to prison. There is still no decision in the rest of the cases, and the accused are under house arrest or in detention until the end of the proceedings. According to Mossawa, in cases where appeals were filed, the Supreme Court increased the sentence. 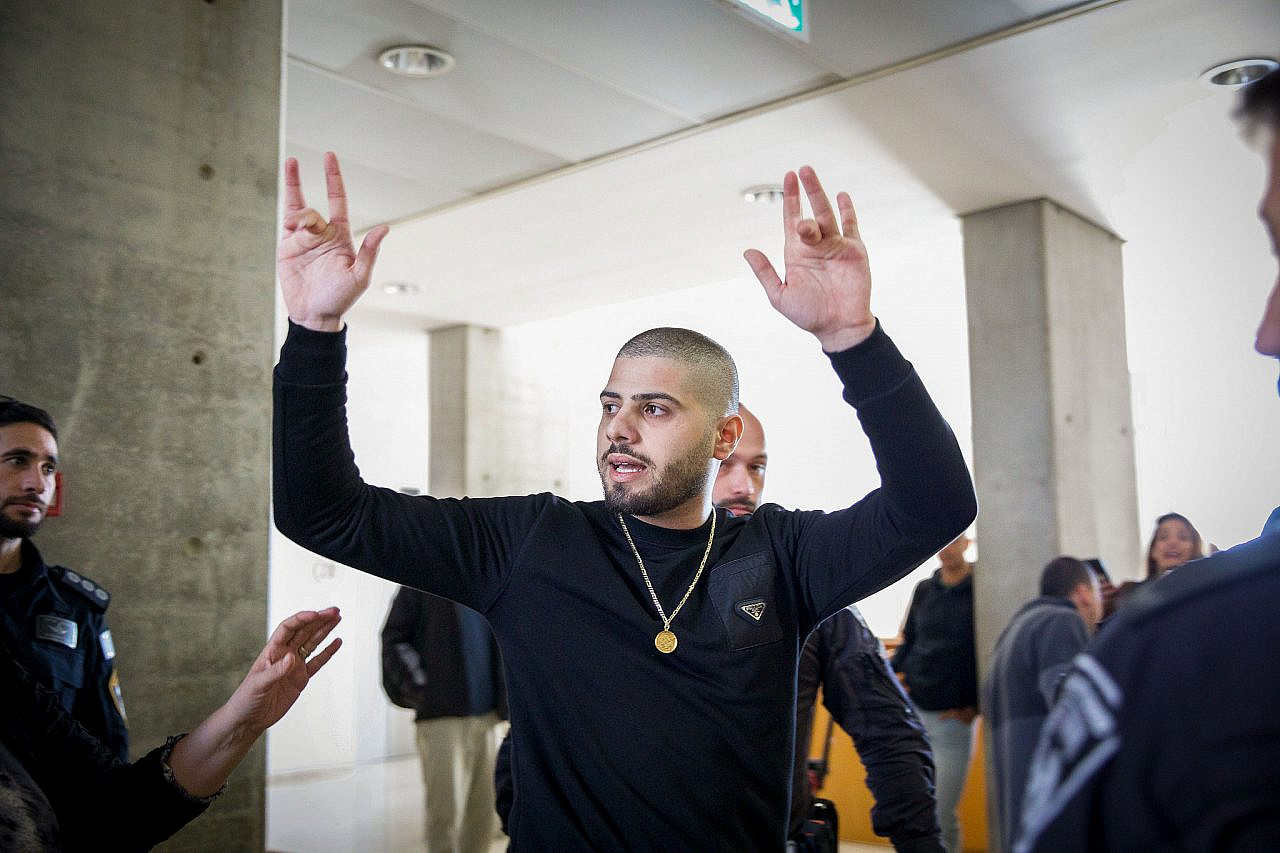 Adham Bashir, who was convicted of taking part in an attack on Mor Janashvili in Akka during the May 2021 unrest is seen after a court hearing in Haifa, November 28, 2022. (Shir Torem/Flash90)

There are no exact figures regarding the number of Jews who were convicted following the events of May or the sentences imposed on them, but it is clear that there are very significant disparities. Data provided in June 2021 to Aida Touma-Suleiman, a Knesset member from the left-wing Hadash party, showed that the prosecutor’s office requested the arrest of 190 Palestinian citizens and 17 Jewish citizens as a result of the unrest. The Al-Mezan Center for Human Rights, meanwhile, reported that 77 percent of indictments for crimes of incitement to violence and racism filed by the prosecutor’s office in recent years were filed against Arab citizens.

There is no data on the average sentences imposed on the Arabs who were convicted, but based on recent cases, they appear severe. For example, at the end of last month, four residents of the northern town of Tamra received prison terms of between five and seven years, after they were convicted of throwing stones and beating a Jewish Israeli who entered Tamra during the May events. Unusually, the Jewish man, Shir Alkalay, actually requested that his attackers receive a lighter sentence after signing a traditional “Sulha” (forgiveness) agreement with them, but the court ruled that “the harm to the public interest must be considered more broadly here… the personal security and right to freedom of movement of the Jewish population are damaged to the core.”

Another sentence that attracted the attention of the Arab public was the 15 years imposed on Muhammad Agbaria, a resident of the village of Mu’awiya near Umm Al-Fahm. Agbaria was convicted after confessing to firing a gun — which he held without a license — at police officers at the Ein Ibrahim intersection in Wadi Ara, as well as throwing bricks at police and Shin Bet officers from the roof of his house when they came to arrest him the next day, injuring them. His family claims that the confession was extracted from him by force.

Agbaria was convicted of attempted murder, assault, wounding, and illegal possession of weapons and ammunition. However, many Palestinians in Israel have pointed out that when defendants who belong to criminal organizations in Arab localities are convicted of carrying weapons, their sentences are far lighter.

10 years for Palestinians, 15 months for Jews

Sabrin Bashir, the mother of Adham, who was sentenced to 10 years in prison for his involvement in the Akka assault, said that the events that night took place near their home, when her son returned from work at his barber shop. According to her, a Jewish man rammed his car into several Arab youths, and her son “went to see the youth who was run over and he was a relative of ours.” 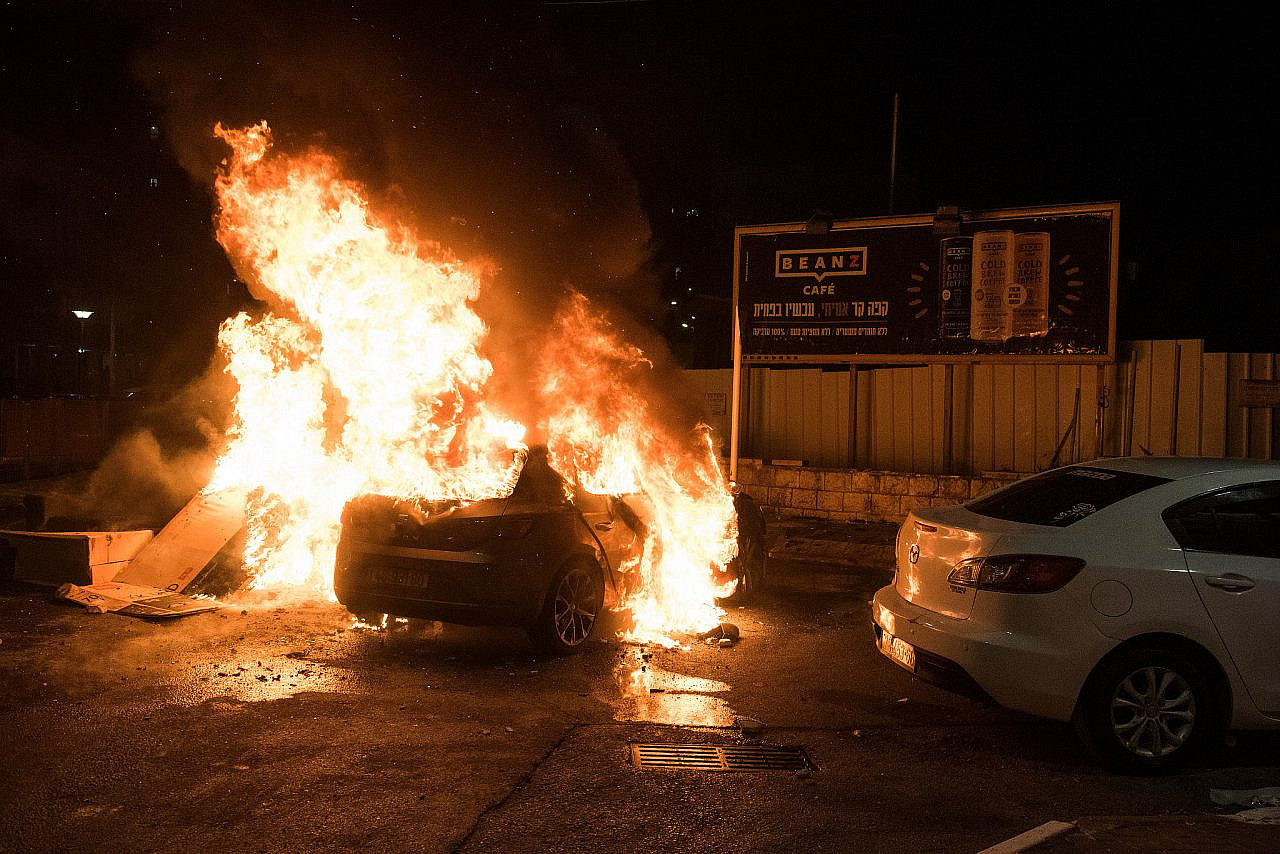 A car is set on fire during violent confrontations between Palestinians and Jews in Akka, northern Israel, May 12, 2021. (Roni Ofer/Flash90)

Bashir told +972 that the day after the incident, police arrived at her son’s barber shop and arrested him. “We were prevented from seeing him for several months,” she explained. “They kept telling us that the indictment talks about throwing a stone at the ramming vehicle, even though the driver got out of it and fled. Do you get such an indictment for throwing a stone at an empty vehicle? The sentence does not match the act.”

According to the mother, her son was released to house arrest, and his lawyer told the family that at worst the punishment would be community service. “After that, the lawyer started saying that the situation got worse and the punishment could be two years,” she continued. “In the worst-case scenario we didn’t expect a 10-year sentence and a fine of NIS 150,000. We left [Akka] to rent in Shefa-Amr with our son, because he was banned from the city. We had two very difficult years and we paid a lot of money, but it was not important because we just wanted Adham to be released, and this is what we got.”

Bashir also criticized the Palestinian leadership in Israel. “No Arab leader spoke to us, neither Knesset members nor Arab officials in the Akka municipality or anywhere else. Nobody helped us,” she said. “Some of them contacted us after the verdict and said they would help us, but we still haven’t heard anything. I am contacting them now. Adham is your son too, not just mine; you protect our interests, and you must follow my son’s case.”

Ilham Agbaria, Muhammad’s sister, said that they had not expected he would receive such a severe sentence. “Fifteen years is like a life sentence,” she said. “Muhammad is married with a son and daughter. I cannot imagine his kids growing up without him.”

Ilham said that her brother had been in detention for a year-and-a-half before being sentenced. “We’re appealing to the Supreme Court, but we don’t expect his sentence to be reduced,” she said. “Criminals and murderers aren’t sentenced to 15 years, but when a guy goes out and shouts about respect for him and his people, he gets such an unjust punishment. They want to turn whoever protested into an example for the younger generations.”

“We see how they punished Jews who attacked Arabs, and how they punish armed criminals in our society,” said Nassim Qabha, Agbaria’s son-in-law. “They think they can prevent youths from going out to protest the next time, but it won’t help them, because force doesn’t work against our people.”

At the end of last week, an Israeli court handed down surprisingly light sentences on Muhammad Al-Awar and Muhammad Hassuna, two young men from Lydd who were convicted of shooting and setting cars on fire in during the May violence (Al-Awar received 18 months while Hassuna was sentenced to 38 months). One of the explanations was that Muhammad Hassuna is the cousin of Musa Hassuna, who was shot and killed by an Israeli Jew during the riots. 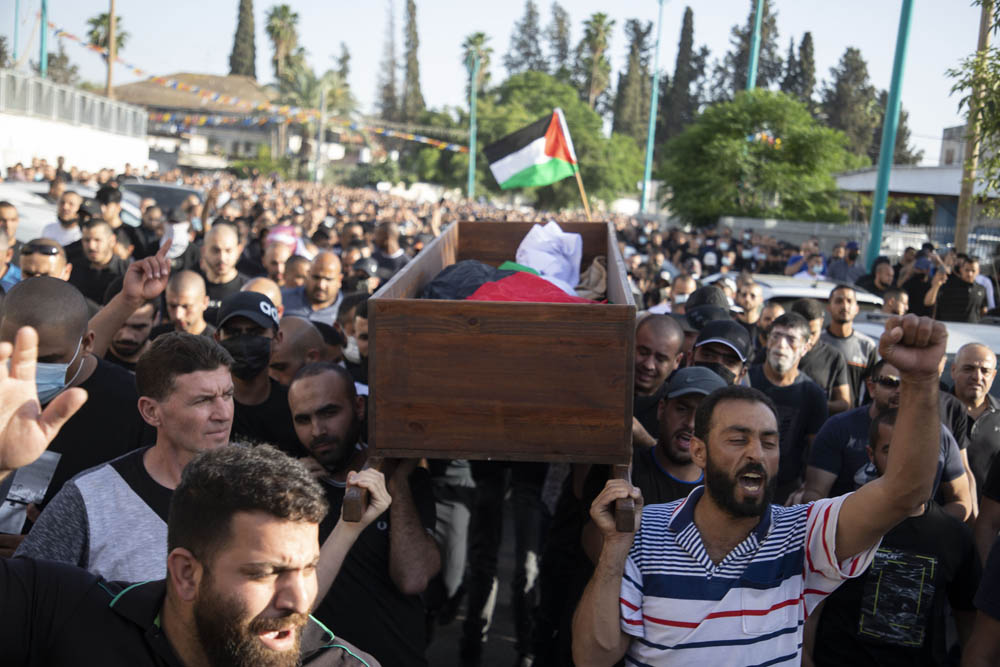 Hundreds of Palestinians hold a funeral for Musa Hassuna, who was shot dead by a Jewish Israeli during protests in the city of Lydd/Lod, May 11, 2021. (Oren Ziv)

Meanwhile, at the end of last week, dozens of mothers from the Sheikh Jarrah neighborhood of East Jerusalem organized a protest in front of the Jerusalem District Court, where the mother of prisoner Bilal al-Jabari said that her 19-year-old son has been detained for a year without trial, with the prosecution demanding an eight-year prison sentence. “The authorities insist on unfair punishments against young people, despite the daily harm to the residents of Sheikh Jarrah from settlers, all under the auspices of the police,” she said.

Balad chairman Sami Abu Shehadeh, who took part in the Jerusalem demonstration, said that the “unfair rulings are a clear testament to the fact that this system is part of Israel’s apartheid regime, which allows the murderers of the shahids (martyrs) Musa Hassuna and Muhammad Qiyan (a Palestinian citizen of Israel who was killed by undercover police in Umm al-Fahm in May 2021) roam free, while the victim who protected his home is being put on trial.”

According to Al-Mezan, although there are similarities in the details of the indictments filed against Jews and those filed against Arabs, the sentences against the Arab defendants “were specifically tailored to punish young Arabs for their participation in the events of May 2021. This is a double standard between Jews and Arabs in rulings on indictments regarding national issues… the severe punishments are a dangerous precedent and indicate that the Israeli justice system is racing toward extremism and discrimination.”