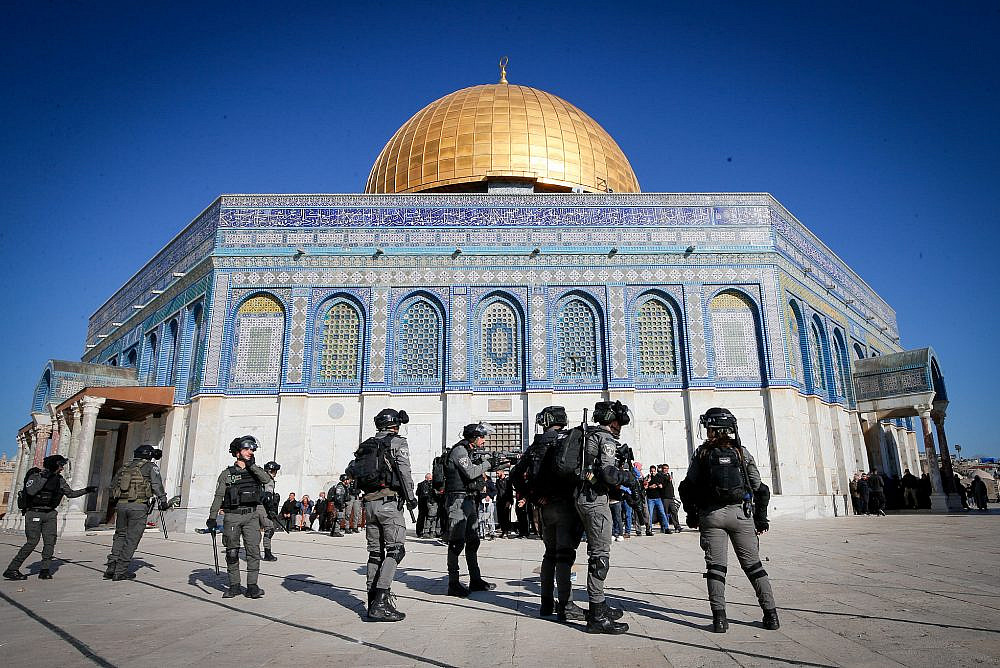 Israeli security forces in front of the Dome of the Rock during clashes with Palestinian protestors on the holy month of Ramadan at Al-Aqsa mosque Compound in Jerusalem's Old City, April 15, 2022. (Jamal Awad/Flash90)

From newspaper headlines to social media feeds, the intensification of violence in Israel-Palestine these past few weeks has been widely likened to the scenes that led to the events of May 2021, when a mass Palestinian uprising, a campaign of Israeli repression, and a vicious war consumed the land between the river and the sea.

The comparisons are tempting, and the core issues underlying that period certainly remain unchanged. But to interpret current developments through the prism of last May is not just premature — it clouds our understanding of what is happening on the ground today, and may even blind us to what Palestinians need in this moment.

The “Unity Intifada” was in many ways the outcome of a perfect storm, creating a rare synchronization of Israeli repression and Palestinian resistance that had not been seen on such a scale since the Second Intifada. Despite flashes of similar activities these past weeks, this large-scale synchronization has yet to transpire again. There are many explanations why, and ongoing developments — particularly in light of Israeli police brutality and provocations by Jewish extremists in Jerusalem — could still take a more severe turn. But there is one significant factor that is not garnering the attention it deserves: Palestinians have yet to recover from what happened last May.

Despite the defiant, popular outrage expressed on the streets and on social media, much of Palestinian society is still recuperating from the state and mob violence it experienced last year. This feeling is most acute in the Gaza Strip, where two million people were subjected to heavy Israeli bombardment over 11 days, and who remain stripped of the ability to reconstruct and rehabilitate under a choking, 15-year-long siege. 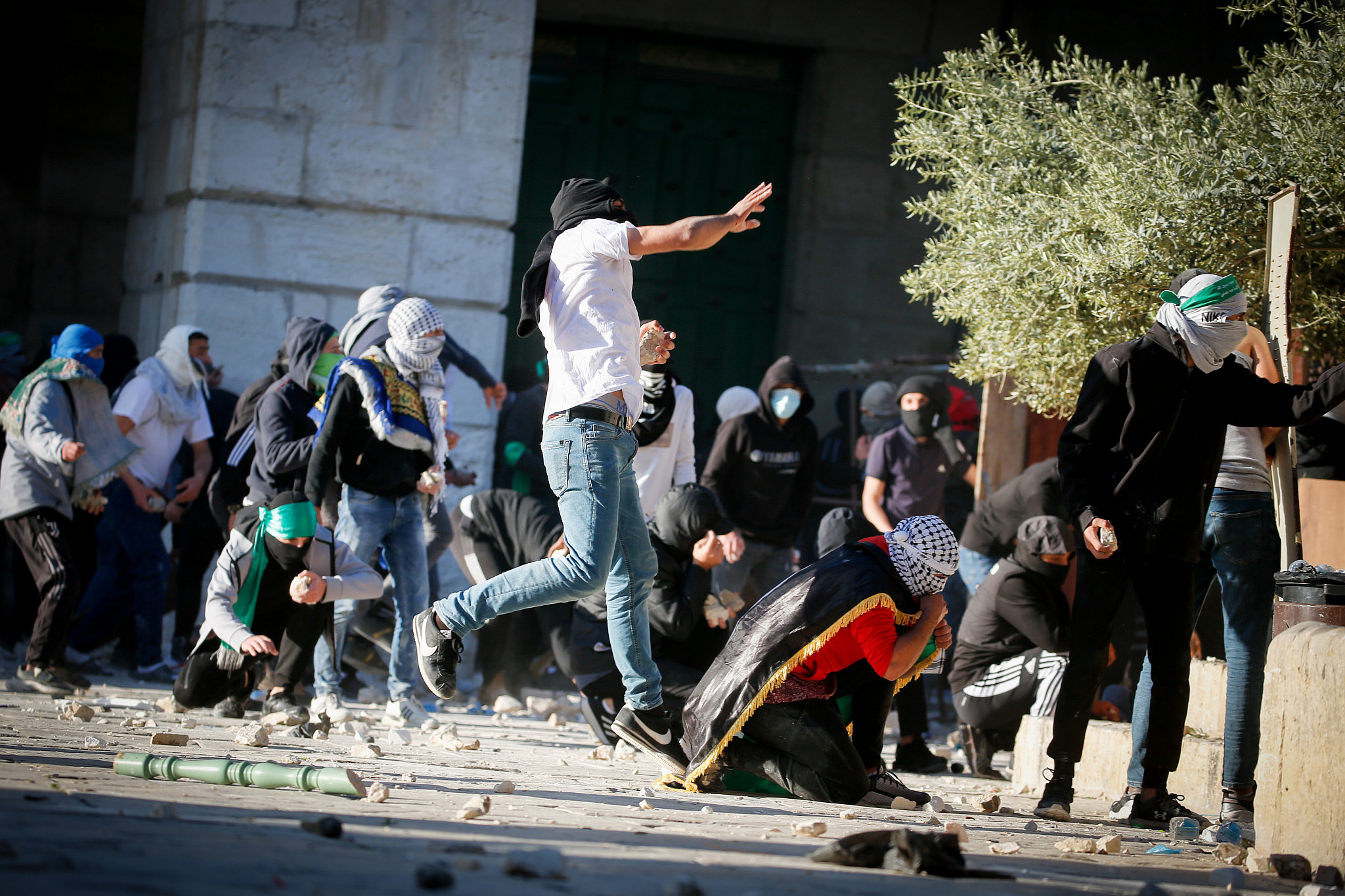 This exhaustion is also felt, to a very different degree, among Palestinian citizens of Israel, who were targeted by an aggressive police campaign in the months after the uprising, and who are still reeling from the horror of armed Jewish mobs attacking Arab neighborhoods and residents. In the West Bank, too, the effort to channel the intifada’s energy against the Palestinian Authority, widely viewed as the occupation’s local enforcer, was violently suppressed by PA security forces and loyalist thugs.

The main reason for the lack of recovery is quite simple: the Israeli brutality never stopped. Since May, Palestinian communities have had to face military incursions, settler assaults, home demolitions, denials of medical permits, army shootings, mass arrests, land seizures, intrusive surveillance, and much more. All of these have certainly escalated in recent weeks, but they have been fluctuating in severity throughout the year, cloaked in the government’s Orwellian doctrine of “shrinking the conflict.”

Indeed, while mainstream media was quick to cover recent acts of sporadic violence committed by Palestinians — including deadly attacks in three Israeli cities, stone-throwing at buses, and now rockets fired from Gaza — it has largely played dumb to the constant, structural violence wrought upon Palestinians in the name of preserving “quiet” for Jewish-Israelis. It is telling that the media only began to notice that violence was “surging” when it suddenly afflicted Israelis; otherwise, the violence was rendered invisible, an inconspicuous detail in the landscape. A ball of fire and smoke rises during Israeli airstrikes in Khan Yunis, in the southern Gaza Strip, April 19, 2022. (Abed Rahim Khatib/Flash90)

None of this has meant that Palestinians have given up on their cause. On the contrary, resistance persists in multiple forms, and the memory of the Unity Intifada continues to fuel a sense of renewed national consciousness. But many Palestinians will also admit that, even if they were able to mobilize like last year, they are not sure what it could achieve in this moment. Still weakened by fractured and authoritarian leaderships, and with no clear political vision to guide them, many Palestinians have had to revert to their fragmented, localized battles to stave off Israel’s relentless policies. As inspiring as the May uprising was, it is hard to say how much it has altered Palestinians’ ability to dismantle their oppression.

This vulnerability can often be obscured amid the exclamations of “unity” and “steadfastness” heard at protests and seen online. They inadvertently flatten the complex experiences and debates within the community which remind us that, for all their extraordinary resilience as a people, Palestinians are still human. We do not always feel strong, heroic, or resolute. We are a society that is scarred, traumatized, and fearful for the future. We are not automated machines that swing between defenseless victimhood and fiery rage. Our energy ebbs and flows, and we, too, need time to heal, reflect, and rebuild.

With Israeli hubris growing and Palestinian wounds festering, another war or uprising may well be on the horizon. But a movement without resources is doomed to wither, and a struggle without direction is fated to be lost. We know that slogans aren’t enough: only a serious recalibration of power — through grassroots organizing, government action, economic independence, media pressure, and more — can shift the tide against our colonial condition. The Unity Intifada was a vital part of that effort. But we still have a long way to go.