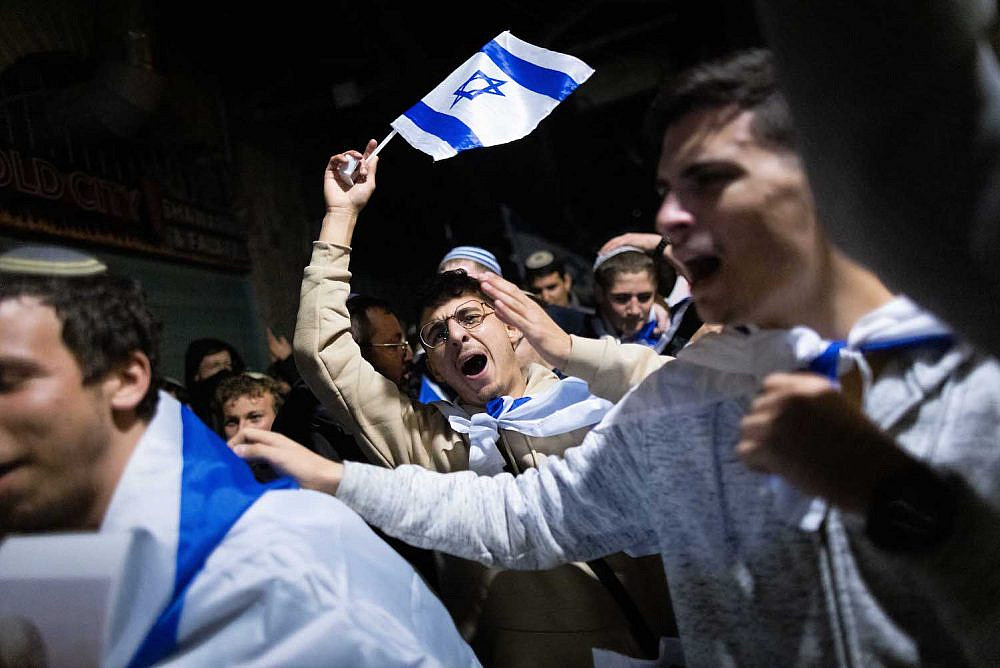 Jewish Israelis march through Jerusalem's Muslim Quarter in response to a shooting attack that killed an Israeli man and wounded four others, November 21, 2021. (Yonatan Sindel/Flash90)

This article originally appeared in the “The Landline,” +972’s weekly newsletter. Subscribe here.

Since its inauguration this past June, the Bennett-Lapid coalition has made overturning the legacy of Benjamin Netanyahu one of its central goals. The new government, they claimed, would no longer be plagued by corruption, cronyism, and a deep derision for the media and the “left.” Many in Israel and abroad viewed the fragile amalgam of far-right nationalists, Islamists, neoliberals, and liberals as a way to steer the ship back to tranquil waters. A return to “normalcy.”

Yet rather than revise its approach toward the occupied territories and the fate of millions of Palestinians living there, the government has decided to inherit and rebrand the policies of its predecessor. Prime Minister Naftali Bennett, per Israeli philosopher Micah Goodman, calls this “shrinking the conflict” — in theory, taking certain steps to decrease friction between the various arms of the Israeli occupation (the military, settlers) and Palestinians by enhancing the latter’s quality of life through a slew of socioeconomic measures.

Goodman’s ideas, which were presented as novel and expeditiously catapulted him into the spotlight as one of Israel’s foremost public intellectuals, are nothing new. For years, Netanyahu promulgated the idea of “economic peace” as a prerequisite for any future political peace agreement. His plan, which was used to swat away pressure to enter into good-faith negotiations with the Palestinian leadership, was itself premised on the thesis of one of his predecessors, Labor’s Shimon Peres, from the halcyon Oslo days: “We are not seeking a peace of flags; we are interested in a peace of markets,” Peres famously quipped.

The thesis has not significantly changed, but the political conditions certainly have. While prime ministers from Peres to Netanyahu faced pressure to reach some kind of deal with the Palestinians, no one seems to be batting an eyelid at Bennett’s open opposition to the two-state solution and attempts to quash Palestinian national aspirations. In fact, many in the international community seem content with his gestures, such as increasing entry permits for Palestinian workers from Gaza and approving housing construction in Area C of the West Bank.

Yet the last few months, and particularly the last week, have shown precisely why — despite all the gestures this government can muster — the conflict cannot be “shrunk.” On Dec. 16, a group of Palestinians murdered Yehuda Dimentman, an Israeli settler, in an ambush in the northern West Bank. The attack took place in Homesh, one of four West Bank settlements that were evacuated as part of the 2005 Gaza “disengagement.” Radical settlers have since rebuilt Homesh as an outpost (which Israel officially deems illegal) and a yeshiva, which have reportedly served as a breeding ground for violent attacks on Palestinians, including the abduction and torture of a Palestinian teenager in August.

Apart from a few lone voices, the Israeli media has completely elided the larger context, let alone stopped to ask itself why Palestinians would resort to violence in the face of settler brutality that is routinely backed by the state. While there is concern among the far-right that Israel will evacuate the outpost, there is nothing to guarantee the settlers won’t return again, or simply build a new outpost on a different hilltop. “We will win,” the brother of Dimentman said after the attack. “It might take us five, 10 or 15 years, but we will return here and everywhere in the Land of Israel.” 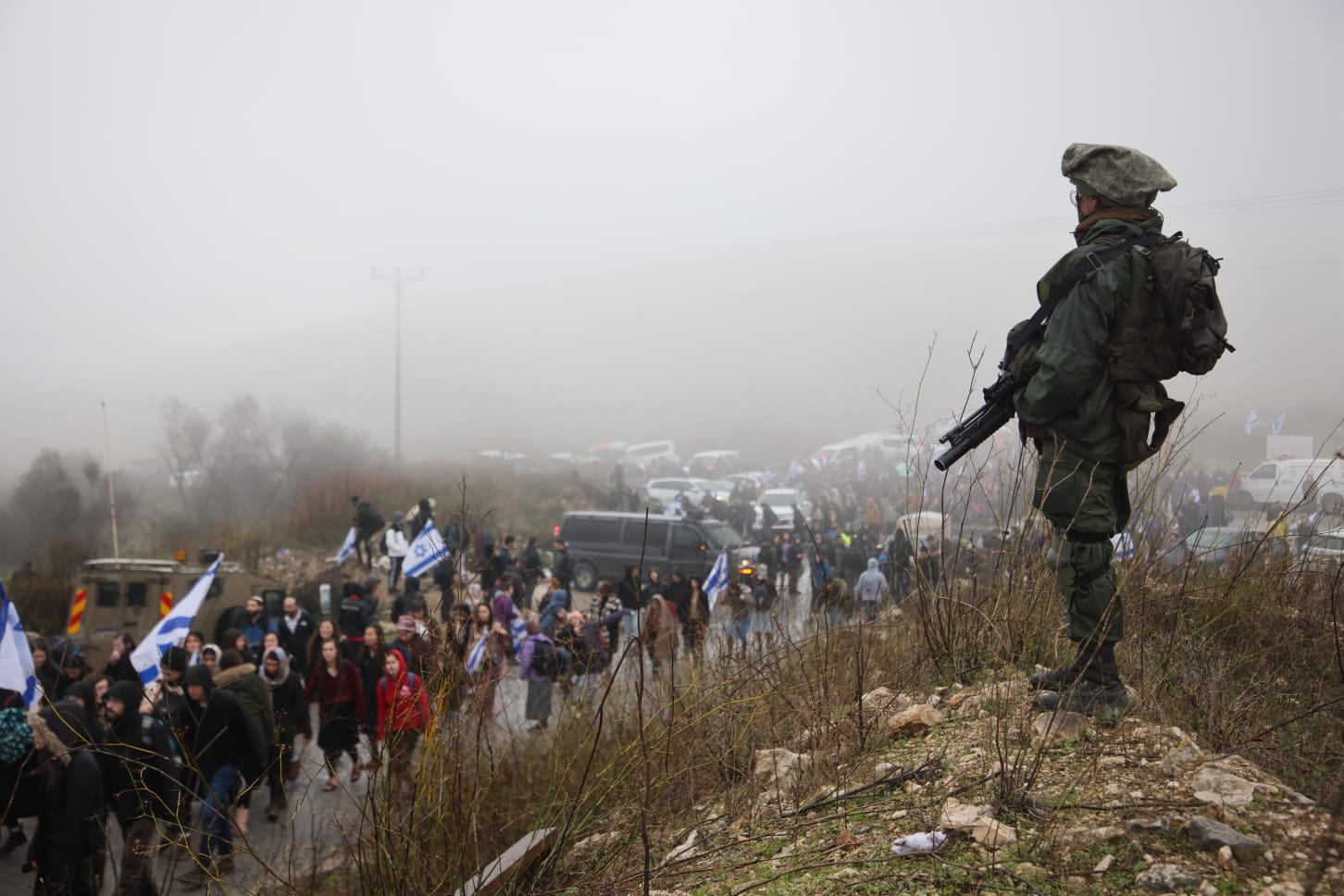 Israeli soldiers guard thousands of settler youth as they march near the outpost of Homesh following the murder of a settler by Palestinians, West Bank, December 23, 2021. (Oren Ziv)

Following the murder, settlers repeatedly rampaged through the nearby Palestinian village of Burqa, attacked Palestinians in the villages of Qaryout and Silat ad-Dhahr, and held a 15,000 person march that was protected by Israeli soldiers and led to closures on the adjacent villages. Meanwhile, dozens of Palestinians in Burqa have been wounded in confrontations with Israeli soldiers over the past week. On Saturday night alone, at least seven demonstrators were hit by live fire in the village.

The murder in Homesh and the rampage in Burqa are only the latest examples of the kind of violence begotten by a reality in which armed vigilantes are given carte blanche to provoke, attack, and plunder Palestinians. It is a reality of settler pogroms, Palestinian resistance, and retributive attacks. It is a reality in which the radical wing of the settler movement has the backing of the most powerful military in the region to violently clear Palestinians off their land, while the settler elite enjoys infrastructure projects that allow Israel to continue swallowing the West Bank piecemeal without ever having to declare “annexation” as state policy.

It is, at the bottom of it all, the story of Israel’s incomplete colonial project — from the South Hebron Hills to the Naqab/Negev to Jerusalem to Gaza. As much as Israeli leaders may say they are tired of “the conflict,” what they really seek is to minimize Palestinian resistance in all its forms, and to shrink any attention to Israel’s ever-expanding ambitions.