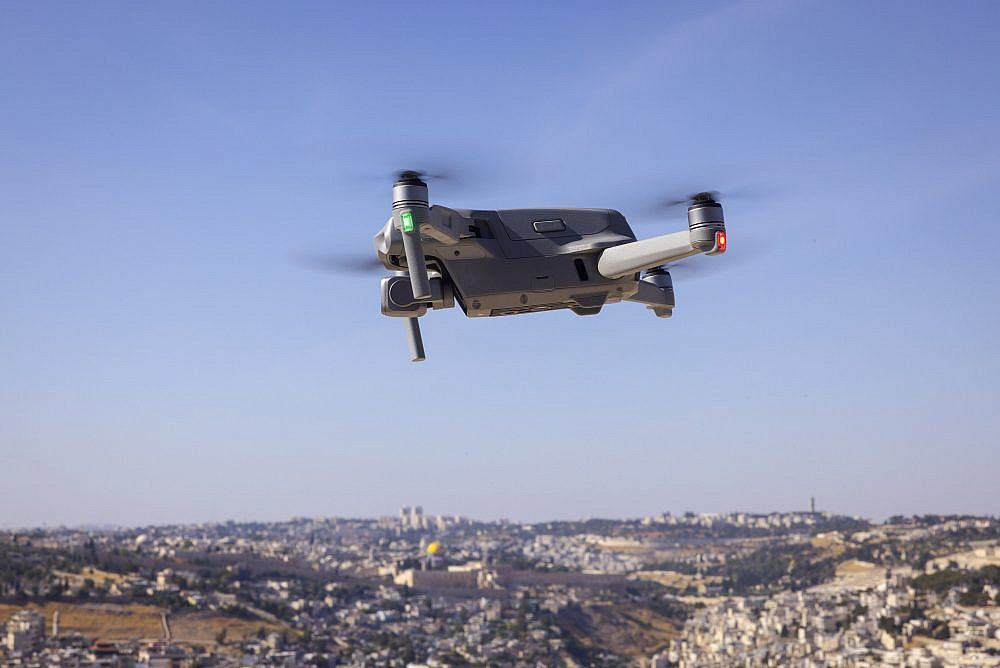 A drone on the lookout point on the Mount of Olives close to Jerusalem's Old City, July 12, 2022. (Nati Shohat/Flash90)

Drone warfare has officially come to the West Bank. On Sept. 29, Israeli media reported that the Israeli army has greenlighted the use of armed drones in the occupied territory, quoting unnamed military sources.

The announcement, foreshadowed a few weeks earlier, came on the heels of an international defense conference hosted by the army, which drew military representatives from around the world to the IDF’s cyber complex in Be’er Sheva. At the event, generals talked up the latest innovations in warfare in air-conditioned rooms, where automatic machine guns and cyberweapons were on display. Outside the building, drones and attack helicopters simulated lethal bombardments over an empty desert landscape, while missiles periodically rained through the hot desert air.

Israel’s political and military leadership say such innovations in automated warfare provide quick fixes to a cycle of violence they deem regrettably chronic. This violence has only escalated over time, with 2022 on track to being the bloodiest year for Palestinians in the West Bank in recent memory.

To solve this so-called “security crisis” — which in reality stems from decades of occupation, foreclosed economic horizons, and fractured political leadership — the army is calling for the use of drones to surveil refugee camps and strike militants, for installing remote-controlled gun turrets to secure high-volume checkpoints, and for employing biometric cameras to track civilians across the West Bank.

In this sense, drones embody a certain fantasy of warfare: compact, sleek, and small, they make killing look less bloody and more technically efficient. It does not matter that this fantasy has no grounding in reality, as evidenced by 17 years of lethal warfare from above in the Gaza Strip. Israel’s military leadership has instead come to believe that automated weaponry — including better cameras, sophisticated algorithms, and more precise missiles — can stand in for a real political strategy, seeding an endless spiral of war.

Israel was an early pioneer in drone technology. In 1968, a major in the Israeli army’s intelligence directorate, Shabtai Brill, attached miniature cameras to the bellies of remote-controlled airplanes — the kind flown by small children in their backyards — to surveil the Egyptian border clandestinely. At the start of the 1982 Lebanon War, Israel Aerospace Industries was churning out military-grade surveillance drones, which could fly alongside fighter jets to identify targets and guide missiles. These technological developments inspired other military superpowers — from the United States to China — to pump millions into manufacturing drones of their own. 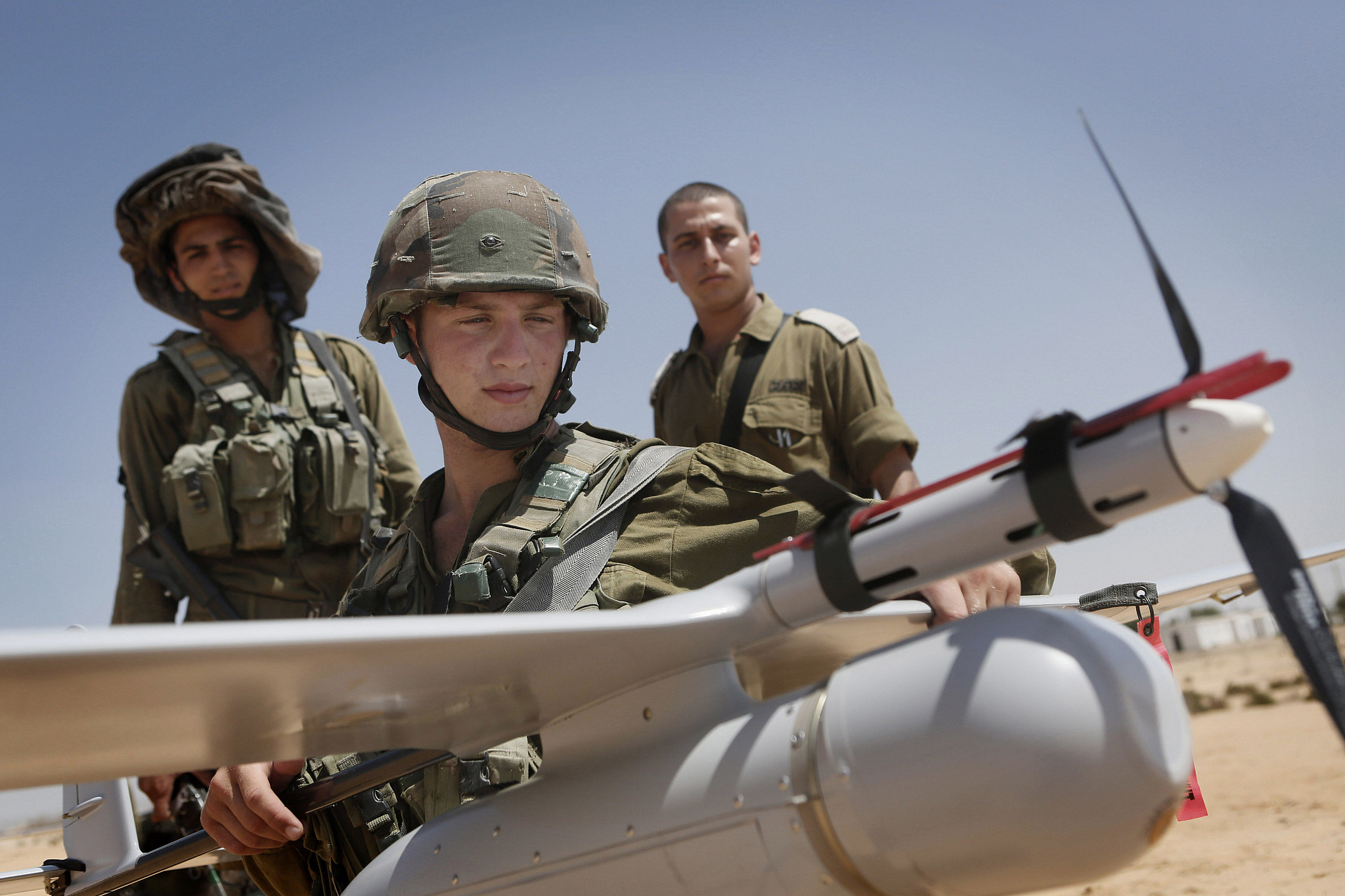 Israeli soldiers of the IDF Sky Rider unit seen during a training drill at the Tze’elim army base, August 5, 2013. (Miriam Alster/Flash90)

By the early 2000s, drones had fundamentally changed how superpowers approached warfare. War was waged from above rather than by troops on the ground. Military personnel thousands of miles away directed unmanned aircraft, outfitted with high-tech image processors and missiles, through a computer screen. Automated weapons reduced troop casualties and made 21st-century wars easier to sustain in the long run, even if the impact on those living in war zones was as devastating and dehumanizing as old-fashioned ground invasions. And so, “forever wars” like the U.S. occupation of Iraq and Afghanistan, or Israel’s siege of Gaza, stretched on indefinitely.

Today, Israel brands itself as a “drone superpower.” Border police operate drones that douse protestors at Al-Aqsa Mosque complex with tear gas. Soldiers in the West Bank disperse crowds from checkpoints with a drone that shoots pulses of sound at targets, leaving protestors dizzy and nauseous. Military intelligence operatives guide reconnaissance drones over Gaza City to determine the exact coordinates to bomb.

Many Palestinians have already lived in the shadow of drone warfare for years. Their presence is so pervasive in Gaza that drones are colloquially referred to as “zanana,” meaning “buzz” — evoking the constant sound of the machines hovering just above one’s roof, like a menacing swarm of bees.

In recent years, Israeli generals have bragged that drones provide the military with “an army without soldiers.” This is mostly illusory, as drones simply draw more soldiers into the work of militarized surveillance and targeted assassinations. In the elite 8200 unit, teams of intelligence analysts parse through information delivered by satellites, CCTV and drone footage, aerial photography, smartphone location data, and decades worth of ground intel. They send their findings to developers in their unit, who use surveillance data to build algorithms that can guide UAVs through the air and determine when a strike should be made.

At the same time, combat units work with intelligence commanders to deploy machine learning systems during attacks on Gaza, Syria, or Lebanon. Advancements in artificial intelligence (AI) have made these systems quite sophisticated. In May 2021, the Israeli army announced that the drones deployed during 11 days of war over Gaza used artificial intelligence rather than human operators to determine when and where a strike should occur. 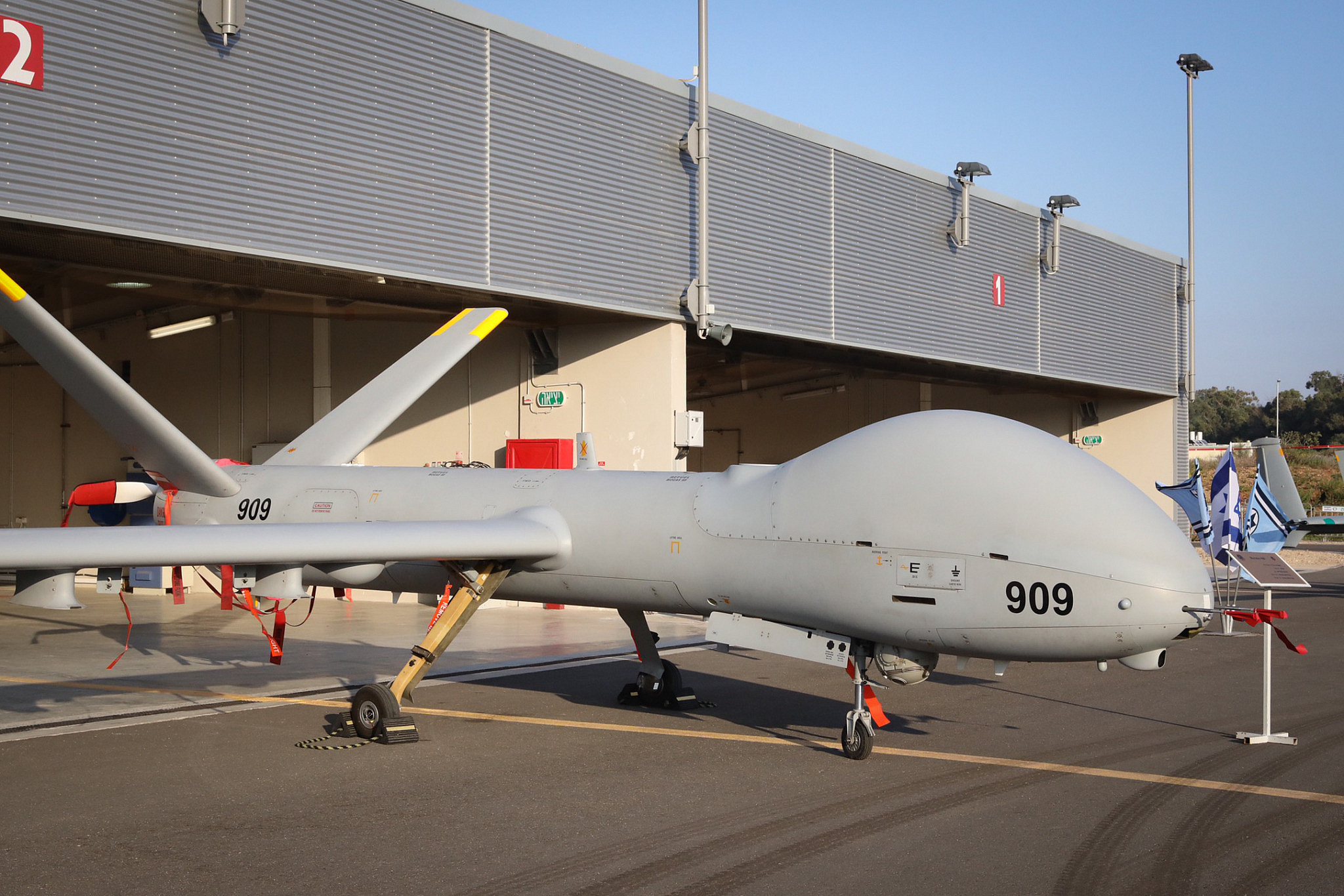 These innovations in killing at a distance have not, however, made the regular bombardments on Gaza any less bloody. Israel’s four major assaults on the strip since 2007 have killed upwards of 4,000 Palestinians — more than half of whom were civilians. When the army announced the first AI-powered drone swarm last year, The Intercept documented 192 Palestinian civilians killed in just 11 days of lethal fighting.

Some were killed accidentally, the army has said, but soldiers in 8200 have also admitted that a certain number of unarmed civilians are killed intentionally during Israeli strikes in Gaza. The army leadership is aware not even the most advanced technology can ensure precise attacks on densely populated urban areas, and as such, “We had rules in the army regarding how many non-combatants were allowed to be killed in Gaza together with those who were targeted for killing,” a recent veteran told +972 Magazine this summer.

Even when drones are not dropping bombs, they are used for near-constant reconnaissance. During the last assault on Gaza this August, armed drones clocked up more than 2,000 hours of flight time during just 66 hours of actual fighting. According to The Times of Israel, “the drones had been scanning the Gaza Strip in the days leading up to the battle,” providing “24-7 reconnaissance.” Their cameras transmit a live video stream documenting life on the ground to intelligence units miles away, where soldiers build up the algorithms to use in the army’s next assault.

The constant presence of drones compounds the trauma of life in a warzone, regardless of whether or not they are dropping bombs. Psychiatrists say many civilians living under drone warfare suffer from a kind of anticipatory anxiety: the terror of wondering if one of the drones flying overhead will strike and kill you, too. As the Gazan journalist Kholoud Balata put it, “at night I am afraid of being blown up, and by day I am told that the place where I live has already been taken off the map.”

The French philosopher Gregoire Chayamou describes drone warfare as “war without victory.” Living under constant siege is so dehumanizing, Chayamou says, that often drone warfare pushes more people to take up arms and join whatever militant organization is being targeted. And so, the aim of drone warfare is quickly reduced to eradicating an ever-growing list of targets, which rationalizes more investments in the very technologies — higher resolution images, quieter engines, and better missiles — that make warfare drag on. 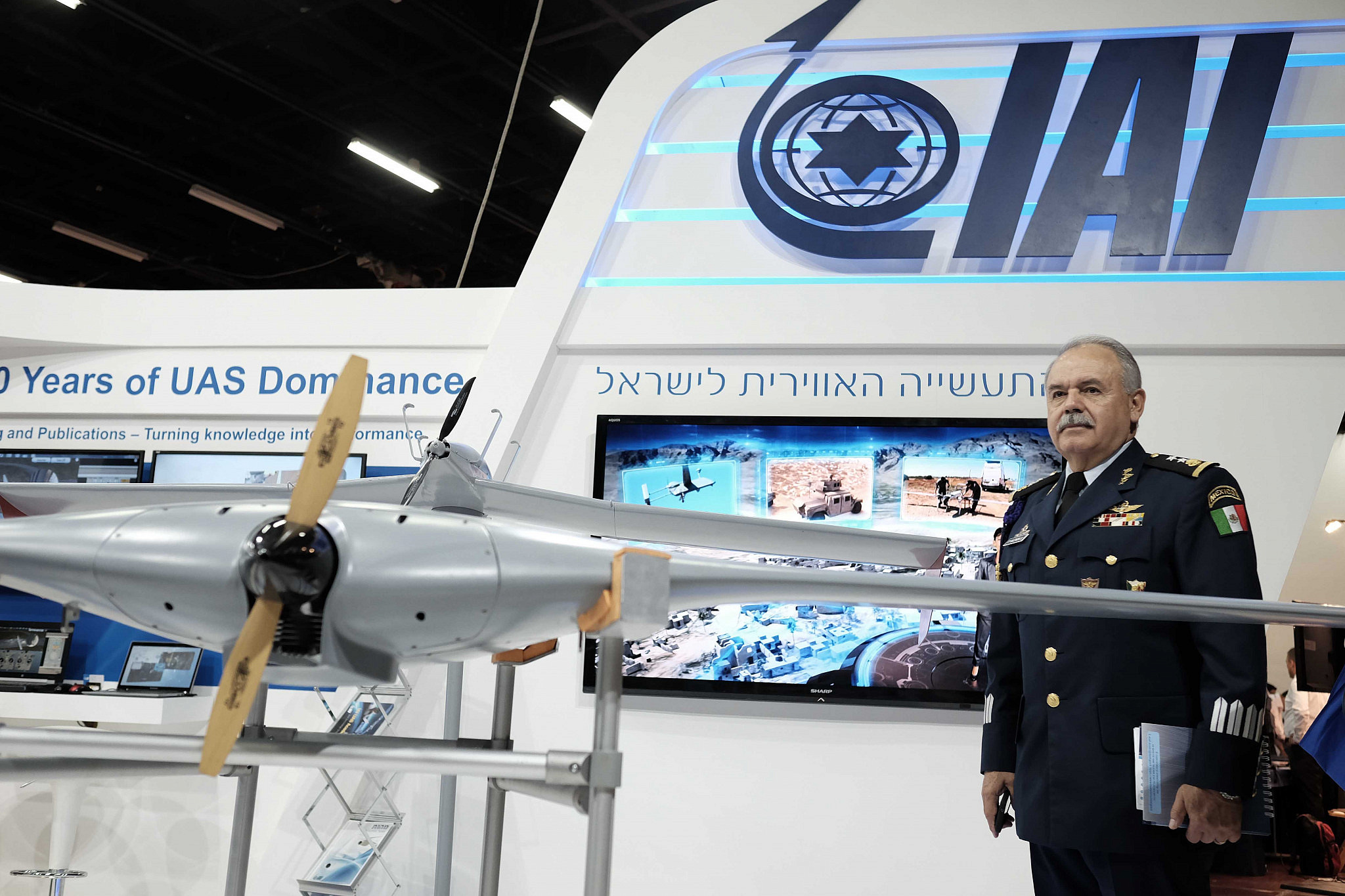 This is certainly what has happened in Gaza in the years following Israel’s 2005 pullout from the strip. A decade and a half of military blockade and repeated wars led to skyrocketing unemployment, climbing poverty rates, and a new generation raised under the constant threat of war. Even Israeli generals have said the humanitarian and political crisis caused by Israel’s blockade is untenable.

Last year, Shlomo Taban, the commander of the Erez crossing that Israel operates at the Gaza fence, said “Gaza should be opened today” so that “Hamas will be severely weakened.” But other generals openly admit that the crisis is part of a concerted military strategy to prolong the war for as long as possible. In 2015, Maj. Gen. Gershon Hacohen, the army chief at the time of Israel’s “disengagement” from the strip, told The Times of Israel he considered Hamas an ally to Israel: “Neither it nor I want a final solution,” he said.

In the West Bank, meanwhile, millions of civilians have long endured the Israeli army’s regular military raids into crowded refugee camps, villages, and major cities; life is continuously upended by restrictions on movement and pervasive surveillance tactics. It comes as little surprise that a fractured Palestinian political leadership and foreclosed economic horizons have made militant organizations more popular than ever. As empty promises of “shrinking the conflict” give way to aerial warfare across the region, one thing is certain: the violence that has already taken so many lives this year is sure to continue, including from above.

Sophia Goodfriend is a Ph.D. candidate in Anthropology at Duke University with expertise in digital rights and digital surveillance in Israel/Palestine.  Twitter: @sopgood.