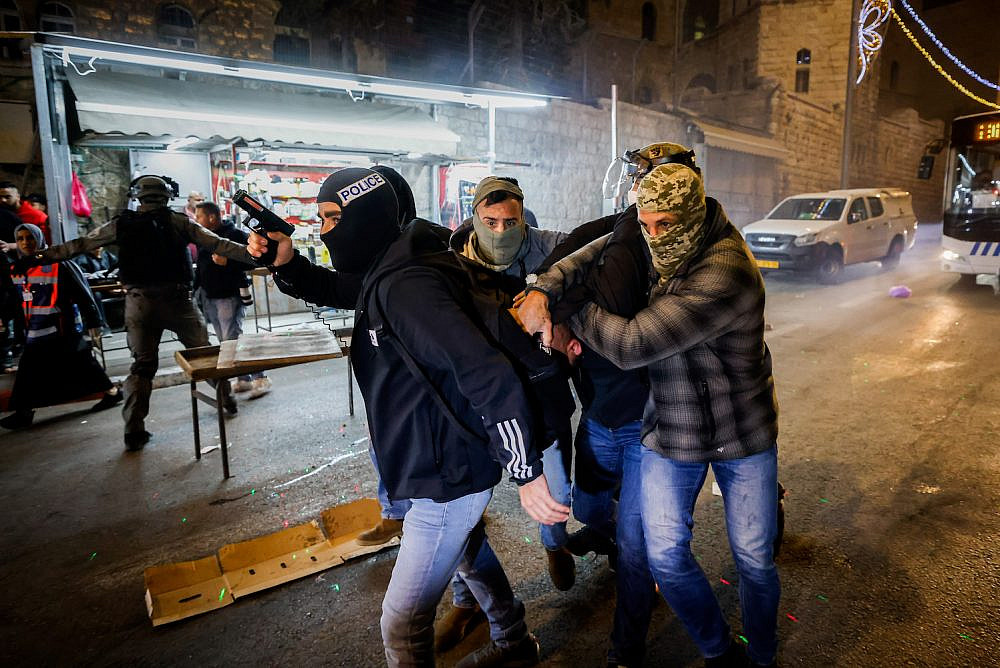 Israel’s response to a series of deadly attacks in Be’er Sheva, Hadera, and Bnei Brak over the past two weeks was as predictable as it was malicious. So far, the authorities seem to believe that the four Palestinian assailants — three citizens of Israel and one West Bank resident — acted of their own accord and without organizational backing, despite the first three identifying with the Islamic State. That didn’t stop the authorities from reacting in their usual habit.

Over the ensuing days, the police ramped up patrols of Arab towns in Israel; carried out stop-and-frisks of Palestinian citizens in Jewish neighborhoods and public spaces; and clamped down on Palestinians working in Israel without permits. Several municipalities ordered construction companies to freeze their employment of Palestinian laborers, while some Israeli schools told Arab maintenance staff to work only after students had gone home. Along with raids in the West Bank, soldiers blocked Palestinian workers from entering Israel through open parts of the separation barrier, which for years had been left unperturbed with the army’s quiet consent.

This proclivity for collective punishment forms a bedrock of Israeli policy toward Palestinians. Part of the disproportionate approach is performative — a bombastic way of showing Israelis that the authorities are taking some kind of action to restore security. Part of it is guided by a dubious theory of deterrence, believing it will dissuade assailants by threatening their entire families and communities.

But at its heart, collective punishment is an exercise in plain racism: in Israeli eyes, every Palestinian is a permanent suspect, a terrorist waiting to strike, a member of a society that teaches its children to hate Jews. It doesn’t matter if hundreds of thousands of people had nothing to do with the attacks: when one Palestinian crosses the line, every Palestinian must pay the price.

Punishment is not meted out by the state alone. Gangs of right-wing Jewish vigilantes have been seen scouting for Palestinian workers in Israeli towns to intimidate and force them back to the occupied territories. Activists in the West Bank are reporting an uptick of settler attacks on Palestinian villages and their agricultural land. Palestinian citizens of Israel are sharing stories of being profiled and turned away by cab drivers, store clerks, and other service providers, and some are scared to speak Arabic in public for fear of racist assault.

To make matters worse, the government has called on Israeli civilians to take part in its response by arming themselves. “What is expected of you, citizens of Israel?” asked Prime Minister Naftali Bennett in a video statement on Wednesday, “Alertness and responsibility. Open your eyes. Whoever has a license to carry a weapon, this is the time to carry it.” Applications for licensed guns have skyrocketed as permit regulations are expected to be loosened further, pouring more weapons into a public sphere already filled with armed soldiers and police.

This demonstration of power — the ability of the Israeli state and Jewish society to ensnare every Palestinian for the infractions of a few — is largely missing from the mainstream media’s understanding of what constitutes “violence” in these moments. If anything, Israel’s racist measures are viewed by many as logical and justified. It is telling that outlets have uncritically described the three deadly attacks in Israeli cities as a “wave” or “surge” of violence; such acts against Jewish-Israelis are seen as rare, shocking, abhorrent, yet such acts against Palestinians — gun crime in Arab localities in Israel, police brutality in Jerusalem, army and settler shootings in the West Bank, and air strikes in Gaza — are normal, expected, routine.

That gross asymmetry of whose lives warrant attention, and whose deaths deserve condemnation, is itself a form of cruel, constant violence. It is what pulls the world’s attention to the murderous attacks of a few while ignoring the brutal wrath incurred by the many. And it is what cements apartheid as both a physical reality on the ground and a normalized belief in the mind.