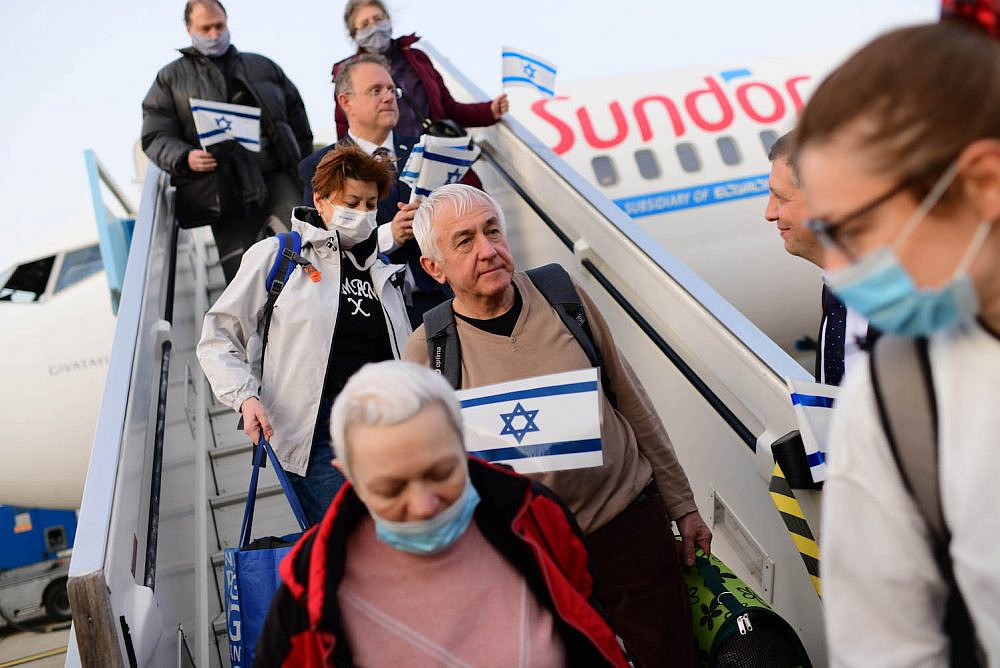 In Israel-Palestine, the Russian invasion of Ukraine and the exodus of over a million Ukrainian nationals has made one thing clear: the Israeli government does not have an adequate plan for dealing with refugees, particularly if they are not Jewish.

Following harsh criticism of Israel’s initial decision to shut its doors to refugees fleeing from Ukraine, including from the Ukrainian ambassador and consul in Israel, the government announced a new policy according to which Ukrainian refugees entering Israel after fleeing Russia’s invasion will be required to pay a deposit of NIS 10,000 each and commit to leaving the country within a month (which may soon be extended to a year), upon which they will receive their deposit back.

Much has already been said about Israel’s inhumane policies toward refugees in general, and in particular African asylum seekers who fled the horrors of war in their countries and have been subjected to years of endless humiliations. Following the outbreak of war in Ukraine, we have witnessed this inhumane treatment meted out against Ukrainian refugees as well.

The demand that Ukrainian refugees pay a large deposit to deter them from remaining long term indicates that, for Israel, the condition of being a refugee is supposed to end the moment the danger passes. At that point, the thinking goes, the refugees should return to their home country. This, of course, applies only to refugees for whose flight Israel itself is not responsible.

When it comes to Palestinian refugees, Israel will prevent their return at all costs, lock the gates in their faces, and forever determine the refugee status of their children and grandchildren. Israel believes refugees from anywhere else in the world should be able to and are even required to return to their homeland at the end of hostilities. Yet Palestinian refugees, who Israel itself created in 1948, are barred from returning to their homeland, even seven decades after the end of the war.

Not only has Israel never allowed the return of hundreds of thousands of Palestinian refugees who were displaced upon its establishment, as well as millions of their descendants living in refugee camps across the world, it has even passed a law banning Palestinian citizens — those who remained within the borders of what became Israel — from marking the expulsion of their people as a day of catastrophe, lest they be exposed to various state sanctions.

This is not the least bit surprising. It is yet another demonstration of the sweeping exemptions Israel has granted itself since its inception — not only from any commitment to international law, but also to the most basic tenets of morality.

For more than 70 years, Israel has treated itself as an exception to which international laws and norms do not apply. This is particularly ironic in light of the fact that one of the pretensions of Zionism was “to bring the Jews back into the circle of history,” that is, to some semblance of normalcy as part of the community of nations. But Israel does not actually want to be normal. It never wanted that.

In fact, Israel maintains its self-granted license for abnormality every time it opens fire on unarmed demonstrators in Gaza, whenever it invades a neighboring country’s airspace, in every apartheid law it passes, and with every assassination of an Iranian nuclear scientist. And after all of this, when human rights organizations dare to point out its racism, its repeated violations of international law, or its apartheid policies, Israel immediately exclaims in response: “But why are you treating us differently?”

On Sunday, Interior Minister Ayelet Shaked lamented that 90 percent of Ukrainians who have entered the country since the beginning of the war are not Jews, and urged the government “to do more to bring Jews and those eligible for the Law of Return” (the World Zionist Organization is planning on settling at least some Ukrainian Jewish refugees in the occupied territories). Shaked also reportedly told the cabinet last week that “the war… will make European countries understand that they need weapons, and a lot of them. They will want to increase their defense budgets.”

Rather than close its gates to non-Jewish refugees while exploiting Russia’s invasion of Ukraine to bolster Jewish demography and sell weapons that will fuel future wars, Israel must put forth an immigration policy that does not rest on the supremacy of Jews over others. It must also make the necessary reforms regarding asylum seekers and refugees already in its territory and, above all, allow Palestinian refugees the right to return to their homeland. Until then, no humanitarian gestures will be able to hide the cynicism of its policies.