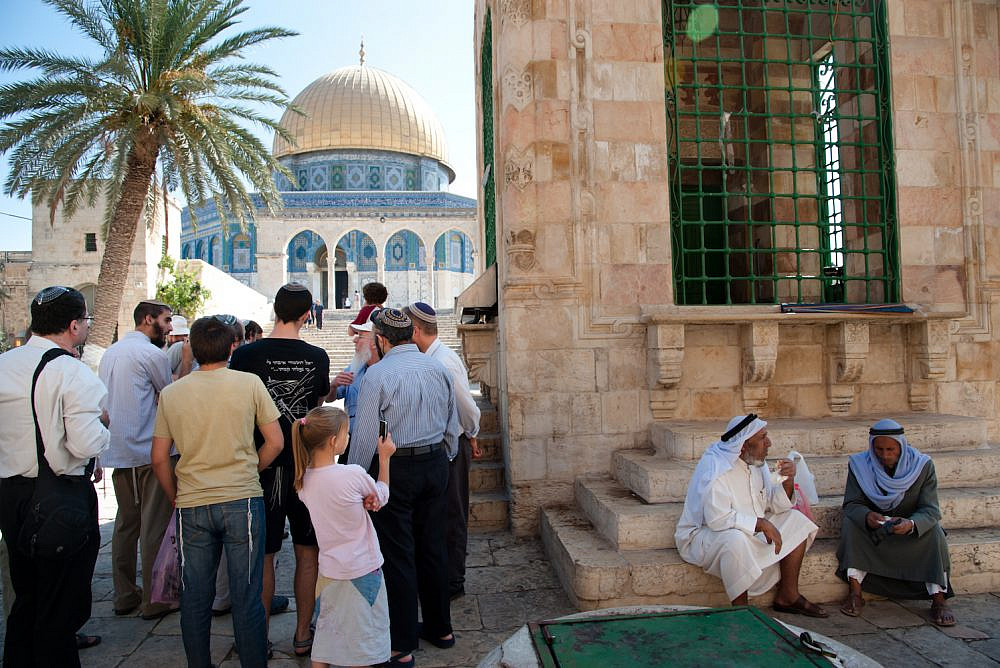 A few years ago, while conducting research on Jewish far-right movements, I toured the headquarters of the Temple Institute in the Jewish Quarter of Jerusalem’s Old City. Most of the site is taken up by a museum dedicated to the Temple, the holiest site in Judaism; on display to visitors are priestly garments, ancient dyes, silver trumpets, vessels, and other ritual objects to be used in the “renewed Temple service,” all meticulously adhering to biblical specifications.

Operated as it is by a messianic group dedicated to building the Third Temple on the Temple Mount/Haram al-Sharif — in place of the Dome of the Rock and Al-Aqsa Mosque — this museum is not an archive, but a blueprint. The institute is part of the Temple Mount Movement, which has poured decades of work into reconstituting the ritual objects and practices that were abandoned 2,000 years ago with the destruction of the Second Temple. This project has been lavishly supported by a procession of American-Jewish and, more recently, Christian-Zionist donors, along with Israeli government funding.

This past Sunday, Jerusalem Day, as the customary, government-sanctioned anti-Palestinian violence unfolded in the streets of the Old City and beyond, we witnessed the enactment of another aspect of this Temple project: the entrance of a record number of Jews — over 2,500 — to the Temple Mount, accompanied by the Kahanist MK Itamar Ben-Gvir. One viral photo showed a number of men lying prostrate on the ground, unencumbered by the police, performing a ritual action associated with Temple worship.

For anyone who was inclined to take the Israeli government at its word when, just a few days ago, it recommitted itself to the “status quo” on the Temple Mount/Haram al-Sharif — wherein the compound is overseen by the Islamic Waqf and Jews are permitted to visit so long as they do not engage in religious practices — the photos that emerged on Sunday may seem aberrant, the result of a security lapse, or even, to the particularly fanciful hasbarista, evidence of some kind of “restraint” by the Israeli security forces (who nonetheless arrested dozens of Palestinian worshippers in the compound).

The truth, however, is that Sunday’s events revealed just how little relation the “status quo” on the Temple Mount/Haram al-Sharif bears to the reality of how the Israeli state, and Jewish worshippers, conduct themselves in the compound. Israeli forces have staged numerous raids of Al-Aqsa Mosque over the past decade. Temple Mount activists of various stripes — whether formally affiliated with the Temple Mount Movement or not — have been praying on the compound for years, increasingly with police protection and coordination. Some of those prayer visits have included the prostration seen yesterday; in previous years, worshippers were arrested for lying on the ground during prayer, but more recently, that has not been a foregone conclusion.

Moreover, the numbers of Jews ascending to the Temple Mount/Haram al-Sharif have soared under Prime Minister Naftali Bennett’s government (albeit with an assist from the coalition of his predecessor, Benjamin Netanyahu), which advertised itself as a cordon sanitaire against the extreme right but which largely — with obvious exceptions — subscribes to many of its racist, expulsionist, and segregationist tendencies. Temple Mount activists are also riding a wave of increasing leniency from the security forces, religious authorities, and even the courts. In 2020, the UAE-Israel accord contained a finely-worded clause that effectively provided for Jewish worship on the Temple Mount/Haram al-Sharif, and a growing number of Israeli Jews support Jewish prayer in the compound, even if only to assert Israeli “sovereignty” over the site.

All of this makes it difficult to pin down the moment when the “status quo” ends, while underlining the need to accept that the actual status quo is one in which the Israeli religious right enjoys increasing latitude at the site, backed — in deed, if not in word — by the state.

And indeed, the “status quo” on the Temple Mount/Haram al-Sharif has not prevented it from being the site that triggered, among other conflagrations, the 1990 unrest in which Israeli security forces killed 17 Palestinians and wounded over 150 more, after the Temple Mount Faithful attempted to lay the foundation stone of the Temple; the Second Intifada, after then-Prime Minister Ariel Sharon visited along with several other Likud politicians, also in defiance of the so-called “status quo”; and horrendous escalations of violence in the 2010s in the wake of rising numbers of visits to the compound by religious Israelis.

To that end, what goes for the Temple Mount/Haram al-Sharif goes for the grotesquerie that erupted across occupied East Jerusalem and the West Bank on Jerusalem Day. The violence, the vandalism, the exuberant racism on the part of the tens of thousands of Flag March participants — whose stock chants of “Death to Arabs” and “May your villages burn” were supplemented, this year, by “Shireen [Abu Akleh] is dead” — were not deviations from the norm. They were, instead, elaborations of a status quo that is becoming ever more entrenched — one in which violent assertions of Jewish supremacism are presented as the exercise of Jewish civil and religious rights, and in which Palestinians’ desire for freedom from such lethal oppression is reimagined as a terrorist threat of existential dimensions.

The events of Jerusalem Day did, however, reaffirm two grim truths that we ignore at our peril. The first is that, as with every eruption of far-right violence in Israel-Palestine, by the time what we are told is a “norm” or a “status quo” in the country appears to suddenly collapse, the work of dismantling it has long been underway. The second is that those outbursts of violence and escalating brutality, for all the attention they draw in the moment, gradually anneal into a new normal. And so it was that a major Israeli news outlet felt moved to report, Sunday evening, on an “uneventful Jerusalem Day flag march.”