Could a dull event in Jerusalem, in front of just 1,000 people, spell the end of Glenn Beck?

It must have been pretty rough for Glenn Beck to see this: 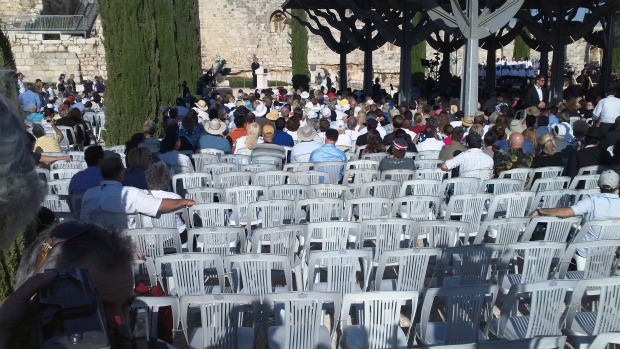 The empty seats during Glenn Beck's speech. Just over a thousand people (according to Beck) were in attendance (photo: Ami Kaufman)

After months of preparations, hours of television and radio talk all geared up for the big day, tons of merchandise manufactured, Glenn Beck could just about muster over a thousand people at his “Restoring Courage” last night in Jerusalem.

I can’t help but think that this flop might be a lethal blow for this guy. After getting kicked out of FOX and then his decision to veer even farther to the right by partnering up with the likes of Pastor John Hagee, Beck seems to have lost any chance whatsoever to get back into mainstream America like he was just months ago.

Even the event a few days earlier in Caesarea had more umph in it than this one. In fact, he barely even cried in this one. I think he might have been shedding the real tears back stage. But hey, Herman Cain showed up, right? 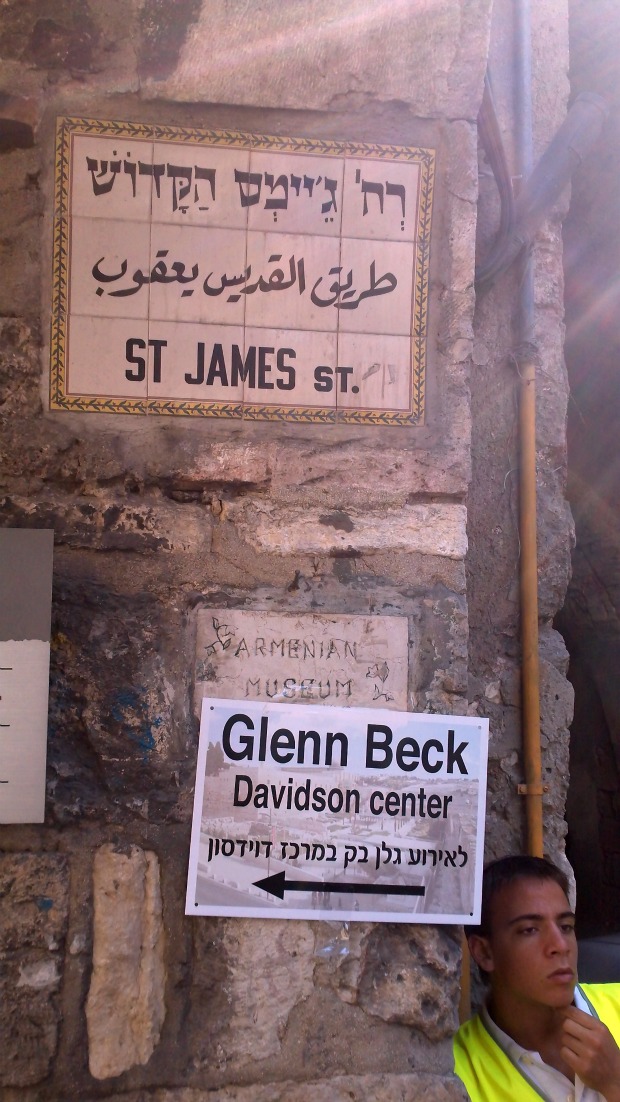 The walk through the Old City to get to the Beck rally (photo: Ami Kaufman)

We were holed up in the press kennel for over an hour before we could head down to the seats. Rumors were going around that the Beck people didn’t want reporters talking to any of the tourists. 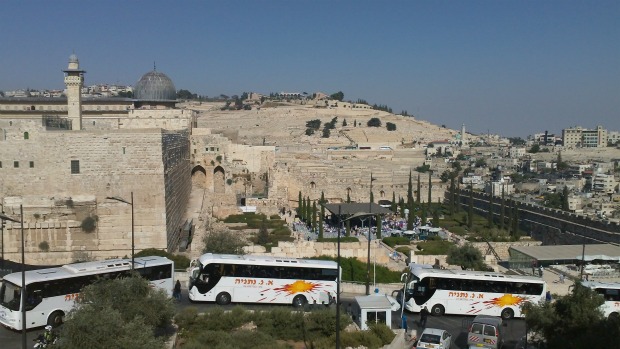 The "rally" was held below the Al Aqsa Mosque (upper left corner), near the Southern Wall. (Photo: Ami Kaufman)

But while we were waiting, MK Danny Danon – the one who invited Beck to speak at the Knesset not long ago – gave the foreign press some juicy sound bytes. You know, “We are standing here at the core of Judaism” and all that stuff.

First to head to the podium was Jerusalem Mayor Nir Barkat, who spoke about the recent archaeological finds in his city that prove it is Jewish. He even brought a small bell from one of the digs. It was so small no one could see it. “You see this bell? This bell, the Wall – all this proves Jerusalem is Jewish.” 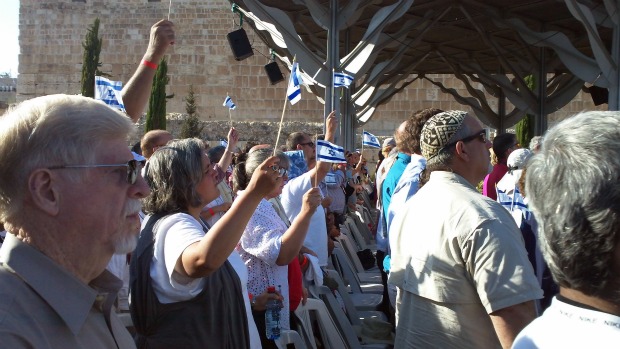 After a few more dull speeches, a medal ceremony began. Out of the three medals Beck gave out, I think it’s safe to say he struck out on two of them. One medal of courage was given to the Jewish and Arab owners of the Maxim restaurant in Haifa that was blown up by a suicide bomber during the Al Aqsa intifada. I’m OK with that – especially since I grew up in Haifa.

Another medal was given to the Fogel family of the settlement Itamar, who were murdered in their sleep a few months ago by Palestinians. Sorry, I just find that to be in particularly bad taste.

The third medal was given to Rami Levy, who owns a supermarket chain. Beck gave him the medal for catering to the needs of both Arabs and Jews in his supermarket way across the Green Line in Gush Etzion. This is the same Levy, who in that same branch, fired all his Arab workers one day because one of them was courting a Jewish cashier. (UPDATE: There have been complaints about this article, saying Levy never fired the workers. There have been conflicting reports: some say only one worker was fired, some say all the workers were put on temporary leave. This item, from channel 2, films supermarket workers saying the Arab packers were fired, only to come back the same day the film crew showed up:  http://www.mako.co.il/news-channel2/Friday-Newscast/Article-eb99578fef67131004.htm. Either way, there is now segregation between Jews and Arabs who work at the store.) 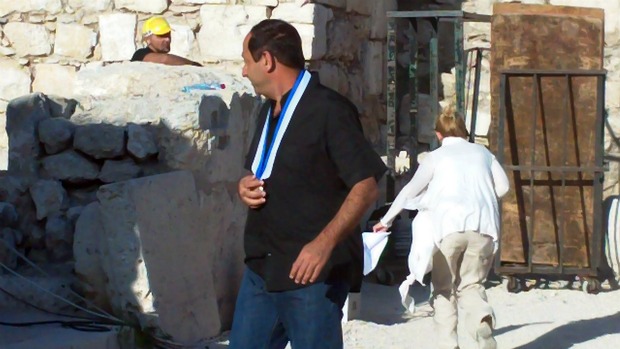 Rami Levy checking out his Courage medal. The courage to fire your Arab employees and get away with it (Photo: Ami Kaufman)

This also the Rami Levy who has gone to considerable efforts, together with Jerusalem Mayor, to block an attempt by a Palestinian businessman to buy land in Jabel Mukaber in East Jerusalem, just so it wouldn’t fall into Arab hands. 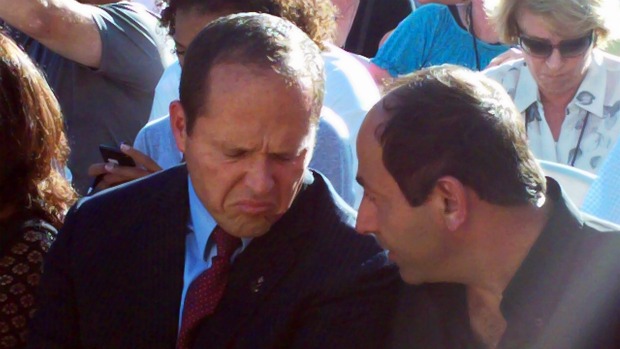 And finally, it’s back to Glenn Beck who gives a 50 minute speech about courage. Nothing we haven’t heard before from him, no new pearls of wisdom. I knew he was going to say something in Hebrew, but I didn’t know exactly what. This time it was from psalms, “Lo ira!” – “I shall not be afraid!” 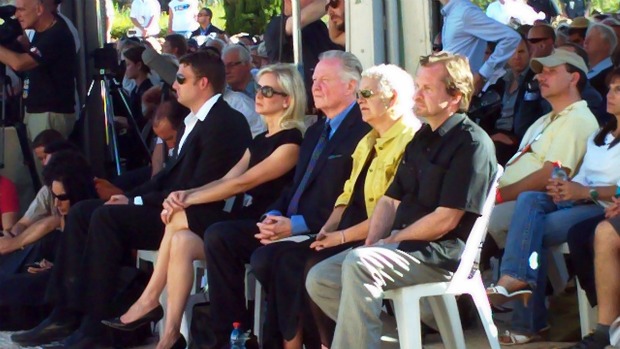 Even after 50 minutes of explanations it’s hard to know what Beck might be afraid of or not, and if he indeed has the courage to overcome it. If I were him, I wouldn’t compare this fiasco to the  Restoring Honor rally last year, which was sooo much more impressive.

In fact, now that Beck has found his Honor and his Courage, I’m hoping he’ll follow the yellow brick road out of Israel and try to find some Brains elsewhere.

I’ve had enough of people coming from thousands of miles away to meddle in my own affairs.