An inside look at the financial and psychological costs of the recent unrest in one of the country’s most segregated cities.

As the rocket alert sirens rang out in Jerusalem Tuesday night, a group of friends passed around a pungent hashish cigarette on Yohanan Horkanus Street, an alleyway nestled between the commercial center of Jaffa Street and the Haredi neighborhood of Mea She’arim.

“Jews and Arabs needn’t be enemies!” joked Uri, repeating one of the Hebrew slogans a group of graying left-wing Israelis chanted last week in a tame, feel-good march against racism in the city center.  “All of us, together, without hatred or fear!” responded Noor in kind. (Both slogans rhyme in Hebrew.) After a shared laugh, the group returned to their hash and to discuss their plans for the night: where they would watch the World Cup, how late one of them would be working at a nearby bar.

No one ran for cover.  No one was afraid. Life went on. “Welcome to the Middle East,” Muhammad told me. 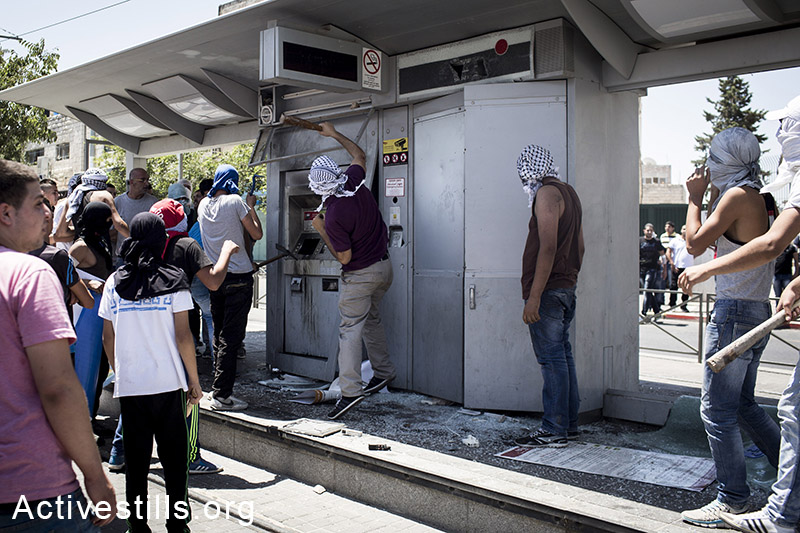 Palestinian youths brake the light-train station of Beit Hanina, during clashes that broke out in East Jerusalem following the suspected kidnapping and murder of a Palestinian teenager, East Jerusalem, July 2, 2014. Total of four journalists and a dozen protesters injured in the clashes. (Oren Ziv/Activestills.org)

During periods of calm and unrest alike, some journalists appear keen to portray Israelis as steadfast consumers of the good life. Doing their part to enjoy themselves — la’asot chayyim — as others, typically out of sight, bear the brunt of rocket attacks, Molotov cocktails, rubber bullets, or stone throwing. Just ask these Tel Avivim.

Indeed, Uri and Noor’s cynicism is a luxury of Jerusalem being on the safe side of this exchange of rockets, which, according to UN reports, has claimed over 114 civilians in Gaza, 77% of whom are children. What differentiates their attitudes from those in Tel Aviv is that contentious politics in Jerusalem is du jour. The occupation is in full view here in the form of separate bus systems for Israelis and Palestinians, an Israeli transportation system that reflects the official view of this city’s united nature, and, of course, the separation wall. Urban hipsters such as Uri and Noor thumbing their noses at both the leaders espousing and escalating violence, as well as the graying peaceniks seeking to bring an end to it is just one part of this city’s political economy, where workers and consumers, both Israeli and Palestinian, navigate a conflict that is tangible in everyday ways.

Yaron Tuvian runs a shoe store with some family members next to the Jaffa Street light rail stop. Sitting outside his shop, he elaborated on the financial and psychological costs of the recent unrest.

“In a normal day, I’ll take in 3,000 shekels. These days I’m only making 1,000,” Tuvian, a resident of Pisgat Ze’ev, told me, stroking his bleach-streaked dark brown hair while blowing cigarette smoke from his nose. “I can’t take the light rail to work anymore because of the damage done to it in Shu’afat, and I’m afraid when I come home at night.”

Tuvian’s fear is well placed. Israeli buses traversing East Jerusalem to settlements such as Pisgat Ze’ev have been targeted by Palestinians throwing stones. In addition, Tuvian claims that other attempted kidnappings have taken place along Israeli roads in the West Bank.

Jaffa Street, however, is a safe space for Tuvian. For Palestinians working in West Jerusalem, on the other hand, coming to work runs them the risk of being attacked by Jewish extremists, as occurred last week on the night after the funeral of Gil-Ad Shaer, Eyal Yifrah, and Naftali Fraenkel.

There has been a noticeable increase in the presence of uniformed Israeli police in the western part of the city in the past week. Moreover, Haaretz reported that plainclothes police have also been deployed, in an effort to protect Palestinian workers from Jewish rioters.

“Another Palestinian here hasn’t come to work at all since this started,” Fuad, a 21-year-old resident of the Shu’afat refugee camp told me outside of Coffiz on Ben Yehuda Street, a café where he is one of four Palestinian employees out of a staff of nine. Fuad takes the No. 7 Palestinian bus to work, which brings him to the East Jerusalem Bus Station outside of the Damascus Gate. He then takes the light rail two stops from Damascus Gate to Jaffa Road – a short walk to Ben Yehuda Street.

“My coworker is afraid, his family is afraid.” The manager, an Israeli Jew, has given this coworker days off, which allows Fuad to pick up more shifts, something he says is more important to him than the political turmoil.

“I don’t read the news, other than what is happening in the [World Cup],” he told me, lifting his head back to soak in some sun on a break as a bearded man with a yarmulke and tzit-tzit looked on and listened. “I’m not afraid of what’s happening, though – why should I be?” 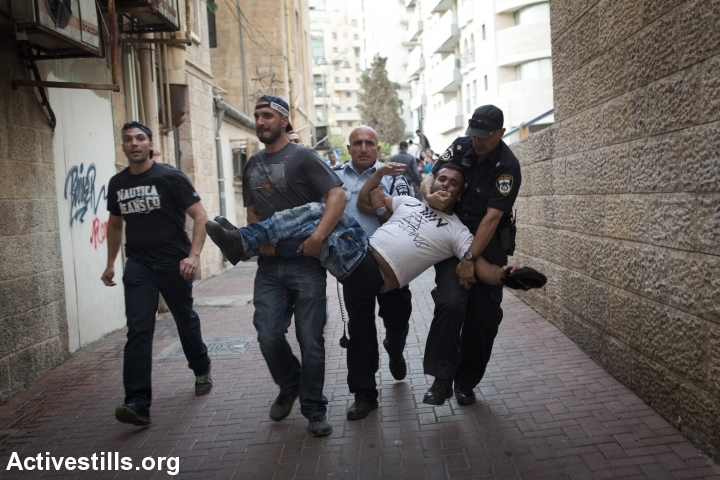 Neither are his customers. “We were packed on Tuesday night,” the night Jerusalem was targeted by rockets. “They were all Americans, though. They don’t know what’s going on. Some of them talk about ‘death to Arabs’ but its stupidity.”

For other businesses, like Alma, a restaurant adjacent to Hatulot Square – the scene of the riots linked above – the unrest here has caused a significant drop in customers. While he wouldn’t tell me the exact figure, Lavi, the manager of Alma said his business is down 50 percent in the past week. Such a drop in income this time of year, Lavi explained, can disrupt the longer-term health of businesses in the area.

“June, July — these are the big months for us here,” Lavi, told me on Thursday. Restaurants near Hatulot Square rely on the steady flow of tourists during the summer months to sustain the slower months in the fall when tourism drop off and Israeli Jews are celebrating holidays at home with their families. “Our customers are split 50/50 between tourists and Israelis. Even with the World Cup, it has been slow.”

A cheerful man with sandy hair and light-blue eyes in his 30s, Lavi told me that those who come into Alma want to talk about what is going on. Many of the tourists who have come in recently are predisposed to seeing Israel as an aggressor—something he tries to combat.  “Some Jordanians came in the other day,” he gushed, his restaurant empty, “obviously they have their views about Israel – they are closer to the Palestinians — but at the end of it we both understood the other’s view.”

Lavi’s cheerful disposition and desire to bridge gaps is touching, both in the face of continued conflict and economic woes. Others struggling at this time, however, fall back on discourses that present the conflict in a monolith.

Asher, a cab driver from the Jerusalem neighborhood of Kiryat Yovel said his business has dropped off 40 percent. “People are afraid to go out to the city,” he told me Monday afternoon. For customers taking cabs to or from East Jerusalem or settlements farther east, he is faced with a dilemma: to make these longer trips, which can run upwards of NIS 100, he runs the risk of being attacked.

“In general I’ll go to Beit Hanina and Shu’afat,” he told me as we drove around the city center, “not now though. They’re throwing stones — it’s a mess. They’re stopping drivers to see if they’re Arabs or Jews.” He stopped the car at the top of Ben Yehuda Street and asked if I mind keeping the meter on while we talk. “The Palestinians don’t want quiet, you know? We need complete separation. We can’t have some areas open and some areas closed. That’s how these kidnappings take place. Hebron is closed, Bethlehem is open. With some people being able to move around and others not able to, that’s what will happen. 100 percent separation, not 90 percent, 100 percent.”

Twenty minutes after the sirens rang on Tuesday night, Evyatar, a bartender at Radio Free Jerusalem with a Hapoal Katamon logo (a local, left-wing affiliated soccer team) tattooed to his right calf, muted the news and turned on music. His first choice was the Rolling Stone’s “Gimme Shelter,” followed by Edwin Starr’s “War.” I struck up a conversation with Nevo, a student at the Sam Spiegel Film School in Jerusalem. “The problems in this city,” he explained, “are not from its residents — like those kids chanting death to Arabs. This isn’t the most important city in the world the way those idiots think so.”

Related:
Not just escalation: A new, frightening era of Jewish-Arab relations in Israel
A premier failure: Where is Israel’s leadership?
Checkpoints and blood drives: East Jerusalem hospitals cope with clashes