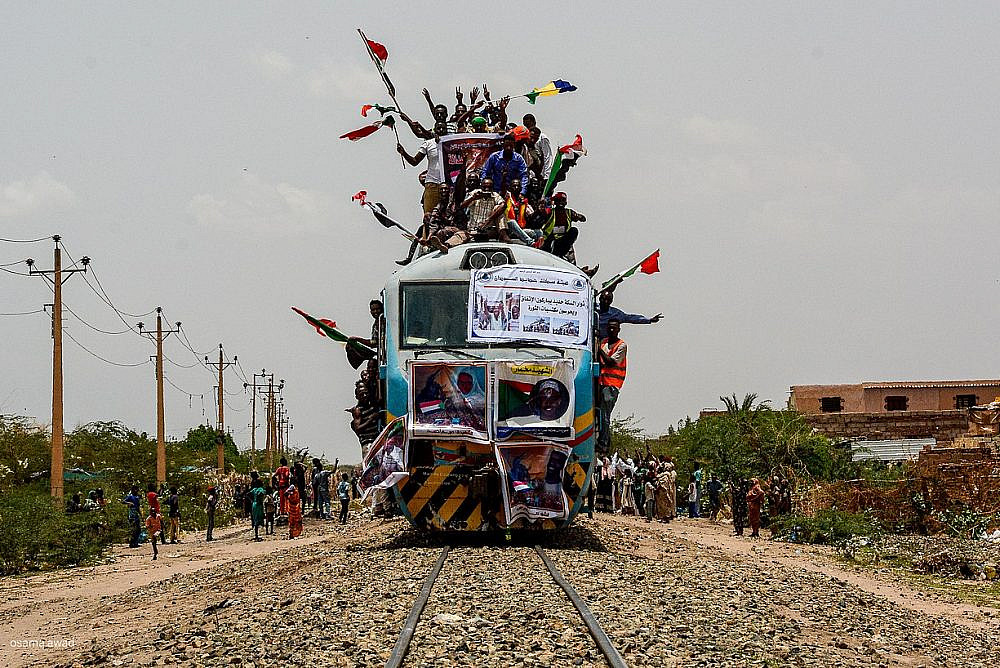 Protesters on a train coming from Atbra city about 300 km from Khartoum, during the Sudanese revolution, 17 August 2019. (Osama Elfaki/Wikimedia)

A meeting last month between Israeli Prime Minister Benjamin Netanyahu and the interim leader of Sudan, General Abdel Fattah al-Burhan, caused widespread uproar over the perceived normalization of ties between the two countries.

Both men are in a complicated position: Netanyahu is entangled in legal affairs and leading a third election campaign this year, while al-Burhan — a military ruler and head of Sudan’s sovereign council — is struggling to distance himself from the regime of Omar al-Bashir, whose 30-year tyrannical reign came to an end last April. Al-Burhan and some of his peers in the transitional institutions were key figures under al-Bashir’s rule who participated in his violent oppression of Sudan’s marginalized groups, and of political dissidents across the country.

Netanyahu and al-Burhan were representing two countries whose historical relations are fraught with tension and hostility, as well as secret collaborations and rapprochement efforts.

Israel has for decades considered Sudan an “enemy state,” while at the same time seeing it as a potential target in the “alliance of the periphery” — a policy by which Israel strove in its early decades to find partners among Middle Eastern and African countries, mainly out of narrow political and security-led interests. In the 1950s, on the eve of Sudan’s independence, Israel and the Sudanese Umma party made mutual attempts to create an alliance in order to curb Egypt’s influence in Sudan and the Middle East.

From the mid-1960s, the Israeli government closed off the route to Khartoum amid Sudan’s shaky political situation, while simultaneously supporting South Sudanese liberation movements. These groups were rebelling against their political exclusion and the Sudanese government’s violent control over the south of the country; in time, their ongoing struggle devolved into civil war. 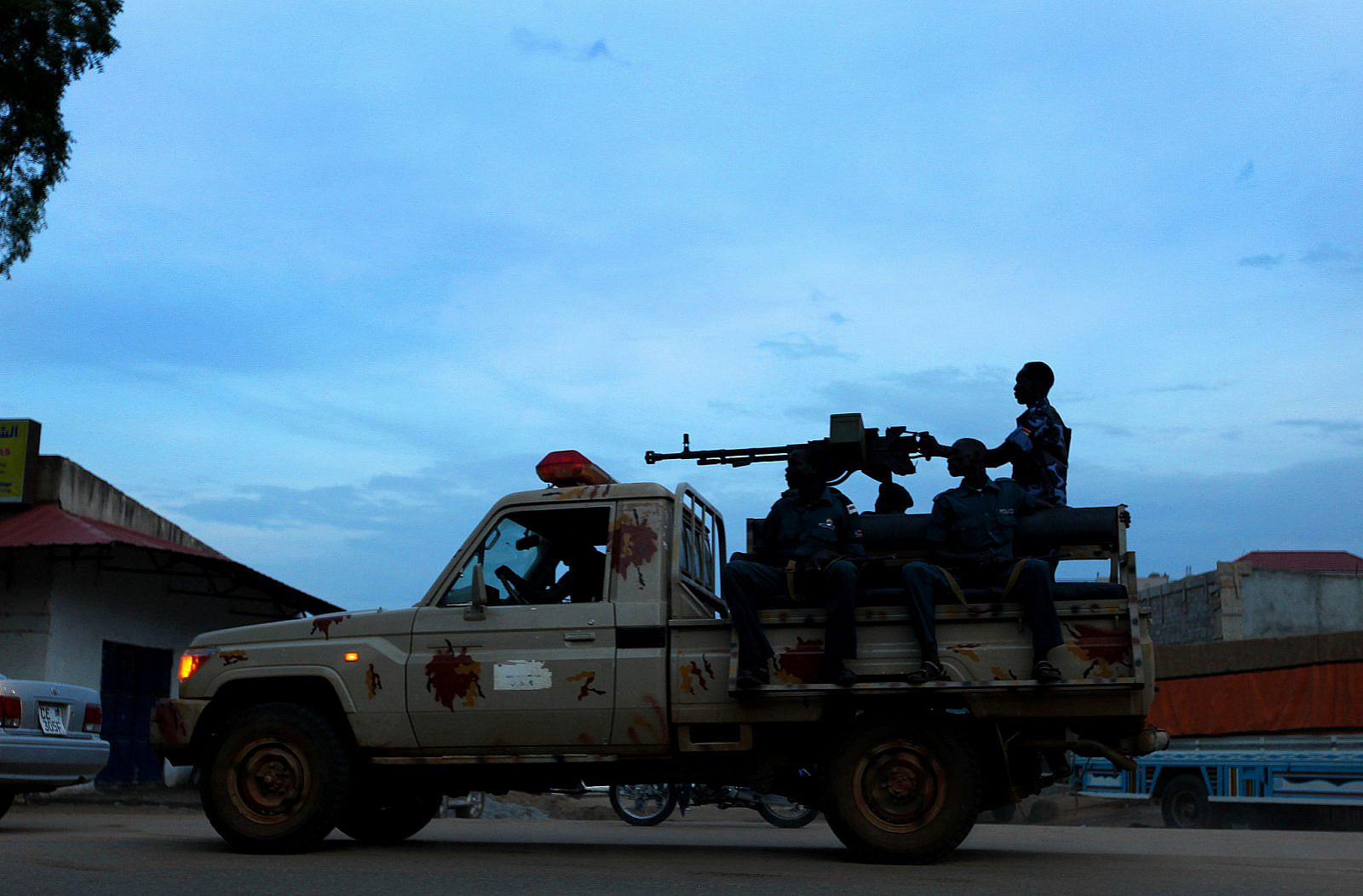 During the same period, the regime in Khartoum increasingly identified itself with political Islam, developing warm ties with Iran after the 1979 revolution and with movements such as Hamas and Hezbollah. Against this backdrop, Israel has led several air strikes in Sudan in recent years, aimed at thwarting ammunition production and shipments to the Gaza Strip.

Over the past decade, Sudan has been viewed in Israel as the origin country of thousands of asylum seekers, most of whom are from the marginalized groups and regions in conflict with the Khartoum regime. These people, alongside other African refugee groups, have become a political tool and a burning issue among the Israeli public.

Common xenophobic arguments about jobs, crimes, and the so-called “globalist left” are used in conjunction with a uniquely Israeli anti-immigrant argument: that being non-Jewish, these immigrants are a “risk” to the Jewish demographic majority. And although Sudan’s image as a violent dictatorship was reinforced among Israelis, it did not always translate into greater tolerance of Sudanese asylum seekers.

Meanwhile, Israel has gained a significant place in the Sudanese mindset. In 1948, 1967, and 1973, Sudanese soldiers were sent to assist the Egyptian army in its wars against Israel. Following the 1967 Six-Day War, Khartoum hosted a conference of Arab states that ruled against peace with Israel, against recognizing the country, and against negotiations. This agenda aligned with that of General Jaafar al-Nimeiri, who came to power in a military coup about two years later and who increasingly reinforced Sudan’s Arab identity and, eventually, its Muslim identity as well.

Nonetheless, al-Nimeiri collaborated with Israeli officials in the 1980s and allowed Ethiopian Jews to immigrate through Sudan under Operation Moses in late 1984, as part of his efforts to strengthen Sudan’s ties with the United States. This gesture was actually an attempt by al-Nimeiri to ensure his political survival; but while it brought him some financial benefits, it eventually contributed to the downfall of his regime. 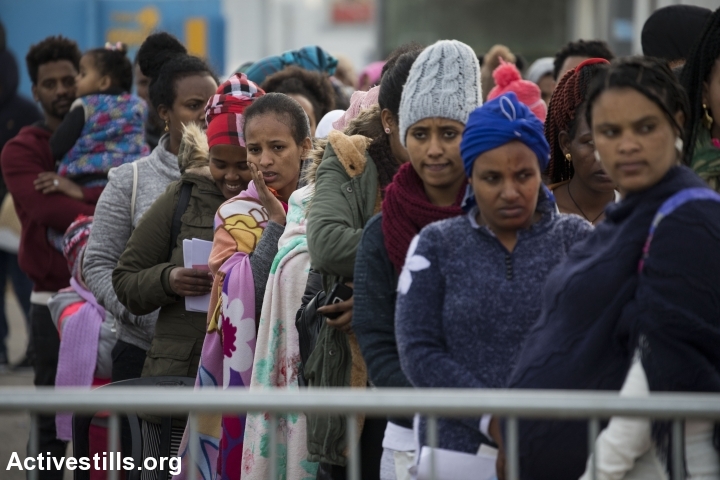 Asylum seekers from Sudan and Eritrea wait in line to enter the Ministry of Interior in the city of Bnei Brak, in order to renew their temporary visas or submit their asylum requests, in the early morning hours of February 4, 2018. (Oren Ziv/Activestills.org)

The legacy of colonial rule in Sudan, and its conditions at independence — a vast, ethnically- and culturally-diverse territory — sparked a “war of visions” over whether the country would be “Arab” or “African,” Muslim or multi-religious and multicultural. As this contest deteriorated into civil war, the southern independence cause relied primarily on regional and global Christian support, as well as on Israeli backing.

Successive Sudanese governments, meanwhile, have embraced a strong Arab-Muslim identity, gaining legitimacy as Africans in the Arab world through, among other things, propaganda against Israel regarding its oppression of Palestinians. This propaganda, especially during the al-Bashir era, was supplemented and reinforced by the influence of Arab media outside the country, and helped implant Israel into the Sudanese public consciousness.

Accordingly, for certain groups of dissident Sudanese, a change in hostile attitudes toward Israel and Jews went hand-in-hand with expressing general opposition to the regime. Urban liberals, supporters of secularism or reformist Islam, activists from the peripheries at odds with the regime, and immigrants and refugees abroad, among others, began to take an interest in Israel as a complex, multi-narrative country, beyond a singular “Zionist entity.” For some, this was manifested by making contact with Israelis to learn various narratives about the state and its inhabitants, and even to learn Hebrew.

At the same time, a sense of nostalgia emerged for Sudan’s former small Jewish community, which gradually left the country following independence. Today, a spectrum of attitudes toward cooperation with Israel can be found among Sudanese liberals in the country and in the diaspora. These include groups heavily influenced by growing pro-Israeli propaganda efforts (including in Arabic), to staunch opponents who condemn Israel for systematically violating the human rights of Palestinians.

Sudan is currently facing a challenging transitional period. The people who took to the streets en masse to overthrow the al-Bashir regime, and those who supported the revolution from the diaspora, are filled with hope and anxiety over the transitional institutions’ prospects of bringing political, security, and economic stability, and even democratic rule, to Sudan. 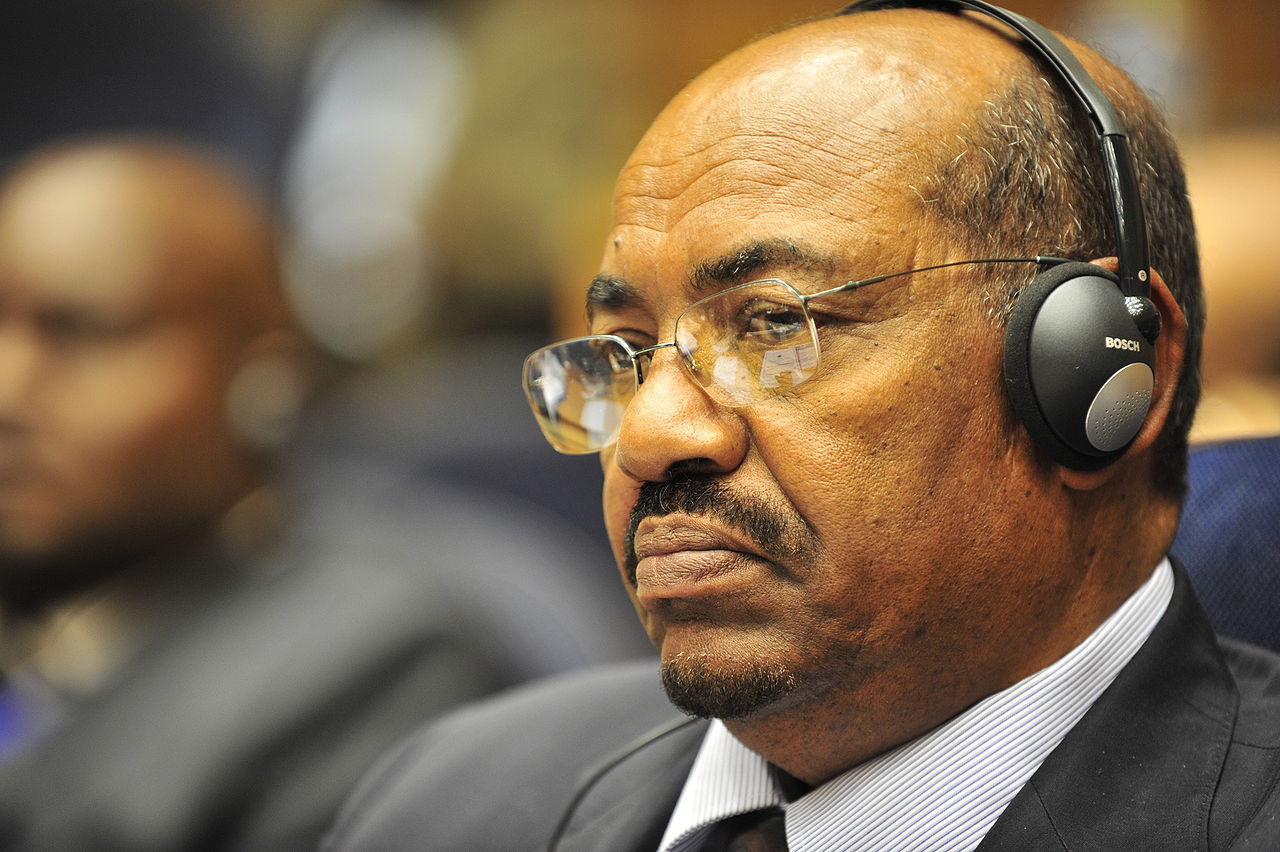 Omar al-Bashir, former president of Sudan, listens to a speech during the opening of the 20th session of The New Partnership for Africa’s Development in Addis Ababa, Ethiopia, Jan. 31, 2009. (US Navy photo by Jesse B. Awalt)

In these conditions, Israel is offering Sudan a possible lifeline from a much-feared economic disaster. The meeting between Netanyahu and al-Burhan was the most publicized move to date between the two countries’ leaders, due to its suggestion of a rapprochement.

However, it is worth noting that during the final years of his rule, and like al-Nimeiri before him, al-Bashir had similarly viewed engagement with Israel as a channel for warming up ties with the U.S., even as his anti-normalization rhetoric continued.

This has to do with Sudan’s entanglement in the coalition of Arab Gulf countries and Egypt vis-à-vis countries like Iran and Qatar. This is expressed in part by Sudan’s dispatching of tens of thousands of soldiers — including children — to Yemen in recent years to fight against Iran in a coalitional proxy war between the Islamic Republic and Saudi Arabia.

Israel shares the latter’s anti-Iran stance, and has therefore provided Sudan with some lobby support in Washington, resulting in the U.S. lifting most of its economic and trade sanctions on Sudan in October 2017. Yet Sudan remains on the United States’ list of State Sponsors of Terrorism. Among other sanctions, this makes it difficult for Sudan to obtain aid budgets, which are considered essential by the authorities for the success of the transitional period.

While many Sudanese see the warming of relations with Israel as an opportunity for economic survival, others highlight the problem of the country succumbing to the economic and political interests of influential Arab neighbors, Israel, and the U.S., especially while it is stuck in financial distress and at a diplomatic disadvantage.

Given the sensitive regional situation stirred by Donald Trump’s so-called “Deal of the Century,” as well as Sudan’s intricate domestic dynamics, resistance to normalization is based not merely on religious sentiments or a sense of Arab nationalism, but also on pragmatic considerations. 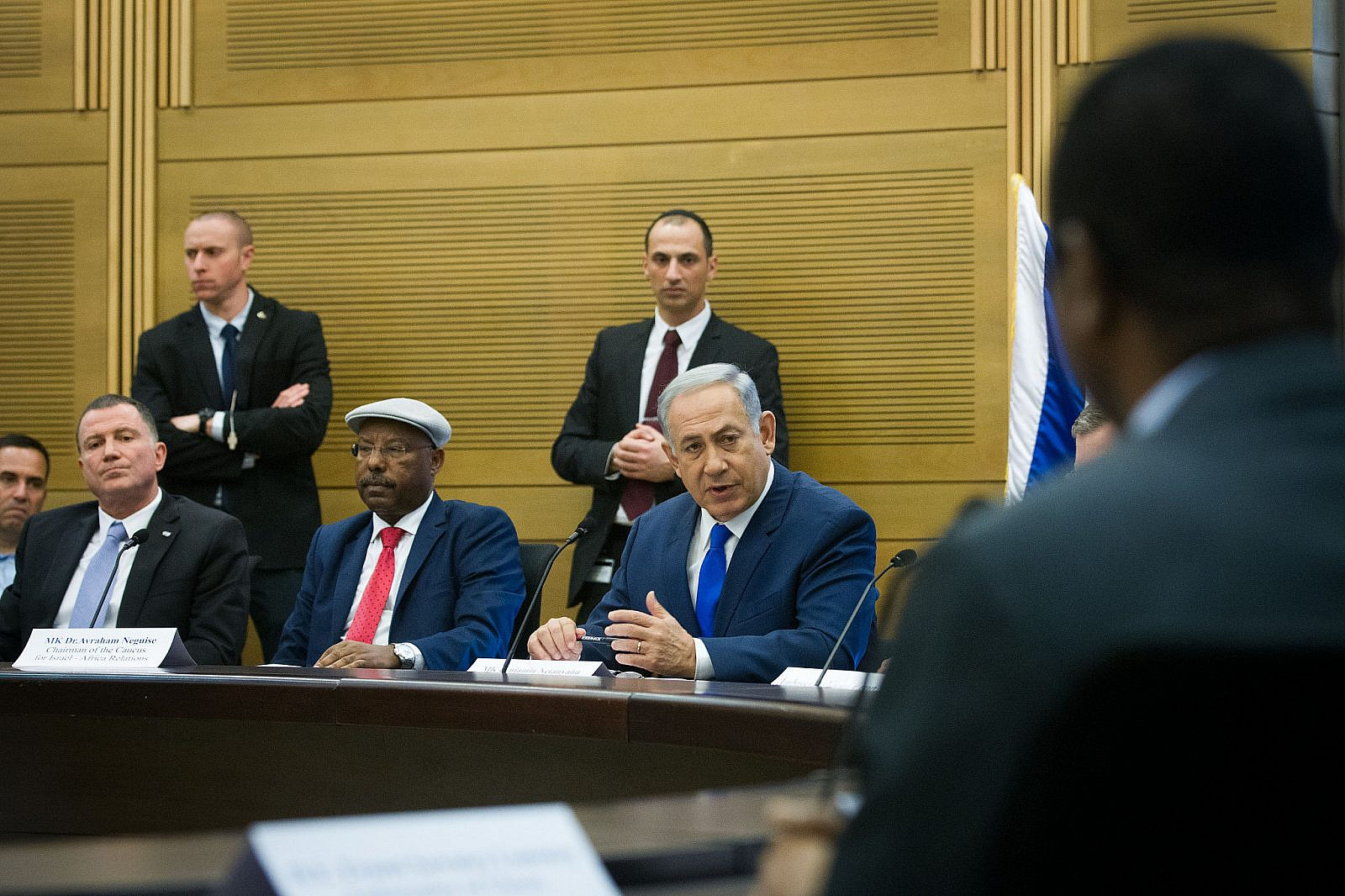 For one, Netanyahu met with Sudan’s military ruler but not with the head of the civil cabinet, Dr. Abdalla Hamdok, an apparent exclusion that has caused a great stir. The meeting thus illuminated the numerous difficulties in post-Bashir Sudan, including uncertainty over who is in charge — the military or civilians — and where Sudan’s interim leaders are taking the country at such a fragile moment.

Despite the clear opposition in some circles to normalization with Israel, foreign powers’ interests may yet compel Sudan to continue down this road. In the process, however, Sudanese asylum seekers in Israel could become a human, cultural, and social bridge, which also has business and economic potential. This group has both the knowledge and the skills to disperse preconceptions about Sudan, and to provide a more informed context to the discourse on normalization.

Still, despite a degree of integration and coexistence, the fact remains that the reality of life for asylum seekers in Israel has been defined by the country’s racism toward non-Jews in general, and African communities in particular. Unsurprisingly, there has been speculation regarding the potential deportation of Sudanese asylum seekers in Israel back to Sudan under the auspices of “normalization” between the two countries.

This issue serves as a reminder for the Israeli government that Sudan’s rulers do not represent the whole country, and that it is more than just a strategic asset. It remains to be seen how Israel will treat the citizens of the country it wishes to partner with, when those citizens are within its own borders.

A version of this article was first published in the Forum for Regional Thinking (in Hebrew). Read it here.

Inbal Ben Yehuda is a blogger at Local Call and a research associate at the Forum for Regional Thinking.

Before you go…
A lot of work goes into creating articles like the one you just read. +972 Magazine is nonprofit journalism, owned by many of our writers, editors, and journalists. In order to safeguard that independent voice, we are proud to count you, our readers, as our most important supporters. With your support, we can keep +972 Magazine a strong, independent, and sustainable force helping push the global discourse on Israel/Palestine.
DONATE
More About Sudan 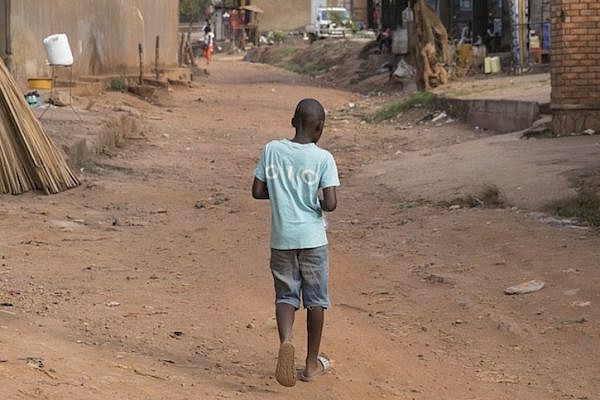