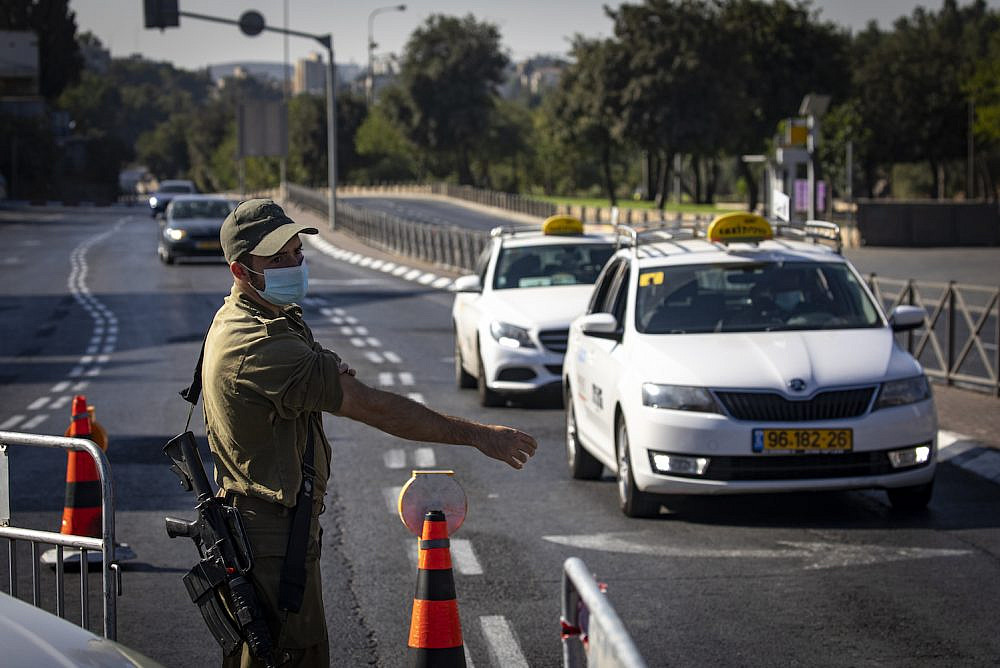 Israeli Police and soldiers seen at a temporary checkpoint in Jerusalem, September 27, 2020, during the nationwide lockdown to prevent the spread of COVID-19. (Olivier Fitoussi/Flash90)

Tuesday saw a sight unimaginable for many Jewish Israelis: armed soldiers were stationed at checkpoints to assist the police in enforcing coronavirus regulations at an anti-government protest outside the Knesset. The demonstration took place less than a week into Israel’s total lockdown, as the Knesset’s Constitution, Law, and Justice Committee approved a new law that would severely curtail protests.

The presence of on-duty soldiers outside the Israeli parliament caused such public uproar that they were almost immediately removed from the scene, with Defense Minister Benny Gantz apologizing for stationing them there in the first place.

It wasn’t long before videos surfaced of protesters yelling at a soldier. In one of the videos, a woman is seen shouting, “Shame! I will shame you! You are an IDF soldier! You are carrying out a military coup, you should be ashamed of yourselves!”

There is no doubt that using soldiers for policing, particularly for the purpose of restricting one of the most basic democratic rights, rightfully enrages many Israeli citizens; the intrusion of the military into the civil sphere is a dangerous sign that goes against the very nature of democracy. But it is hard not to be taken aback by this rage, especially in a country in which the army is already so deeply ingrained into the civil sphere that it is difficult to tell the two apart.

We are talking about a country where citizens learn to worship the army from day one. A country where preschool children prepare care packages for soldiers, and where schools effectively serve as an arm of the military. A country where ensuring students have a “meaningful army service” is one of the top priorities of the education system. Where Education Minister Yoav Galant is an IDF general who served most of his adult life in the army, and whose predecessor once came up with a nauseating plan for schoolchildren to adopt a grave of dead IDF soldiers.

This is a country whose most decorated yearly event used to be a mass donation drive for the army. A country with the second worst child poverty rate in the OECD. Where year after year, Israeli citizens were asked to reach deep into their pockets and donate to the richest public body in the country, whose budget lacks all transparency. A country where every soldier is considered “our collective child,” even if he or she has committed the most criminal of acts, and where an organization that seeks to expose these crimes is denounced as a group of traitors.

This is a country where Yair Golan, a Knesset member from the “progressive” Meretz party, begins all his media announcements by listing his IDF rank, while at the same time demanding the removal of soldiers outside the Knesset by claiming that “placing IDF soldiers in or near political events or is a serious mistake and a blow to democracy.” 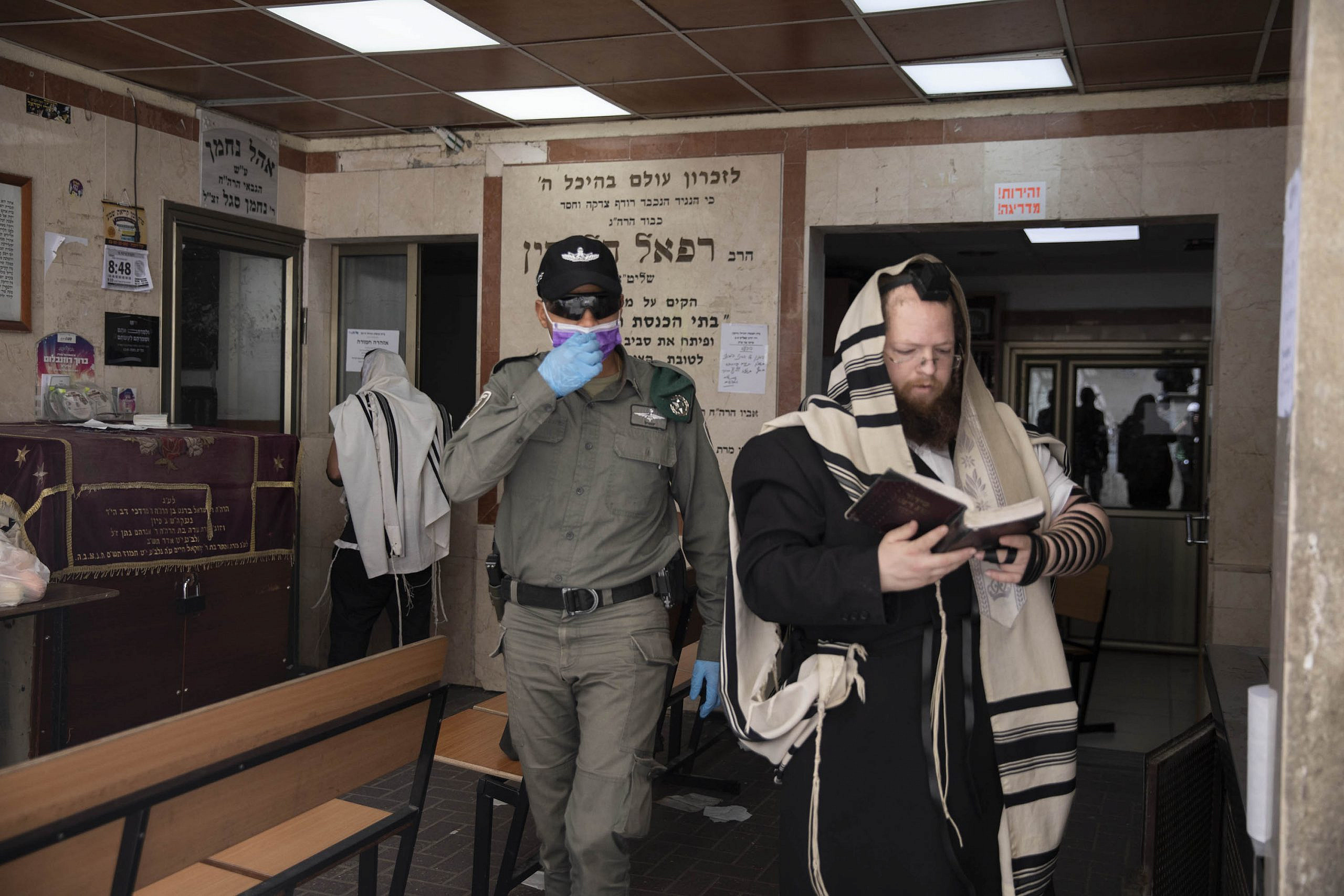 Israeli police patrol in the ultra-orthodox city of Bnei Brak, March 30, 2020. The government ordered a partial lockdown of the city in order to prevent the spread of the Coronavirus. (Oren Ziv)

No one found it strange when military jeeps roamed the streets of Israel and soldiers helped police enforce the coronavirus directives in March. When soldiers entered the ultra-Orthodox city of Bnei Brak to distribute food parcels to the residents, the Israeli public was moved by the photos. In general, the Jewish Israeli public loves soldiers: from the falafel vendor who offers a free dish to men in uniform, to the women who run the Association for the Wellbeing of Israel’s Soldiers, Israelis do not view the army as an unfortunate necessity. On the contrary, they are welcome in our public space.

The Jewish citizen in Israel learns from a young age that the army is an integral part of the civil fabric, a body designed to serve us and our needs. Therefore, the Israeli public has no problem closing its eyes to (if not happily encouraging) all kinds of military abuse of Palestinians in the occupied territories, from violent and arbitrary arrests to indiscriminate killings to violent repression of demonstrations — yet is shocked to see this face so close to home. After all, what Israelis are witnessing now has been the everyday reality for Palestinians.

In such a militaristic society, it is almost surprising that Israelis understand that there is something deeply flawed in deploying the military to police demonstrations. But as long as this sentiment is not translated into the eradication of militarism and of the blind worship of the army, its contribution to our imagined democracy will be very marginal, if at all.