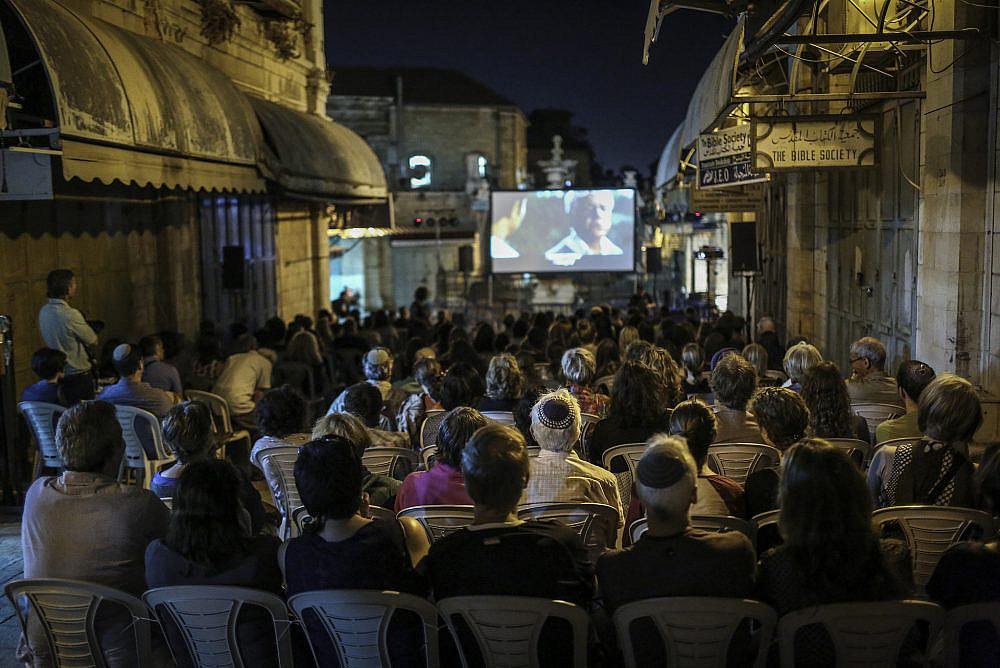 A film is screened at Muristan Square in Jerusalem's Old City as part of the Jerusalem Film Festival, July 14, 2015. (Hadas Parush/Flash90)

Every year, the Israeli army arrests some 700 Palestinian children, usually for stone throwing — an average of two minors a day. Most of these arrests take place in the children’s homes, often during night raids following incrimination by other children during hours-long interrogations carried out without the presence of an attorney or a child welfare officer. The typical sentence is months of imprisonment, usually served in Ofer Military Prison.

The arrest of Palestinian children is what lies at the heart of “Two Kids a Day,” a new Israeli documentary film by director David Wachsmann that premiered at the Jerusalem Film Festival last year, where it also won the prize for Best Documentary Research. The film features the stories of four minors from a refugee camp near Bethlehem, and includes interviews with the children and Israeli officials who justify their arrests and prosecutions, along with footage from their interrogations. The film portrays this treatment of children as an inherent part of the occupation and Israel’s system of control over the Palestinian civilian population in the West Bank.

In recent weeks, “Two Kids a Day” has been under attack from the Israeli right. This is not unusual: critical journalism or documentary work often meets pushback in a political environment that seeks to stifle any mention of the occupation. Under the new government, however, these calls for suppression are fast being transformed into policy, designed to delegitimize and even criminalize these kinds of films.

Culture Minister Miki Zohar — who promised upon entering office recently that he would “deny funding to those who promote our enemy’s narrative and harm Israel’s good name” — is trying to force the film’s producers to return the grants they received from state-run funds, after the small right-wing organization Btsalmo started a campaign to try to cancel a screening of the film at the Cinematheque in Herzliya last week. Zohar turned to Finance Minister Betzalel Smotrich and asked him to use his authority to retroactively deny the film funding; since this money was already spent on production, the step will likely lead to a major fine targeting the film’s producers. 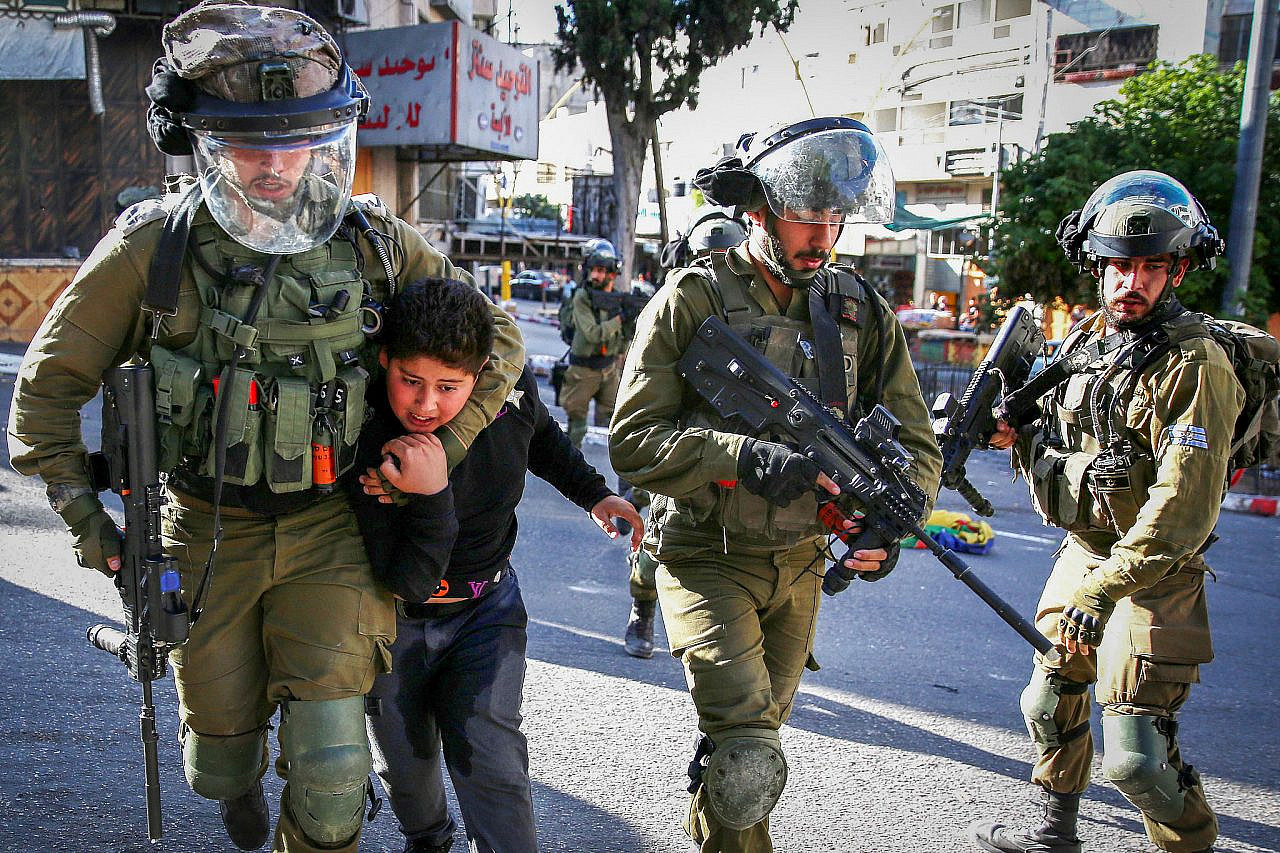 Israeli soldiers arrest a Palestinian boy as Israelis hold a tour of the West Bank city of Hebron during the Jewish holiday of Sukkot, September 23, 2021. (Wisam Hashlamoun/Flash90)

My own film, “H2: The Occupation Lab,” also became the target of a right-wing campaign last month, when the same organization that tried to ban “Two Kids a Day” managed to convince the mayor of the Pardes Hanna-Karkur Municipality in northern Israel to cancel two planned screenings at a local auditorium. A private restaurant that offered to host the screenings instead was subjected to a smear campaign by Btsalmo, which called to punish it through negative comments and ratings online. These days, the group is trying to prevent a screening of the film at Holon’s cinematheque, and letters attacking me and the film are being circulated on right-wing networks. Given the political atmosphere in Israel and the identity of the new government, this is only the beginning.

Known as an issue that drives viewers away and invites political pressure, the occupation has all but disappeared from Israeli broadcast channels and daily news. Yet it is still constantly featured on Israeli documentaries, which are screened locally and abroad. In recent years, the Israeli right has been honing in on these productions, as part of its ongoing effort to delegitimize any critical discourse on the occupation.

Given the tiny Israeli market, the local film and television industry depends completely on government support, and on regulations that oblige the satellite and cable companies to invest in local productions. So as a result, the right has started attacking these funding sources when they contribute to the production of critical documentaries – most of which is submitted through film funds, and through grants from the national lottery.

In 2019, the lottery tried to withdraw the prize money from the film “Advocate” after it won the Docaviv film festival. Advocate profiled Lea Tsemel, a well-known attorney who defends Palestinians accused of security offenses in Israeli courts, including those charged with terrorism. Back then, legal issues forced the lottery to follow through on the prize money that it had committed to give; yet the new Israeli government is planning a major reform to the legal system that would remove such checks on political decisions by state officials. 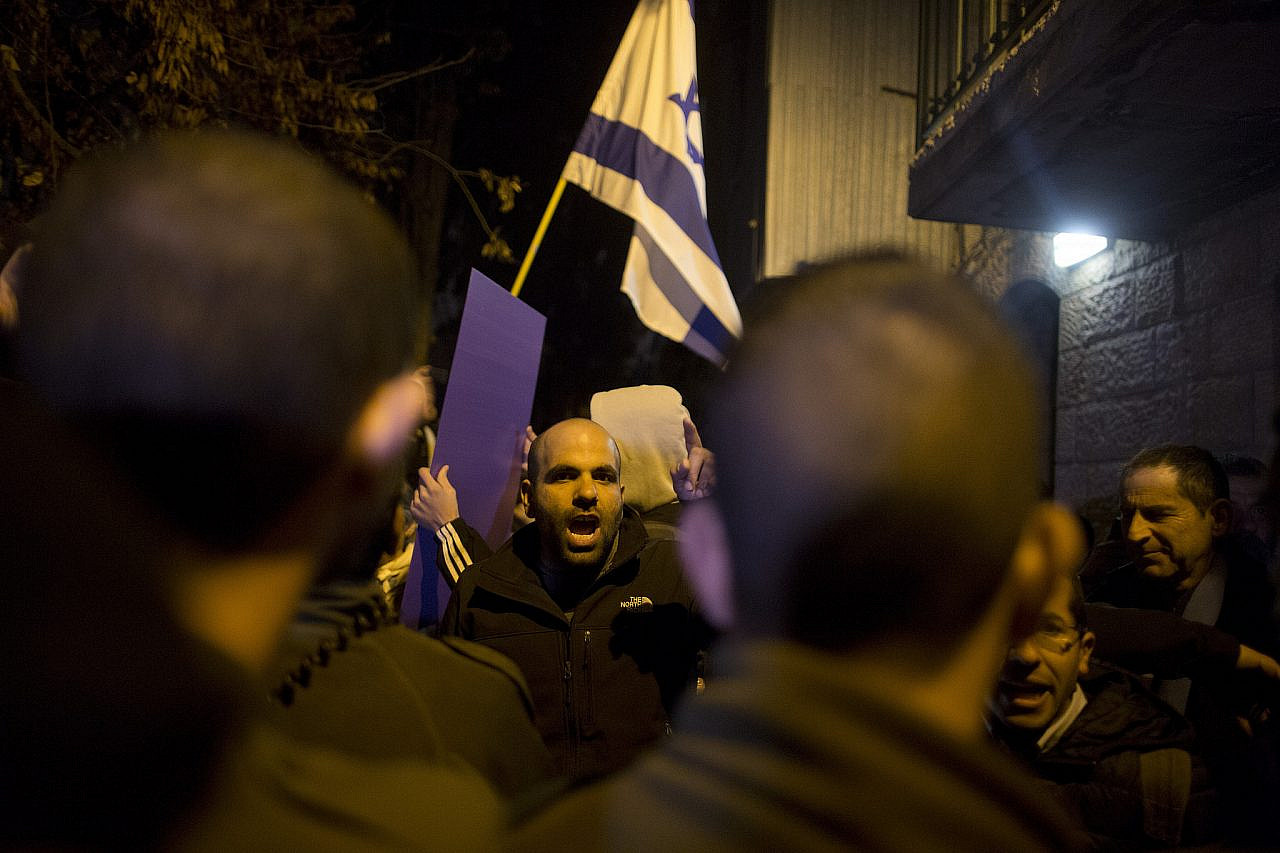 Right-wing activists protest outside Barbur Gallery in Jerusalem, following the Jerusalem Municipality’s announcement that it would close after it hosted an event with left-wing NGO Breaking the Silence, February 8, 2017. (Lior Mizrahi/Flash90)

The lectors and managers of these film funds are industry professionals, but judging from past experience and present statements, they will be put under serious pressure to politicize their selection. Already, the Rabinovich Foundation for the Arts has been forcing filmmakers to sign a declaration that their film won’t contain a message opposing the existence of Israel as a Jewish and democratic state, or “marking Independence Day as a day of mourning” — wording lifted directly out of the “Nakba Law” passed in 2011. Changes in the structure of the funds or the allocation mechanism are also likely, as the recent establishment of the Samaria Film Fund, dedicated to films by settlers, recently showed.

Meanwhile, Israeli government support is also frowned upon by pro-Palestinian activists, writers, and even some international industry insiders. While this objection comes from the opposite side of the political spectrum and is operating in a different political context, the result is the further narrowing of the space for critical engagement with the occupation within Israeli culture, at least until alternatives for government funding emerge.

Filmmakers are also subjected to shaming and delegitimization campaigns. The graphic calling for protests against “Two Kids a Day” circulating on social media last week described it as an “antisemitic film” supported by “people who promote the boycott of Israel,” and featuring Palestinians who tried “to murder women and children.” My own film was accused of claiming that the Israeli army conducts experiments on Palestinian children, along with the usual accusations of antisemitism, support for BDS, and incitement against the military.

A larger context of criminalization

It is true that the attempts to ban the films can also bring them attention, but the long-term impact on the film industry is troubling. Many smaller auditoriums and film programs, especially in small or right-leaning communities, will start thinking twice before scheduling a screening of a controversial feature, and the appetite of networks, lectors, and broadcasters to approve controversial projects is constantly diminishing. More importantly, this effort should be seen in a larger context of criminalization of any opposition to the occupation, along with the entire Palestinian narrative. The recent order by National Security Minister Itamar Ben Gvir to ban the Palestinian flag in public spaces is another such example.

Right-wing politicians are also calling for measures that would partly or completely ban filming Israeli soldiers or circulating videos that portray their conduct in a negative way. This notion of “protecting the armed forces” plays a major part in the attack on “Two Kids a Day” and “H2: The Occupation Lab.” Since the occupied territories are ruled by a military regime, limits on the filming of the army’s activities will translate into the criminalization of the very essence of human rights and journalistic work. 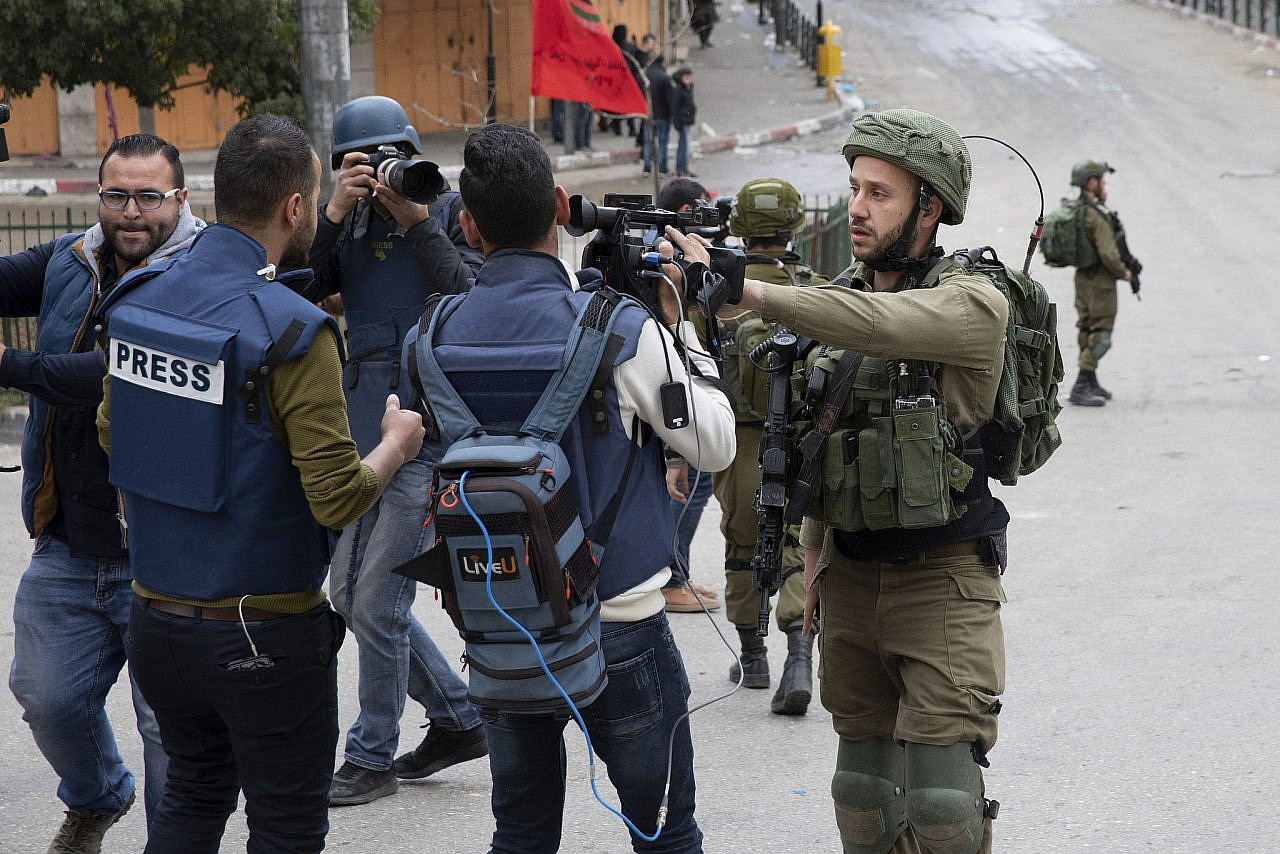 Israeli soldiers block journalists as hundreds of Palestinian and some Israeli and international demonstrators march in the West Bank city of Hebron calling to open the Shuhada Street, February 20, 2019. (Oren Ziv)

Within this context, it is important to note the landmark case of the film “Jenin Jenin” from Palestinian filmmaker Mohammad Bakri, which featured allegations by residents of Jenin Refugee Camp that Israeli forces committed a massacre there during its invasion of the city amid the Second Intifada. Veterans of units that took part in the operation successfully sued Bakri (whose film was supported by the Palestinian Authority, not by Israel), and last November, the Supreme Court upheld a verdict forbidding any screening of the film in Israel. The “Jenin Jenin” verdict set a precedent that places the burden of proof on filmmakers, who could, not far down the line, be forced to defend their editorial and artistic decisions before a court of law, and not in the sphere of a public debate, as had previously been the case.

The November 2022 election in Israel was a watershed moment that produced the most extreme government the country has known, led by ultranationalists and populists who include former members of Meir Kahane’s Kach party, deemed a terrorist organization in Israel and the United States. The government is planning an immediate reform of the judicial system that would lead to a rapid politicization of major institutions, from the police to the education system to zoning committees. In a country where government and taxpayer money play a major role in every field of life, the effect of this change cannot be overstated.

In the local and international media alike, these reforms are largely being portrayed as an “attack on Israeli democracy” — as if there exists an Israel that is separate from its military rule over and denial of basic rights to a civilian population for over half a century. But as the campaign to ban criticism of the occupation teaches, the true goal of the extreme right runs deeper: not only to cement its control in the political system and in all branches of government, but to establish a new political order; to take control of more land (by legalizing outposts and settlements, and displacing Palestinian communities), to deprive Palestinians of agency, outlaw their narrative and prosecute their political representation; to isolate and shame their Jewish supporters; and ultimately to criminalize any opposition to a political order of Jewish supremacy. These risks should concern liberal Jews and Palestinians alike, not in a distant future, but right now.