A new report by Al-Shabaka, the Palestinian Policy Network details the damage that consecutive Israeli military assaults have caused to Gaza’s water systems, whereby 95 percent of the water consumed in the Strip for decades has been unfit for human consumption. 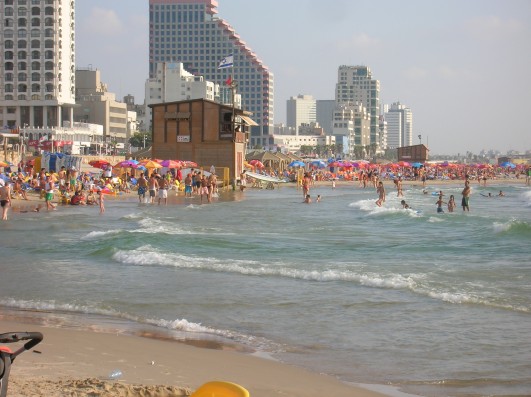 Palestinians in Gaza are starting to wake up from the shell-shock of Israel’s 51-day Ramadan Massacre, which left over 2,131 Palestinians killed (of which more than 500 were children), over 10,000 injured (more than half of whom are estimated to be permanently handicapped), and scores of homes and businesses demolished. Reality is bleaker than ever before. Nothing of the underlying reasons why Gaza exploded into a bloodbath has changed; Israeli and Egyptian closures of Gaza’s borders remain in place. However, one product is making its way freely across the border into Israel. Actually, this product flows undetected by the almighty Israeli military and rolls right up on to the shores of Tel Aviv. The product is Palestinian shit, or more accurately, to maintain the media bias of the times, Palestinian terrorist shit.

We Palestinians have no love affair with the Israelis relaxing on the shores of Tel Aviv. Many of these Israelis have no problem being high-tech professionals in the morning, throwing on their military uniform and participating in turning Gaza into a living hell on earth in the afternoon, then going for a relaxing swim with the family on the shores of Tel Aviv in the evening. However, we would advise Israelis, and all tourists to Israel for that matter, to please stop swimming in our shit. This practice is not only unhealthy for you and your children, but it is killing us, literally and figuratively.

Ninety-five percent of the water that Palestinians in Gaza have been consuming for decades has been proven unfit for human consumption. Electricity shortages that have lasted for almost a decade have limited water treatment capacity and thus the availability of water to households, as well as increased the discharge of untreated wastewater into the sea. Even before the summer assault on Gaza, 90 million liters of untreated or partially treated wastewater were being dumped and continue to be dumped into the [Mediterranean] sea each day due to insufficient treatment facilities.

While the Israeli government continues to maintain a total closure on the Gaza Strip, there is no chance the electricity needed to run the water and wastewater networks will be operational anytime soon.

In her policy brief, Ms. Dajani also depicts the water war being waged in the West Bank. She notes:

According to the Palestine-based coalition, Emergency Water, Sanitation and Hygiene for Palestine (EWASH), between 2009 and 2011, 173 different pieces of water, sanitation or hygiene infrastructure were demolished, including the confiscation of water tankers, which are used as an emergency measure when access to water is prohibited. Beyond the Israeli military’s systematic targeting of infrastructure in Area C [62 percent of the West Bank], residents of the illegal Jewish-only settlements have also been carrying out acts of vandalism and destruction that specifically target Palestinian water sources and frequently taking over natural springs for their own recreational use. Settlers can be seen as acting within a clear Israeli policy that sees such targeting of water resources as an acceptable method of warfare. 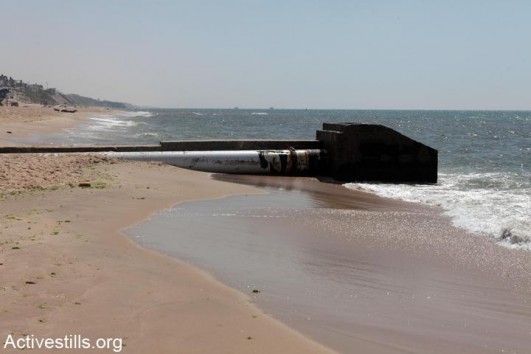 A sewage pipe empties directly into the sea near the refugee camp of Deir al Balah, Gaza, May 12, 2012. (photo: Activestills)

The damage being done has long-term effects, as Ms. Dajani goes on to write:

Many [Palestinian] communities depend on basic water sources such as wells, springs and cisterns to meet domestic needs; oftentimes this infrastructure was built decades, if not millennia, earlier and is badly in need of repair. Hundreds of such communities in the West Bank suffer from deliberate damage and destruction of their water sources. Rainwater cisterns, wells, irrigation systems, and water networks built in the pre-Roman period have been targets of Israeli military forces. The effects of destroying the water infrastructure are not limited to disease, absence of basic life necessities, loss of income, or development opportunities. Over the long term, Israel’s targeting of water infrastructure also deeply influences the relationship that Palestinians have with their land. By depriving farmers of water, they drive them off their land. Denying herders access to age-old cisterns cuts off traditional livelihoods and depletes resource-rich villages of jobs, families and traditions.

Given the Palestinian economy today is a donor-driven economy, Ms. Dajani is correct in her below statement to point to donors in an attempt to stop this Israeli aggression on our water system. Until donor funds reverse their political tendency from acquiescence to the Israeli occupation and assume the indigenous populations’ legal rights as part of their intervention mandate, nothing will change.

Donor intervention in the water field must go from providing temporary solutions to putting active political pressure on Israel so that its military forces cease their strategic destruction of water infrastructure. Money could then be invested in long-term development of infrastructure that would politically empower Palestinian communities at the grassroots, ensure access to clean water, and allow for the economic development of both the industrial and agricultural sectors. If Palestinians and the donor community could be assured that infrastructure was immune from Israeli attacks, the tides would turn on a policy that has left Palestinians high and dry.

The mass majority of Jewish Israelis prefer to just ignore anything Palestinian; to them we are invisible. Ever since the founding of the state of Israel, the policy has been clear: Uproot the Palestinian population using all means possible, legal and illegal, destroy Palestinian villages in an attempt to erase the crime, and rebrand anything left, like city and street names, in a policy the Israel government has long ago identified as ‘Judaization’ of the country.

Sadly, this conflict will not end soon. In the meantime, Israelis, please inform your kids not to swallow the seawater.

Sam Bahour is a Palestinian-American business consultant in Ramallah and serves as a policy adviser to Al-Shabaka, the Palestinian Policy Network. He blogs at ePalestine.com.

Related:
‘Israel wants us to be dependent on aid’: Gaza’s economy under siege
Visualizing Occupation: Distribution of Water
PHOTOS: 13 days without water in East Jerusalem