Sometimes the daily, petty nastiness of the occupation is encapsulated in the dismal theft of a few farming tools.

Ryad, who lives near Bethlehem area, has a small orchard with apricot, hazelnut, olive and fig trees. Near the orchard is an ancient agricultural structure, aged some 100 years, which serves Ryad and his family as a tool shed, as well as a resting place in the far too many hot days.

One day, Ryad was asked by his nephew, Khader, to hold a family barbecue by the shed. Ryad agreed. When Khader got there, however, he was shocked to see a few men, whom he would soon identify as Israeli civilians, attempting to damage the structure. Khader shouted at them and moved in their direction, and the three immediately fled.

When Ryad got there, after being summoned by Khader, he found that the Israeli civilians had not limited themselves to their attempt to destroy the structure: they also stole some agricultural tools and silverware that were in it. Why? Just because. 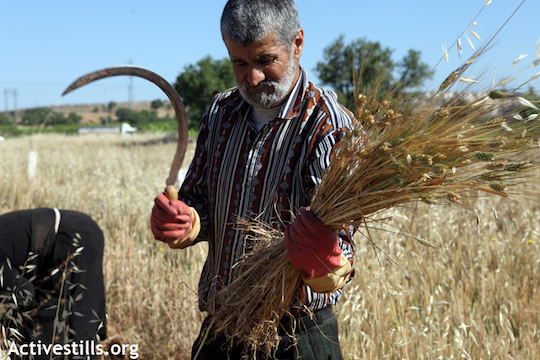 We’ve already become pretty much inured to the daily violence against Palestinians, whether coming from the military or civilians. We’ve grown used to it. After all, it happens so often you could mumble the excuses in your sleep: the soldier felt in danger, they were near the fence, they were somewhere they shouldn’t be, and anyway, you know what they would do to us if they only could. Violence toward a person can always be excused, if that’s your cup of tea. Just as rapists and their supporters can always find excuses for sexual violence towards women (she wanted it, why did she leave the house at such an hour, what kind of person walks around such places, why did a dress like that). Such excuses are necessary for any injustice. You want to be able to look in the mirror afterwards, after all; furthermore, you should be ready for a situation where such actions are routine.

“To plunder, to butcher, to steal: these they falsely name empire: they make a desolation and they call it peace.” These are piercing words by the Roman historian Tacitus in the mouth of the warlord Calgacus, planning his final battle against the Roman invader. To the insurrection of people fighting for their freedom, we give the misnomer of “disturbances of order”; land stolen from them by the cunning of jurists, is called “public lands”; coated steel bullets, “rubber bullets”; shooting an unarmed man, “the soldiers were acting in accordance with the rules of engagement.”

But while we’ve become accustomed to excusing violence toward persons, we still have a problem explaining away simple theft. Such incidents pierce the foggy veil of security. Every IDF veteran can easily recite all the excuses for why it is proper to fire a lead bullet from an assault rifle through the body of an unarmed child; but he’d have a hard time justifying the looting of the body. And such incidents allow us to see what lies beyond the veil of excuses.

And what we see, when all is said and done, is theft. Theft on the part of people living in a well-to-do settlement, enjoying all the munificence the government of a high-tech superpower can throw at them. The theft, as we’ve seen in an earlier case, of a donkey and a few obsolete agricultural tools. Did the thieves who broke into Ryad’s shed need those tools and utensils? Not likely. But they took them because they knew they could, and that nothing would happen. There would be no investigation, no indictment; they knew they were the lords of the land and that they could express their lordship by carelessly harming the property of others.

Is there, or can there be, any excuse – a security excuse, a national excuse, a religious excuse – for damaging a shed used by farmers for shelter and stealing their tools, tools which will not make much of a difference to the thief,  but for the victim, cause real damage to his ability to make a living?

And, behind all the bright shining lies that the Israeli civilians in the West Bank tell themselves – the “security needs” lie, the “redemption of land” lie, the “land of our forefathers” lie – can’t we see the same urge, the urge to better yourself at the expense of someone whose condition is far worse than yours? The urge to show your lordship by harming the defenseless? Is there anything behind the big words, aside from a small, dismal robbery?