After having their homes destroyed by the State over 30 times in the last two years, the residents of al-Arakib can do little else but watch as a forest is built on the ruins of their homes. 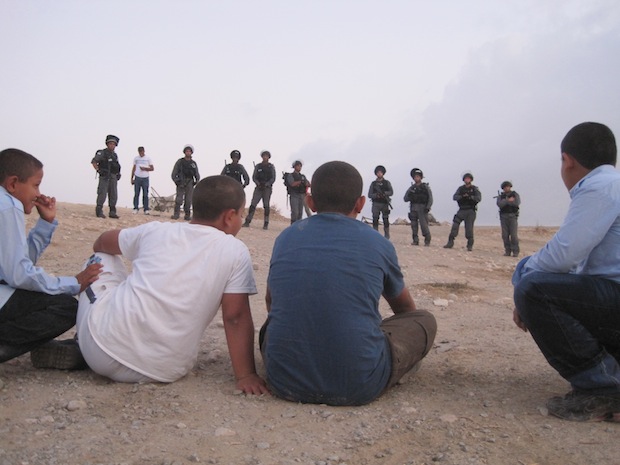 The Jewish National Fund resumed cultivating land Monday morning in al-Arakib, an unrecognized Bedouin village in southern Israel which the quasi-governmental agency has earmarked for a large forestation project. A week ago, the families in the village got word that the JNF would return and asked for activists to come and support them.

JNF equipment, escorted by heavy police presence, showed up Monday morning and sealed off the entrance to the village.  Families and activists watched from the village cemetery, the only spot that has been deemed untouchable due to its historic and emotional significance. Residents told +972 that JNF representatives gave their word in private conversations a couple of months ago that they would not plant on a specific plot of land – known as plot 24 – since it is the subject of an ongoing court case. However this morning they prepared this precise piece of land for cultivation.

Since July 17, 2010, the village has been demolished by the Israel Lands Administration (ILA) more times than anyone can count, and each time the families have returned and built it up again to confirm their claim on the land. Despite remaining steadfast in their claims to the land, most families have relocated to neighboring towns like Rahat to avoid the anguish of constant destruction, such that only a handful of residents still live inside al-Arakib.

Here is footage of the 25th demolition of the village:

The ILA claims the Bedouin are trespassing on state land, but the issue is still being fought in court proceedings over land ownership. While the residents do not have official land deeds, they do have documents from the Ottoman era showing their ancestors purchased the land in 1906. The state insists the land was appropriated in 1954 such that court findings regarding ownership before then are irrelevant anyway.

Critics of the plan have called it a “declaration of war” on the Bedouin community, since they are being treated like a security threat, and not as citizens with equal rights.

For more on Israeli policies regarding the Bedouin population, click here.