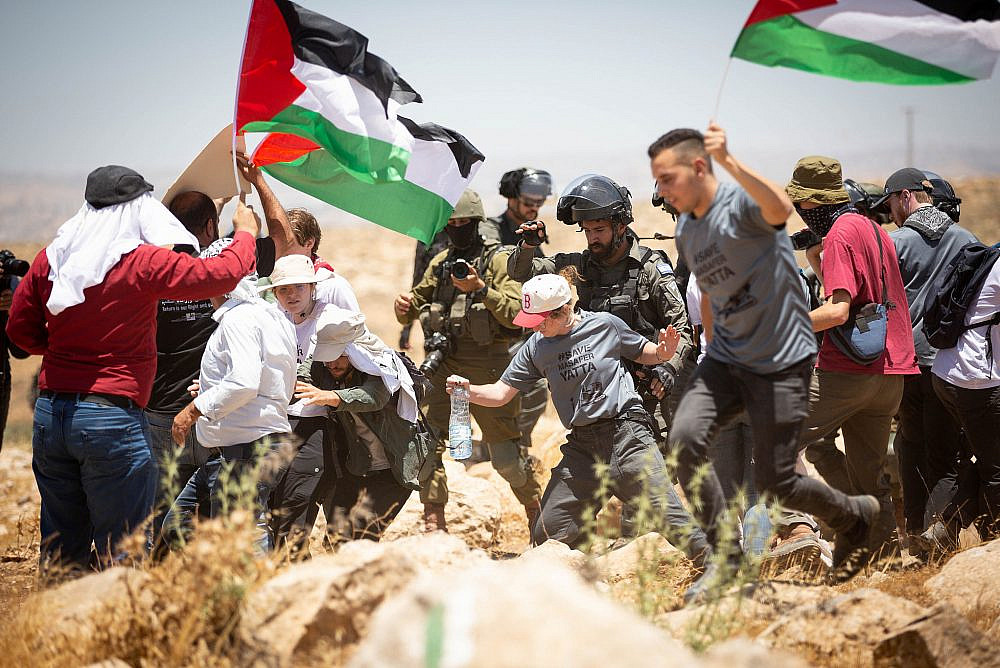 Images from Masafer Yatta are etched in my mind: the sun beating down on my skin as I look out over rolling hills, dotted by small clusters of homes connected by winding dirt roads. Rows of olive trees form green patches sloping up the valley in front of me, with flocks of sheep and goats making their way through prickly brush.

I could be looking out over any Mediterranean agrarian community with shepherds and farmers living in tune with the rhythms of the land, but this Mediterranean vista is plagued by heartbreak and shaped by resistance. These are the olive trees of Masafer Yatta, a region in the South Hebron Hills and under Israeli military occupation since 1967. There are twelve communities who care for these olive trees and tend to these sheep — and due to a ruling by the Israeli Supreme Court last month, eight of these communities with over 1,000 Palestinians could be forced out of their homes at any moment — with the justification that their land is needed for Israeli military practice.

If the Israeli government moves ahead with the destruction of Masafer Yatta, it would be the largest expulsion of Palestinians in decades. Now is the time for American Jews to do everything we can to support the Palestinians and Israelis fighting to prevent this catastrophe from taking place.

I visited Masafer Yatta because I believe Palestinian rights are an integral part of our Jewish future. The trip was organized by the Center for Jewish Nonviolence, which convened 36 Jews from the U.S., Canada, and the UK to join Palestinians in co-resistance alongside Israelis and internationals who have also joined the fight to #SaveMasaferYatta. Together, we are clear-eyed about the Jewish future we are building: one where Jews around the world are proud to be Jewish, where we share natural resources, respect the land and all the people who inhabit it, and trust each other as well as our non-Jewish neighbors. Forcing the removal of over 1,300 Palestinian shepherds and farmers who, in the words of a Palestinian from the region, “are connected to the land like a body to a heart,” actively works against this vision of our Jewish future. 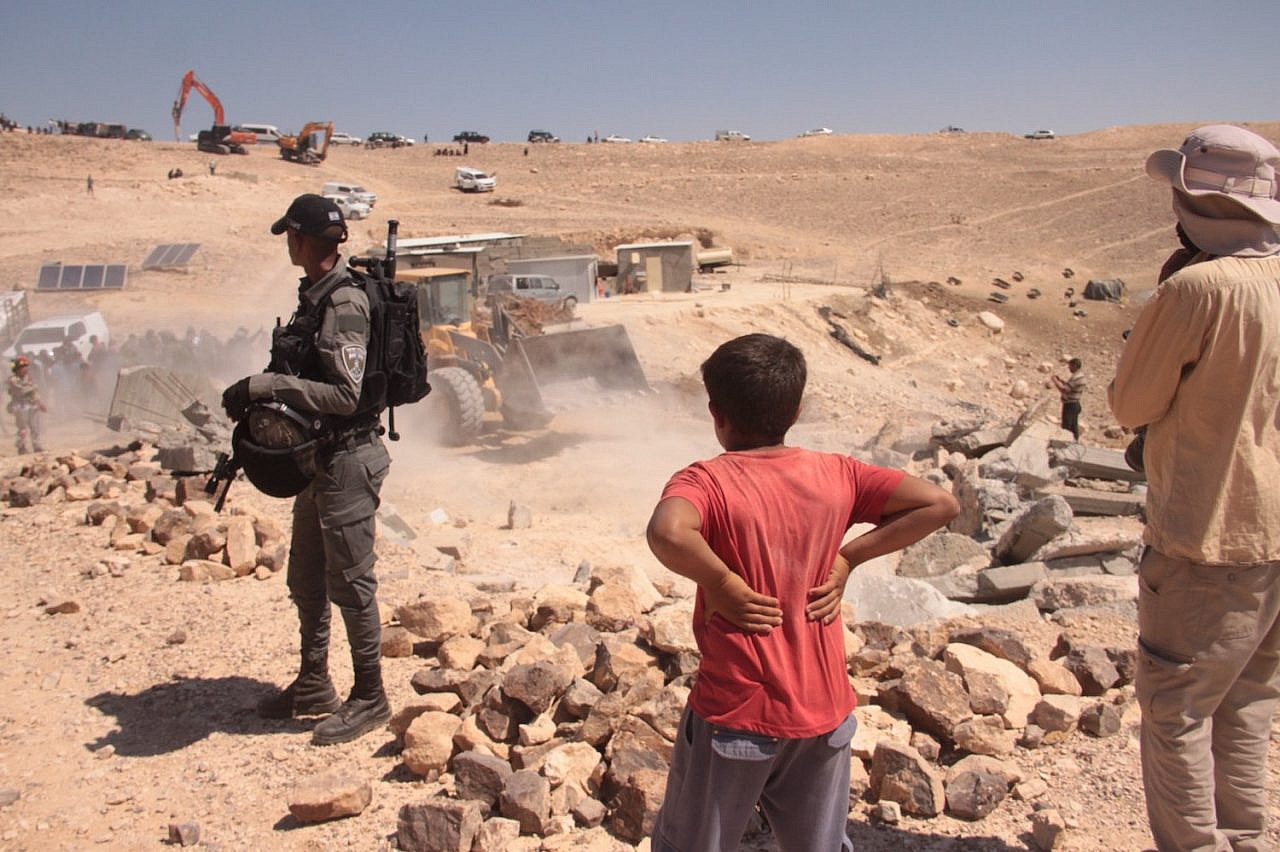 Without international pressure, it is very likely that these residents will be forced out of their homes. As American Jews, we have an important role to play in demanding that the Biden administration call on the Israeli government to cease demolitions in Masafer Yatta immediately — in large part because American economic and security interests are a significant driving force upholding Israel’s military occupation. Furthermore, U.S. political pressure played a crucial role in preventing the destruction of other Palestinian communities such as Susiya and Khan-al Ahmar, and American Jews were an important constituency supporting political pressure in those moments.

Without a clear moral call from the Jewish community, the Biden administration can remain silent under the justification of “supporting the Jewish people,” when in reality President Biden himself has made it clear that Israel serves American interests: “If there were not an Israel, we would have to invent one to make sure our interests were preserved,” the president said during the 2013 J Street conference.

We can and we must unite as American Jews to reject a vision of American security that invests in weapons and bulldozers instead of schools and affordable housing, and to demonstrate that real allyship to Jews means supporting and protecting the human rights of everyone in the region — with no exceptions. Our moral outcry is anchored in the Jewish tradition, which clearly states that the path to a vibrant Jewish future is one where we welcome and affirm the life of all people. As the Jewish prophet Isaiah says: “The children of the foreigner [non-Jew]… I will bring them to my holy mountain, and make them joyful in my house of prayer… for my house shall be called a house of prayer for all nations” (Isaiah 56:7).

Yet as I look out across the landscape of Masafer Yatta, I see no evidence of these values. Everything I see indicates that Palestinians are unwelcome: rapidly expanding settlements creeping closer and closer to Palestinian villages, red and white checkered water towers and electricity poles delivering utilities exclusively to Israeli settlers, and concrete rubble littering the landscape from recent Palestinian home demolitions. 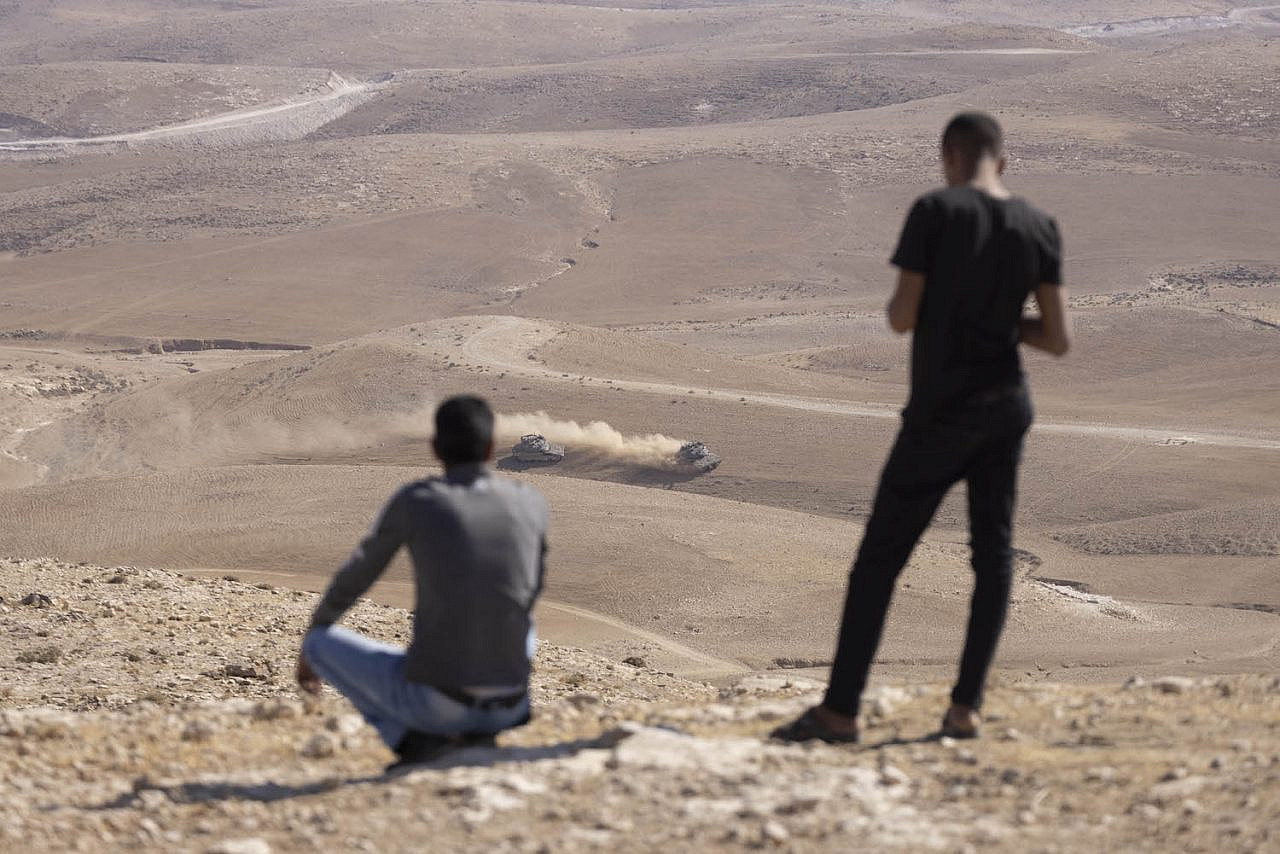 Palestinian residents from the village of Al-Majaz look on as the Israeli army trains in Masafer Yatta, June 21, 2022. (Oren Ziv)

With compassion, I hold close to my heart the centuries of Jewish persecution and expulsion that led many Jews to feel that we must fight for ourselves and only ourselves. But we have to believe that there is another way — that we are not alone in the fight for Jewish safety, and that we can build a stronger and broader base of allies when we see our struggles as interconnected. I know that many of us are scared when it comes to envisioning a different kind of Jewish future, one where equality and justice prevail, where Palestinians, too, have rights and are considered equal under the law.

But if we can move beyond the sense of scarcity driven by both American and Israeli governments advocating for security for some but not others, it is clear as day that Jewish safety and Palestinian rights are intertwined. Jewish and Palestinians thought leaders such as Peter Beinart and Lubnah Shomali are already imagining the benefits of what equality under the law could mean for both Palestinians and Israelis, ensuring a sustainable future for all people.

The Palestinian activists in the region are grounded in sumud — the Arabic word for steadfastness — marking their pride in living so close to the land and their unwavering resistance to forced removal. We too can join them, alongside Israelis, with steadfastness and pride, by showing that Jewish safety and Palestinian rights are not a zero-sum game and daring our elected leaders to join us in this vision.

President Biden is traveling to Israel-Palestine this week, and his agenda lacks a visit to any Palestinian community under threat of destruction. American Jews must show that protecting Masafer Yatta is a necessary step for the Biden administration to support a thriving future for all people: for Palestinians, Israelis, and Jews across the world.

Davida Ginsberg is a Boston-based Jewish organizer and activist with IfNotNow.