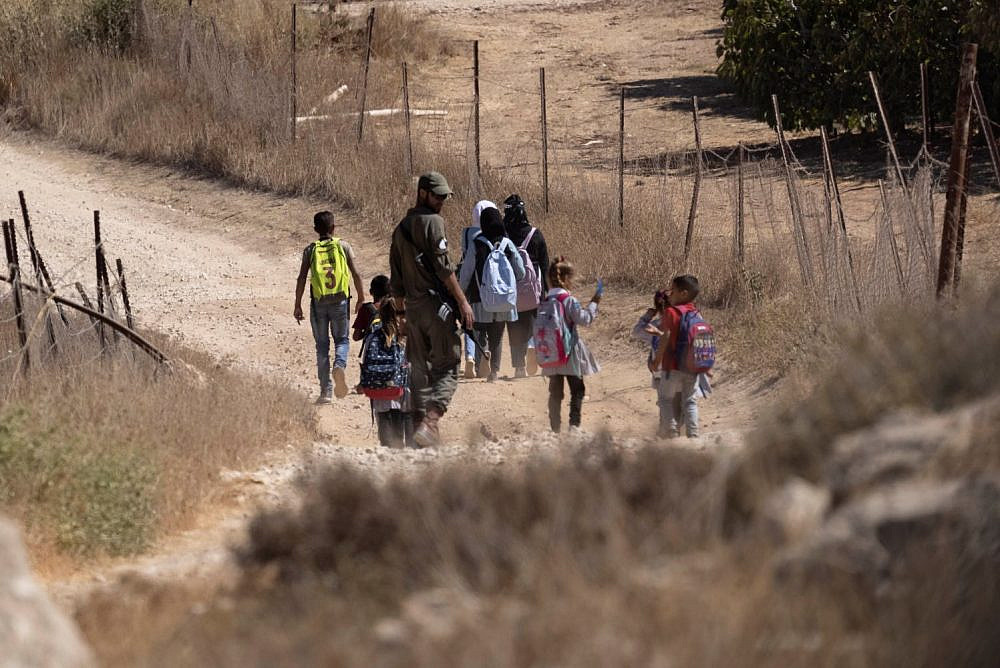 Israeli soldiers accompany Palestinian students heading back home to the village of Tuba, at the end of their school day in the village of A-Tuwani, as they walk on a two-kilometer dirt road by the Israeli settlement of Maon, West Bank, September 28, 2021. (Oren Ziv)

I was shocked when one of my friends, who, like me, is a teacher in the Masafer Yatta region of the occupied West Bank, told me that he believes the Israeli occupation is making teachers and students alike come to hate education. But the more I thought about it, the more I understood what he meant.

The residents of Masafer Yatta, where I live, are living through some of the most difficult days of their lives. The decision of Israel’s Supreme Court in May to displace eight Palestinian villages in the area — supposedly in order to clear the way for military training exercises, but in reality as a means of ethnically cleansing Palestinians — has destroyed the lives of the hundreds of people who have lived in these villages for generations. One of the biggest casualties of this decision, and of Israel’s efforts to further entrench the occupation, has been education.

The four schools serving children from Masafer Yatta are all now under immediate threat of demolition. Knowing this fact makes it difficult for both students and teachers to feel emotionally settled in their schools, while the constant presence of soldiers has created a hostile environment.

The intensification of military training exercises in the area following the court ruling has only added to this presence, with soldiers now routinely stationed at the entrances and exits of villages, as well as between them. This situation makes it difficult for Palestinian teachers to even reach their schools; indeed, soldiers have detained teachers for several hours while on their way to school. 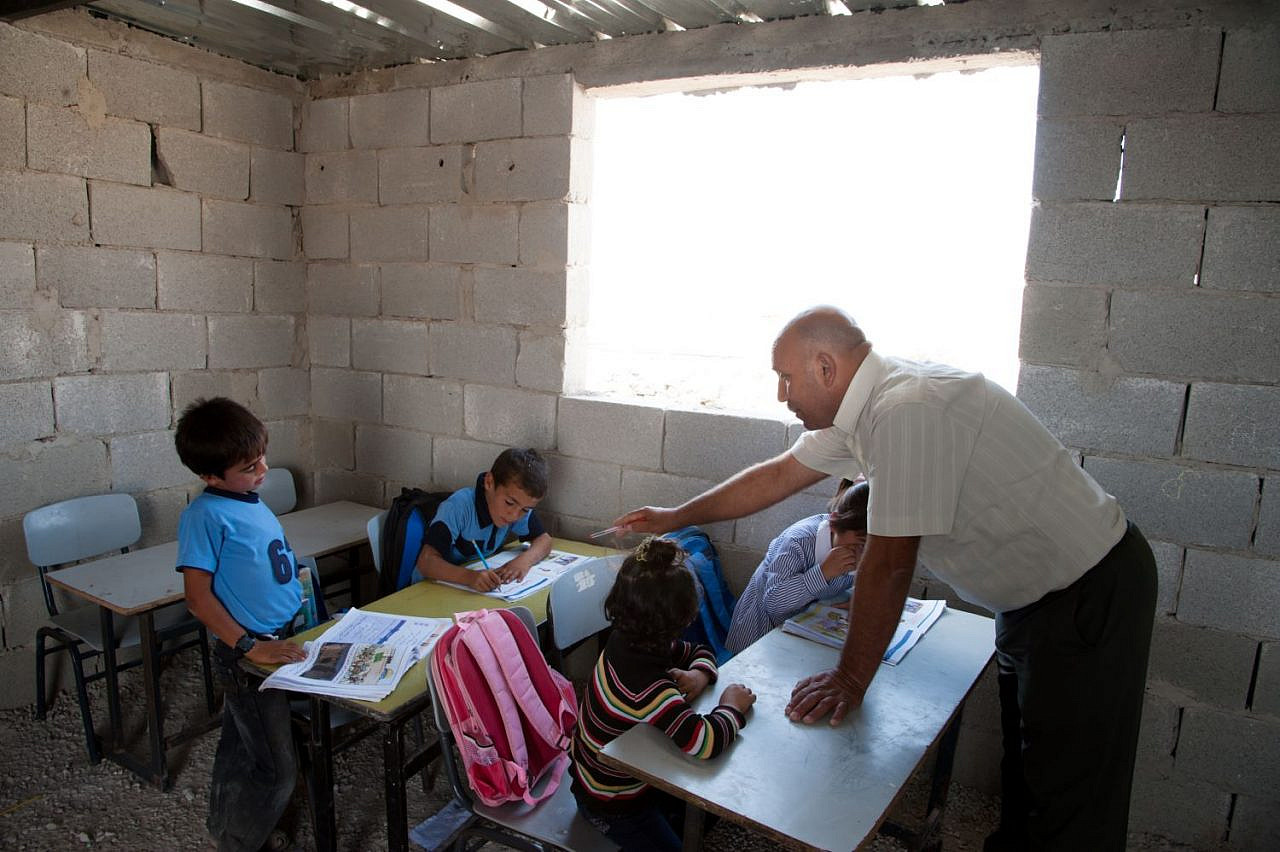 A Palestinian teacher speaks to his students in a school slated for demolition in the village of Al-Fakheit, Masafer Yatta, occupied West Bank, October 17, 2012. (Ryan Rodrick Beiler/Activestills)

Mahmoud Al-Amour experienced this firsthand. “On the first day of this school year, there was an Israeli checkpoint with tanks at the entrance to Masafer Yatta,” he explained. “They detained the school teachers in the village of Jinba and confiscated their car. They released the teachers and made them walk a long distance in the summer heat, while the driver, who was also a teacher, remained under arrest until 6 that evening.”

Khalil, another teacher, explained that this kind of harassment causes great psychological harm not only to teachers but also to their students, who end up waiting long hours for their teachers to arrive. School starts at 8 a.m., but in Masafer Yatta, teachers might be three or four hours late — if they are able to make it at all.

In addition to detaining teachers on their way to school, the Israeli army regularly confiscates their cars. In recent months, six cars have been confiscated from teachers en route to school. They have yet to be returned.

Mahmoud, who also teaches at a school in Masafer Yatta, recounted his experience: “In the month of Ramadan, on the way home, two military vehicles stopped us. They made us get out of our car, searched it, and confiscated it, leaving us to walk home under the scorching sun. We were fasting and we felt very thirsty, as if we were going to perish; we explained this to the soldiers, but to no avail.”

“It was a very difficult day,” Mahmoud continued, “and the cost of the car that was confiscated was about NIS 11,000 [around $3,200]. This is a great loss. But we remain steadfast on our land and in our schools to ensure that our students have their education, just like children anywhere else in the world.” 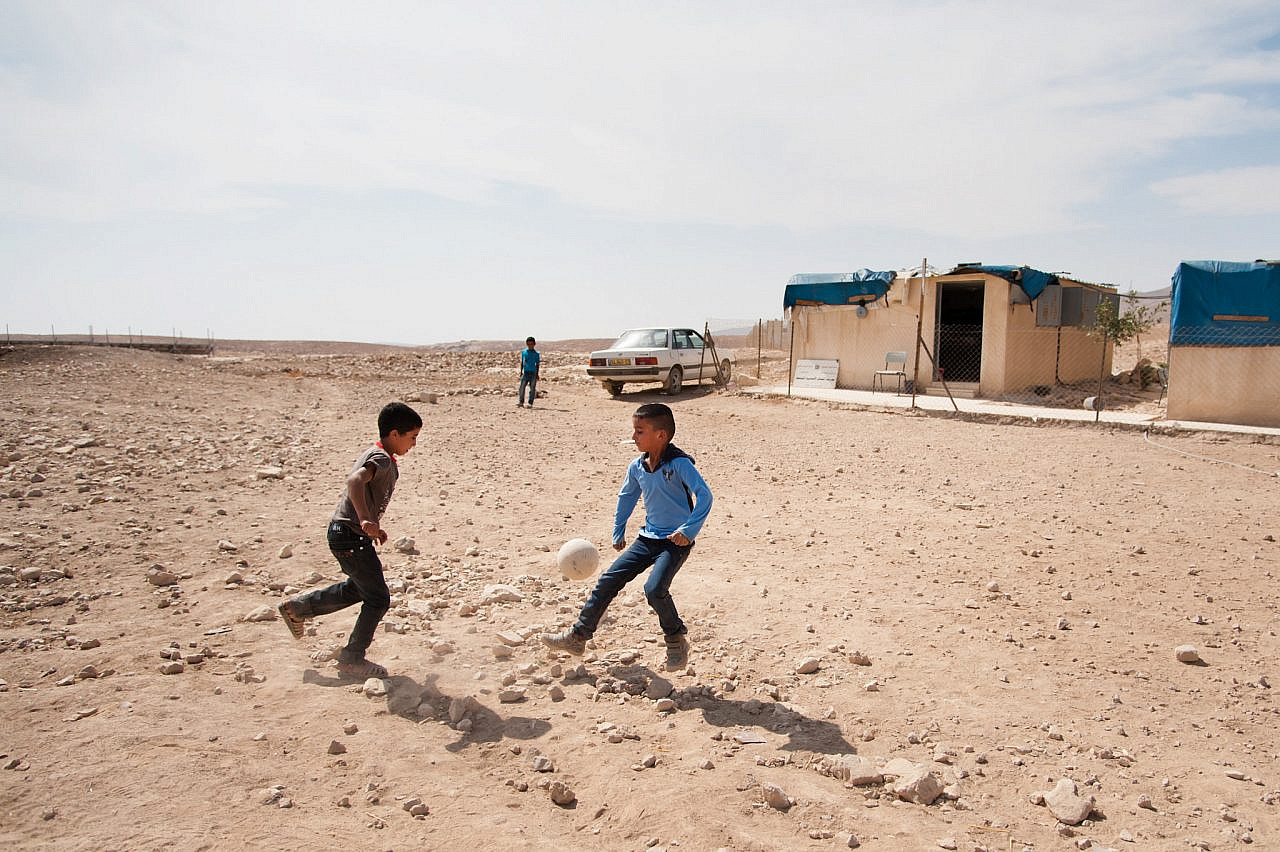 Students also face real problems trying to reach school, including being detained for hours under the strong sun without cause. In some cases, including just last month, students lost consciousness from heatstroke. These continuous injustices of the occupation have led to students frequently missing school; some have even dropped out because of these conditions.

Another teacher, who preferred to stay anonymous for fear of retribution by the occupation authorities, said: “We are scared of the situation, as are our students, and I’m really scared that the schools will be demolished soon. If that happens, the children will live through a catastrophe that they will never forget.”

The greatest impact of these repeated attacks on education in Masafer Yatta will be borne by the students themselves. While some of them still have dreams they hope to achieve through education, others have come to hate education. And there is no doubt that these attacks are part of a broader strategy of the occupation that aims to thwart a new generation of Palestinian youth, who will lack the education to advance themselves and build their communities.