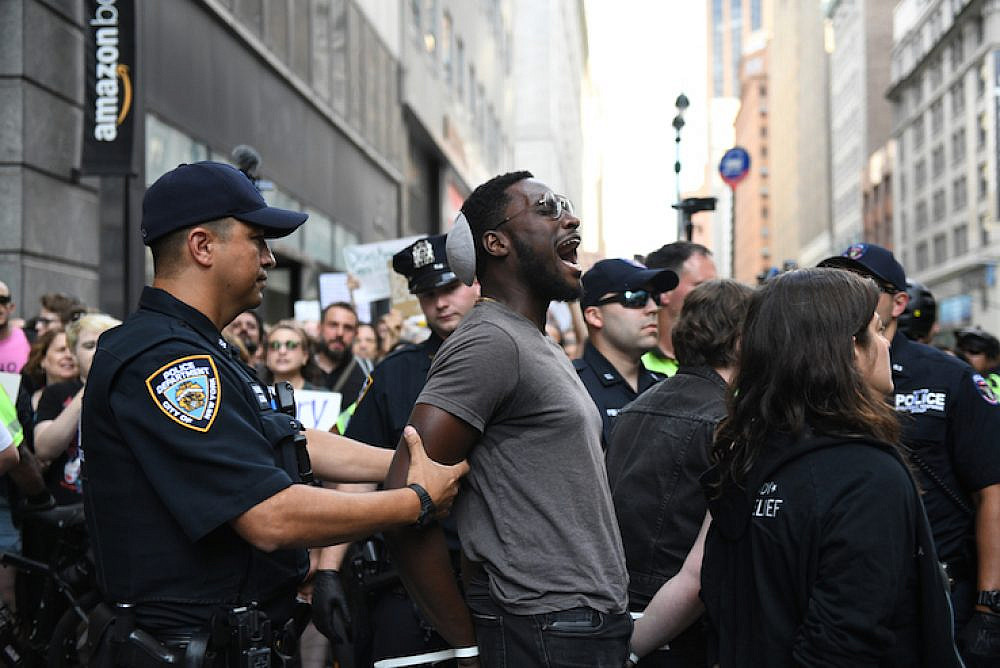 Kahanism made a comeback in 2019 when, for the first time in over 30 years, a proper party molded in the Jewish supremacist image of Meir Kahane tried to enter the Knesset in both elections. But is the rise of a party that advocates for theocracy and ‘total war’ against Palestinians as unprecedented as the outcry has suggested? Read Natasha Roth-Rowland’s analysis. 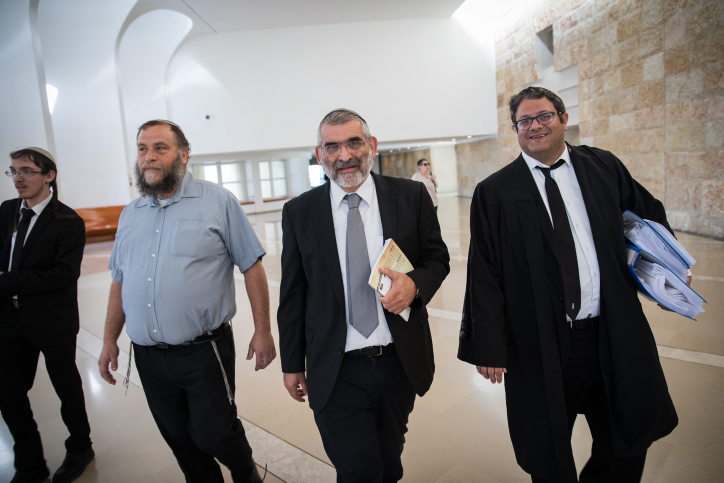 24. From heat waves to ‘eco-apartheid’: Climate breakdown in Israel-Palestine

2019 was the year Israel’s nascent climate justice movement tried to get the government’s attention. But Palestinians under occupation and siege — those most vulnerable to the dangerous effects of climate catastrophe — have largely been left out of the conversation. It means that a coordinated effort to combat warming temperatures, water shortages, and erratic weather, is next to impossible. Read the article here. 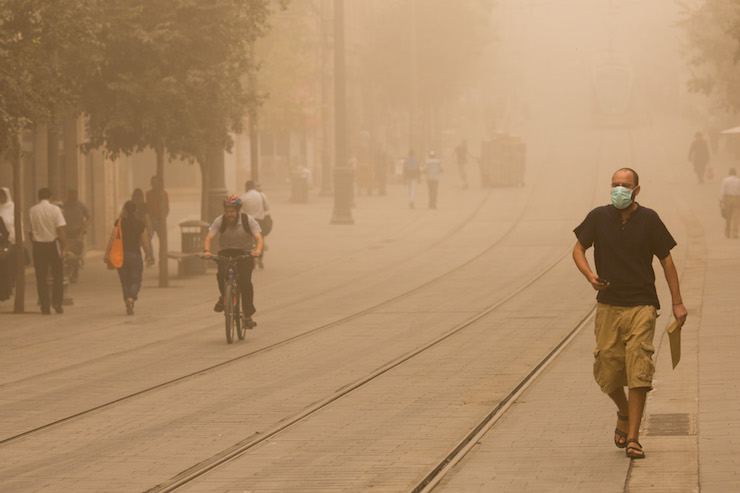 23. The Israeli right wants to keep Hamas in power

Forget everything you were told about Israel and Gaza. The three rounds of violence this past year made it abundantly clear that the Israeli right — from its politicians to its intelligentsia — prefers to keep Hamas in power. Meron Rapoport explains. 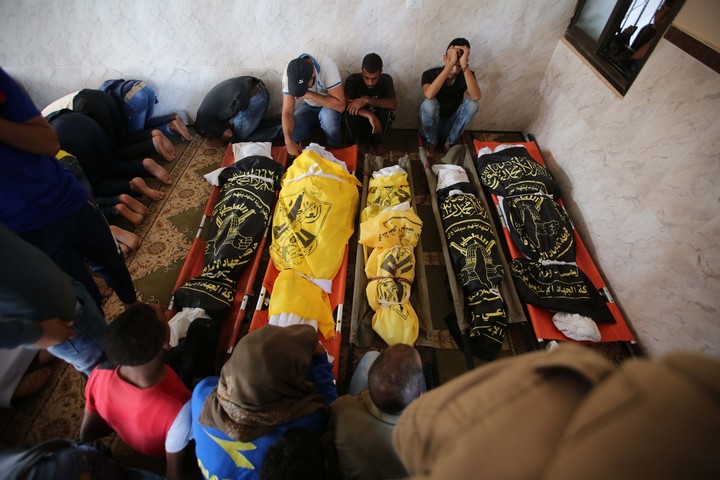 22. Jews, Arabs much less divided than Israeli politics lets on

A poll conducted by +972’s Dahlia Scheindlin in the run-up to the first election of 2019 revealed that most Palestinian citizens would support their parties joining an Israeli government. Israeli Jews, however, were far less willing to allow Palestinians to hold positions of power. Click here for more. 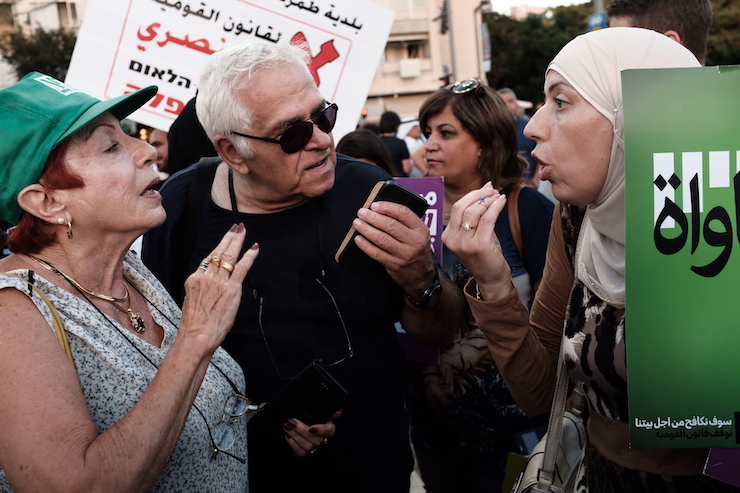 Jewish and Palestinian citizens of Israel at a protest against the Jewish Nation-State Law in Tel Aviv’s Rabin Square, August 11, 2018. (Tomer Neuberg/Flash90)

According to Dr. Dmitry Shumsky, the forefathers of Zionism did not, contrary to popular belief, initially envision a state based on Jewish supremacism, but were open to ideas of federalism and bi-nationalism. And yet the Zionism that came to dominate Jewish politics in Palestine, would inevitably come to involve the oppression of Palestinians. Read the full interview here. 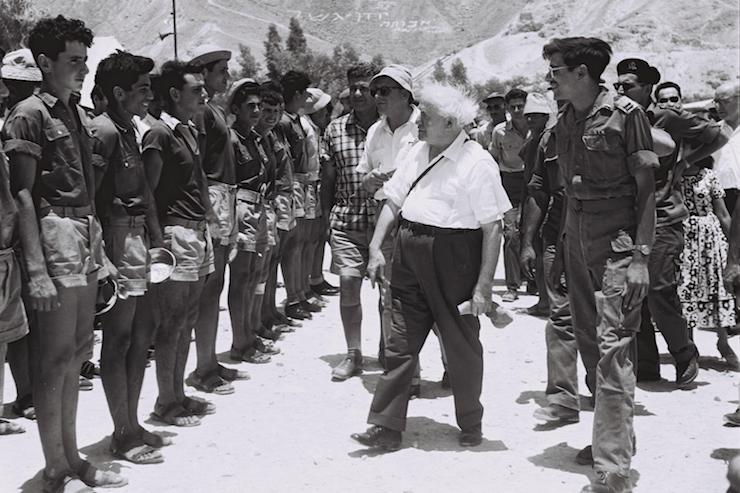 20. No, escalations do not begin with rockets on Israel

Israel might have the power to tell itself and the rest of the world that it is the victim vis-à-vis Gaza. In reality, it has been abusing two million besieged Palestinians for over a decade, writes Orly Noy. 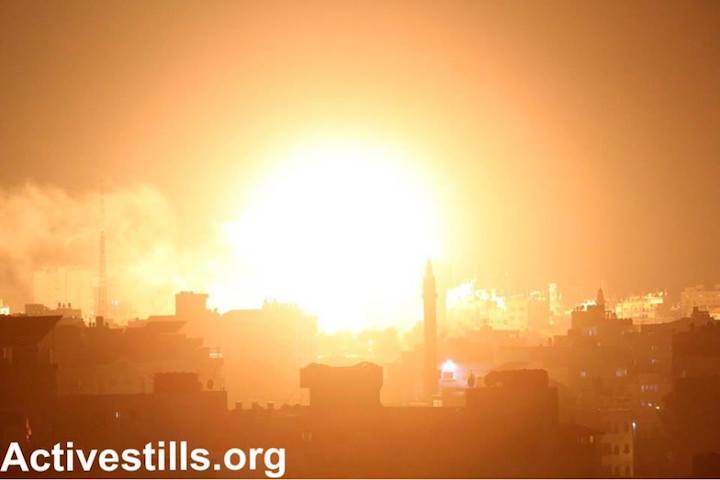 From approving brutal interrogation techniques to writing false medical reports, doctors in Israel have always taken an active role in the torture of Palestinian prisoners. Here’s what that looks like. 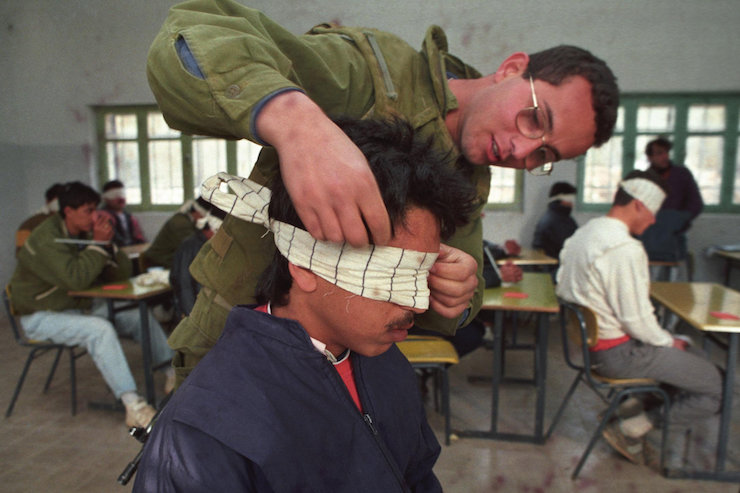 They grew up on the myths of a heroic Jewish state, joined Zionist organizations, and learned the hasbara talking points. But something along the way made them question everything. Click here for more. 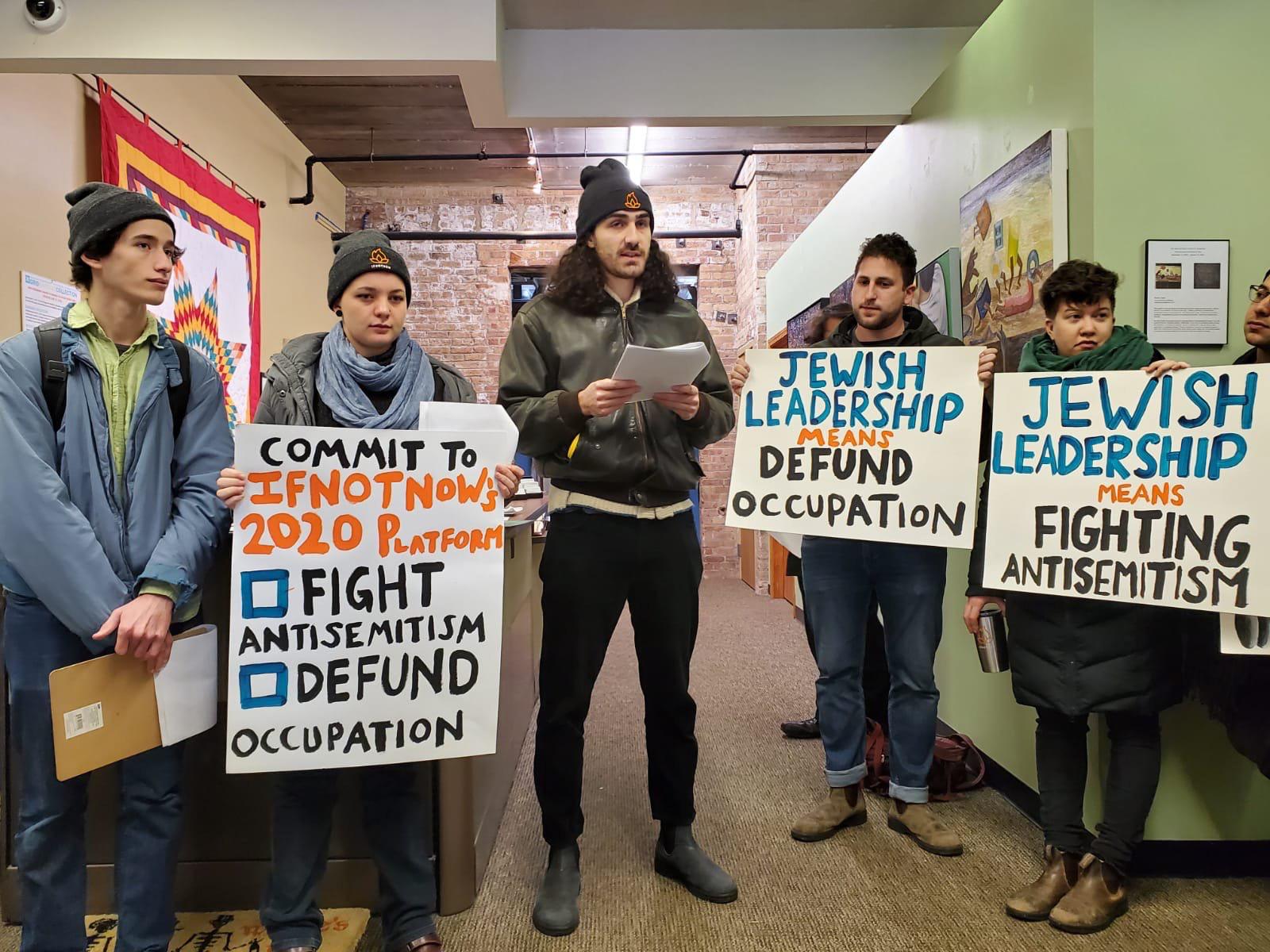 2019 began with calls for the leadership of the Women’s March to resign amid allegations of anti-Semitism. In her first interview following the controversy, Jewish then-director of communications Sophie Ellman-Golan spoke to Mairav Zonszein about confronting anti-Jewish prejudice within the movement, the attempts to delegitimize the organizers, and how the March put forth a more inclusive vision. Read it here. 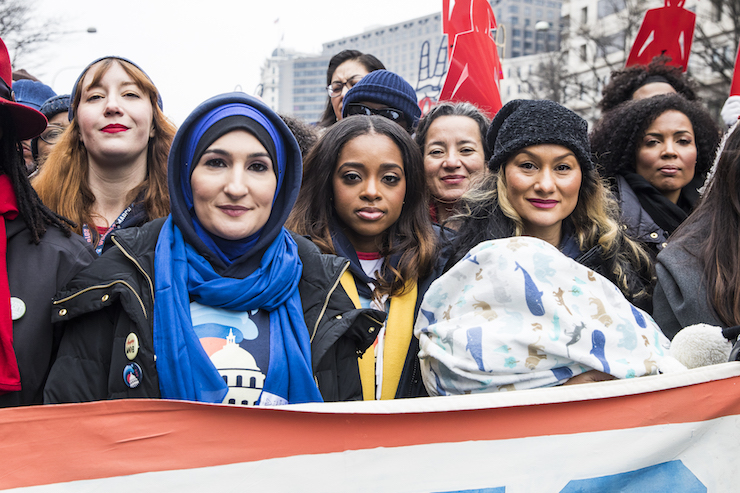 Congresswoman Ilhan Omar was accused this year of anti-Semitism not because criticizing Israel is anti-Semitic, but because the pro-Israel lobby has done a great job of making the American public and Congress believe that story. Read the full op-ed here. 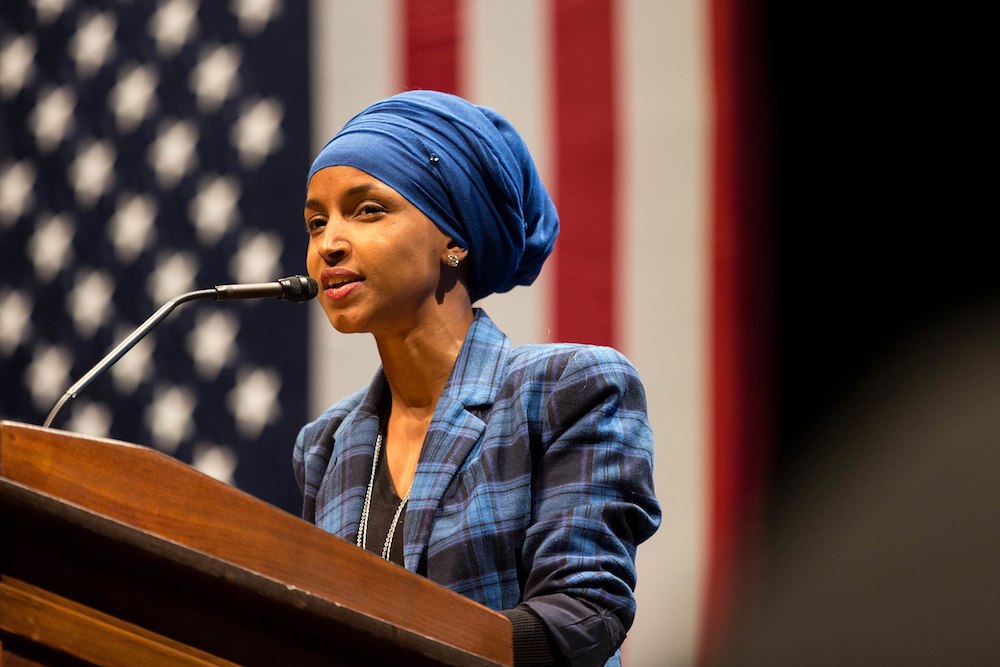 15. Modi’s policies in Kashmir look a lot like Israel’s rule over Palestine

Over the past year, Indian Prime Minister Narendra Modi took a page straight out of the Israeli playbook when he put the northern region of Kashmir under lockdown, revoked the territory’s autonomy, took repressive steps against the country’s Muslim population, and plunged the region into chaos. Read Abdullah Moaswes’ analysis here. 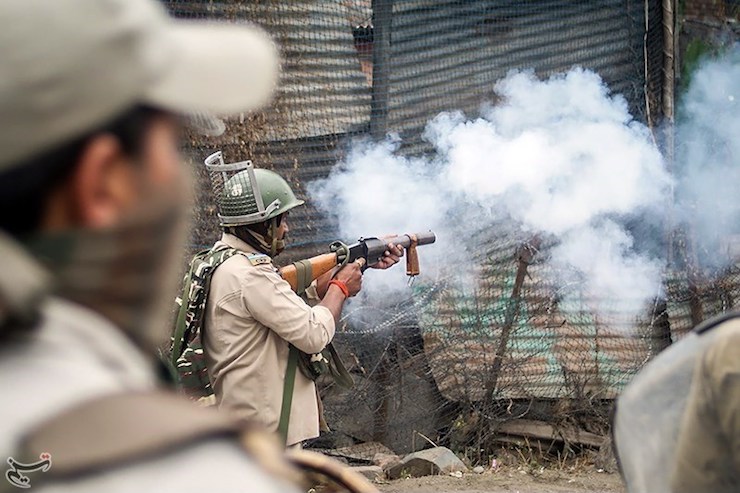 The uproar by Jewish establishment figures following Michelle Alexander’s New York Times essay this year, in which she wrote explicitly in support of Palestinian rights, echoes the reactions of white Americans to the Civil Rights Movement decades ago, wrote Amjad Iraqi. 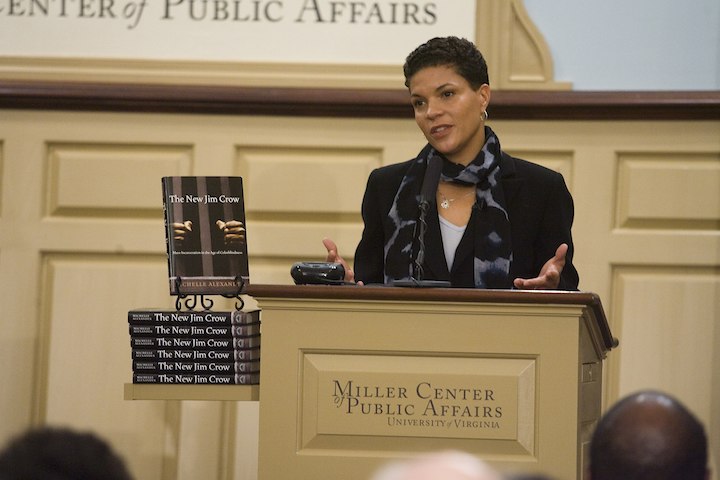 Newly-uncovered documents revealed how Israel established a committee of its top academics in the days following the start of the occupation, tasked with devising policies to pacify the Palestinians and make them leave the West Bank and Gaza permanently. Read the full story here. 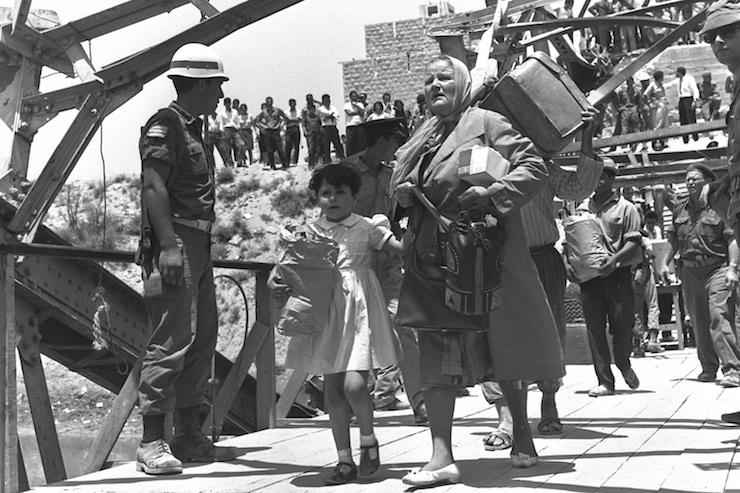 Palestinian families who fled to Jordan during the Six-Day War return to the West Bank through Allenby Bridge under an Israeli agreement with the Red Cross, July 18, 2019. (Teddy Brauner/GPO)

12. Cory Booker and Kamala Harris miss the progressive wave they seek to ride

Senators Booker and Harris’ hawkish records on Israel stand at odds with a Democratic voting bloc that is increasingly connecting Palestinian rights to a host of other racial and social justice issues, writes Rebecca Pierce. 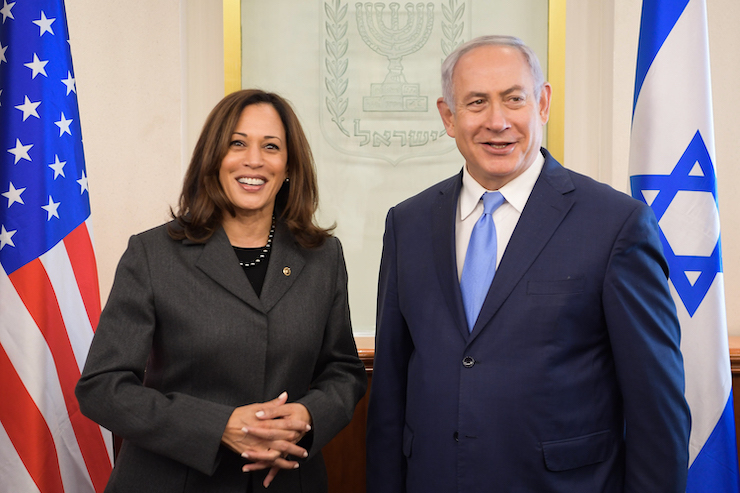 The year began with a group of Mizrahi academics and activists demanding that Israel’s High Court strike down the Jewish Nation-State Law, saying it erases their cultural legacy and perpetuates injustices against both them and Palestinian citizens of Israel. +972’s Orly Noy, one of the signatories of the petition, wrote about it here. 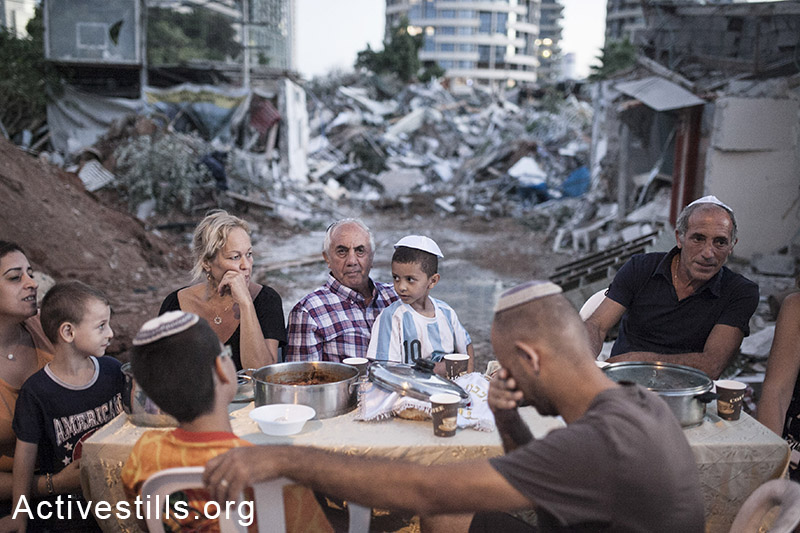 Jewish Israeli families sit at an improvised Shabbat dinner table near the remains of their demolished homes in the predominantly-Mizrahi Tel Aviv neighborhood of Givat Amal, September 19, 2014. (Shiraz Grinbaum/Activestills.org)

10. Who gets to vote in Israel’s version of democracy?

For a country that has gotten used to holding multiple elections in the span of a single year, you’d think Israel had this democracy thing down. Here’s the thing: not everyone living under Israeli rule gets a vote. Michael Schaeffer Omer-Man broke down who has rights and who doesn’t. 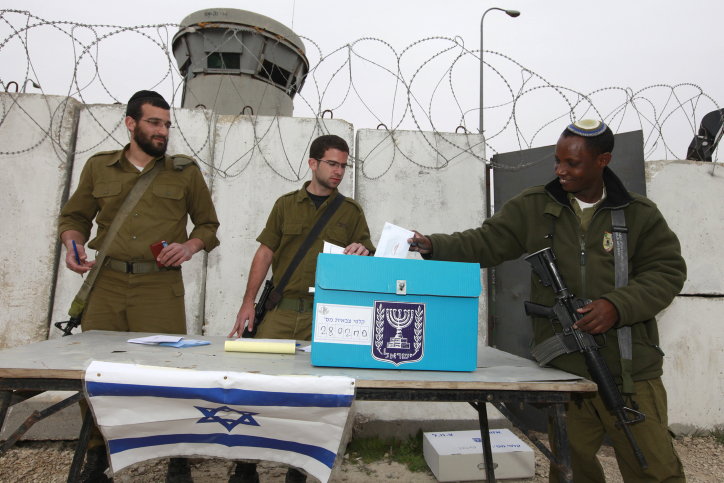 Illustrative photo of Israeli soldiers voting at a portable ballot box, near Bethlehem in the West Bank. (Nati Shohat/Flash90)

9. Distorting the definition of antisemitism in order to shield Israel

The IHRA initially sought to combat racism against Jews and Holocaust denialism, but as the past year in both the U.S. and in Europe has shown, its definition of anti-Semitism has served as a tool to silence all criticism of Israel, making it harder to identify actual forms of anti-Jewish hatred. Read the full article here. 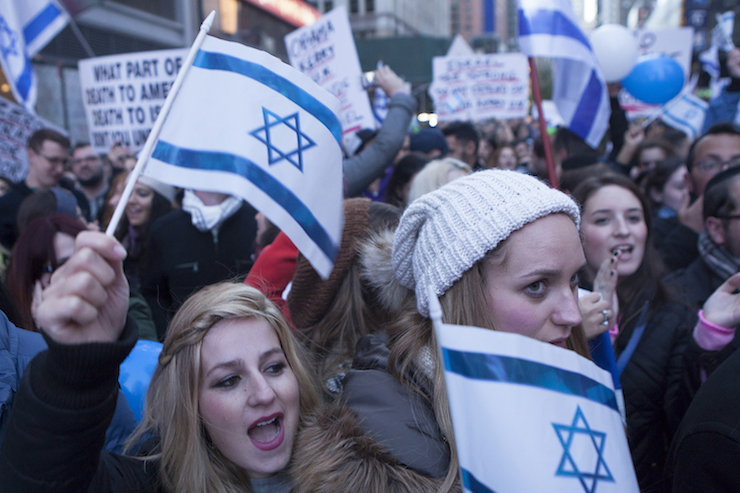 8. How Israel helped prop up Rwanda’s Hutu regime before the genocide

Israel refuses to come clean about its links with the murderous Hutu regime that carried out the genocide in Rwanda 25 years ago. But Foreign Ministry documents show that Israel was aware of the massacres against the Tutsi minority way back in the 1960s — and turned a blind eye. Eitay Mack uncovered the story here. 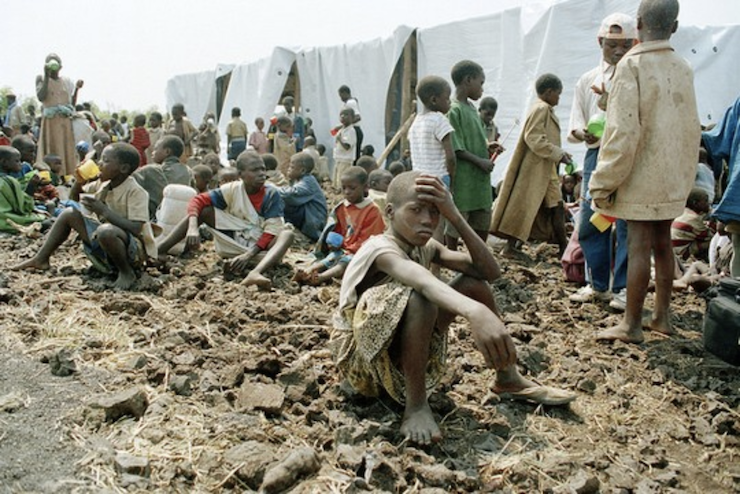 Rwandan children at a refugee camp in Goma, Democratic Republic of Congo, during the Rwandan Genocide. (UNAMIR)

A promotional video put out by COGAT, the unit of the Israeli Defense Ministry charged with administering the occupation, made us all turn our heads before shaking them. Here’s the gist: An American serving in the Israeli army in Hebron says that her job controlling the movement of Palestinians inside the occupied territories serves as a “conversation starter” whenever she meets Palestinians from the U.S. who, back in her home country, would actually have the same exact full rights as her. You can’t make this stuff up.

6. The year Jewish Voice for Peace declared itself anti-Zionist

In a wide-ranging interview about the group’s decision to come out as opposed to Zionism, former JVP director Rebecca Vilkomerson spoke to Michael Schaeffer Omer-Man about how to fight the conflation of anti-Zionism with anti-Semitism, attacks on Black-Palestinian solidarity, and the broader political moment for Israel-Palestine. 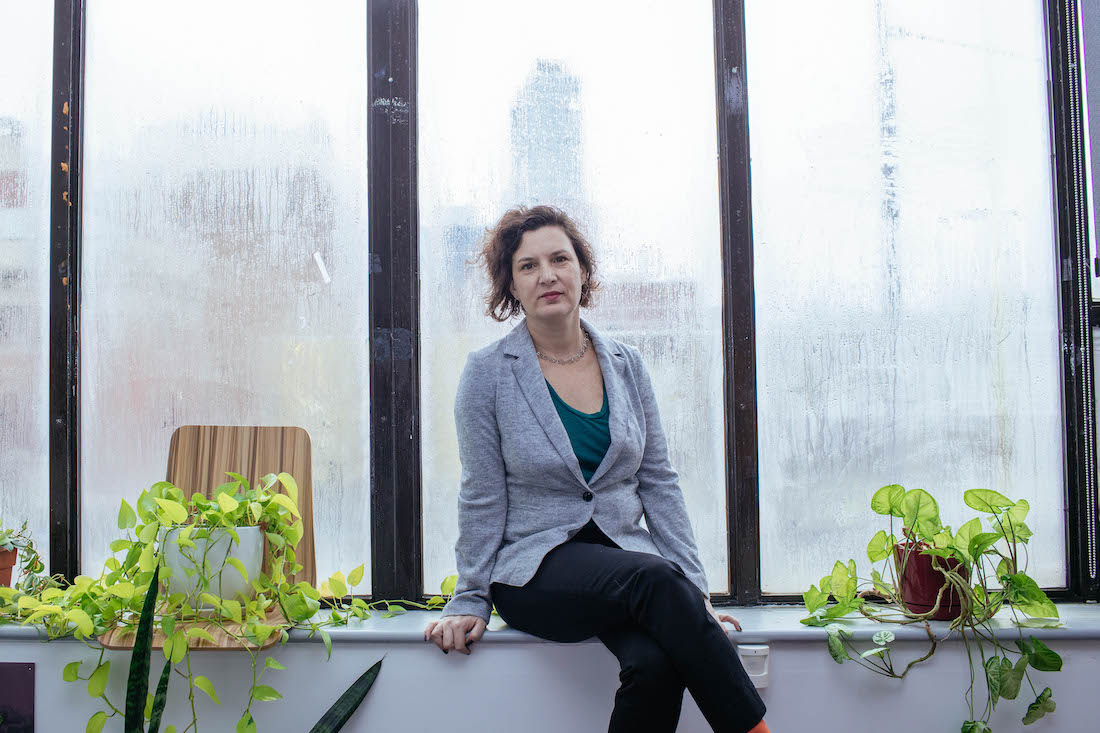 Rebecca Vilkomerson, Director of Jewish Voice for Peace, at the organization’s offices in Brooklyn, NY, January 23, 2019 (Kevin Hagen for +972 Magazine)

5. Why HBO’s ‘Our Boys’ is a victory for Israeli hasbara

In late August, Prime Minister Benjamin Netanyahu beseeched Israelis to boycott HBO’s ‘Our Boys,’ the American-Israeli miniseries that tells the story of the kidnapping and murder of Muhammad Abu Khdeir. But in doing so, the prime minister missed the fact that the series actually erases the occupation’s greatest iniquities, all while supporting the dominant Israeli narrative. Read Haggai Matar’s analysis here. 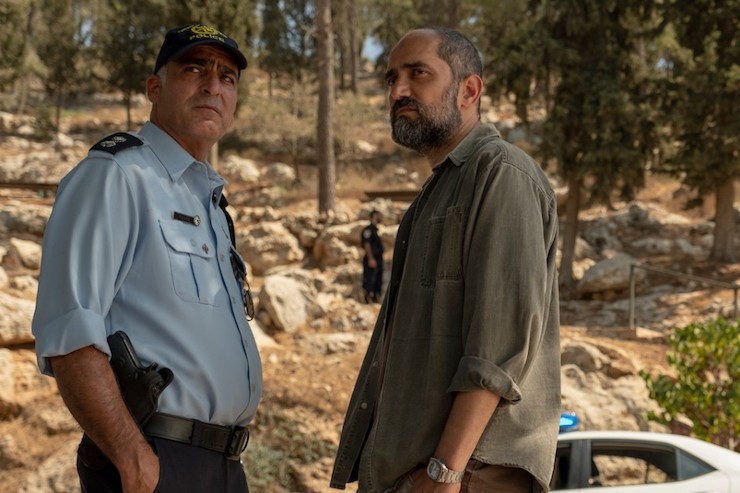 A growing movement of American Jews mobilized this year against U.S. immigration policy across the country. At the height of the protests, 44 Jews were arrested in nationwide actions in solidarity with immigrants under threat of deportation. Read Joshua Leifer’s coverage here. 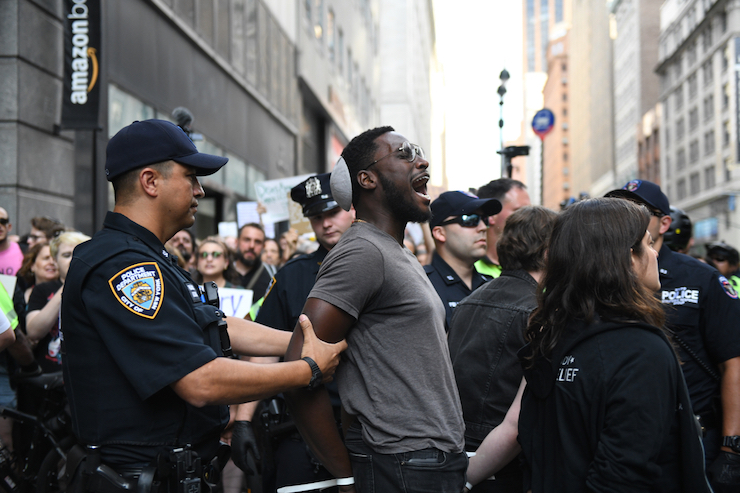 3. Israel bars hundreds of Palestinian Christians from traveling on Easter

In an unprecedented decision, Israeli authorities began denying hundreds of Palestinian Christians the right to travel to Jerusalem from across Palestine for the holiday, while barring all movement between the West Bank and Gaza. Read Henriette Chacar’s report here. 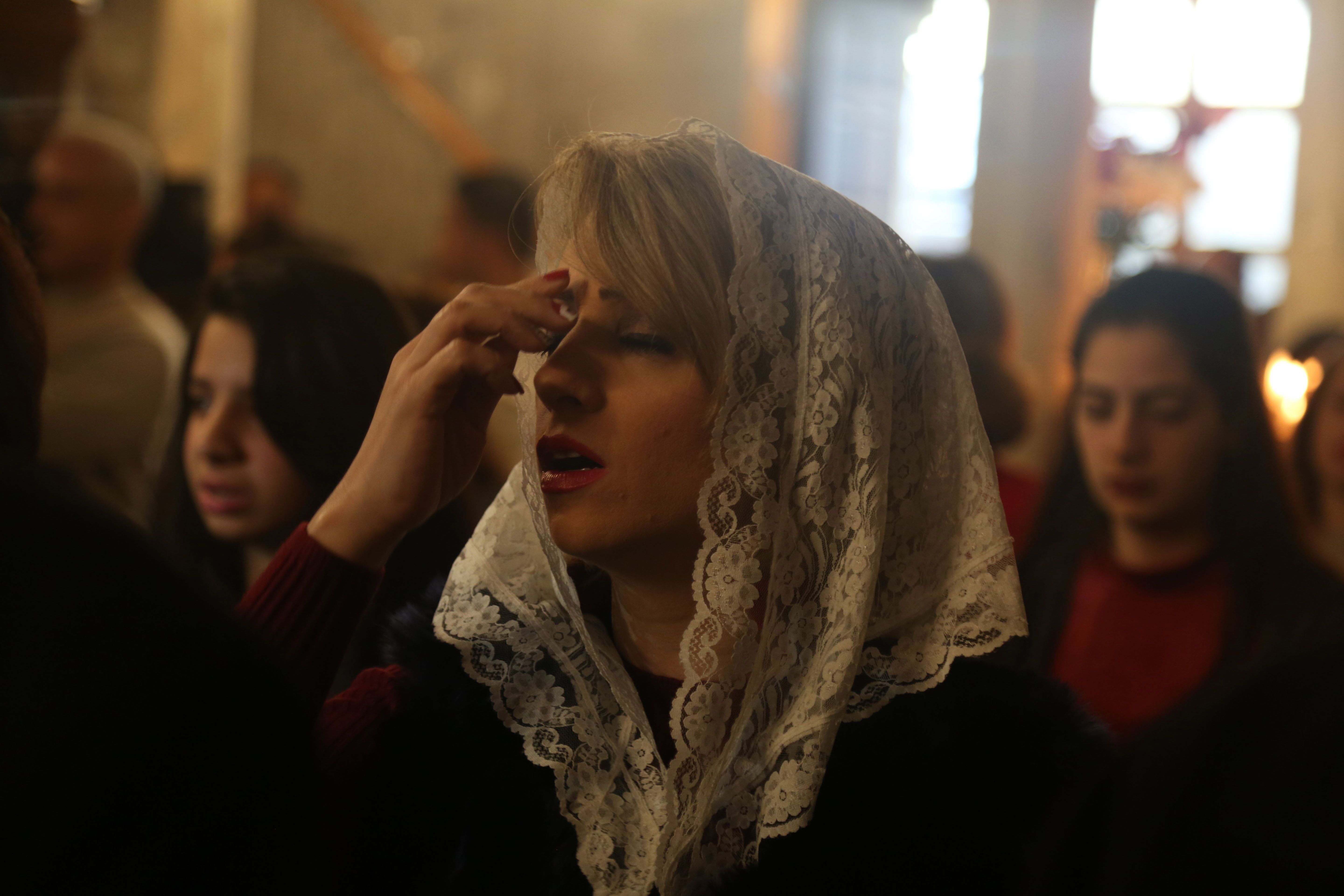 This is what occupation looks like, every single day of the year, every year.

1. Israel is trying to hide its arms sales to Duterte’s Philippines

Israel has a dark history of selling arms to some of the world’s most brutal tyrants, and its legal establishment, it seems, is content to provide cover to those sales. In September, an Israeli court imposed a total media blackout on hearings regarding the sale of weapons to Rodrigo Duterte’s regime, which has been accused of committing mass atrocities, as well as grave violations of human rights and international law. Click here to read our most-read story of the year. 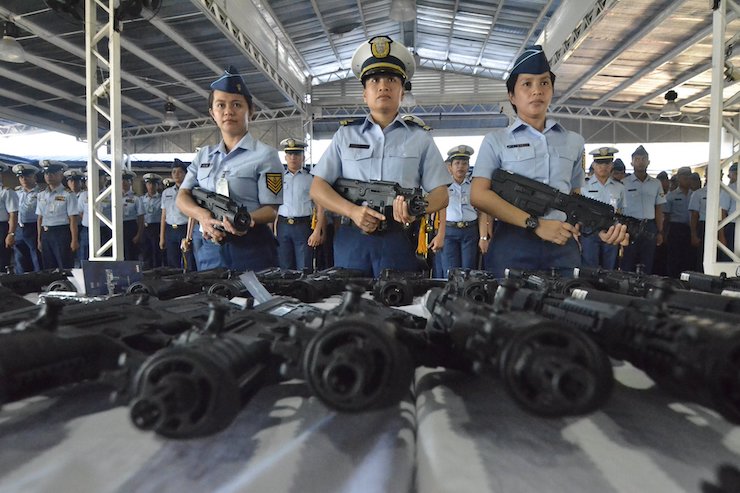 The Philippine Coast Guard presenting a shipment of 70 Israeli-made machine guns at the PCG National Headquarters Port Area on May 7, 2018. (Courtesy of Philippines Coast Guard)
Get Our Weekly Newsletter
Before you go…
A lot of work goes into creating articles like the one you just read. +972 Magazine is nonprofit journalism, owned by many of our writers, editors, and journalists. In order to safeguard that independent voice, we are proud to count you, our readers, as our most important supporters. With your support, we can keep +972 Magazine a strong, independent, and sustainable force helping push the global discourse on Israel/Palestine.
DONATE
More About Kahanism 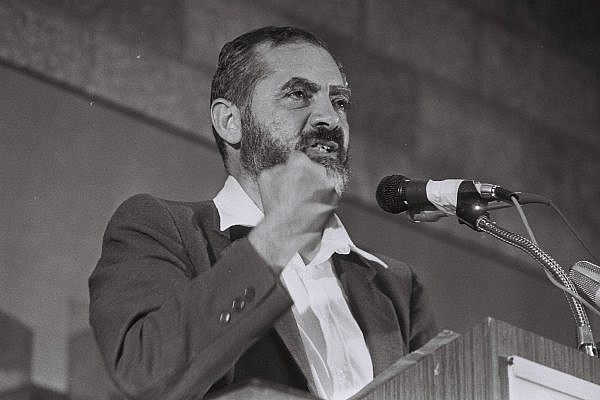 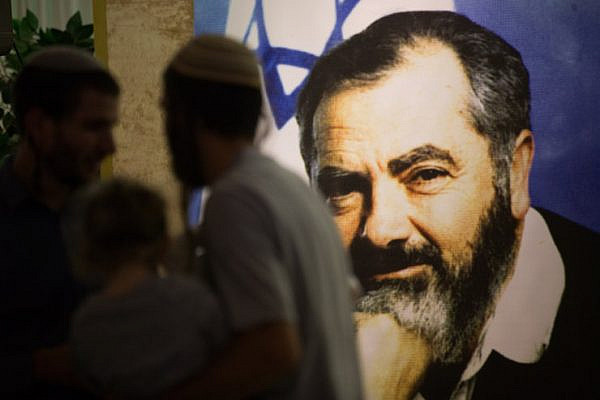