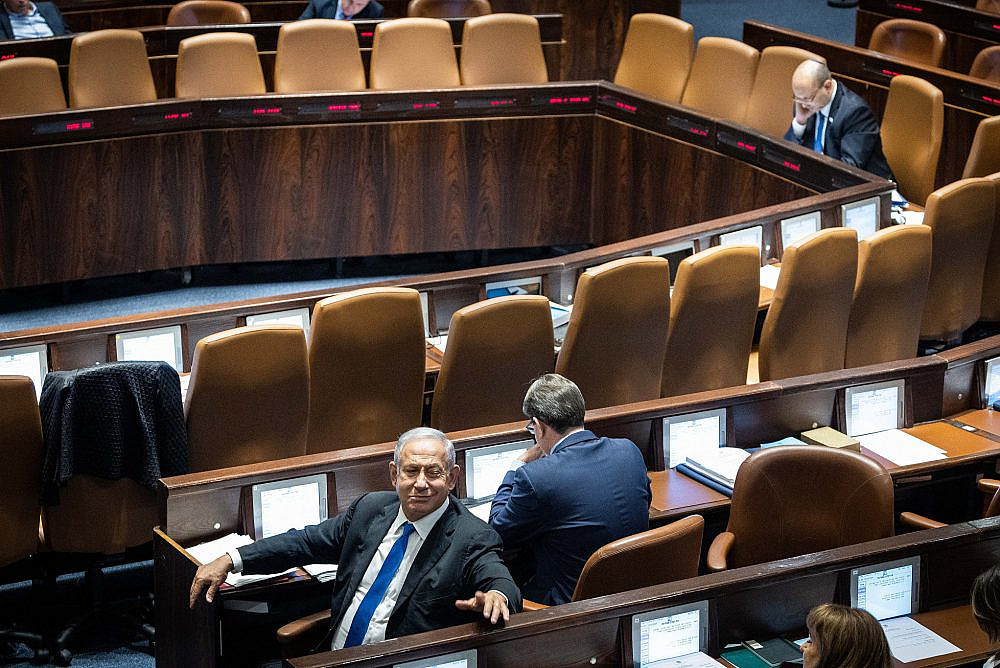 Israeli Prime Minister Naftali Bennett and head of the opposition Benjamin Netanyahu at a debate in the Knesset plenum, Jerusalem, June 13, 2022. (Yonatan Sindel/Flash90)

On Monday night, Israeli Prime Minister Naftali Bennett announced that he would be dissolving the current Knesset, thereby triggering Israel’s fifth round of elections in just over three years for sometime in the fall. In the interim, Foreign Minister Yair Lapid, who was not due to become prime minister as part of this government until 2023, will take Bennett’s place at the helm.

The Bennett-Lapid government survived exactly a year and a week before crumbling. Over the past few weeks, members of Bennett’s own Yamina party have been leaving the coalition and allying with opposition leader Benjamin Netanyahu, while other coalition members have been conditioning their support for the government on particular pieces of legislation, such as the cancellation of a planned reform in public transportation. Thus, with no guaranteed majority in the Knesset, the government was rendered effectively dysfunctional, with party leaders already having begun to prepare for the inevitable elections.

The straw that broke the coalition camel’s back goes far deeper than the standard political wrangling. At the end of the month, Israel’s “emergency regulations,” a set of temporary laws that establish legal segregation between Jewish settlers and Palestinians in the occupied West Bank, which has been renewed every five years by every government for 55 years, were set to expire. The opposition decided to vote against renewing what have been dubbed by some the “apartheid regulations,” which they fully support in principle, in order to spite the government and try to bring it down.

At a press conference on Monday evening, Bennett stated that the threat of these regulations expiring is what prompted his decision to go to elections, since a breakdown in Israel’s regime of segregation and occupation would have caused “severe security damages and legal chaos.” Now that the Knesset will be disbanded, the emergency regulations will be automatically renewed, leaving it up to the next Knesset to re-authorize them once again.

Tempting though it may be to think that protecting Israeli apartheid was the sole reason for bringing down this government, this is not the case. The vast majority of parties and members of Knesset support apartheid, and the only reason the West Bank legislation could not be extended is that there is only one decisive and omnipresent issue that guides and supersedes anything else in Israeli politics: Benjamin Netanyahu. 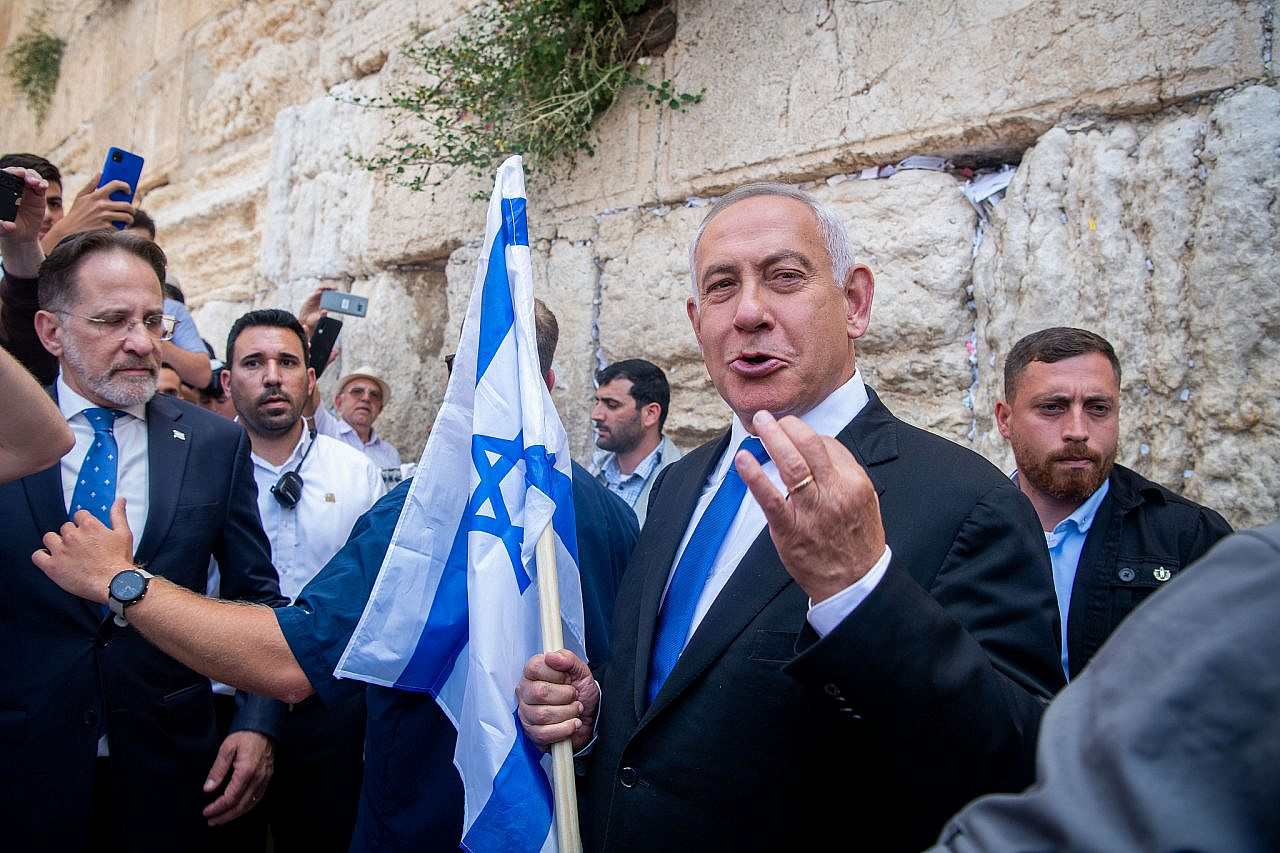 Support or opposition to the former prime minister remains the core question that has prevented the formation of a stable government for the past three years, and that absurdly led the far right to vote against apartheid, in order to topple Bennett’s government, and even more absurdly for the liberal Meretz party to vote for it, knowing that their voters believe keeping Netanyahu out of power is more important than standing up for their alleged principles on ending the occupation. This impossible constellation, coupled with the deep interest of the regime to sustain segregation by brute force in the West Bank at all costs, is what pushed Bennett to fall on his sword in order to protect the existing power structure vis-à-vis Palestinians and to defend settler privileges.

The Bennett-Lapid government was an awful one when it came to the treatment of Palestinians in the occupied territories. Beyond simply continuing with the policies of the siege on Gaza and occupation and displacement in the West Bank and East Jerusalem, the so-called “government of change” killed more Palestinians in the West Bank this past year than the Netanyahu government did the year before (though it killed fewer in Gaza), demolished just about as many homes, escalated the forced expulsion of Palestinians in Masafer Yatta, and baselessly declared six of the most important Palestinian civil society organizations as “terror groups.” And all of it was supported by the Islamist Ra’am party and the liberal Meretz and Labor parties.

Still, two slightly positive things can also be said about this failed government. First, it has inadvertently reintroduced the issue of the occupation into the public discourse. After over a decade of Netanyahu’s rule, which made Israel’s military control over millions of Palestinians nearly transparent to most Israelis, suddenly racist laws and policies have been thrust onto the center stage of Israeli politics.

The second issue is the rising power of Palestinian citizens of Israel. The precedent of a Palestinian party playing a central role in the coalition — alongside the rising visibility of Palestinian commentators and journalists in Israeli media over the past two years — is already having a deep impact on the political imagination of citizens, and the question of how to forge a lasting electoral alliance between Jewish and Palestinian political players has become a central one in Israeli electoral politics. 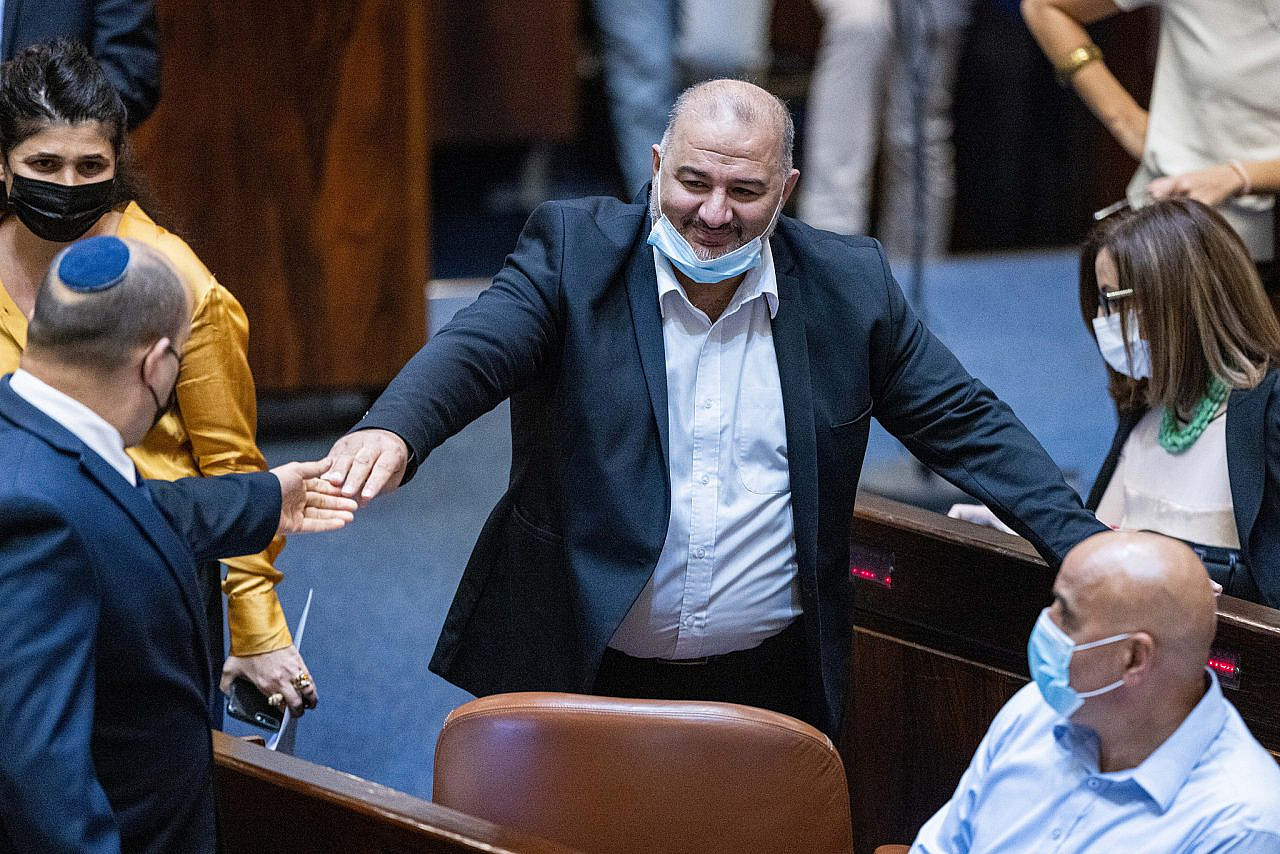 At the same time, the coalition’s attempt to “ignore” the occupation, and to force Palestinian coalition members to become compliant “Israeli Arabs” and disavow their own people, has failed resoundingly. While Ra’am did play a part in this government, with all its ills, some of its Knesset members (along with several Meretz MKs) did push back against the “Citizenship Law” (otherwise known as the “family separation law”) and the “emergency regulations” — two of the most racist pieces of legislation the government tried to ratify.

This new reality could potentially force Zionist Israelis to rethink their attitude toward Jewish supremacy in this land — at least so long as Netanyahu is around and the “anyone but Bibi” coalition wants to replace him. Because one day, when the Netanyahu Wars come to an end, the massive bloc of right-wing parties will find that there is very little stopping them from reuniting and doubling down on apartheid on both sides of the Green Line.