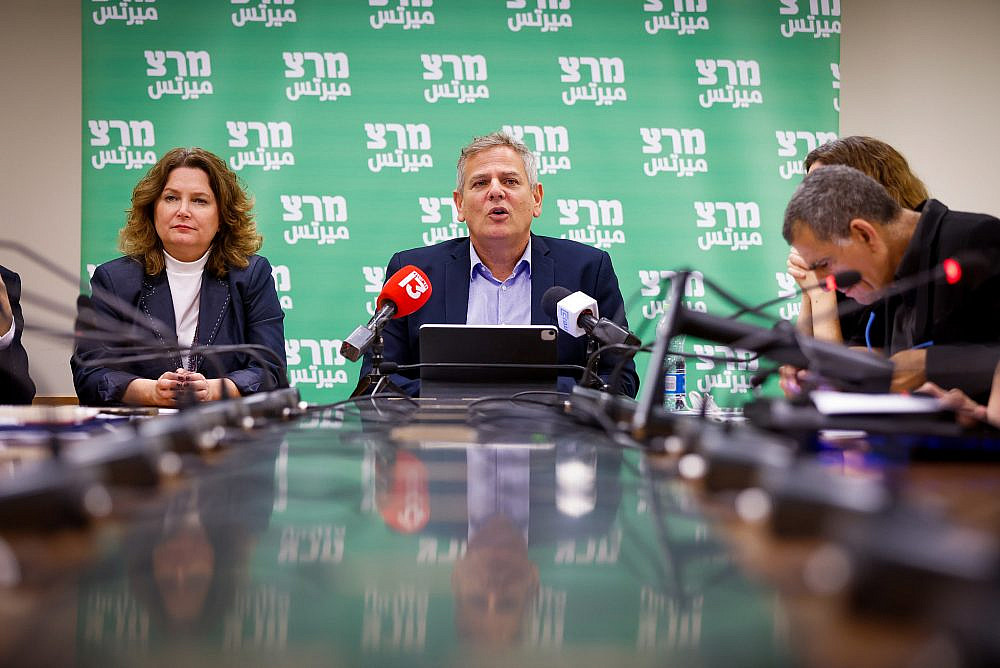 Minister of Health and head of the left wing Meretz party Nitzan Horowitz leads a Meretz faction meeting at the Knesset in Jerusalem, June 13, 2022. (Olivier Fitoussi/Flash90)

A few days before the last Israeli election, in March 2021, Meretz chairman Nitzan Horowitz was being interviewed on Channel 13’s program “Central Headquarters.” According to a significant number of pre-election polls at the time, Meretz was not going to pass the threshold of votes required to enter the Knesset. Wary of these figures, Horowitz tried to persuade his base of left-wing voters that Meretz’s presence in the parliament was essential for the fight against the occupation, which he described as perhaps the most important political issue for his party.

“The fact that there are no negotiations with the Palestinians, and that settlements are being built like there’s no tomorrow, is a red line in our eyes,” he told his viewers. Because Israel insists on maintaining the occupation, he continued, one can even understand the decision of the International Criminal Court to open an investigation into suspected war crimes committed by Israel, alongside Hamas and other Palestinian militant groups. “There was room [to influence] that decision,” Horowitz said. “I do not want Israel to have to face these situations. But Israel needs to ask itself what it is doing to prevent this.”

The Israeli right’s response to Horowitz’s statement was unequivocal. “The statement of the Meretz chairman justifying the political and antisemitic activities of the tribunal in The Hague and its persecution of IDF soldiers is a disgrace to the Israeli Knesset,” said MK Ayelet Shaked of the far-right Yamina party, who was interviewed on the program immediately after him.

Pre-election promises and feuds are never worth much. Today, Yamina is sitting in a government with Meretz (which ultimately garnered six Knesset seats), and has even partnered with Mansour Abbas of the Islamist Ra’am party — which, just a few weeks before Abbas joined the coalition, Prime Minister Naftali Bennett described as a “terror supporter.” Meanwhile, Meretz did not insist on the resumption of peace negotiations or the cessation of settlement building as a “red line” for joining the government; on the contrary, it effectively accepted that Israel has removed any talk of a Palestinian state from the table. 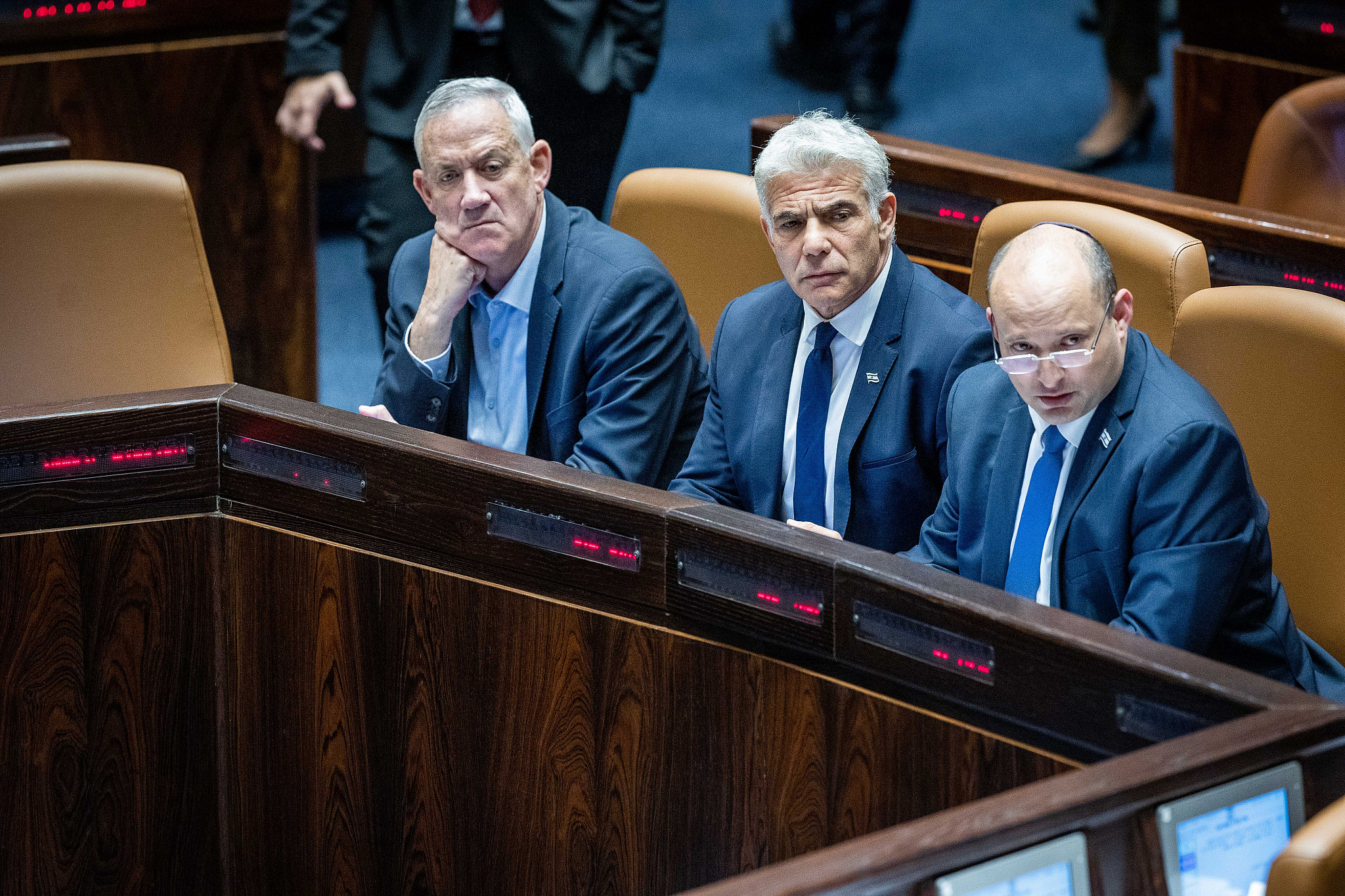 Israeli Prime Minister Naftali Bennett, Minister of Foreign Affairs Yair Lapid, and Minister of Defense Benny Gantz seen during a discussion and vote on the “settler law bill” at the Knesset in Jerusalem, June 6, 2022. (Yonatan Sindel/Flash90)

Still, what happened last week, on June 6, was unusual even within the context of Israeli politics. In a 58-52 vote, the Knesset failed to renew the emergency regulations that formally apply separate legal systems to Israeli settlers and Palestinians in the occupied West Bank. The right-wing, pro-settler members of the opposition, led by Likud, voted against the law in an attempt to fracture and undermine the government. Not wanting to break the coalition but mindful of its constituents’ views, three of Ra’am’s MKs abstained once they knew the law was going to fail regardless of their vote; only MK Mazen Ghanaim voted against the law. Meanwhile, desperate to keep the coalition intact, nearly all of Meretz’s MKs voted for the apartheid law, with Arab member Ghaida Rinawie Zoabi dissenting.

Netanyahu is the ideology

As Horowitz’s pre-election remarks showed, Meretz has long presented its opposition to Israel’s military occupation as a fundamental value. Indeed, after Yair Lapid and his Yesh Atid party (which holds the largest share of seats in the coalition) claimed the flag of secularism in Israeli politics, the occupation remained almost the only principle that distinguished Meretz from the Labor Party, Yesh Atid, and others like them.

Meretz not only broke from this principle with last week’s vote — as it did when it voted for the Citizenship Law banning family unification — but its supporters even demanded that those who ostensibly remained loyal to it, such as MK Rinawie Zoabi, resign from the Knesset, arguing that the “ideological” issue was irrelevant to keeping the coalition intact.

It is true that the game of politics always requires strange alliances and coalitions, and these alliances always require major concessions and compromises. Nonetheless, a party’s political platform is meant to represent a particular set of core values — and last week, Meretz rendered its platform meaningless.

Meretz and its supporters did not suddenly change their anti-occupation ideology, nor do they think that the emergency regulation enabling apartheid is a good thing. They are simply relegating that view to a secondary status behind a higher value: blocking Netanyahu’s return to power. 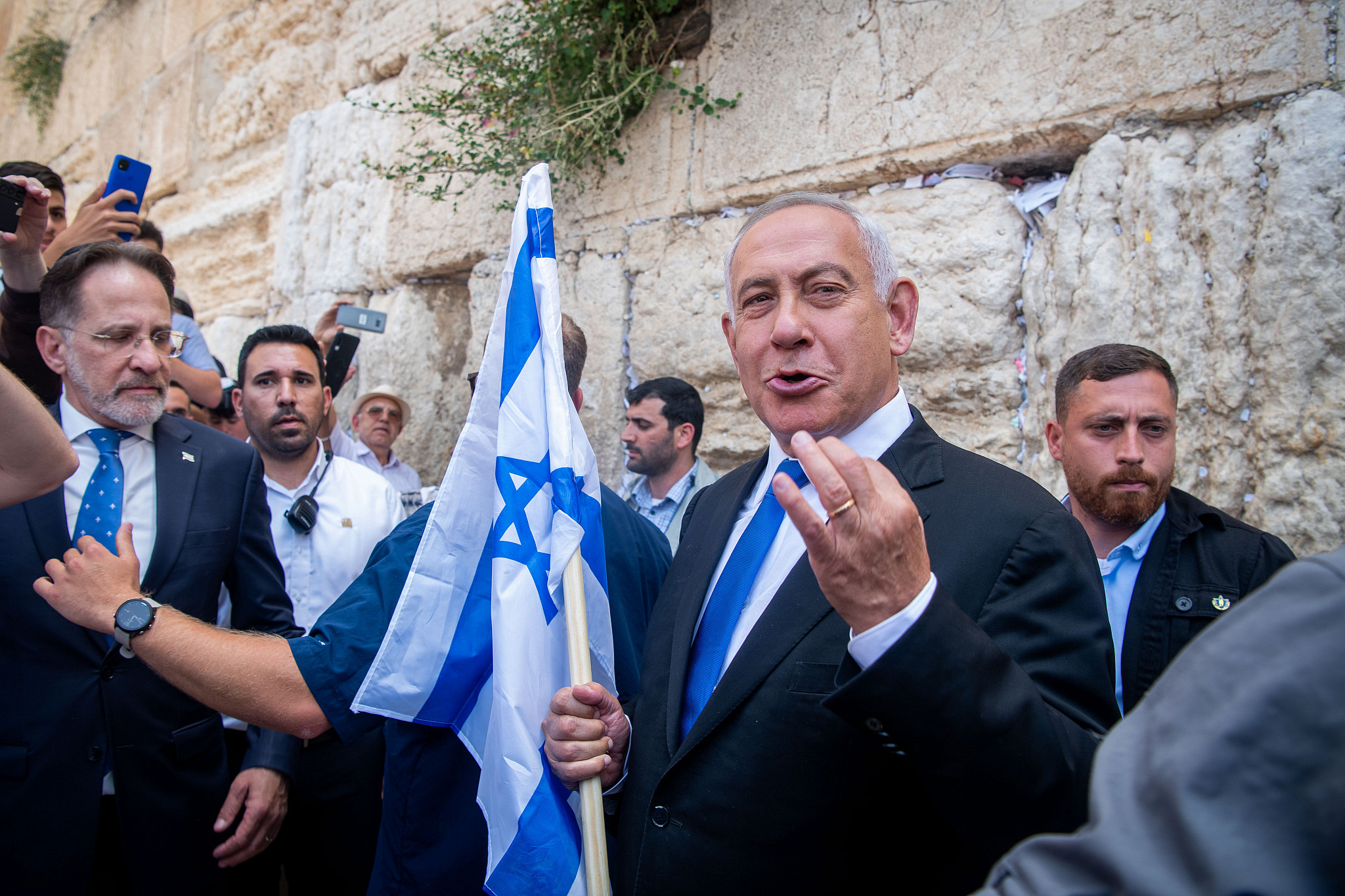 This Netanyahu-centered outlook is, in many ways, a mirror image and a direct result of how the Israeli right sees politics today. It is not that the Likud leader represents a particular political position to agree or disagree with; rather, his very presence in government is the political ideology that is being fought against.

There are many layers behind the support for the Likud leader — from religious traditionalism to economic neoliberalism to Jewish supremacism — but it is difficult to deny that Netanyahu, in body and spirit, is an ideology in and of himself. It is from this approach that Likud and Religious Zionism, of all parties, voted against extending the settler regulations; their commitment to Greater Israel and to Jewish supremacy was consumed by the commitment to Netanyahu.

Other parties have also been consumed by this one-man ideology. Just before the last election, Labor chair Merav Michaeli, in trying to explain the importance of removing Netanyahu from Balfour Street, told Local Call that “when Netanyahu leaves, we will be able to return to human politics,” suggesting that it will re-open the space to larger political debates, from the question of the welfare system to the establishment of a Palestinian state.

Last week’s vote, however, shows that Netanyahu’s ousting led to the exact opposite process. Even the narrow margins of serious ideological debate that existed in Israeli society, of which Meretz represented one aspect, have all but disappeared. What remains instead is a power struggle over whether “we” or “they” should rule — “they” being defined solely by the Netanyahu camp.

Within all this madness, the only party that has maintained a reasonable degree of ideological backbone is the Joint List. The List not only opposed the establishment of any government that would be headed by Netanyahu, but did so while voting against the ban on Palestinian family reunification last year and against the apartheid regulation this month. 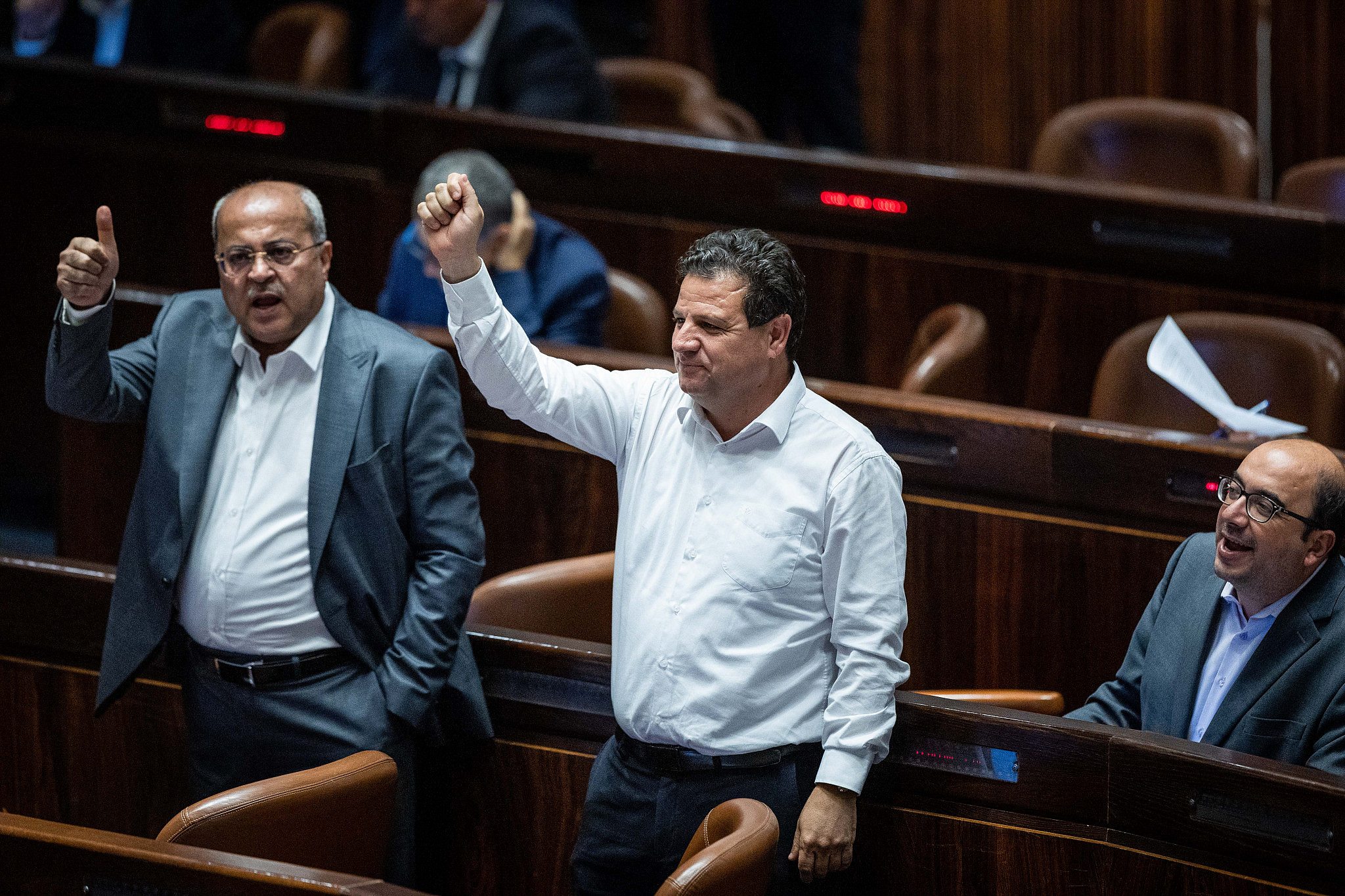 Joint List MKs during a discussion and vote on the “settler law bill” at the Knesset in Jerusalem, June 6, 2022. (Yonatan Sindel/Flash90)

The Joint List’s chairman, Ayman Odeh, was also consistent in his support of the “Netanyahu blocker” bill, a proposed law which would ban anyone who has been criminally indicted from serving as prime minister. Yet the coalition parties, which supposedly want nothing more than to block Netanyahu’s return, didn’t take the initiative with the bill; some of them, it seems, even continue to glance over in Netanyahu’s direction.

Moreover, the Joint List has succeeded in a task that has often seemed too difficult throughout the year of the Bennett-Lapid government. Judging from a childish public letter penned by Bennett on the eve of the holiday of Shavuot, the prime minister does not see the presence of an Arab party in his coalition as a step toward fair representation at the helm of government, nor even as a step toward an Israeli society that treats both Jews and Arabs equally.

Rather, according to Bennett, the only advantage of having Mansour Abbas in the coalition is that he recognized Israel as a Jewish state. As such, he wrote, “Israel has a great national interest that Abbas’ path — a path of peace and cooperation, and not that of Ayman Odeh, a path of extremism and nationalism — will succeed.” In other words, Bennett believed what Abbas himself told him: that Arab leaders in Israel could break away from their Palestinianness and become “Israeli Arabs,” whose collective aspirations amount only to additional budgets and cracking down on crime, and who has no claim at the national level.

Yamina MK Nir Orbach adopted this thinking for a while, too, which explains his aggressive response to Ra’am MK Mazen Ghanaim’s decision to defy the coalition by voting against the apartheid regulation last week. “The experiment with you [Ra’am] has failed,” yelled Orbach on the Knesset floor, referring to the attempt to convert the Palestinian Arab into the Israeli Arab. But it was not only Orbach and Bennett, longtime deniers of Palestinian nationalism, who were partners in this experiment; Yesh Atid, Labor, and Meretz also tried to test whether, in exchange for greater budgets, Arab politics in Israel would give up its national aspirations. 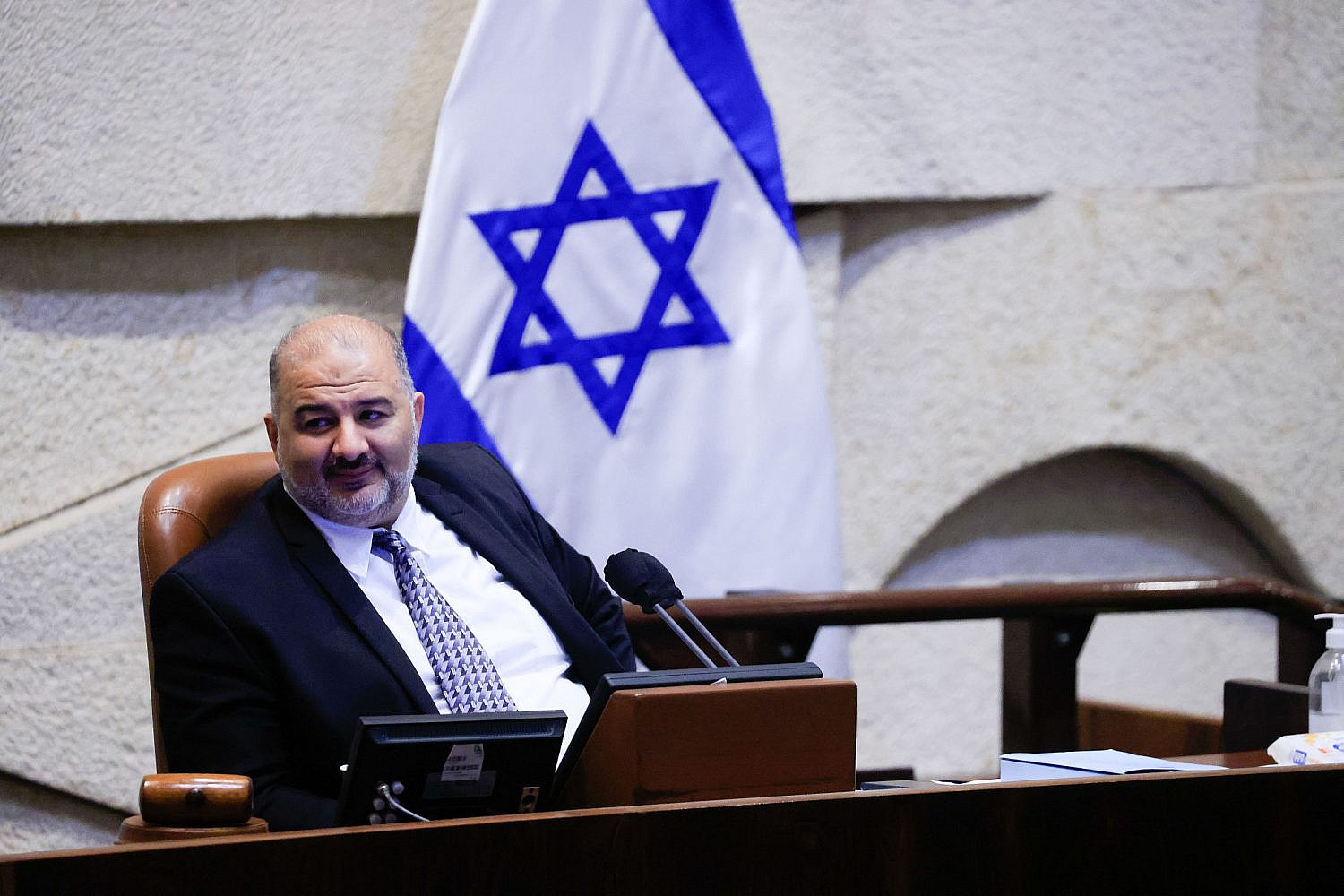 MK Mansour Abbas seen during a vote on the state budget at the assembly hall of the Knesset, September 2, 2021. (Olivier Fitoussi/Flash90)

In the face of a government that could have backed this experiment with tens of billions of shekels and government benefits; in the face of former allies on the Zionist center-left who chose the Islamist Abbas over the Joint List; and in the face of a significant current in Arab society which wants immediate results to rectify the discrimination they have faced for decades — the Joint List maintained its fundamental principles, even as its former Jewish allies accused it of “radicalizing.”

At the end of the day, this stance — alongside the continuing injustices of Israeli apartheid, violent events such as the killing of journalist Shireen Abu Akleh, and the collective experiences and activism of the wider Palestinian citizenry — has succeeded in bringing about the failure of the political being known as the “Arab Israeli,” and prevented the erasure of the political being in Israel that is “the Arab Palestinian.” 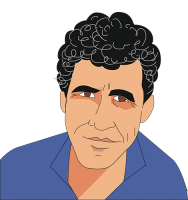