Human rights groups and foreign diplomats were kept out of the closed-door Palestinian court hearing. Members of U.S Congress demand that Abbas release Amro, an EU-declared human rights defender, who was arrested for criticizing the PA on social media. 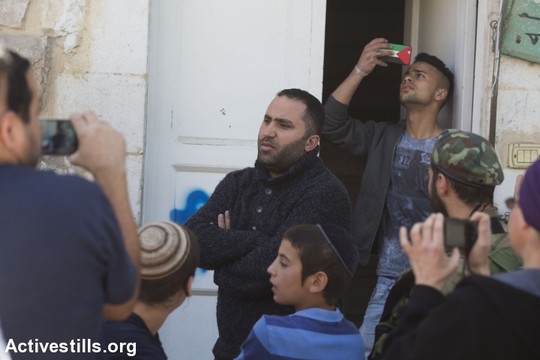 The Palestinian District Court in Hebron on Thursday ordered that well-known human rights activist Issa Amro remain in jail for an additional four days. Amro, co-founder of Hebron-based anti-occupation group Youth Against Settlements, was arrested on Monday by the Palestinian Preventative Security Service, allegedly for criticizing the Palestinian government. He is being accused of sedition and incitement against the PA.

Amro began a hunger strike on Tuesday, and has said that he is refusing medical care.

Prior to the hearing in Hebron court on Thursday, the Palestinian general prosecutor held a meeting with Amro’s attorney, and representatives of Palestinian human rights organizations Al Haq and Addameer. During the meeting, Amro said that since his arrest he has been held in a shower instead of a normal prison cell, and that guards have threatened to beat and even kill him.

In the court hearing, the Palestinian prosecution asked the court to extend Amro’s remand, and added a new accusation of “cyber crimes.” Palestinian Authority President Mahmoud Abbas recently signed an “Electronic Crimes” decree, effectively curtailing what little free speech existed for Palestinians under Palestinian law, and which was believed to target online dissent against the PA, particularly on social media. The new law was roundly criticized by rights groups in Palestine and around the world. Israel also regularly arrests Palestinians for posts on social media.

Thursday’s hearing was held behind closed doors. Amro’s family members, representatives of Palestinian human rights groups, and foreign diplomats who came to support the EU-declared human rights defender, were not allowed into the courtroom.

It appears that the Preventative Security Service and its cyber division need more time to review the host of interviews Amro has given over the years and his various publications on social media. His mobile phone and personal computer have been confiscated and it would appear a thorough search is being conducted.

Thursday afternoon, after Amro was returned to custody, he called one of his friends in Youth Against Settlements and said he had been told that if a motion for his release were to be filed, the PSS would not oppose it. His lawyer rushed to file the motion with the court, but as of the time of publication the authorities had not responded.

Prior to his arrest on Monday, Amro gave the following statement to a colleague at Youth Against Settlements:

Amnesty International put out a statement Monday calling for Amro’s immediate release, saying it was “outrageous that a prominent human rights defender has been arrested simply for voicing his opinion online.”

Michael Schaeffer Omer-Man contributed to this report. A version of this article also appears on Local Call in Hebrew. Read it here.