The Israeli public’s indifference to the effects of war on Palestinian children does not result in passivity — it is an integral component of the violence Gaza’s population faces. 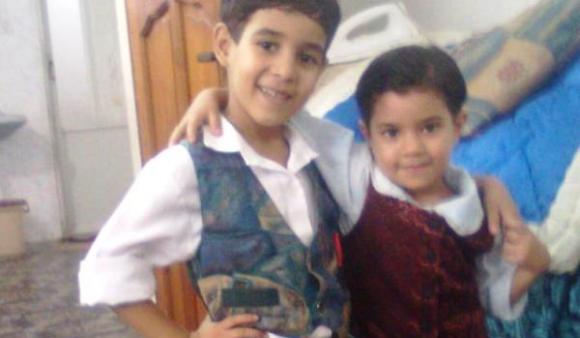 Ali Al-Awour, 10, pictured on the left with his youngest sister, died on 14 June 2014 of wounds he sustained from an Israeli airstrike. (photo: Defense for Children International-Palestine)

Ali al-Awour (pictured above on the left) was a 10-year-old boy from Gaza who loved to play soccer. On June 11, 2014, Ali was riding on the back of his uncle’s motorcycle when an Israeli missile targeting his uncle, a suspected member of a militant group, struck the vehicle. He found himself on a hospital bed in intensive care for three days before dying of his wounds.

Ali was the first child from Gaza to be killed during last summer’s hostilities, just several weeks before Operation Protective Edge was officially launched. But as the weeks went by, his name was quickly forgotten in the flood of dead children that followed him:

“I threw myself on the rubble and started to remove it away and call for my family members. They were all gone, 19 of them, nine children, killed and I do not know why. They left me with so much pain.” — Hameeda, aunt of nine children killed by the bombing of the Dheer family home (testimony collected by Al Mezan and Save the Children)

“Bader Qdeih, aged 6, was seen pleading for help from people fleeing Khuza’a while holding his intestines, which were coming out of his abdomen, ‘I don’t want to die. Don’t leave me.’ He died soon afterwards, after his medical evacuation was delayed.” — UN Commission of Inquiry’s Report on the 2014 Gaza Conflict A photo of Abdallah Abdel Hadi Al Majdalawi amid the ruins of his home, Gaza Strip, March 19, 2015. Abdallah (13) was killed alongside his brother Abdelrazek (19) and his cousins Rawan (9) and Mahmoud (8), by an Israeli attack which took place without any warning on August 3, 2014. (photo: Activestills.org)

People have an odd tendency to forget that the wounds of war do not end after the guns have stopped blazing. One year may have passed since Operation Protective Edge, but there has been no rest to the suffering of the hundreds of thousands of Palestinian children living in Gaza. Families and communities remain torn apart by the loss of the 551 children who were killed, while also struggling to restore the lives of the 1,500 children who were made orphans. Approximately 100,000 people, more than half of them children, still have no homes to return to due to the total destruction or severe damage of their buildings — none of which have been rebuilt because of the severe lack of construction materials allowed into the territory.

Nearly 3,500 children are also recovering from physical injuries incurred during the war, with tens of thousands more suffering from psychological trauma; a statistic that is difficult to write when you realize what that entails. A girl whose arms were blown off by a nearby airstrike can never hug her parents or pick up her toys to play. A boy whose legs were pierced by shrapnel may never walk or kick a ball with his friends. A girl hearing the sound of drones above her head fears she might be killed on her way to school. A boy who watched his family crushed by a collapsing building cannot sleep as he stares at his bedroom ceiling in horror every night.

These stories from Gaza have been almost completely absent from the Israeli public’s discussions of the military operation. Far from questioning the scale of last year’s deaths and destruction, many simply remark that Palestinian child casualties were “regretful” but unavoidable during times of war. Others turn to victim-blaming to ignore or justify their deaths, claiming that Palestinian children are raised in a “culture of hatred” or that they were used as “human shields.” Few of those people consider those remarks to be as generalizing and insidious as saying that Israeli children are tolerable casualties of war, simply because their relatives are combatants living among civilians, or because the children themselves would have grown up to become soldiers of the occupation. 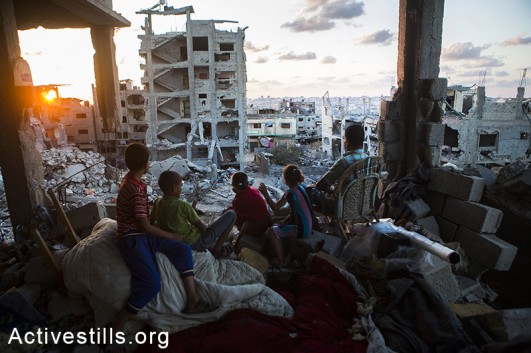 A Palestinian family sits in their destroyed home in a quarter in At-Tuffah district of Gaza city, which was heavily attacked during last Israeli offensive, Gaza city, September 21, 2014. (Photo: Anne Paq/Activestills.org)

The absence of these stories is facilitated in part by the Israeli authorities’ refusal to identify and punish those responsible for the killing of Palestinian children, thereby marginalizing these events from the Israeli public’s attention and maintaining their view of the IDF as the “most moral army in the world.” The most prominent example of this is the case of the four Bakr boys who were killed by an IAF missile while playing soccer on the beach. The Israeli Military Advocate General (MAG) simply dismissed their deaths as a “tragic incident.” Adalah and Al Mezan, two human rights organizations that filed a complaint on the case, rejected the MAG’s excuses for closing its investigation, saying: “Can it be that the Israeli army, with all of its technologically advanced weapons, cannot distinguish between armed combatants and children playing at the seaside?… [this case has shown] that the Israeli army has no willingness to uncover the truth of the incident.”

The demand for justice in the Bakr case, like in every other case, is not just about holding the military to account for war crimes and deterring future crimes. It is about recognizing the pain felt by other children affected by the incident in order to confront the wrongs that were caused. For example, Montaser, aged 11, has been unable to recover from the loss of his brothers and cousins who were killed that day. “I have hated the sea and the beach since then,” he told DCI-P. “I do not go to school any longer because I keep remembering them. My father takes me to a psychologist because I get these cramps. I am scared what happened to them may happen to me. I am scared I may die the way they did.” Just as heartbreakingly, Montaser’s younger brother Mu’tasem, aged 10, is haunted by the guilt that he was the one who proposed to his brothers and cousins to play on the beach that day. “I wish I never suggested we go there…we were just playing football and nothing was wrong on the beach. I don’t know what we did wrong.” 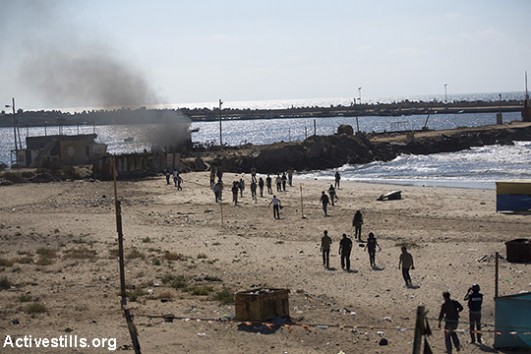 Smoke rises from Gaza shore after missiles launched by the Israeli navy. Four children from the Bakr family were killed while they were playing on the beach. The names of those killed: Ahed Atef Bakr, 10; Zakaria Ahed Bakr, 10; Mohamed Ramez Bakr, 11 and Ismael Mohamed Bakr, 9. (Anne Paq/Activestills.org)

These stories are reflections of the daily realities faced by the children of Gaza. But despite the mountains of information that shed light on these realities, the Israeli public continues to be completely impervious to the consequences of the war waged in its name. This indifference does not result in passivity; on the contrary, it is an active and integral component to the structural violence that dominates Gaza’s population, and which turns Gaza’s children into permanent victims long after the wars are over. The fact that Palestinian leaders and militias also play a part in the suffering of Palestinian children is not lost on most families in Gaza; but it is still nowhere near the devastation caused by Israel’s military apparatus, nor does it justify Israelis’ denial of their state’s responsibility for Gaza’s inescapable turmoil.

With three wars in six years, an eight-year blockade, and 48 years of military occupation, Israelis will need to understand that their denial and avoidance of the suffering of “the other side” does not prevent future conflict — it assures it. Some may cite Assata Shakur’s claim that “Nobody in the world, nobody in history, has ever gotten their freedom by appealing to the moral sense of the people who were oppressing them.” But in a fight for human rights among divided people living on the same land, it is one of our most crucial and necessary weapons.

So how do we overcome this indifference? By recognizing, for starters, that this article would have been received very differently if it began with this child’s story instead of Ali al-Awour’s: Daniel Tragerman, 4, from Kibbutz Nahal Oz, was killed by a mortar shell during a barrage of rocket fire from Gaza on August 22, 2014. He was the first and only child out of Israel’s six civilian casualties during Operation Protective Edge.

Daniel Tragerman (pictured above) was a four-year-old boy from Kibbutz Nahal Oz in the south of Israel. As shown by his photo wearing Lionel Messi’s Argentina jersey, Daniel loved to play soccer — just like Ali and the Bakr boys. On August 22, 2014 Daniel was killed by shrapnel from a mortar shell during a barrage of rocket fire from the Gaza Strip. He was the first and only child out of Israel’s six civilian casualties. “From the moment of the siren to the explosion, only three seconds passed,” said his mother Gila last year. “We didn’t have time to get the children and go into the protected room.” Hundreds of people including state officials attended his funeral, and his photo went viral across Israeli social media.

For Israelis to begin to understand what happened to children in Gaza, take Daniel Tragerman. Now multiply him by 551.