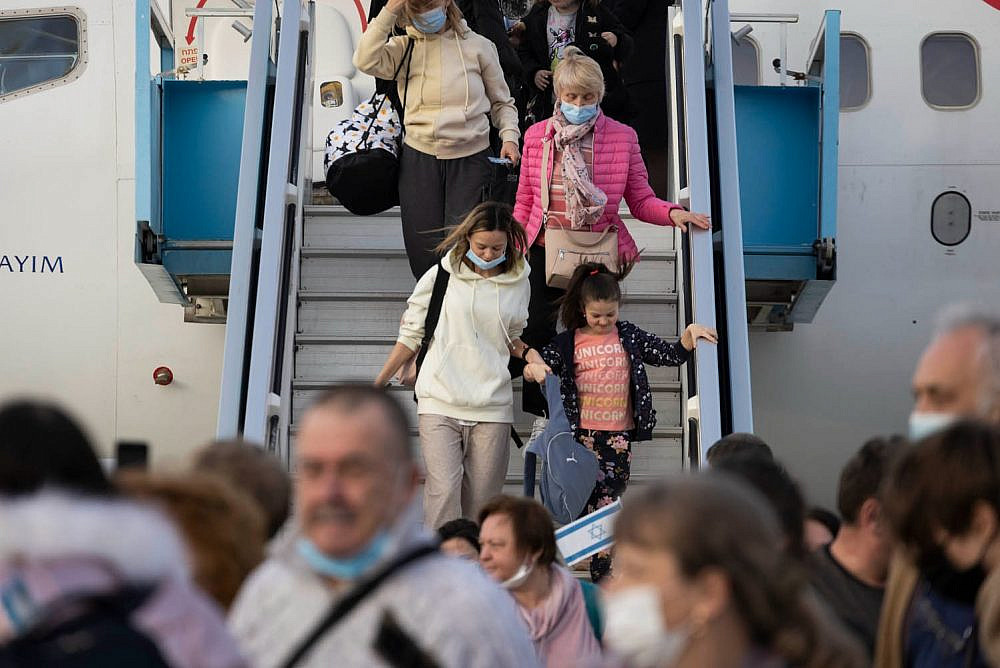 For the Jewish refugees who have been arriving in Israel’s Ben Gurion Airport over the past several weeks, fleeing Putin’s war on Ukraine, any home not under Russian bombardment might serve as a safe haven. But given Israel’s plans to dispatch them to Jewish settlements in the occupied West Bank and the Naqab/Negev — where Palestinians have been, or are being, forced out of their homes — those same refugees are no longer inhabiting a singular role as victims.

This tension perfectly encapsulates a far bigger story: that of Zionism writ large since the early 20th century, and how the noble aim of saving lives and resisting oppression ends up being used to justify the oppression of another people.

It is a story of how the dispossessed and powerless become powerful agents of dispossession themselves; of how Europeans see the backs of the Jewish refugees running for their lives, but we, Palestinians, see the faces of the soldiers and settlers taking over our land and our homes.

The neat clarity of watching a refugee being transformed immediately — within a few hours or days — into a settler, deployed as a shield in Israel’s demographic-geographic frontier war against the mere presence of the native Palestinians between the river and the sea, illustrates the more complicated picture.

The war over Jewish liberation

In the late 19th and early 20th centuries, one would need a heart of stone not to identify with the suffering of the Jews in Europe. One need not have been a Zionist to express sympathy with the Jews fleeing pogroms in the Pale of Settlement, for example, or with Captain Alfred Dreyfus, whose false conviction for treason by the French state on account of his being Jewish was one of the triggers for Theodor Herzl to convene the First Zionist Congress in Basel in 1897. Emile Zola’s famous “J’accuse!” letter in defense of Dreyfus did not emanate from Zionist fervor, while Bernard Lazar, a proud Jew who defended Dreyfus, did not adopt Herzl’s solution to “the Jewish question.”

Many have argued that Zionism did not actually reject the logic of European antisemites, such as those who persecuted Dreyfus, but rather adopted their central logic: that nation-states should be ethnically pure and belong to one ethno-national group, much like private houses belong to a single owner. Zionism accepted the exclusivist logic of ethno-nationalism, believing that the time had come for Jews to have a private home of their own — and in so doing, became the victimizer rather than the victimized. 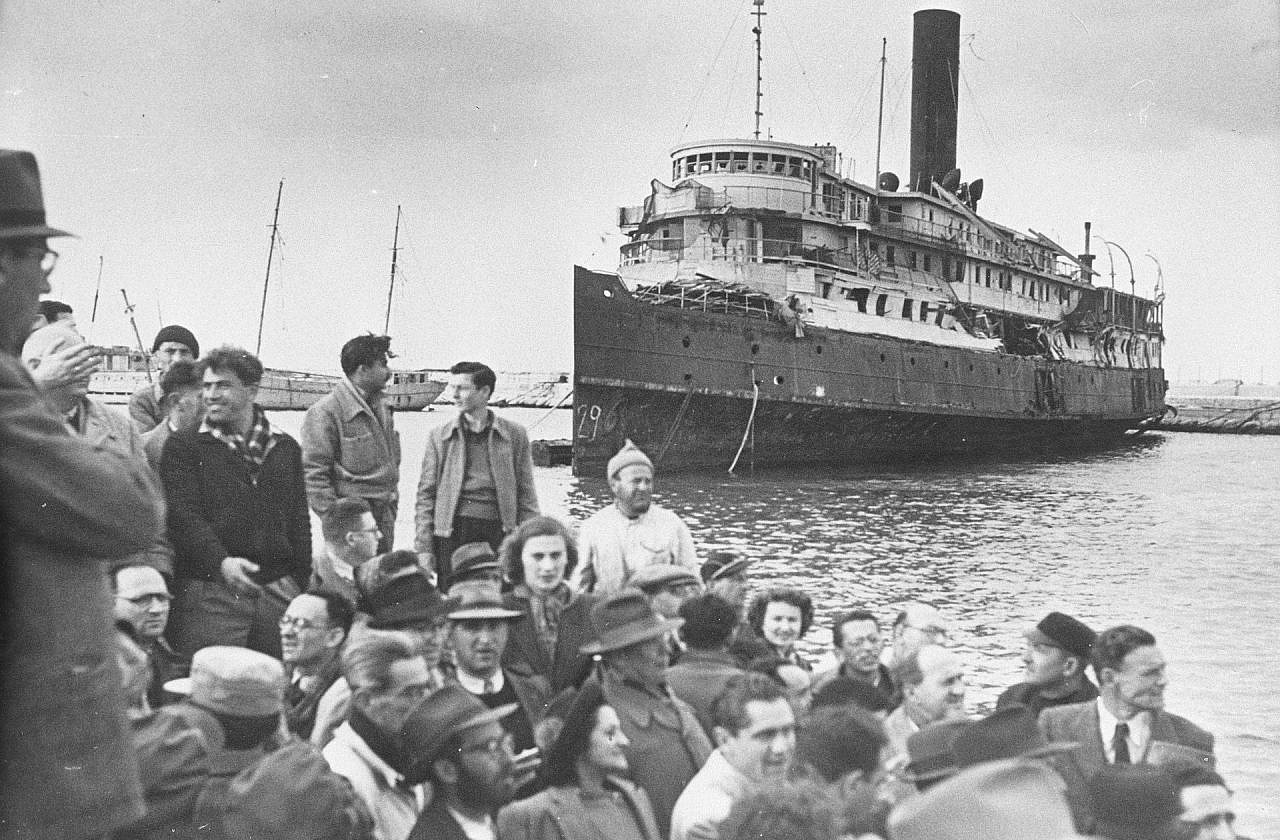 If you pay heed to the way Israeli propaganda deals with antisemitism and victimhood, you would be forgiven for thinking we are still living in the 1890s. But, contrary to this distortion of reality, victimhood is not something that is passed on in the DNA of ethnic groups. Rather, it is a contingent historical condition, subject to the power relations within a given political, social, and economic constellation and period. The power relations at play in Israel-Palestine today are not the same as those in 1890s Europe; the settlers of Hebron are no longer the helpless, victimized heirs of Alfred Dreyfus.

It was perfectly possible to defend Dreyfus against his racist scapegoating by the French state without subscribing to a nationalist discourse, and to instead argue against antisemitism within the bounds of a liberal framework of civil and political rights. But one may counter that these individual rights are not sufficient, given that many Jews in Europe felt they constituted a collectivity and were therefore not willing to hide or surrender their Jewish identity in order to be granted equal citizenship. As Hannah Arendt once said: “When you are attacked as a Jew, you have to defend yourself as a Jew.”

Yet that defense still does not automatically equate to Zionism. Visions of Jewish collective rights have never been homogeneous. Some have sought to achieve those rights inside Europe. Others have sought instead to leave Europe as a geography but join its history and conceptual scheme from elsewhere, by adopting the image of a modern nation-state as it had been conceived in Europe while implementing its political project beyond its borders; or, put plainly: to become European outside of Europe. Among the latter group, some looked to Argentina or Uganda, while others insisted on settling in Palestine — either in pursuit of cultural flourishing under the Ottoman Empire, or in the form of sovereign Jewish political nationalism. 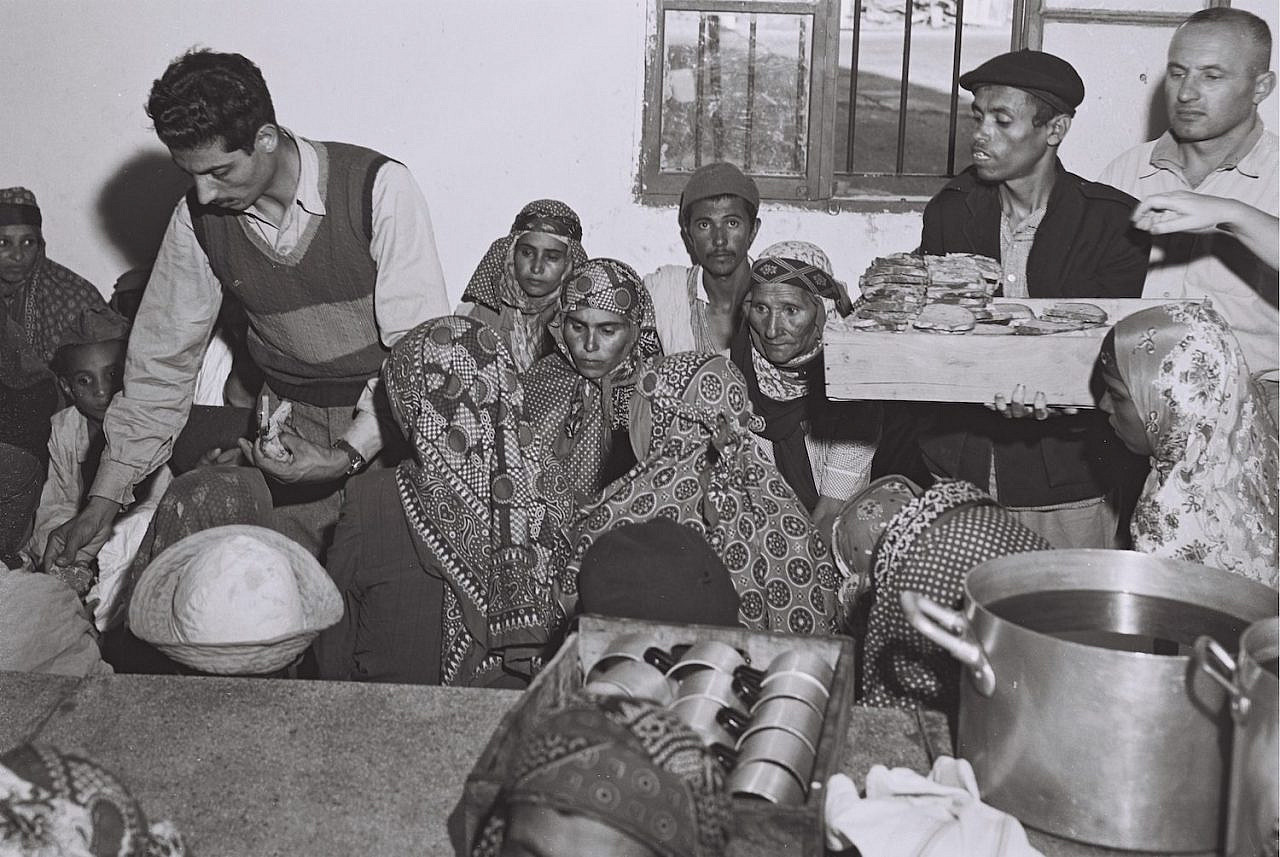 Yemenite immigrants eat their first meal after being airlifted from Yemen and landing in Israel, October 23, 1949. (Teddy Brauner/GPO)

But even those who saw creating a sovereign Jewish national collectivity in Palestine as the solution to European antisemitism were not unanimous in their support for a national-ethnic state for the Jews; some were ready to accept a binational state for Jews and Arabs alike within one territorial unit. Even today, when an exclusivist Jewish nation-state has existed for over 70 years, there remains a (mostly theoretical) debate between those who are ready to limit this state’s sovereignty to parts of Palestine and those who insist on establishing Jewish sovereignty across all of Palestine and thus settling every inch of it — even in the middle of Hebron.

The internal political story of Zionism is thus, in many ways, the story of those on the so-called left of the Zionist spectrum losing the war to the “right”: the cultural Zionists, who believed in a spiritual Jewish center (rather than a state) in Palestine lost to the political Zionists, who insisted on sovereignty and statehood. The bi-nationalists, who believed in shared political sovereignty with the Palestinians, lost to those who insisted on a purely Jewish state. And those seeking to limit Israel’s borders, which today we refer to as the “Zionist left,” continue to lose to the territorial maximalists.

Whatever the reasons for Zionism going down these paths, the real issue today is that Israel has colonized almost all of historic Palestine, and those who have settled in Hebron want us to believe that they are still speaking in the name of Dreyfus so as to claim the moral high ground in their relations with the Palestinians. They want to take symbolic capital from another era and another continent, when Jews were a helpless, victimized minority, and to deploy it here and now — when Israel is an occupying force, a regional military superpower, and an economic empire.

The same holds for the recent refugees from Ukraine. Their tragic plight is being manipulated by the State of Israel, which, in providing them a safe refuge, is simultaneously deploying them in the struggle over the land. It is as if the state is saying: “We are ready to save you as long as we can use you in our demographic war.” The body of the Jewish refugee thus becomes a weapon against the Palestinians. 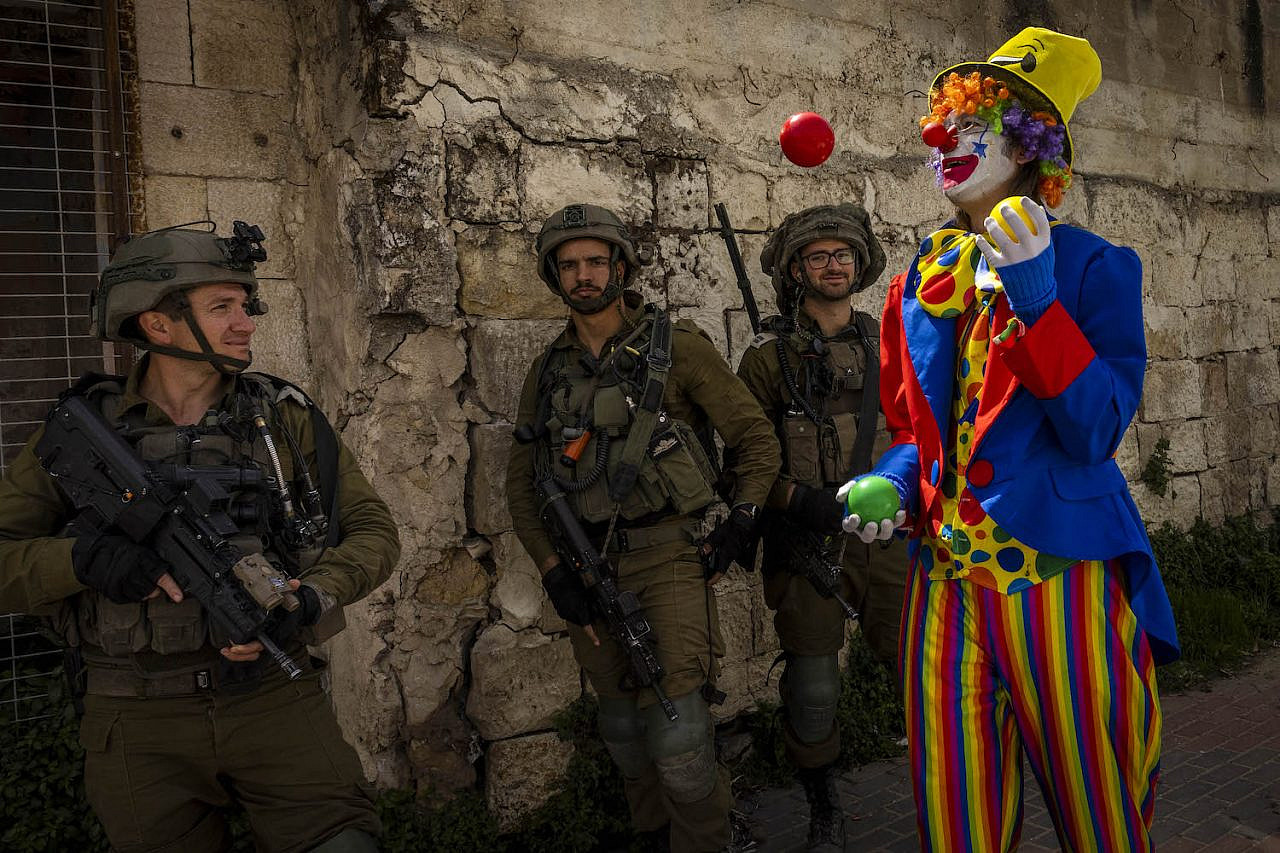 A Jewish settler dressed as a clown takes part in the annual Purim parade in the West Bank city of Hebron, March 17, 2022. (Olivier Fitoussi/Flash90)

The fact that Jews were Europe’s victims — second-class citizens who were violently persecuted, faced genocide, and made into refugees — need not blind us to the fact that the State of Israel, in justifying itself as a refuge for those victims, has turned Palestinians into a nation of refugees and stateless people while occupying, besieging, and discriminating against the Palestinians who remain in our homeland. Equally, the fact of Zionist dispossession and colonization of Palestine should not overshadow the fact the Jews suffered for centuries under European powers and required an urgent solution to their victimization.

Only once both of these perspectives are fully acknowledged will we be able to start a meaningful conversation between both people — one that reconciles their past and their future.

Dr. Raef Zreik is a jurist and researcher, expert in political philosophy and philosophy of law, senior lecturer in Property Law and Jurisprudence at ONO Academic College, associate academic director at the Minerva Center for Humanities at Tel Aviv University and senior research associate at the Van Leer Jerusalem Institute.