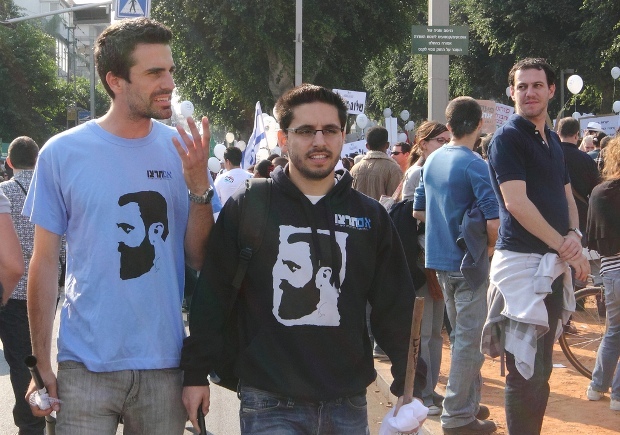 Right wing group Im Tirzu published a new propaganda document (Hebrew PDF) earlier this week, which refreshingly does not claim to be anything else. It is called “Nakba Harta,” literally “Nakba Bullshit,” and is written jointly by IT’s CEO, the convicted criminal Erez Tadmor, and Ar’el Segal, a noted right-wing writer; the document purports to be an expose of the truth about the destruction of Palestine, and is full of the usual Im Tirzu mixture of sleight of hand, fiction, and deceit.

It’s something of an annoyance, seeing that Israeli Hasbara did not evolve since the 1950s: IT’s booklet contains every mildewed point ever made by Zionist and Israeli propagandists. A major part of the pamphlet looks as if it was lifted directly from Joan Peters’ From Time Immemorial, which was debunked in the 1980s and which did not deter the famous torture and Israeli advocate (the two often go hand in hand, unfortunately) Alan Dershovitz from presenting it, repackaged and reheated, to American readers.

Segal and Tadmor throw in any Muslim or Arab massacre of Jews they can find throughout history, and as usual use misdirection and white lies. Here are several instances: They note the murder of 500 Libyan Jews during the Holocaust, elegantly ignoring the fact they were murdered not by the Libyans, but by the invading Germans (p. 55); they mention (p. 54) “anti-Jewish riots” in late 19th century Algeria, while conveniently avoiding the fact they were carried out by the French (Algeria was a French colony at the time), and that they were influenced by the Dreyfus trial; They speak of Apion’s blood-libel in Alexandria (p. 56), and astonishingly manage to refrain from noting it took place in the first century AD, i.e. about 600 years before the rise of Islam. The Ottoman Empire, the most important Muslim regime in history, does not fit the narrative, and is therefore not mentioned.

I’ll address three issues with the pamphlet. The first is rather minor: Segal and Tadmor deal, in their last chapter, with the pro-Nazi activities of the Grand Mufti, Haj Amin El Husseini, trying to use him as a way to smear the entire Palestinian national movement as pro-Nazi. This is rather daring, coming from Im Tirzu: The movement is proud of the volkist Avraham “Yair” Stern, to the point of selling t-shirts with his image. Stern’s terrorist organization, known as the Stern Gang, made at least two attempts to reach an alliance with the Nazis, based, among other issues, on their commonly shared ideology – which, as any look at Stern’s political thinking will show (Hebrew), was indeed similar. So, if you’re a Jewish ultra-nationalist and you’re conspiring with the Nazis as they herd Polish Jews into ghettos, Im Tirzu will issue you a kosher certificate.

Snarkiness aside, both the Stern Gang and the El Husseini supporters turned to the Nazis because they were Britain’s most prominent enemies; and Britain was widely hated in the Middle East at the time, since it was a colonial occupier of much of it. Segal and Tadmor mention the 1941 Baghdad pogrom, the Farhud; they fail to note that it was led by a sister fascist movement, which was a part of Iraqi resistance to British presence in the country. For much the same reason – mostly justified hostility towards the British occupier – the two Stern gang assassins, Eliahu Khakim and Eliahu Beit Zuri, who killed British Minister of State in the Middle East, Lord Moyne, become for a short while heroes of the Egyptian nationalist movement. Ignoring the complexities of history and retreating historia lacrymosa is, of course, an old Jewish tradition; Yet, one would still expect a bit more nuance in the 21st century. Not from Im Tirzu, apparently.

The second point is much more important. A central Zionist slogan is “a land without a people for a people without a land”, which basically ignores the existence of Palestinians. Now, following Peters, Im Tirzu tries to convince us that there were no Palestinians prior to the Zionist arrival, and that they showed up only following Jewish immigration in the early 20th century, tempted by the so-called prosperity brought by the Zionists. That is, the 700,000 Palestinians expelled by Israel weren’t refugees at all, since they didn’t live in Palestine all that long, or something of the sort.

What a steaming pile of bullshit. As Prof. Yehoshua Porat noted, while skewering Peters’ book, Palestinian population – like the rest of the Ottoman Empire – began growing in the mid-19th century, following the demographic revolution: Better medicine and a series of new hospitals (some built by the government, some by missionaries) eradicated many of the diseases which caused infant mortality. According to the data of Sergio DellaPergola, the population of western Palestine (i.e., between the Mediterranean and the Jordan) nearly doubled itself from 1800 to 1890: There were 275,000 residents in 1800, and 532,000 in 1890. The Jews were clearly in the minority in Palestine: 7,000 in 1800, 43,000 in 1890. According to his estimates, the population of Palestine was 689,000, of which 94,000 were Jews. Furthermore, Palestinians were already exploring their nationality: The first Arab congress, held in Paris in 1913 as the Ottomans took a dim view of Arab nationality, received 387 telegrams of support. The largest number, 139, came from Palestinians (as quoted in Jonathan Schneer, The Balfour Declaration, location 703 in the Kindle edition).

No historian or chronicler is familiar with a Muslim immigration wave in late 19th century or early 20th century Palestine, and immigration waves tend to be rather noticeable. Furthermore, Asher Ginzburg, an early Zionist leader known as Ahad Ha’am, wrote in “Truth from Eretz Israel” (Hebrew), published in 1891, that

We who live abroad are used to believe that Eretz Israel is now almost wholly a wilderness, an untilled desert, and that anyone who wants to buy land in it may do so freely. But truly, this is not the case. It’s very hard to find, in the whole land, arable fields untilled; just sandy fields or rocky mountains, which is suitable only for orchards, and even this after much work and great expense […] not just the peasants, but the plantation owners too, do not sell lightly good land with no fault.

Later, he notes the existence of a merchant class, and the great railroad project of the Ottomans, which was a likelier catalyst of growth in Palestine than a few Zionist orchard-colonies, abandoned by most of the immigrants. For reasons unknown, even though Ahad Ha’am is generally considered to be a Zionist founding father (unlike, say, Stern), Im Tirzu does not have a Ahad Ha’am shirt. One wonders why.

To make a long story short, the legend of Palestinian refugees not being refugees is an attempt by Zionists to feel good about themselves and avoid responsibility for the crime on which Zionism is based: The uprooting of another people off its lands. This was not an accident and did not happen in the heat of battle: The tragedy of the Palestinian refugees is derived from the fact Israel did not allow them, once the battles were over, to return home. Now, given the time the decision was taken, and the conditions at the time, one may think it was a reasonable decision; but accepting its logic and at the same time denying Israeli responsibility for the creation of the problem demands performing a particular logic trick that only a Hasbara person can do.

The third point is the claim that the Palestinians are responsible for the expulsion of the Jews from the Arab countries, so they should kindly shut up. This claim is ridiculous: The Palestinians didn’t even have their own elected leadership, so claiming a Palestinian peasant who lost his house should be considered responsible for the actions of the Syrian or Egyptian government is merely a more polite version of saying “All these Ay-rabs are the same.” I was not aware that Segal and Tadmor partnered with Azmi Bishara in resuscitating the dying pan-Arabic ideology. One lives and learns.

At the end of the day, what Segal and Tadmor are doing is a sort of holocaust denial – one with much better PR, one which is enthusiastically supported by most of the Israeli public, but a holocaust denial nevertheless. Keep that in mind, the next time some Hasbara representative will bemoan the – deplorable – holocaust denial of much of the Arab world.