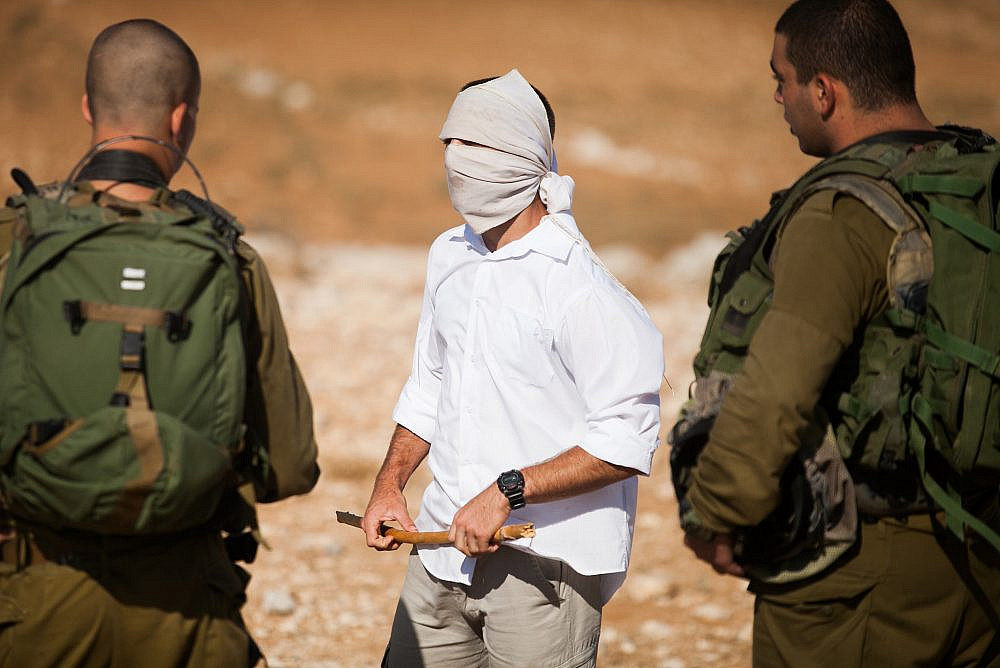 I was supposed to speak to Knesset members about the widespread phenomenon of settler violence on Tuesday. A group of Israeli anti-occupation organizations — our partners in the struggle to achieve our rights and defend our dignity on our own land — invited me to address the Foreign and Defense Affairs Committee.

But I couldn’t. Israeli politicians intentionally derailed the session in an instant, because they can. These right-wing forces want to hide and distort a truth that has long been made clear: settler violence is state violence.

Extreme-right MK Itamar Ben Gvir called Palestinian parliamentarian Osama Saadi (Joint List) on the committee a terrorist; he suffered no consequences for his heckling. Shortly thereafter, Hadash/al-Jabha MK Ofer Cassif was thrown out for calling the perpetrators of a pogrom in late September “settler-terrorists.”

When the commotion died down, there was no time left for me — the only Palestinian invited to deliver remarks on our lived reality in the occupied territories — to speak.

Had the politicians decided to listen, instead of making bad-faith both-sides deflections, here’s what I had planned to tell them:

Dear members of the Knesset,

My name is Ali Awad. I was born and raised in the village of Tuba in the South Hebron Hills, located in what your government has declared Firing Zone 918. I have lived under the threat of settler violence since I was born in 1998. As a child, this threat always existed in my mind alongside that of military aggression — and over the two decades of my occupied life, I’ve seen that they actually overlap entirely.

The army and the settlers work in tandem to steal our resources and suppress our freedom. Soldiers take our land under the guise of security, only to then give it to settlers to establish agricultural outposts. This is no accident. Settler expansion and violence take place under the protection of the army and with legal support. Whether by declaring a firing zone, or through use of outdated Ottoman laws, the government acts to seize control of huge swaths of land that are then declared state land, and made more susceptible to settler takeover. At every step of the process, there is full cooperation between the settlers and the military.

My village is in Area C of the West Bank (under full Israeli military control), and many families here are deprived of the ability to develop any kind of economic infrastructure. Our only option for subsistence is therefore shepherding and land cultivation. But ever since settlers established Havat Ma’on a few hundred meters away from my home — illegally, according to Israeli law — the land between our village and the outpost has been a regular site of harassment by settlers and the military.

Our families continue to graze in the area despite the risk of injury by settlers and arrest by soldiers. This past spring, though, the settlement expanded once again, which prevented us from accessing the remaining nearby fields where we regularly graze. 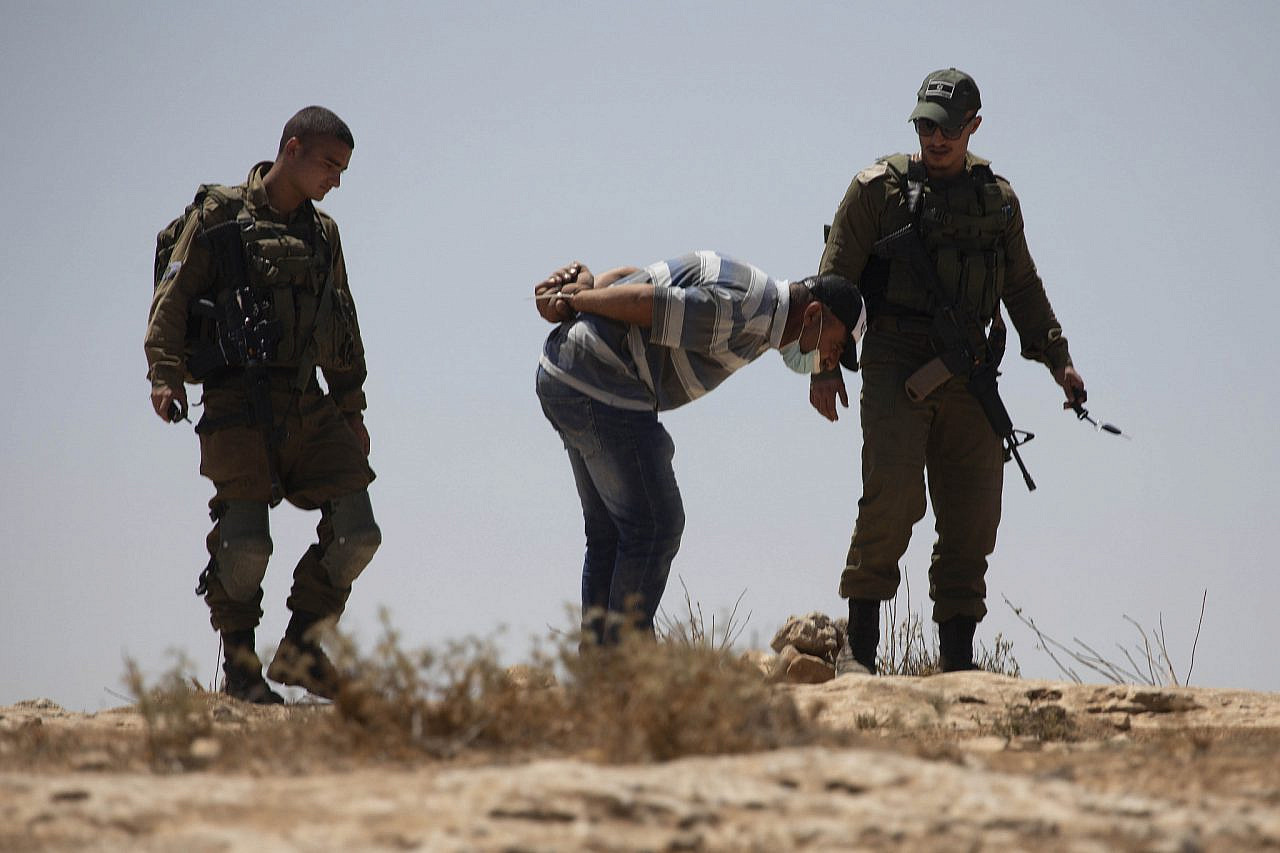 An arrested Palestinian stands handcuffed next to Israeli soldiers during a demonstration near a-Tuwani in the South Hebron Hills against new structures built in the nearby Israeli settlement of Avigail, August 20, 2021. (Oren Ziv/Activestills)

Over the past 10 years, due to land loss and lesser yields, we have had to purchase hay to supplement our grazing. Havat Ma’on’s increasing expansion this year meant we had to buy the hay much earlier than usual. And then, as night fell on June 1, Israeli settlers attacked our village and burned all the hay my family had bought to feed our sheep. Food that was supposed to last a whole year was destroyed in just two hours.

This chain of settlements, imposed by your plans, has separated our village from the nearest Palestinian city of Yatta, in many cases our only address for healthcare, water, and food. The two-mile road that once led to the city now passes through Havat Ma’on. The settlers succeeded in severing our access to Yatta through their violence. The last time one of us tried to use it was in 2002: the settlers beat my uncle and broke his tractor.

The road that runs through Havat Ma’on symbolizes the losses inflicted by the settlers, and permitted by the government. That road would have been my route to school — instead it was where my childhood was defined by settler violence. The nearest school is in at-Tuwani, which is on the other side of the outpost; in our village, Israel prohibits us from building any structures whatsoever, whether they are kindergartens or clinics.

But the kids of Tuba are determined to defend their right to education, despite the dangers. At first, that meant taking the long way around the outpost to get to the school. From 2002 to 2004, the journey to school for children as young as six was a six-mile walk; in 2004, American volunteers began escorting the students but settlers attacked the group during the first week of the school semester. Following a session by the Knesset’s Special Committee for the Rights of the Child that same year, the army began escorting the kids in order to guard against settler attacks, a policy which remains to this day.

The result has been a generation of scarred children who cannot go to school until soldiers show up. This very morning, before I was supposed to speak to you, I escorted my little cousins to the army pick-up point to ensure their safety and to see that the soldiers arrived on time. Seventeen years of putting a band-aid on the badly bleeding wounds caused by settler violence, instead of facing up to it.

If your new government seeks to “shrink the conflict,” the evidence must be seen on the ground. You could authorize permits for houses and guarantee access to all the basic services and infrastructure that you are obligated to provide for Palestinians under occupation. You could stop sabotaging our security and our freedom of movement.

Palestinian residents of the South Hebron Hills have lived through this escalation. Settlers here have hurled stones at Palestinians; destroyed houses and wounded sleeping toddlers; burned crops; set fire to my own family’s hay bales that we use to feed our sheep; uprooted Palestinian trees. And the sheep’s food they burned was only there because you let the settlers expand their outpost to our grazing land; the three-year-old’s skull was fractured because you told your soldiers to permit settlers to “let off steam.” The IDF has been present during so many of these assaults.

Is it my duty to remind you that a settler grabbed a government-issued gun from a serving soldier and fired at a crowd of Palestinians? It must be, since you refuse to identify, let alone take action against, the settlers and soldiers involved in that and other similar incidents.

Even those Israelis who made a different choice — the choice to be our partners, to join us in providing drinking water to an abandoned family living near an illegal outpost built partially on their land — went back home to Israel with broken bones, at the hands of your soldiers. We all saw those videos and we all know these stories. Yet only you design the policy and decide to benefit from this brutality.

Whose job is it to stop these acts of terror?

Your self-serving inaction is a choice and it is a choice that will continue to cause harm and cost lives. Settler violence is state violence. The blood shed in these attacks is on your hands, and the power to stop it is in your hands. Your policies enable it, and your policies can end it.