IDF soldiers do not use any crowd dispersal means to stop settlers throwing stones toward Palestinians in the West Bank village of Burin; several reportedly injured. 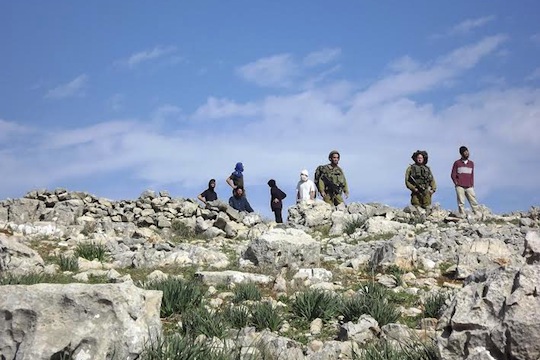 The settlers, some of whom appear to be minors, hurled a large amount of rocks at Palestinian residents who were working on a house on the edge of the village. This area has been attacked by settlers many times in the past.

In the photo above, Israeli  soldiers can be seen standing with the masked settlers. 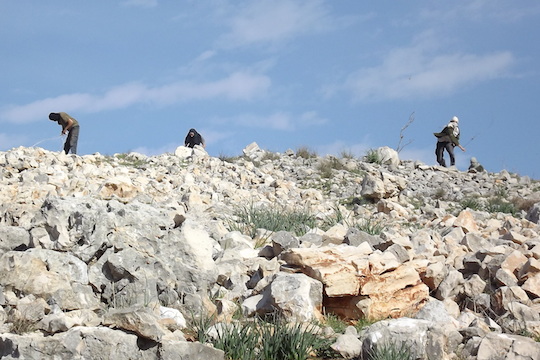 In the first video, the soldiers appear to chase after the settlers throwing stones but make no attempt to arrest or detain them. They do not use of tear gas or other crowd control means to disperse the settlers, which is almost always the case when dealing with Palestinian stone throwers.

It took over an hour for army and Border Police forces to take control of the situation, according to Yesh Din. The Israeli authorities ordered the Palestinians to stop working at the site, which is inside the village and under Palestinian civil control (Area B). A number of Palestinians, including the cameraman, were lightly injured in the attack.

Just last week, in the nearby village of Qusra, a large group of violent settlers were caught by Palestinians, some of whom saved them by calling the IDF to come evacuate them.

It became clear after the event, as reported here by Yossi Gurvitz for Yesh Din, that the IDF actually identified the group as it descended toward the village to attack it, but did nothing to stop the settlers, claiming they “lost eye contact.”

More on settler violence in Burin:
WATCH: Masked settler beats Palestinian with metal pipe
While you were sleeping: The systematic terrorization of Burin