Controversial poster juxtaposes Holocaust survivors with IDF soldiers. The only thing is, the Nazis’ victims in the picture are probably not Jewish.

Ami Kaufman reported here on a tasteless Stand With Us poster, politicizing the memory of the Holocaust in order to support Israeli policy and the IDF. Here is the poster, and I urge you to read Ami, who makes all the important points. (UPDATE: Stand With Us took the picture off their Facebook wall) 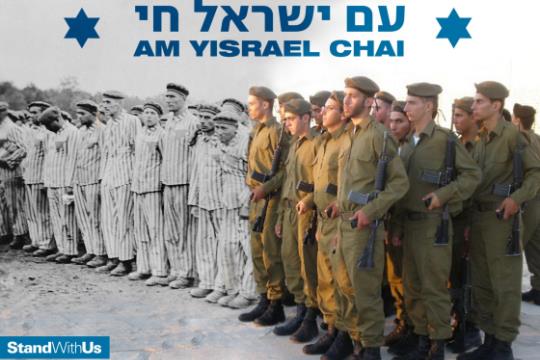 I, however, want to bring attention to an interesting fact (pointed out by a commentator on the Stand With Us Facebook page): the survivors in the poster are probably not Jews. They have single, not double triangles on their shirts, which means that they could be political prisoners, or those deemed criminals by the Nazis (from homosexuals to the mentally ill). Check out the Wikipedia entry on Nazi concentration camp badges for more details.

The original picture was taken in Buchenwald, Germany – a camp known for the diverse group of prisoners who were sent to it – Jews, Gypsies, political prisoners, Soviet soldiers and many more. Actually, this very same picture is used in another article to illustrate the Nazi classification system. 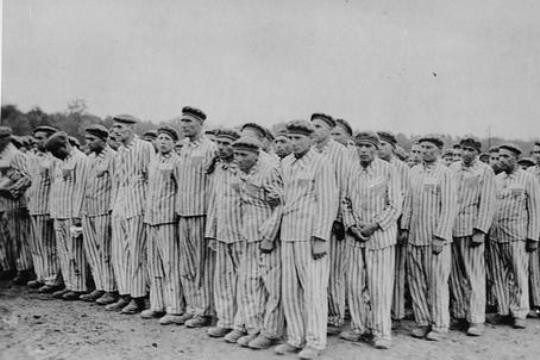 Prisoners standing during a roll call. Each wears a striped hat and uniform bearing colored, triangular badges and identification numbers. *”Buchenwald, [Thuringia] Germany, 1938-1941. [http://www.ushmm.org/ United States Holocaust Memorial Museum]
Chances are, therefore, that those prisoners in the picture are not Jews, which transforms the Stand With Us poster into something completely different. The image takes a life of its own, and without taking anything away from the memory of the Jewish tragedy, it leaves us with a humanistic and universal lesson: not just that the Holocaust should never happen to us again, but rather that this should never happen to anyone.

Related
Why Nazi Germany references are banned on my blog
Holocaust day: Prove that you are alive (updated)
Hasbara: Why does the world fail to understand us?