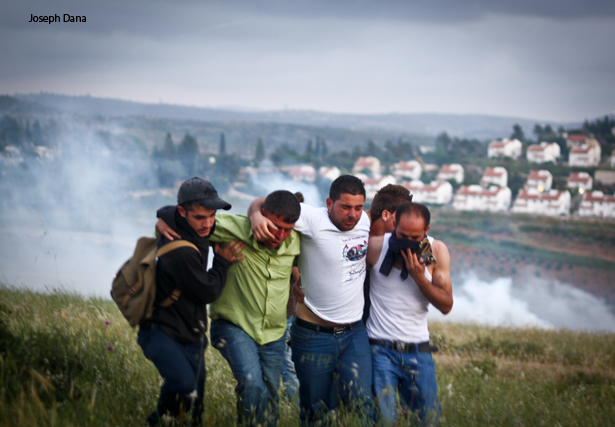 Getting to Nabi Saleh is not easy. The army closes all entrances very early on a Friday, the day which has seen demonstrations taking place for the past two years. This forces Israeli and international activists that wish to join the unarmed and largely nonviolent demonstrations to park kilometres away and hike through valleys and up small hills to reach the village.

Israelis soldiers were inside the village long before the demonstration began on Friday, creating an uncomfortable air of uncertainly amongst villagers. Adding to the uncertainty were the aggressive comments of one particular group of soldiers who had taken over a rooftop in the middle of the village.

“Soon,” one of the arrogant soldiers barked at an elderly villager in horribly accented English, “I will make your house go boom.” It was not clear if the solider meant that he would blow his house up or attack it with tear gas and stun grenades. Regardless, the elderly man was clearly shaken by the soldier’s violent comment.

Men and boys emerged from mid-afternoon prayers determined to continue the demonstration despite the military presence. Roughly 12% of the village’s male population, out of a total population of 500, have spent time in Israeli military jails for demonstrating. Bassem and Naji Tamimi, the Popular Committee leaders of the village, are currently in jail. They have not been sentenced, however based on similar situations in Bil’in, they will be in jail for the next year or two. Their crime: leading unarmed demonstrations which bring Israelis, Palestinians and internationals together to resist occupation. 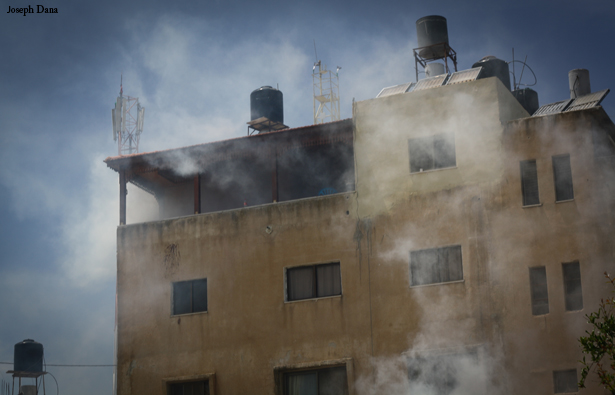 Within minutes, soldiers from three directions opened fire on the demonstrators. Tear gas filled the air as stun grenades went off with disorientating thunder in all directions. Most ran to the relative safety of houses but it did not help. Soldiers began firing tear gas at the houses themselves. Children, some as young as four or five years old, were choking inside their own homes and had nowhere to run. This lasted for roughly five hours as the soldiers established an undeclared curfew over Nabi Saleh.

As the sun began to set, soldiers relaxed their curfew. Due to the relentless teargas, there had been no clashes between stone throwing Palestinian youth and soldiers. The general store re-opened and a relative calm descended on the village despite the presence of a dozen heavily armed soldiers in the village centre. Occasionally the soldiers opened fire and covered the area again with tear gas. Everyone then sought refuge inside homes with the windows covered by great big rugs to keep the tear gas out. After half an hour, people slowly emerged from their homes and calm returned.

As the soldiers were finally preparing to leave for the night, the infamous ‘Skunk’ truck rolled into the village, prompting a rush of excitement from the young men of Nabi Saleh. In an act of provocation, the truck drove around the village threatening each house with its pungent chemical mixture. Village youth responded by throwing stones at the armoured truck which in turn provoked a violent reaction in the form of tear gas and rubber bullets from the patrolling soldiers. Clashes continued between soldiers and youth until 8 pm when the last solider returned to the settlement/army base of Halamish.

I have been covering the saga of Nabi Saleh’s unarmed resistance to Israeli occupation since the beginning of the demonstrations over a year ago. Friday’s demonstration was different. I saw a village under curfew. I saw people forced to huddle inside their homes because they had chosen a path of unarmed resistance in the spirit of the American civil rights movement. I saw children choking on tear gas inside their own bedrooms. The only rationale that explains this behaviour is that Israel wants to harass Nabi Saleh and crush its nonviolence.

I thought to myself on the way back to Tel Aviv, what was going through the minds of the soldiers as they opened fire on Israeli and Palestinian civilians? Did they think that their behaviour was heroic? Were they driven by hate and fear? Has our nationalism got to the point where it drives people to blindly terrorize civilians exercising a basic human right? The sad answer is yes, but don’t take my word for it, come to Nabi Saleh next Friday and see for yourself.

Update:
Below is a video of the demonstration. Note how soldiers attempted to maintain strict curfew over the village. At times, this meant going into houses, demanding id cards while throwing tear gas and stun grenades at residents watching from their courtyards and decks.