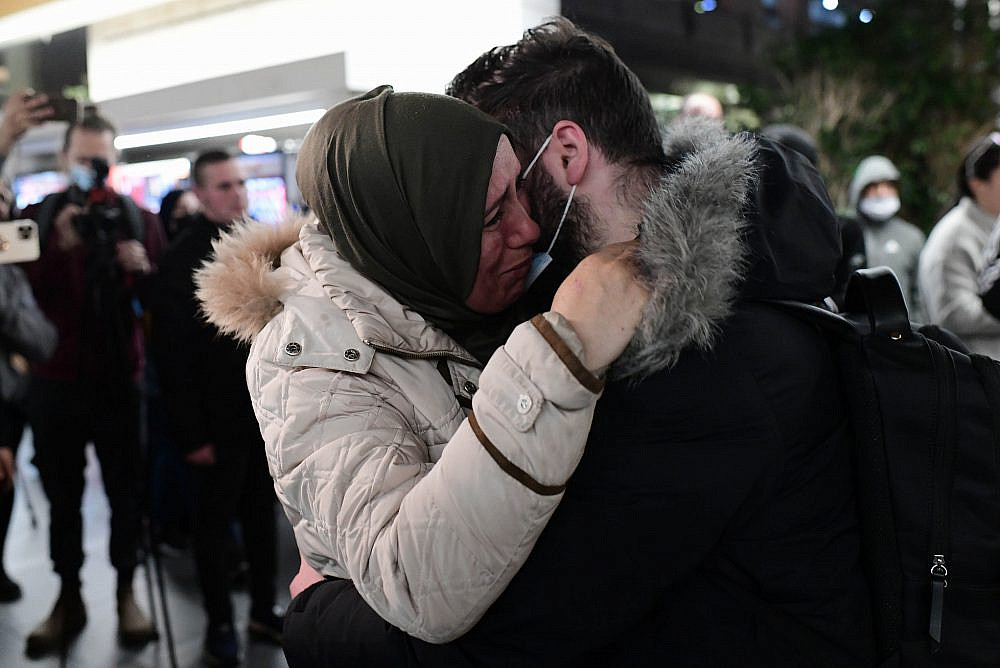 Palestinian students arriving from Ukraine on a rescue flight are welcomed by their families at Ben-Gurion International Airport near Tel Aviv, March 1, 2022. (Tomer Neuberg/Flash90)

The exodus out of Ukraine since Russia began its invasion has provoked questions about discrimination between the uprooted. Last week, social media was awash with claims that white Ukrainian refugees at the border with Poland were given preferential treatment compared to other groups, including people from many Middle Eastern and African nations who were living or studying in the country. While initially denied, Flippo Grandi, the UN High Commissioner for Refugees, has since confirmed the allegations.

The widespread reports of racism at the border reveal that the preference for white Ukrainians was not (only) a Polish or European discriminatory policy. It was, to a large extent, driven by Ukrainian officials who assumed violent control over who gets to flee and how.

The plight of Palestinian students in Ukraine further confirms this pattern. And, remarkably, it has also shed light on a still under-discussed aspect of the refugee crisis: the role of diplomatic protection in enforcing the rights of non-nationals. When the reports of racism at the border emerged, African governments immediately responded with protest to European states and at the UN demanding that their citizens be equally protected. But despite multiple reports of discrimination against Palestinian students, no state has raised similar protest on their behalf.

During international crises, Palestinians living under indefinite occupation, including East Jerusalemites, often fall between the cracks in diplomatic protection due to both Israel’s failure to recognize and allow a sovereign Palestinian state, and Israel’s simultaneous refusal to ensure the rights of Palestinians as subjects under its de facto rule. This raises a crucial question with real-world consequences: to what extent must Israel extend its diplomatic protection to Palestinians studying abroad, including those currently fleeing Ukraine?

Detained, beaten, and starved in the cold

Muhammad Khatib, 25, from the neighborhood of Sur Baher in occupied East Jerusalem, is a fourth-year Palestinian medical student at Taras Shevchenko National University of Kyiv. According to him, when the invasion began on Feb. 24, Israel’s Foreign Ministry began publishing warnings that war was on the horizon. It was hard for him to believe at first, especially since the university announced that everything was okay and there was no need to leave. But Khatib decided not to heed the university’s claims: “I’m not an idiot — I got on a flight with 10 other Arab students from across the country back home,” he said. 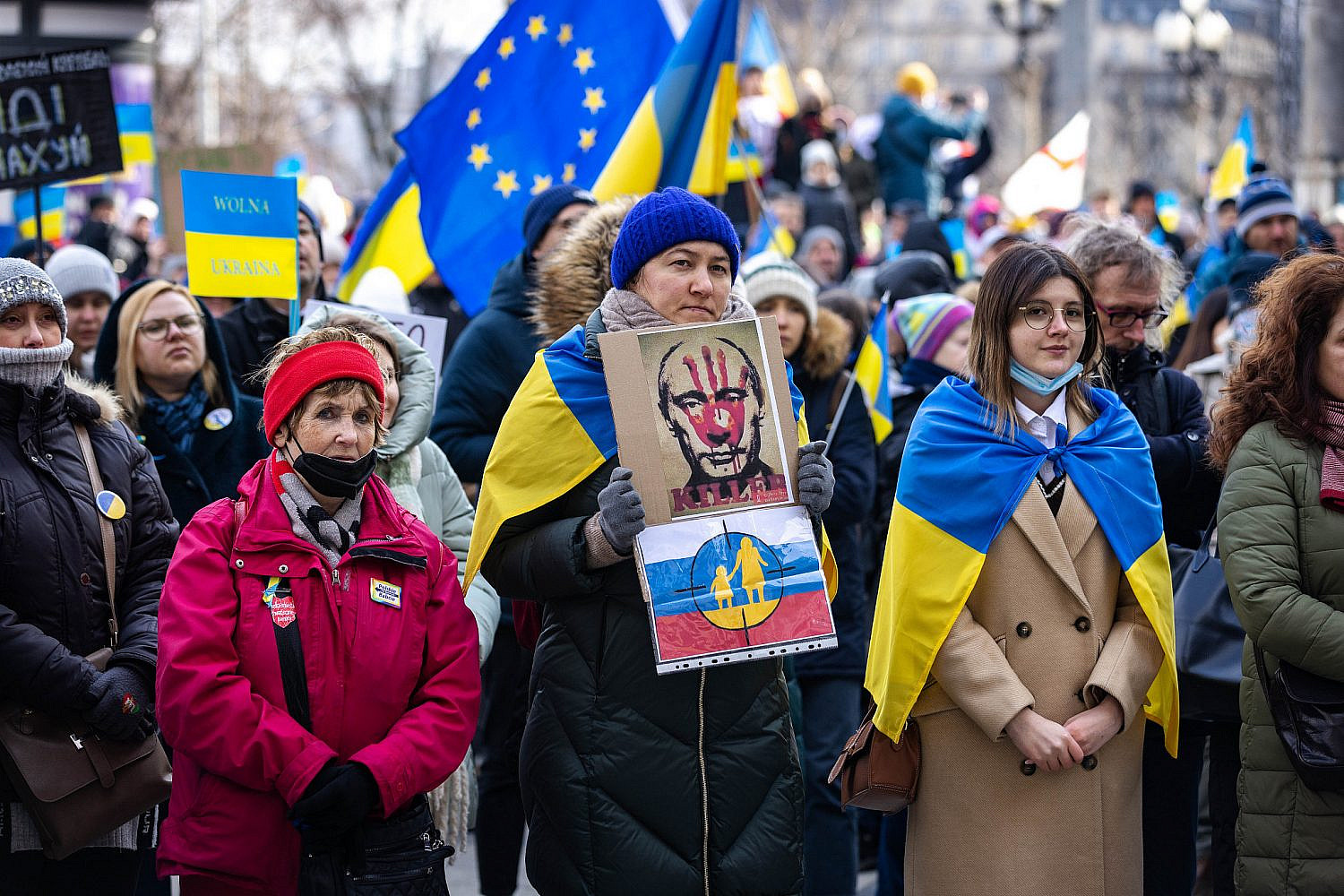 Six of his fellow Arab students, however, remained stuck in Ukraine as the war broke out, and were forced to flee by train and later by foot for 19 hours in the cold. They were then detained at the Ukrainian-Polish border for two days. Some of these students, like Muhammad, are residents of East Jerusalem but not Israeli citizens; instead of a passport, they have a blue Israeli ID card with a special travel document that Israel issues for them.

Khatib was in touch with Israel’s Foreign Ministry to try and ease the exit of his friends from the Polish border, but was angry when the ministry said it was unable to help them. Khatib does not buy their claim: “[Palestinian] East Jerusalemites who arrived at the border with [Israeli] Jews did not get stuck there,” he said.

Majdulin Arrar from Ramallah and Yahyia Atrash from East Jerusalem, both 23, were among the Palestinians who tried to leave Ukraine later and found themselves stuck at the border. The two were more optimistic than Khatib and remained in Kyiv, which for years has been home to thousands of Palestinian students. Arrar says that when it became clear things would become dangerous, her parents called her to say she should remain in the city so as to avoid dangers on the way home. Then came an explosion in the early hours of the morning on Feb. 26. “We saw the building next to us was hit,” Atrash said.

Along with a few other students, they arrived at the train station in Kyiv later that morning, but encountered difficulties finding space on the train. The station was tumultuous: train rides were free, but boarding initially seemed restricted to Ukrainian nationals only. When they eventually got on a train in the evening, Arrar said, they began to hear bombing around them, leaving them stuck at the station for several more hours. One woman approached them to charge them for the trip “just because we are foreigners,” Arrar continued. After a long wait, the train left the station and finally arrived in Lviv near the border with Poland in western Ukraine. From there, they began their journey on foot.

That, Atrash said, was the easy part. 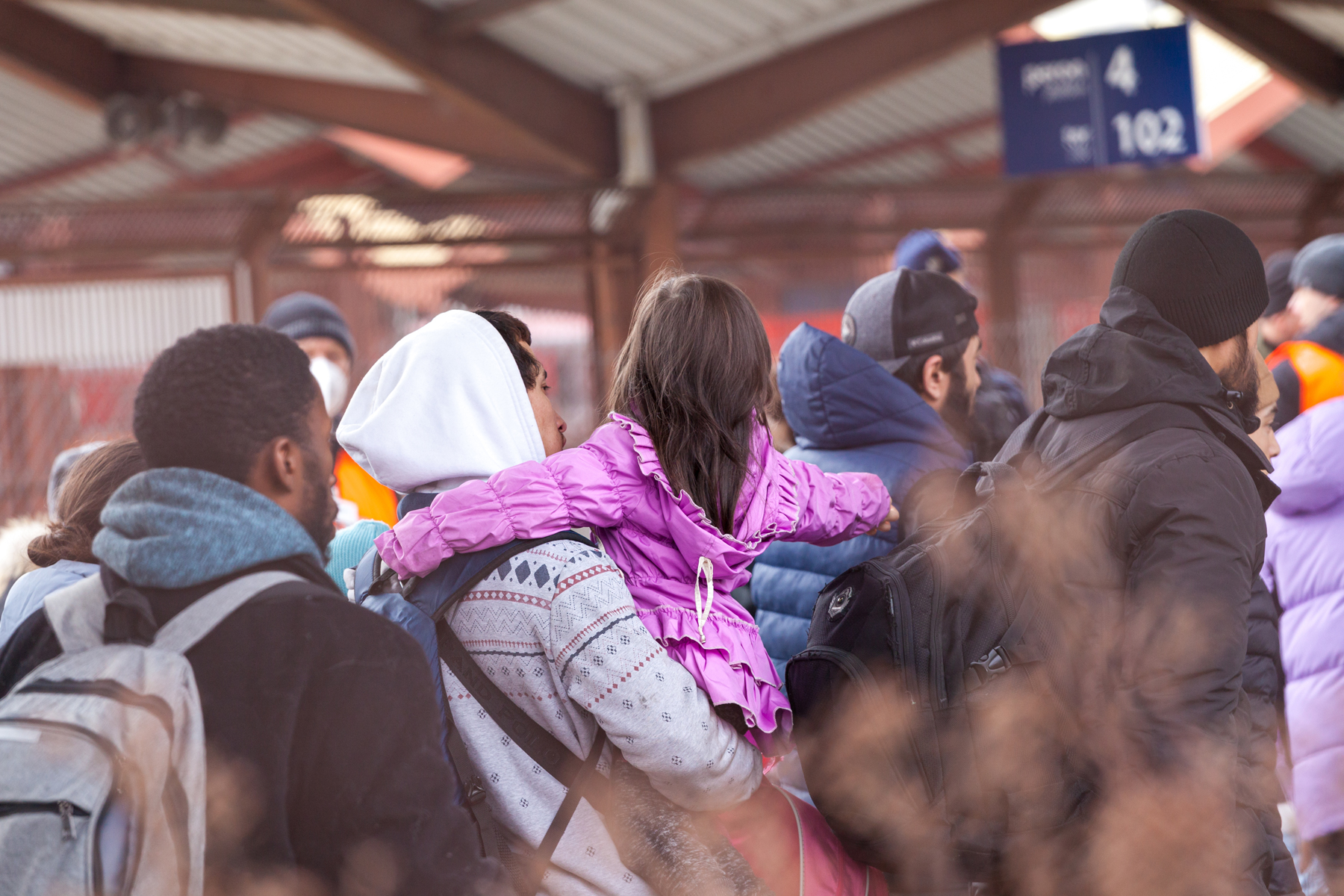 When they arrived at the border at 2 a.m. on Feb. 27, it became clear that only Ukrainians were being granted permission to leave, with priority given to women. Arrar and the other women in the Palestinian group waited five hours before the group was eventually split up and the women were sent to the Polish side.

The men, on the other hand, waited another two days at the border, during which they were beaten, cursed at, and threatened by Ukrainian security personnel. Atrash described how the authorities forbade them from taking photos, and that one of the people with them was beaten for doing so. The group suffered from a severe shortage of food, as well as from a lack of warm clothing at near-freezing temperatures.

“We sat there with about 2,000 foreigners from all sorts of countries,” Atrash added, “some of them students, a lot of Africans. We didn’t know what was going on.” Unlike Khatib, who was angry at the Israeli Foreign Ministry, Atrash’s anger is directed at the Ukrainians: he does not understand why foreigners were made to wait in the cold while Ukrainian citizens left the country freely.

‘They’re left to survive on their own’

Palestinian students in Ukraine are part of a larger community of foreigners from developing countries who found a place to study outside their homeland. But their status as residents of occupied East Jerusalem who lack Israeli citizenship has not made the situation easy for them. As one source remarked to the newspaper Asharq al-Awsat, “because the Palestinians have experienced multiple wars and conflicts, they understand what it means to escape by tooth and nail from war and return across continents to the constant, low-intensity war against the occupation.” 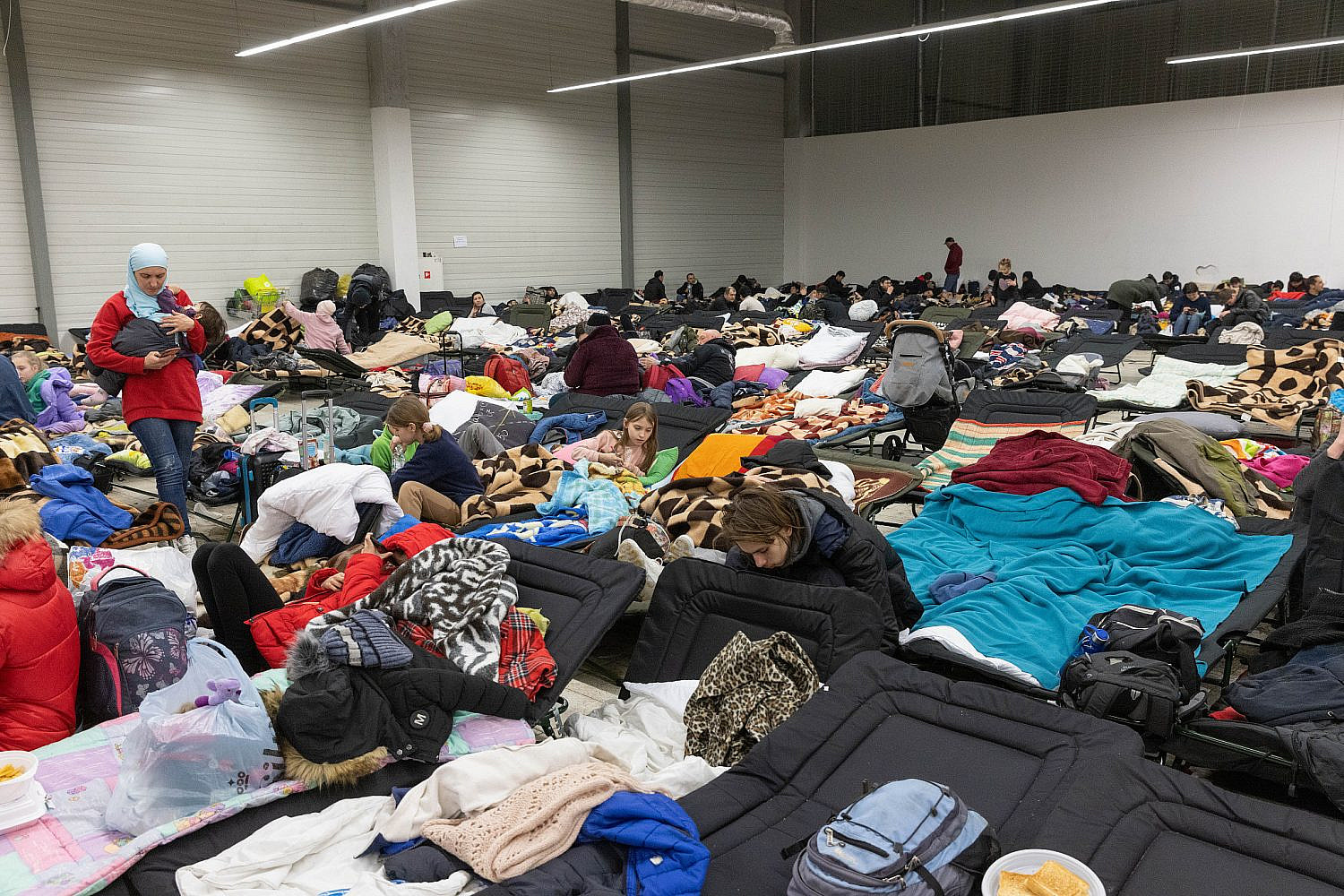 Under international law, the doctrine of diplomatic protection allows a state to protect its citizens from security emergencies and natural disasters even when they are abroad. But what is the status of those who carry a blue Israeli ID but do not have citizenship? Offering such diplomatic protection is ultimately the privilege of states, and because Israel does not recognize Palestine as a sovereign state, the Israeli Foreign Ministry cannot claim that Palestinian Jerusalemites receive diplomatic protection from another state.

The East Jerusalem travel document that accompanies the blue ID, meanwhile, indicates that its holder is “Jordanian” — a remnant of the kingdom’s control over the territory before 1967 — yet most of its holders do not have a Jordanian national ID number or citizenship. Samer Sinjilawi, an East Jerusalem political activist and chairman of the Jerusalem Development Fund, explains that this travel document does not grant any real rights in Israeli consulates and embassies abroad. In his own experience having lived in Spain for years, requesting assistance from Israeli authorities usually requires humiliating strip searches and backroom pleadings.

In the context of the war in Ukraine, the Palestinian Authority has been active in assisting Palestinian students by making efforts to grant various forms of diplomatic protection. According to Ambassador Ahmad Al-Deek, the Palestinian Ministry of Foreign Affairs has formed four centers for emergency response, providing service to Palestinians at the borders, in Ukrainian villages, and in the heavily-bombed city of Kharkiv, where one Palestinian student died of a heart attack.

Yet some Palestinian students are not as easily served by the PA, among them Gazans and Jerusalemites. The PA foreign service is willing to help Jerusalemite residents, but does not have control over the relevant information and often has no power to do so. “They can fly you to Amman, but that doesn’t help if you need to reach Tel Aviv,” Sinjilawi said. Moreover, “the Palestinian Authority has distanced itself from East Jerusalemites. They are neglected and are left to survive on their own.” 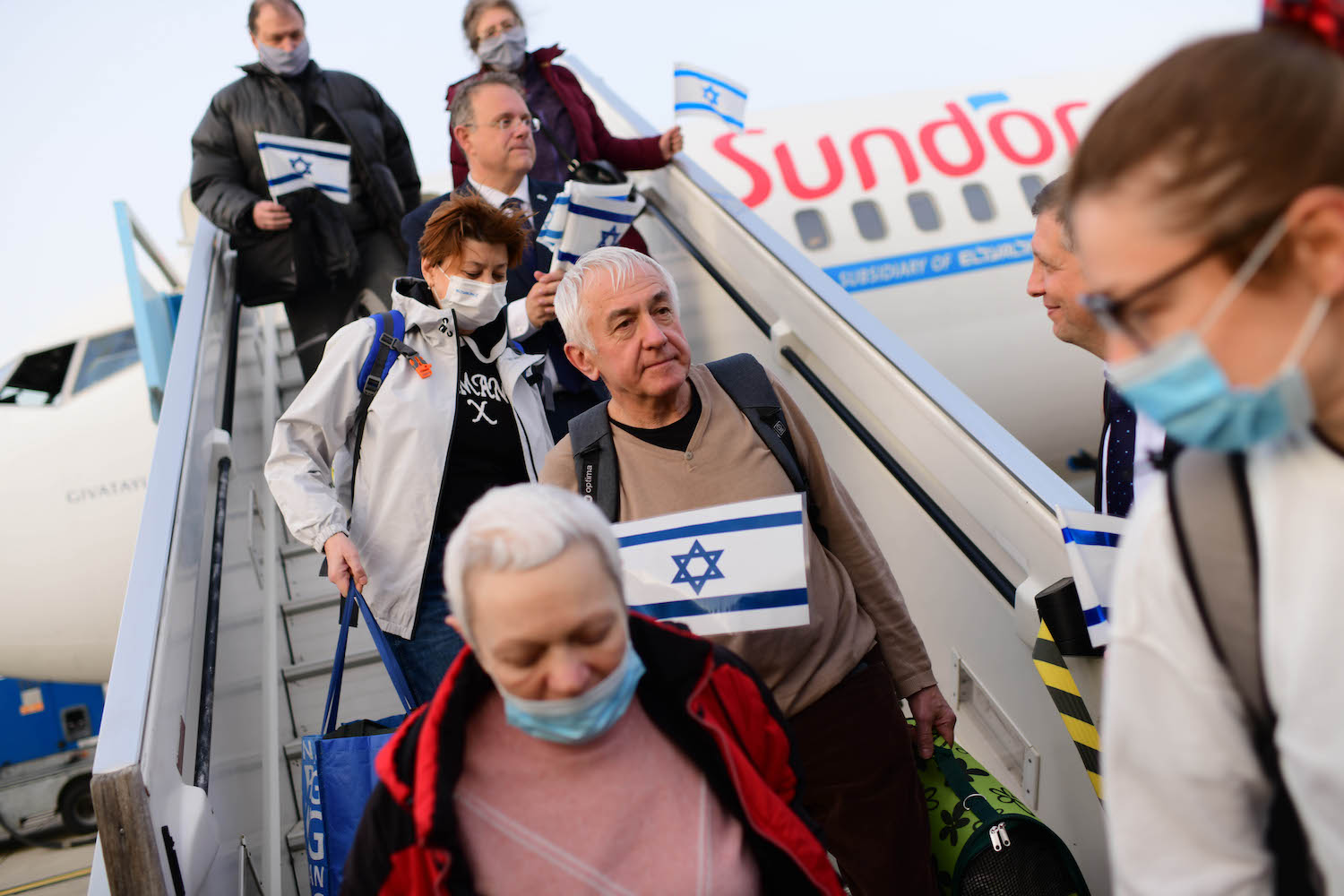 On Feb. 28, Kenyan Ambassador to the UN Martin Kimani said that “The mistreatment of African peoples on Europe’s borders needs to cease immediately, whether to the Africans fleeing Ukraine or to those crossing the Mediterranean.” From the perspective of a developing state, these border injustices should be understood in international legal terms as matters of diplomatic protection, perhaps even more than they concern refugee rights (a framing more familiar in the European debate).

Against this backdrop, the experience of Palestinian students who have fled Ukraine reveals Israel’s ambiguous positionality in the face of crisis: one of seemingly robust sovereign generosity toward Ukrainian Jews, understood as would-be citizens by virtue of ethnic-religious ties; and at the same time, a diminished stance toward Palestinians, unwilling to provide a minimum floor of non-discriminatory diplomatic protection to people living permanently in areas where it has imposed its sovereignty.

The feeling of disregard expressed by the Palestinian students is thus the result of structural characteristics of Israel’s control. When calamity comes abroad, they cannot rely on a state that will have their backs. Israel is currently making significant efforts to grant a form of protection beyond its citizens, to those who have Jewish roots and to some extent to non-Jewish Ukrainians as well. But in such extreme circumstances, all groups living under Israel’s de facto sovereignty should receive its diplomatic protection.

Itamar Mann is an Associate Professor of Law at the University of Haifa Faculty of Law, where he teaches and researches international law and a number of related courses. He is also a legal adviser at the Global Legal Action Network (GLAN).