Israeli security forces attacked a demonstration commemorating Mohammed Abu Khdeir last Thursday, including pepper-spraying in the face two Palestinian journalists working for a Jordanian news station. Troops also used tear gas and stun grenades against participants in the demonstration, which took place near the settlement of Geva Benyamin in the central West Bank.

The two journalists, who were covering the event for Jordan’s Ro’ya TV, are wearing bullet-proof vests clearly marked as “press” in a video of the incident released by the network. Israeli soldiers and Border Police officers can be seen manhandling Nebal Farsakh, the station’s bureau chief for the Palestinian territories, and Mohamed Shousheh, her cameraman. After a brief scuffle Farsakh is seen running out of the fray screaming, her face covered in orange stains — a telltale sign of pepper spray. Shousheh is also seen with the same orange stains around his eyes, and is visibly distressed.

Israeli Border Police officers are also seen shouting at and pushing other journalists in the video, even though they are also clearly marked as members of the press. Maan News Agency reported that 11 people were injured during the demonstration.

Journalists and activists have reported numerous incidents of Israeli forces pepper-spraying non-violent demonstrators in the West Bank in recent months. The IDF is currently planning to distribute pepper spray to all non-combat soldiers, starting from 2016. Although considered a “non-lethal” weapon, pepper spray is a powerful inflammatory agent that can cause serious injury and even contribute to death. 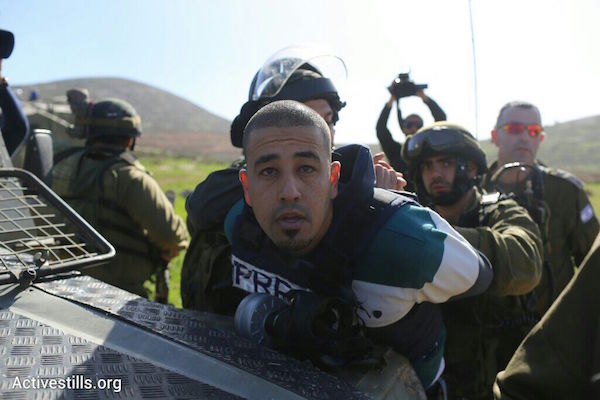 In May, Israeli forces fired tear gas at Palestinian journalists marching in a World Press Freedom Day event in Bethlehem. Two weeks later Nidal Ashtiyeh, a photojournalist with Chinese news agency Xinhua, was shot in the eye with a rubber bullet.

In mid-June, Palestinian journalists covering clashes between Israeli forces and Palestinians in Jalazon refugee camp were attacked by Israeli soldiers who threw stun grenades at them, cursed them and pointed their guns at them. This incident was also caught on video.

Israel’s position in Reporters Without Borders’ World Press Freedom Index fell five places in 2014. RSF cited attacks on Palestinian journalists, the killing of journalists during Operation Protective Edge and the government’s censorship during the war as reasons for the Israel’s lower ranking.

Asked to comment on the Ro’ya TV video, a Border Police spokesperson alleged that the video was mendaciously edited, that the demonstration was illegal and that officers used reasonable force in order to disperse it. The spokesperson did not acknowledge or explain the attack on the journalists.

Correction:
A previous version of this article mistakenly identified the two journalists as Jordanian. The two are in fact Palestinian journalists working for a Jordanian satellite news channel.