When Israeli spokesmen defend the IDF’s actions in Gaza by asking what you would do if rockets rained down on your home, the example of Northern Ireland can serve as one response.

Over the last weeks Israeli government spokesmen have provided cover across international TV and radio airspace for their military onslaught in Gaza. They’ve tried their best to respond proportionately, even when a small minority of irritating journalists insists on asking questions about the massacre of children.

However, there have been times when these spokesmen had no other choice but to wheel out the big gun, set piece question against the threatening fire of journalistic inquiry: “What would you do if rockets were being fired at you?” The question hits the target almost every time.

It’s a killer blow question when no journalist is armed with an answer. So, in the interest of promoting even greater proportionality in this ongoing war of words, I would like to offer the few brave anchormen and women out there a possible response. 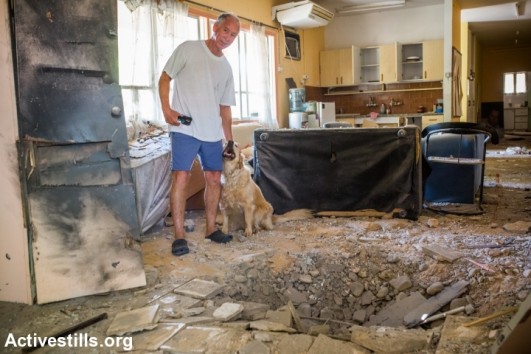 Israelis check the scene in which a mortar shot from the Gaza Strip had a direct hit a house, southern Israel, August 21, 2014. (photo: Activestills)

During the ‘troubles’ in Northern Ireland, civilian deaths were caused by the British Army, the Loyalists and Republican paramilitaries. But for the purpose of answering the Israeli question it is useful to look at the major bombing campaigns by the Irish Republican Army (IRA) that took place across England. These campaigns were far more destructive than anything coming out of Gaza. There were approximately 10,000 bomb attacks during the conflict – about 16,000 if you include failed attempts. A significant proportion of them were on English soil.

A time bomb was detonated at Brighton’s Grand Hotel, where Margaret Thatcher and her cabinet were staying for the Conservative Party conference. Thatcher narrowly escaped death, five people were killed (including an MP) and 31 injured. The Queen’s cousin, Lord Louis Mountbatten, his grandson and three others were blown up while fishing off the coast of Ireland. In Manchester city center a 3,300-pound bomb caused £1.1 billion (today’s value) in damage and injured 212 people. The Bishopsgate bombing in the city of London cost £350 million to repair and injured 44 people. And, as those of us who lived through those times will remember, there were numerous bombs in pubs and shops, on high streets and shopping centers, in train stations and on the London underground. The thousands of rockets fired by Hamas over the last month have killed six civilians in Israel, along with 64 soldiers, while the IDF has killed 2,104 Palestinians, including at least 500 children.

Despite the effectiveness of the IRA campaign, it would have been politically inconceivable and morally unjustifiable for the Royal Air Force to bomb the streets and homes of the republican communities in North or West Belfast – the communities from which the IRA came and amongst which it lived. It would have been unacceptable in Britain and, indeed, to the U.S. government at the time. The British army and intelligence services did terrible things in Northern Ireland, but such a wholesale massacre of civilians would have been unconscionable. The answer to the question of what would you do? In Britain’s case at least, faced with a destructive bombing campaign, it did not respond by sending in warplanes to bomb schools, hospitals or terraced houses. 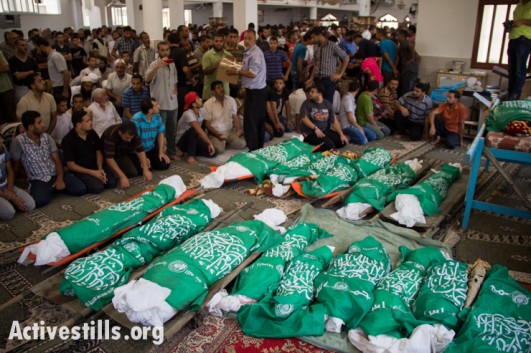 Why is it that Israel, the U.S. and the UK government don’t find the massacre of defenseless civilians, concentrated in a densely populated strip of land, by a hi-tech air force simply unacceptable? It could be that Catholics in Northern Ireland, despite a history of oppression, were not dehumanized in the late 20th century in the way Palestinians are today. They were integrated into the fabric of British society with significant communities in major cities and with a large proportion of British people claiming some Irish heritage. And U.S. governments, making domestic electoral calculations about the Irish-American vote, would have responded fiercely if such a slaughter took place. Similar calculations made by the Obama administration about the pro-Israeli vote and lobby result in a deafening silence on Gaza.

So, is the military onslaught really about the rockets from Gaza? The Palestinian West Bank suggests that it is not. Not a single rocket has been fired from that territory; yet, it is still subject to daily punishment from the Israeli military and settler communities. This includes encroachments on Palestinian land, mass detention without trial, the killing of children, the destruction of homes, the inability to move freely, the building of a wall that separates families, and the daily humiliation of an entire people. The message is clear to Palestinians when it comes to rockets: you’re damned if you do (use them) and you’re damned if you don’t. This, in effect, means that the choice offered to the people of Gaza is to remain docile in a suffocating ghetto or be destroyed.

When Israeli spokesmen like Mark Regev fly onto our TV and radio airspace and ask in Australian or American accents, “What would you do?” It is time to start answering them.

John Jackson is an author and commentator who has led major public campaigns on a range of international issues. He has a particular interest in strategic non-violent struggle, and co-authored Small Acts of Resistance, which explores the creative ways people have developed to challenge injustice.

Related:
The world is letting Israel get away with it again
Gaza deaths aren’t worth a mention in leading Israeli newspaper
Not even a ‘bump on the wing’ these days when killing Palestinians
COMIC: What if Mahmoud was named Jonah