The campaign against the Left in Israel reaches a new low: a planned protest at the wedding of an anti-occupation group’s director and her wife-to-be. It shows that when dissent is characterized as treason, there is no area of one’s life that is off-limits.

It’s a clear sign of the times when protesting at someone’s wedding is considered a legitimate form of political activism. It’s an even clearer sign when such a suggestion barely raises an eyebrow and when someone responsible for educating young people actually gets on board with the idea.

But this is exactly what happened in Israel over the past week when a well known far right-wing activist found out that Breaking the Silence executive director Yuli Novak and her girlfriend, Anat Manielevitch, are planning on getting married.

The right-wing activist, Shai Glick, who claims he has had Breaking the Silence events shut down and convinced Israel’s defense and education ministers to cut all ties with the group, announced on Facebook that he hopes Novak is jailed but if she isn’t, that he will “protest at the wedding of an enemy of the Jews.”

Protesting weddings in Israel is a tactic of the extreme right-wing organization Lehava, which demonstrated outside a wedding between a Palestinian Muslim and an Israeli Jew (who had, in fact, converted to Islam) two summers ago. In an interview with Israeli media outlet Mako [Heb], Glick said: “I collaborate with [Lehava]…within the law.” 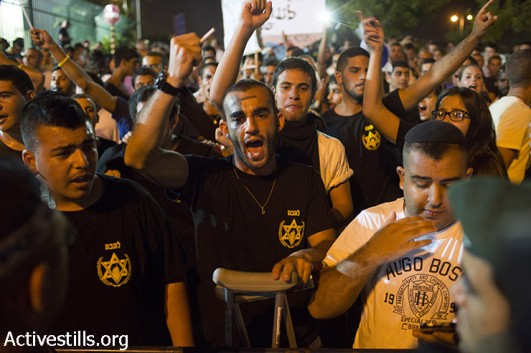 Right-wing Lehava activists shout slogans as they protest outside the wedding hall where Mahmoud Mansour, a Palestinian Israeli, and Morel Malcha, a Jewish Israeli, got married on August 17, 2014 in Rishon Letzion. Police arrested at least 7 right wing protesters, out of over 300 who were protesting against the wedding. (Oren Ziv/Activestills.org)

Joining the far-right activist in his mini-campaign against Novak and Manielevitch’s nuptials was Amichai Shikli, the director of a very influential and prominent Israeli pre-military academy, and one of the founders of an IDF reservist group that campaigns against Breaking the Silence. Shikli responded to Glick’s announcement with demeaning comments about Novak’s sexuality and said that he too would go to the wedding.

(Manielevitch is herself closely involved in the world of pre-military academies, which is considering whether to continue allowing Breaking the Silence members to speak with its students. The current decision is to allow each individual academy to set its own guidelines.)

To reiterate, Shikli is in charge of an academy through which hundreds of young Israelis pass, many of whom go on to serve in the IDF’s elite combat units. This cannot be dismissed as an attack coming from the fringe: he is an integral part of the Israeli establishment.

Shikli contacted Manielevitch in private to apologize, but chose not to do so in public, an apology she did not accept. He also wrote a post claiming that he has nothing against the LGBT community, but deleted it shortly afterwards. I have so far been unable to reach Shikli for comment. This post will be updated if and when I receive a response.

There is no relation between me and homophobia — quite the opposite. I respect and admire the gay community and support their struggle. My struggle is only against Breaking the Silence. Likewise, I condemn all violence, including that of Lehava, as it says in the article from which you quoted that I am a part of Lehava, which is incorrect.

From personal experience, attacks on one’s political views can all too easily devolve into homophobic and gender-based slurs. In this context, that shift is significant for two reasons. Firstly, it demonstrates once again that being queer and/or a woman is still seen as a point of weakness that can be exploited to delegitimize someone’s opinions by othering or patronizing them. Such tactics are indecent and degrading. 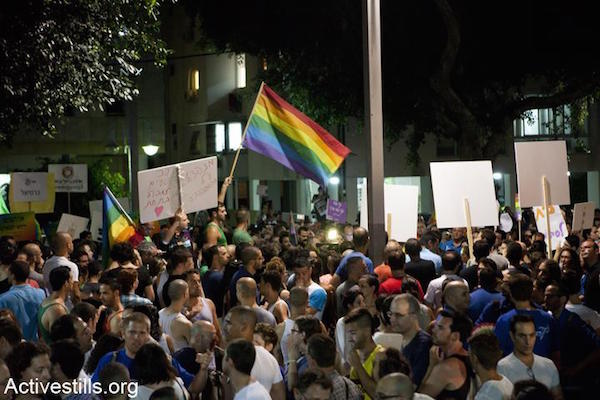 Secondly, and this is far more specific to Israel-Palestine, it points to the fact that the country’s much-lauded respect for LGBT rights is off-limits to anyone who doesn’t fit the increasingly narrow description of a loyal citizen. The Aguda, the country’s leading LGBT rights and advocacy organization, a few days ago sent a letter to Defense Minister Moshe Ya’alon and various senior figures at the council for pre-military academies in protest at Shikli’s behavior. It will be interesting to see what response they get, if any.

Moreover, openly homophobic views are not exactly unheard of in Israel’s political echelon, from a Yisrael Beiteinu MK declaring that gays need therapy to Jewish Home’s Bezalel Smotrich calling himself a “proud homophobe.” (Smotrich recently attended an official event of Birthright Israel, an organization whose proposed mission is to “strengthen Jewish identity…and solidarity with Israel.”)

Leaving aside how offensive, misguided and crass it is to protest at someone’s wedding because you don’t like their political opinions, and how immature it is for two grown men to publicly make disparaging comments about someone’s sexual orientation, the fact that this is taking place within the context of a political witch-hunt is intensely disturbing.

It speaks to the ongoing emergence of a socio-political climate in which voicing dissent is considered treason and in which the concept of enemies of the state is gaining real traction. When someone has been categorized as such there is no area of their life that is off-limits.

Moreover, this situation comes at a time when the clamor against perceived left-wing tendencies — which can be roughly translated as a lack of loyalty to the Jewish people, its state and its army — is at deafening, frightening levels. It’s not just NGOs and left-wing activists who have found themselves in the crosshairs of the Right over their perceived traitorous tendencies — theaters, educational institutions and even the medical profession have all been subject to the same sequence of public excoriation followed by attempted silencing.

And that is how we come to hear of a private wedding which is threatened with a political protest because of the couple’s perceived lack of loyalty to the state and its military. The fact that almost no one is surprised at this sequence of events, and furthermore that Glick has not been dismissed as a crank and Shikli seems to have emerged from the incident with his reputation quite unsullied, tells you much about where this society has arrived, and where it is heading.

As my colleague Noam Sheizaf pointed out on this site a few days ago, “in a state governed by law, the police investigates crimes rather than people. At this moment, the logic in Israel is the exact opposite — the Right is investigating people.” So it is that the government — and its “civilian” stooges — are in our offices, in our cars, in our private online conversations and are now, apparently, aiming for our bedrooms. They’ll be in our heads next — and in yours, too.