The Israeli Broadcast Authority and the Israeli Supreme Court knew in advance what the reaction would be to a radio advert reading out the names of children killed in Gaza, and that’s why they banned it. By doing so they’ve taken a bit of our freedom. 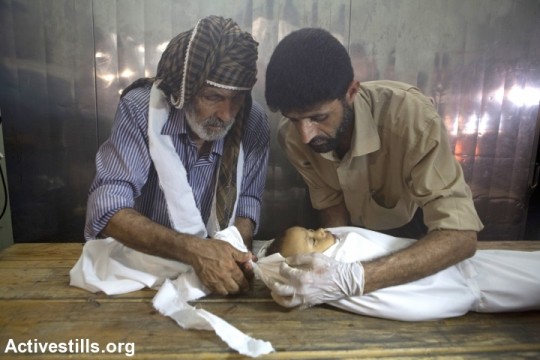 Palestinians prepare the body of a baby in Kamal Edwan Hospital’s morgue after an attack on Beit Hanoun elementary school killed at least 17 people, Jabalyia, Gaza Strip, July 24. The school was being used as a shelter by 800 people at the time (photo: Anne Paq/Activestills)

Some facts should not be permitted to be broadcast in public. Merely hearing them is dangerous: It could cause people to have thoughts, doubts or compassion. If this danger comes to pass, what would become of us?

What sort of thoughts would enter the minds of those who hear even a few names from that forbidden list? It’s difficult to estimate. As a matter of fact, it is a complete mystery as to how humans would respond upon hearing the names of foreign children, Palestinian children – more than 500 under the age of 15 – who were killed in Gaza in the past few weeks. This mystery is part of what makes us free. When that mystery is solved in advance by the government, a part of what allows the public to be free is taken away. It is no longer a mystery, it is propaganda.

Without being able to hear for ourselves, we have no choice but to rely on the thoughts of those who appointed themselves the deciders of what we can and cannot hear: the lawyers of the Israeli Broadcast Authority (IBA), the attorney general of Israel and a few Supreme Court judges, who disqualified the broadcast of a B’Tselem radio advert [Hebrew]:

In other words, stating the facts creates guilt. Psychologists would perhaps call this the “return of the repressed.”

When the attorney general listened to the names, thoughts entered his mind: “The advert in question voices a message and a stand, and not just mere facts – in light of its content, how it is delivered and read quietly and slowly…” That is to say, perhaps a cheerful reading of the dead children’s names, in a manner that would not provoke forbidden thoughts, is, in fact, the appropriate solution? 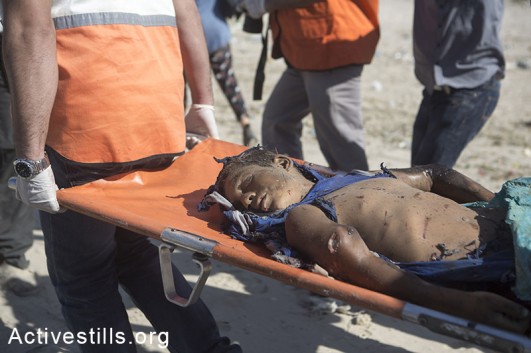 A Palestinian child who was killed by an Israeli airstrike on the Gaza harbour is carried away by paramedics, Gaza city, July 16, 2014. Four children were killed during the attack as they played on the beach. (photo: Activestills)

In conclusion, Supreme Court Judge Elyakim Rubinstein says: “This is the place to clarify in a lucid voice first that, as human beings, we frown upon the death of innocents in Gaza, let alone children.”

Later on the court decision follows: “Israel is aware, and must be aware, of the distress of innocents on the other side – children included… as an attorney general myself, I have dealt with that quite often.”

It is interesting to listen to the “lucid” voice of a supreme court judge, the coherent and deciding voice that rules whether other tones – sober, complex, relaxing or agitating – will be heard, or not; the voice that itself admits that for years and years it has held a position devoid of repression or guilt, since it is never our fault and there must never ever be any doubt, contemplation or empathy on the matter.

That’s the reality we live in nowadays, and here is the bottom line: There is no one in Israel who will enable the reading of the names of Siraj, Nidal, Sarah or Amal. More than anything, this is an appalling and heartbreaking statement on the current state of affairs.

And we, whither shall we go?

Hagai El-Ad is the CEO of B’Tselem.

Related:
Gaza deaths aren’t worth a mention in leading Israeli paper
How will Gaza’s children carry their scars into adulthood?
WATCH: Children long for kites, not bombs, in Gaza skies