On prisoners, guards and misunderstandings. 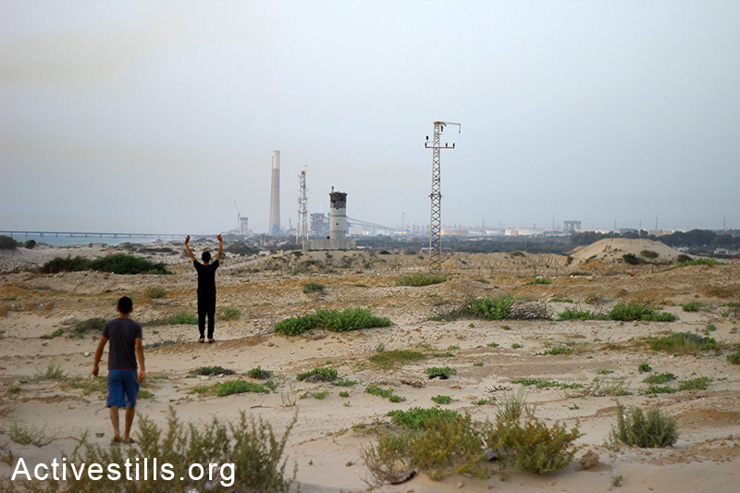 Young Palestinians wave at an Israeli military tower in the ‘No-go zone’ area, near the border close to the Palestinian village of As Siafa in north Gaza, May 30, 2014. The Israeli army classified broad swaths of land adjacent to the Green Line, in which soldiers are allowed to open fire at anybody who enters, even if the person poses no threat. The Israeli power plant in Ashkelon is seen at the back

Even today, when rockets are exploding above the city I love most in the world, even when we rush into our apartment building’s stairwell and march downstairs along with the neighbors to the bicycle room that has been turned into a makeshift bomb shelter. Even now, I oppose this military operation wholeheartedly. The sight of the IAF’s attack helicopters crossing the sky, going south along the Tel Aviv coastline does not fill me with pride or gratitude – it horrifies and depresses me.

Even after operations such as Defensive Shield, Summer Rains, Cast Lead, Pillar of Defense and the Second Lebanon War, I still cannot get used to the unshakable consensus that takes hold of the Israeli public. I would still like to believe that this whole thing is a misunderstanding, and that if my own people would only give some more thought to the reality in the occupied territories, they would change their mind overnight. I want to believe that they don’t fully grasp the nature of the occupation, which is why they are so enraged by whatever the Palestinians do. This mindset leads to yet another violent Israeli response, which only paves the way for the next escalation. I do not know if this line of thinking is more naïve or more patronizing on my part, but what other explanations are there?

I keep running into Israelis who don’t know, for example, that we still control Allenby Bridge (which connects the West Bank to Jordan), and with it each entrance and exit of a every Palestinian into the West Bank; or they don’t know that the IDF still operates in Area A, supposedly under the full control of the Palestinian Authority; or that there is no 3G network in the West Bank because Israel doesn’t permit the Palestinian cellular providers to use the necessary frequencies; or that we imprison of Palestinians hundreds without trial for months and years; or any other factual, undeniable aspect of the occupation. If all this is unknown, then perhaps this is all just a big misunderstanding.

Most of the time I try to correct misconceptions and argue over such details, but if I had to explain the whole thing briefly, I would use the following metaphor: we’ve built two giant prisons. Let’s call them “West Bank Prison” and “Gaza Prison.” The West Bank Prison is similar to a minimum security facility, where prisoners get to run their own affairs as long as they behave. They are entitled to vacations from time to time and once a year they are even taken to the beach. Some lucky people get below-minimum-wage jobs in nearby factories, and when you consider the low prices in the prison canteen, it’s actually not a bad deal.

Gaza, on the other hand, is a maximum security facility. It is difficult to visit and impossible to leave. We allow in essential food, water and electricity so that the prisoners don’t die. Apart from that, we don’t really care about them – that is unless they approach the prison fence; or the “forbidden” perimeter, where anyone who wanders too close is shot; or if they try to throw something over the fence.

Indeed, they occasionally throw some homemade bombs made of things they’ve managed to smuggle into prison, and when they fall on our heads it really is unpleasant. So we send our snipers to the watchtowers built around the prison and shoot them like fish in a barrel until they calm down. And when they finally do calm down, we cease firing because we are not the kind of bastards who shoot people for fun.

In the last five years, the minimum security prison has been pretty calm, but there have been some riots in the maximum security one, which we have managed to control with the usual routine. Still, even when both facilities were calm, we obviously didn’t open the prison doors. Rather, we made the walls higher and decreased the size of the prison yard; after all, we needed some of it for ourselves.

When we are asked why don’t we free the prisoners we explain that they refused to sign their parole papers because they don’t like our terms. For example, they don’t like that the release will be gradual, lasting 10 years or more, or that they will have to allow us to keep all kinds of items that we took from them when they were first locked up.

In addition, the head of prison intelligence compiled a report, which unequivocally states that every prisoner, each and every one of them, hates the prison guards. And as long as that is the case there is really nothing to discuss as far as we are concerned.

The prison facilities now hold a total of 3.5 million people – an entire nation – all sentenced to life. Under such conditions, prisoners can turn to desperate measures, such as suicide missions, digging long tunnels or swimming miles and storming our tanks with their old rifles. Often it ends up with a killing that looks like it was taken from some old video game. On the rare occasions that they do kill one of the guards, they hold celebrations in the prison and we become even more sickened by them. This, of course, also causes us to fear the day that they find a way to break down the walls.

I believe the prisoners will never love those who have locked them up, but there is a good chance that their children might be able to forgive – if for no other reason than a desire to move on with their lives. Naturally, there is only one way for this healing process to begin, and it has nothing to do with the fish and the barrel approach.

Hold your fire. Tear down the prison walls. Set the prisoners free.

Originally posted on my Hebrew blog at Local Call.

Related:
Live blog: Escalation in Gaza – July 2014
Dispatch from Gaza: You can never be emotionally ready
[ARCHIVE – 2012]: Gaza operation will be declared a success, until the next war