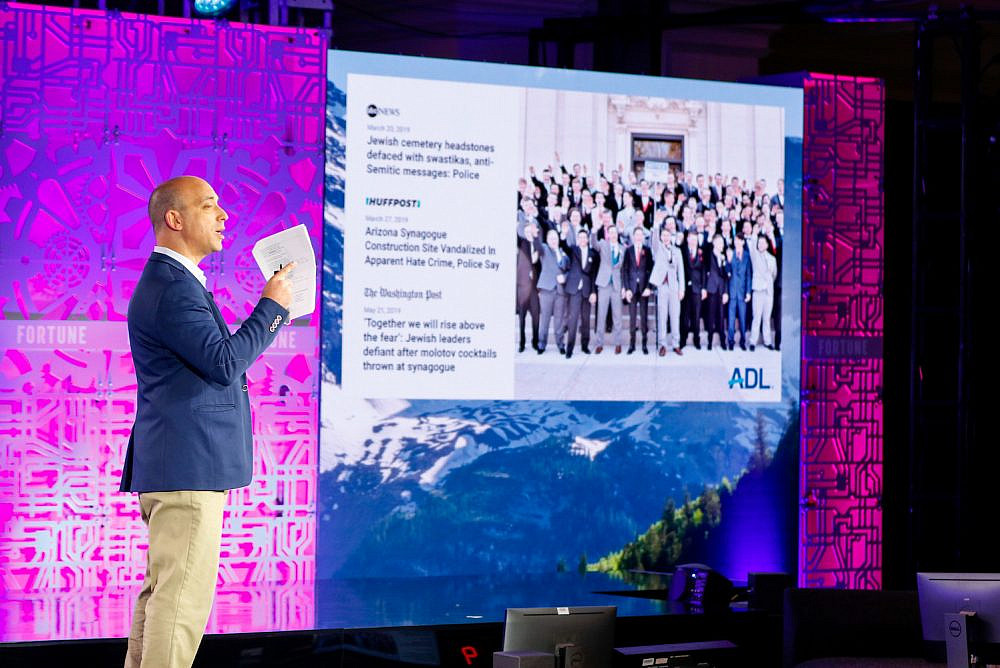 In late 2017, while working at the Anti-Defamation League (ADL), I posted from my personal Facebook account criticizing the Israeli army for arresting Palestinian teenager Ahed Tamimi in her village of Nabi Saleh in the occupied West Bank. I believed it was wrong, I wrote, for a minor to be held in a military prison. Shortly after, someone called my supervisor and requested I be fired.

In the end, my supervisor simply told me to be more “thoughtful” about what I shared online. But it was clear that my politics on Palestine were under the microscope because of the organization I worked for. Within a few weeks, I had decided to quit the organization anyway.

I joined the ADL in May 2016 as the Director of Development for Missouri, Eastern Kansas, and Southern Illinois, after receiving a Masters from Brandeis in Near Eastern and Judaic Studies. I saw this job as an opportunity to use my knowledge of the region to promote greater understanding of the reality in Israel-Palestine and to help reduce Islamophobia in the Jewish community. Perhaps naively, I hadn’t considered that my political beliefs — I am an anti-Zionist — would preclude any possibility of advancement for me in an organization that brands itself as working to “secure justice and fair treatment to all.”

Our regional office was a small staff of three, including me. Initially, it was enthralling work, which fed my hope that someday I would rise through the ranks and have a chance to facilitate big conversations about Jewish/Muslim relations, diversity in the Jewish community, and BDS, as well as steer policy change.

My primary duty was to fundraise for the organization by building relationships with major prospects and community stakeholders (such as Israeli and U.S. embassies, Jewish Federations, the American Jewish Committee, the National Council of Jewish Women, and local synagogues), and planning events. But I often had the chance to observe first responses to hate crimes, and work on addressing some of the heinous antisemitic events of 2016-17: from a spate of bomb threats called in to Jewish organizations, to a series of Jewish cemetery desecrations, to the white nationalist riots in Charlottesville which resulted in Heather Heyer’s murder.

I also got to sit in on anti-bias training workshops that our team conducted for various groups, among them police officers from around the St. Louis Metropolitan area. At first, I was deeply impressed with the level of knowledge and facilitation shown by the volunteers and staff who made the training possible. But gradually, I began to notice that the police officers for whom we led anti-bias training were completely disengaged, and were never held accountable for it. They toured the local Holocaust museum in St. Louis’s Jewish Federation building, guided by a wonderful docent, and all the while they fiddled on their phones. 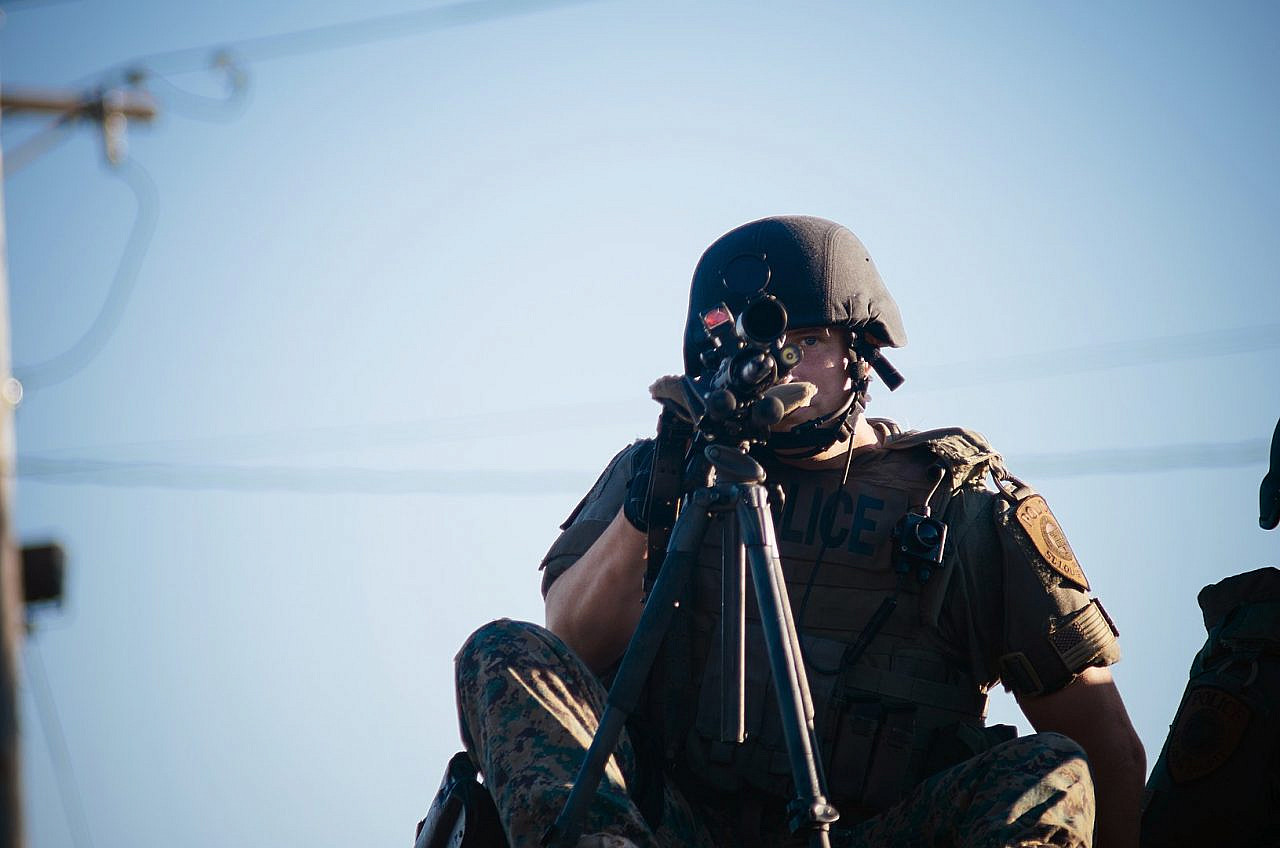 A sharpshooter from St. Louis Police trains his weapon in the direction of the camera at protests in Ferguson, Missouri, August 13, 2014. (Jamelle Bouie/CC BY 2.0)

In defense of the training, it was a solid presentation on how German police collaborated with the Nazis during the Holocaust and how easy it is for police to be coopted into supremacist causes. The problem wasn’t the presentation, it was the police — which is why I was confused that we kept valorizing police officers with our programming and fundraising.

When I spoke to police about the ADL they would often gush about the trip they took to Israel on the organization’s dime — a trip where they learned about counterterrorism and “crowd control.” I felt exceedingly uncomfortable with the program that helped send police to Israel for training, because I knew that among its beneficiaries were one of the most undisciplined and dangerous forces in the United States: the St. Louis Metropolitan Police Department, which was involved in brutally suppressing the Ferguson uprising following the police shooting of Michael Brown in 2014.

Within months of my starting to work there, the ADL’s stance on the matter became clear: namely, that they viewed the St. Louis police as an embattled force being punished for the crimes of one bad apple. But that wasn’t true: I had seen first-hand the total aversion of these police officers to receiving anti-bias training. The things they would say during training sessions were appalling. A common refrain was that they didn’t see the point of being there since the problem was really “Black-on-Black crime.”

Conversations would often devolve into police officers venting about having to interact with Black citizens, or just their general disdain for people who didn’t respect their authority. It wasn’t just a few bad apples: it was the whole system, and we were enabling it, collaborating with it, and giving it a shield to stand behind. The organization continuously partnered with police in the aftermath of extrajudicial shootings; this, to me, was testament to the ADL’s total disregard for the experiences of Black people living in America.

While I believe the ADL does, at times, do valuable work to educate about antisemitism, that work is completely undermined by the organization’s commitment to upholding systems of oppression in Israel and the United States, and by its collaboration with the U.S. police and the Israeli government — including maintaining a policy preventing the organization and its staff from acknowledging anything to do with Palestine, or the fact that Palestinians are living under Israeli military occupation.

During a training session in 2017 on facilitating anti-bias workshops, we spent much more time talking about anti-Zionism than antisemitism or racism. As part of the training we were given the chance to talk to Ken Jacobson, the National Deputy Director of the ADL. I asked what our stance was on the occupied territories, since it never came up during training; I was told by Jacobson that we don’t call the territories occupied, we just call it the West Bank. 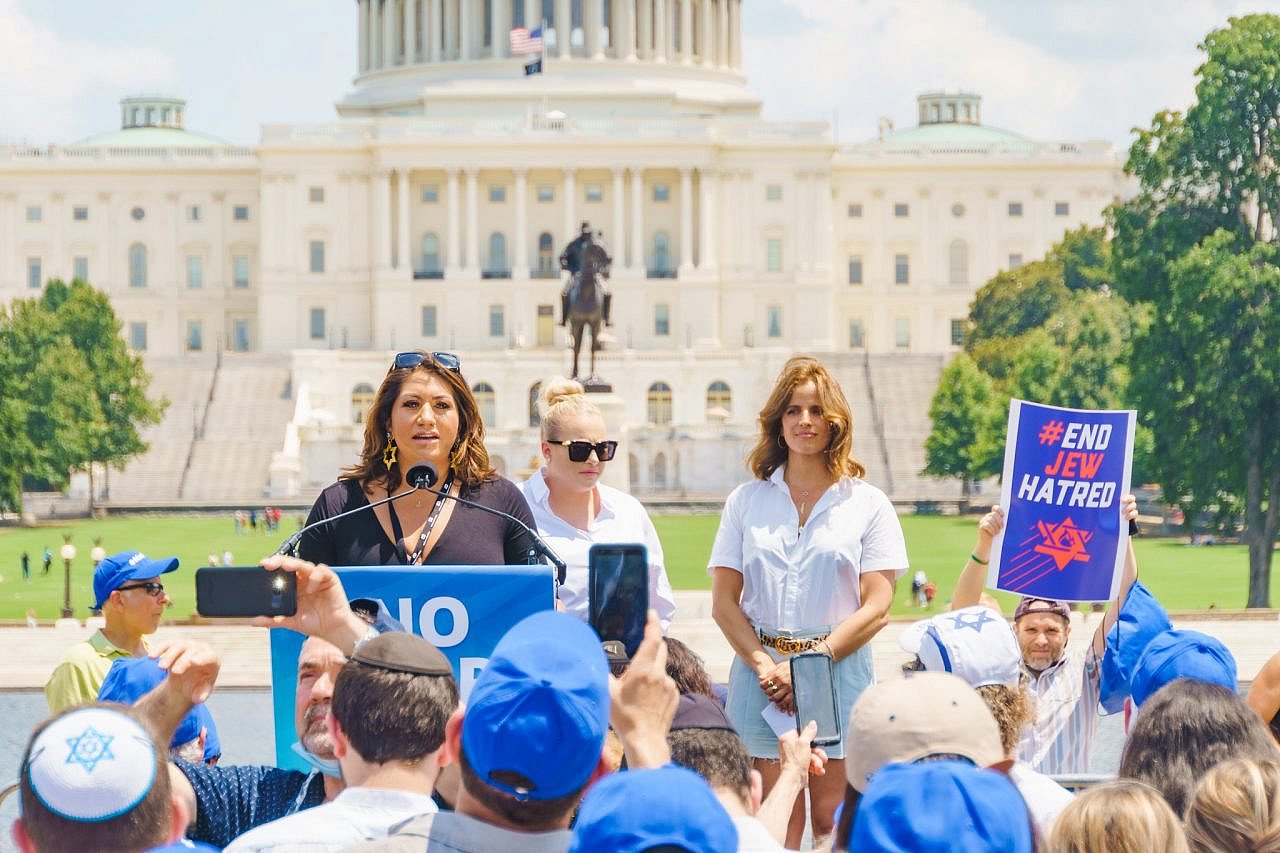 I decided it was time to go in late December 2017, when we threw a brunch and award party for the police of St. Louis honoring two officers who had, in fact, solved a hate crime. My objection was that we invited Jeffrey Roorda, a former politician, ex-police officer, and current executive director and business manager of the St. Louis Police Officers Association, part of the Fraternal Order of Police.

Roorda is well-known in St. Louis for being an unequivocal white supremacist, for antagonizing the family of  Michael Brown and the entire Ferguson community, and for sharing conspiracy theories about President Obama. I didn’t want to be in the same room as him, let alone invite him to an event I was planning. When I voiced this concern to my direct supervisor I was told that we simply had to invite him, and that it would look bad if we didn’t.

That was it for me. I found another job and left in early 2018, feeling ashamed at not having put my foot down. I never shared publicly why I quit until I tweeted about it last month, and I was never offered an exit interview where I might have told my employer about my reasons for leaving. And what it comes down to is the fact that the ADL is more than willing to throw Black Americans and Palestinians under the bus in order to secure funding from right-wing donors. Until this changes, the organization cannot in good conscience profess to be committed to “justice and fair treatment to all.”

Tasha Kaminsky is a non-profit professional and published author. She co-founded Ashreinu STL and MaTovu STL, two Jewish non-profits in the heart of St. Louis. She holds a Masters from Brandeis in Near Eastern and Judaic Studies, and two degrees from Florida State University in Creative Writing and Religion. Twitter: @tashakaminsky.