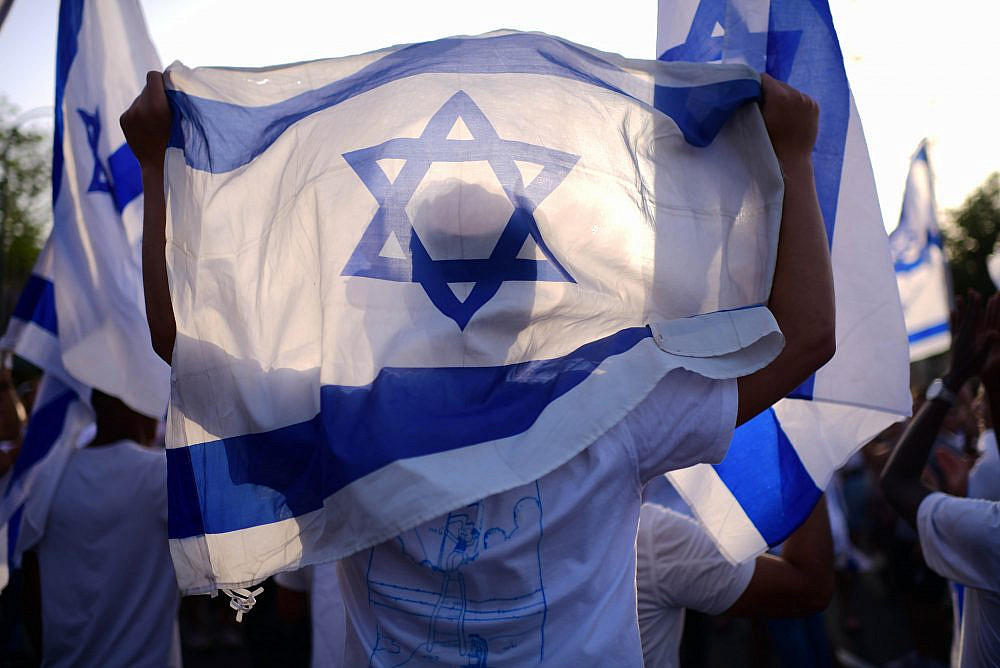 Hundreds of young Jews dance with Israeli flags as they march through the mixed town of Jaffa, in celebration of Jerusalem Day, May 29, 2022. (Tomer Neuberg/Flash90)

Some years ago, I was in a ritual committee meeting at the synagogue where I serve as the rabbi. A congregant was dissatisfied with a sermon I had given about Israel (the contents of which I no longer remember), and told me: “Rabbi, please don’t talk about Israel from the pulpit. And make sure its pro-Israel.”

Since then, I have largely heeded the first part of that congregant’s advice. But recently, while delivering a Yom Kippur sermon at the same synagogue exploring the relationship between antisemitism and oppression, I broke this rule.

My sermon considered three very different contexts of antisemitism. First is the classical European case where antisemitism was an extension, or expression, of animus toward Jews who lived in a state of oppression or persecution of varying degrees. There, antisemitism was a natural byproduct of social, and in some cases legal, persecution.

The second is the United States, where antisemitic acts still exist, even though Jews in America are not an oppressed people. There is no legal or social barrier that prevents Jews from living their lives freely in the country as Jews, and if such resistance should exist, one has legal recourse to bring the perpetrator to justice. In Shaare Tefila Congregation v. Cobb (1987), for example, the Supreme Court determined that vandalizing a synagogue with antisemitic graffiti constituted racial discrimination under the law.

Still, Jews can certainly be victimized by antisemitic acts: the 2018 massacre at the Tree of Life synagogue in Pittsburgh is the most egregious example. More recent visible instances were the antisemitic remarks made by hip hop artist Kanye West and basketball player Kyrie Irving. Nevertheless, antisemitic acts are not the same as social tolerance for antisemitism: when West and Irving espoused such bigotry, they were summarily punished at great expense to both of them. The real problem would have been if there were no consequences at all. 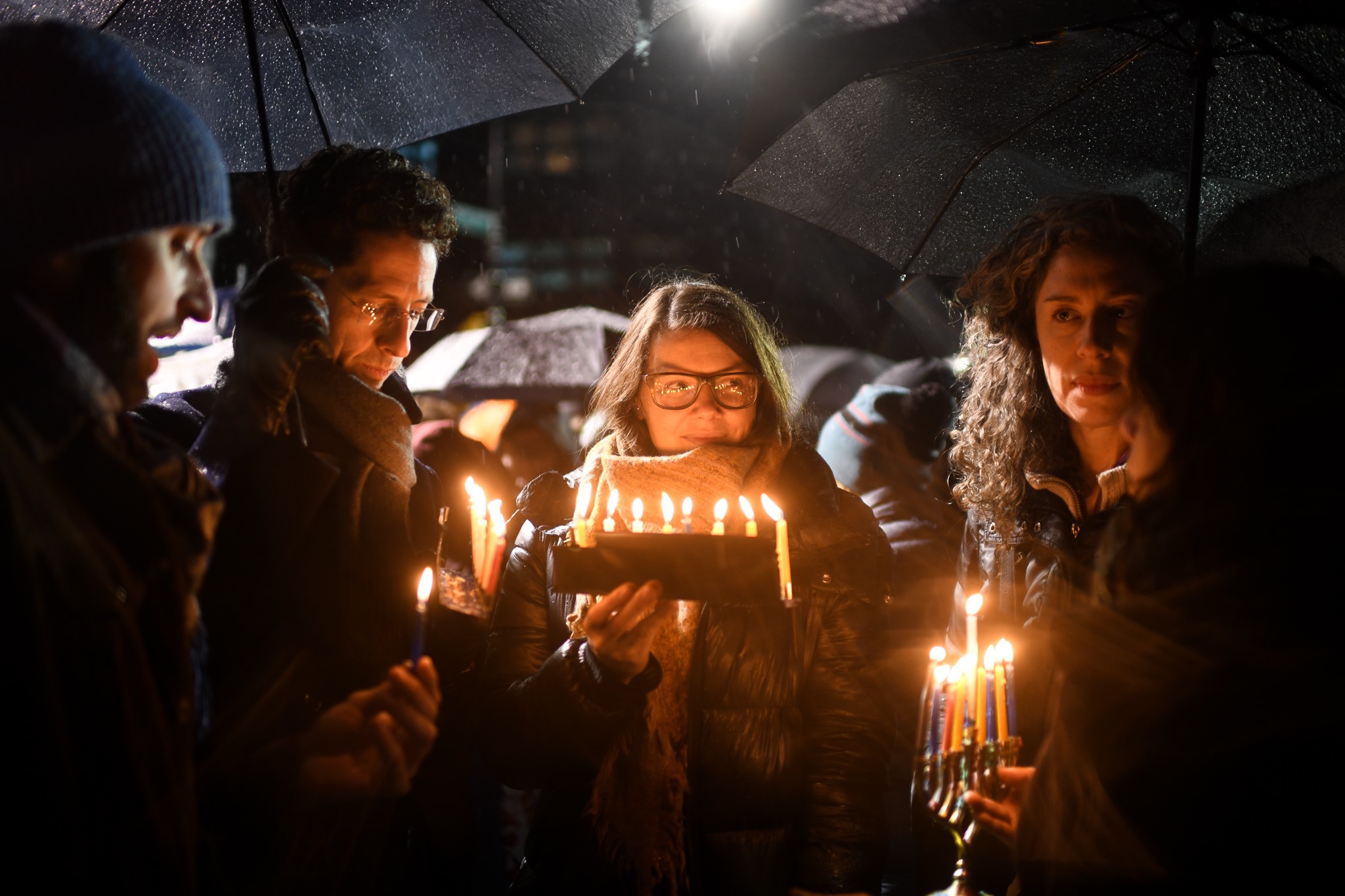 Jewish Americans light Hanukkah candles during a vigil that followed a wave of antisemitic attacks on the Jewish community in New York, December 30, 2019. (Gili Getz)

It was in this context that I reneged on my commitment not to talk about Israel, raising it as the third of my examples. The State of Israel, I said, is currently a place where Jews as a people are not oppressed, and are actually the hegemon limiting the individual and national aspirations of a non-Jewish population. To claim that Palestinians are oppressed by Israel is not a provocative claim but a descriptive one, which raises a string of important questions.

Are acts against that state, in which a Jewish hegemon oppresses a non-Jewish population, antisemitic? Is it necessarily an antisemitic act, for example, if a Palestinian throws rocks at Israeli forces to protest against the occupation? Can it be compared to Cossacks ransacking a Jewish village in the Pale of Settlement under the auspices of the local government? The Palestinian stone-thrower may be engaged in illegal activity; his act may even, under certain definitions, constitute terrorism. But is it antisemitic?

This was the question I posed to my congregation. But mentioning Israel was apparently a mistake. Had I simply used the two examples of Europe and America, many of my listeners might have been sympathetic to my remarks. But adding the Israeli case caused many to simply stop listening. This is not because they disagreed with the description, although some may have; it seemed to be because I talked about Israel at all. These congregants are highly intelligent, engaged, and mostly liberal. But the subject of Israel feels increasingly like forbidden territory.

These two very limited examples — the congregant who requested that I don’t talk about Israel, and the congregants who switched off as soon as I did — illustrate a shift in the American-Jewish attitude toward Israel, especially among liberal Jews. Don’t get me wrong, American Jews are still predominantly very pro-Israel; one need only witness the Israel Day Parade in Manhattan or other American cities to get a glimpse of that. But for many liberal Jews, the well-trodden expressions of support for Israel — “the most moral army in the world,” “the only democracy in the Middle East,” “no partner for peace” — are becoming less convincing as the reality on the ground makes them increasingly implausible. 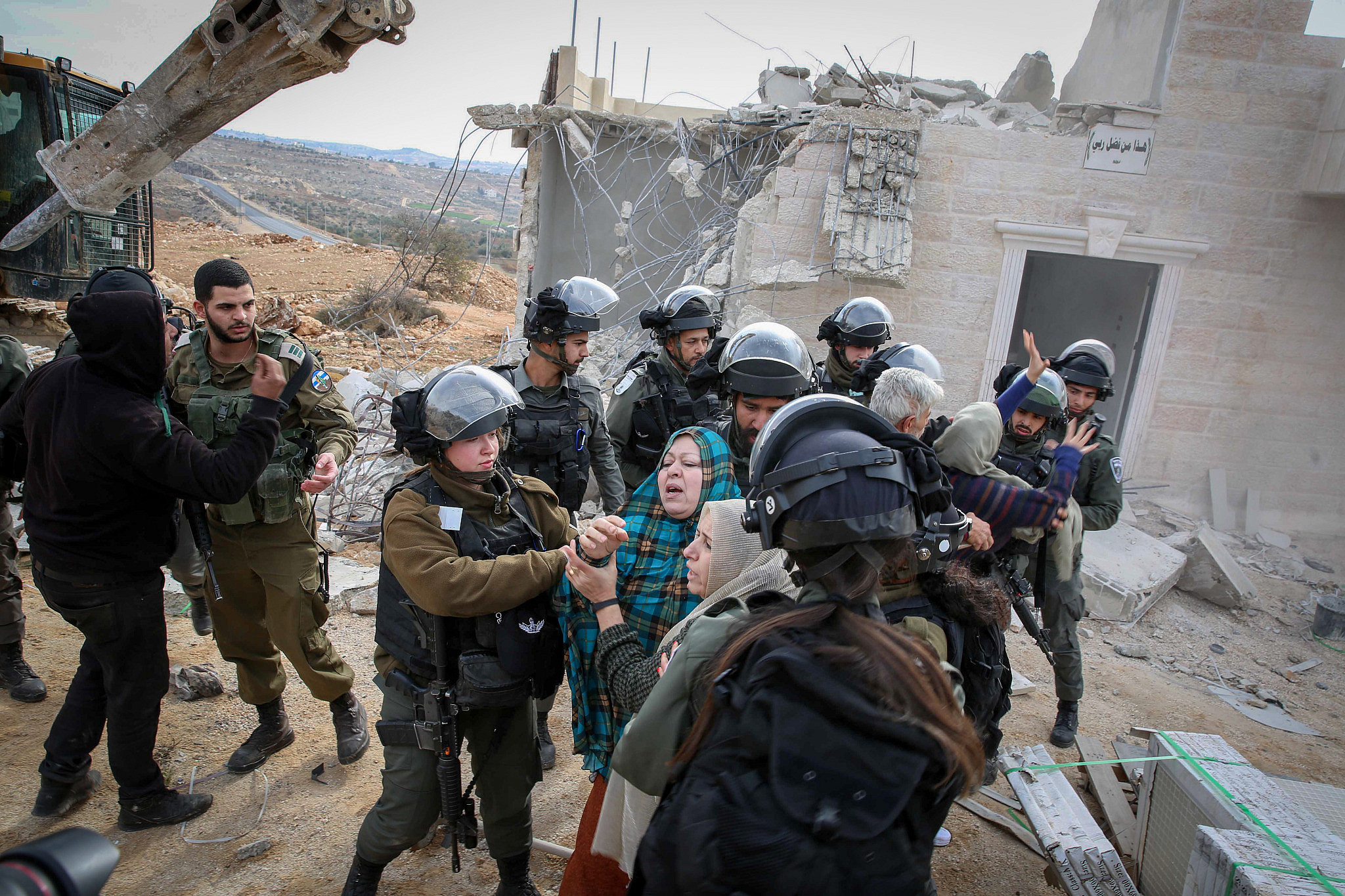 Israeli forces stand guard as Palestinian women react to the demolition of their home, located within the “Area C” of the West Bank, in the city of Hebron, December 28, 2021. (Wisam Hashlamoun/Flash90)

Israeli soldiers are killing Palestinian children on a regular basis. Earlier this year, the Israeli army beat Omar As’ad, a 78-year-old Palestinian-American man, and left him to die outside in the cold. An Israeli soldier fatally shot Shireen Abu Akleh, also an American citizen, in the Jenin Refugee Camp, even as she was wearing a clearly-marked press vest. Every week we see new scenes of settler takeover in the Sheikh Jarrah and Silwan neighborhoods of Jerusalem, house demolitions across the occupied West Bank, or land confiscation in Area C and the Negev/Naqab. And now, Kahanists like Itamar Ben Gvir are the face of the new Israeli government, when as recently as 1988 they would have been banned from even running in an election.

To be sure, the pro-Israelists in America have answers for all of these. Increasingly, though, their answers mostly serve to retain the base rather than expand it. Because while liberal American Jews largely remain proud of Israel, they are also committed to liberal values and are wary of being forced to choose between the two. With Israel solidifying its status as an illiberal state, many liberal American Jews are facing a major dilemma.

Growing numbers of mostly young American Jews are speaking out strongly against Israel — not merely its politics but also the systemic discrimination upon which it was founded. Some have joined openly anti-Zionist, non-Jewish groups such as Students for Justice in Palestine. Others are choosing more Jewish-centric frameworks such as Jewish Voice for Peace, which explicitly supports BDS, and IfNotNow, which does not. Others still prefer to remain in the liberal Zionist camp, joining organizations such as T’ruah or J Street.

From where I stand, however, there appears to be a large segment of American Jewry, identifying as both liberal and Zionist, that is uncomfortable voicing the familiar defenses of Israel, but whose Zionist commitments prevent them from offering a stronger critique. Part of this is due to the efforts of groups like the Anti-Defamation League (ADL) to equate all such criticisms with antisemitism — an equation implying that any Jewish opposition to Israel automatically makes one a self-hating Jew, or, as two Jewish authors put it, an “Un-Jew.” As a result, what appears to be happening is a movement toward silence.

The dissemblance of a myth

In his book on silence and denial, “The Elephant in the Room,” Israeli sociologist Evyatar Zerubavel writes: “According to many psychologists, denial stems from our need to avoid pain. When awareness of something particularly distressful threatens our psychological well-being, we often activate inner floodgates that block the disturbing information from entering our consciousness.” From this perspective, the dilemma among many liberal Zionists today is not so much about confusion as it is about pain. 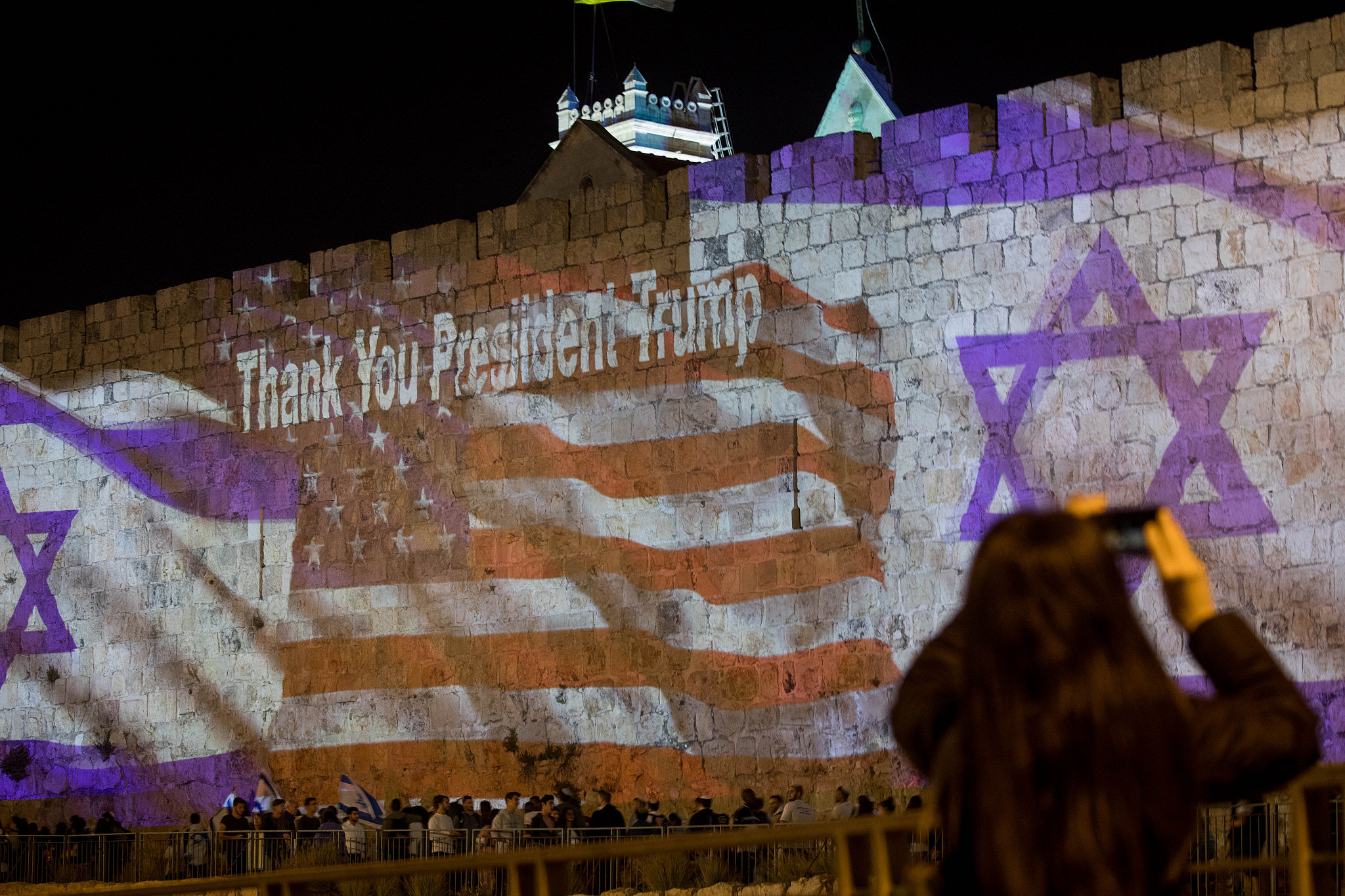 The Israeli and the American flags are screened on the walls of Jerusalem’s Old City, ahead of the opening of the US embassy in Jerusalem, May 13, 2018. (Yontan Sindel/Flash90)

This pain derives from watching the dissemblance of a myth. Many of us were raised to believe that Israel, defined as the “Jewish” state, would always embody the “Jewish” values that we were taught through a liberal lens. Thus, when the reality perforates those myths, when justifications no longer assuage what one sees on their TV screen or mobile phone, when antisemitism is weaponized to defend against egregious acts of state violence, “inner floodgates” are triggered to “prevent information from entering our consciousness.”

What, then, does one do? I see at least two options. The first is to change the subject: “Let’s focus on American Jews, there is much work to be done here.” This suggestion can take the form of a liberal or progressive agenda on Jewish issues, or on national issues — what old country Ashkenazi Jews used to call doikayt (Yiddish for “hereness”).

There is, though, a less constructive impulse within this path: to divert the Zionism conversation away from defending the Zionist state to talking about liberal Zionist values: what we want Zionism to be as opposed to what Zionism actually is. It reminds me of how early apocalypticism talked incessantly about the “Jerusalem in heaven,” because the Jerusalem on earth was such a disaster; it amounts to a kind of “Jerusalem in heaven Zionism.”

There is nothing inherently wrong with that conversation; in fact, it is important. But not if it is a substitute for acknowledging what Zionism is in practice today, in the form of a nation-state in 2022 that has been oppressing another population for over half a century, if not more. Likewise, one can explore the vicissitudes of Zionism as an ideology, explore paths not taken, and hope for something different. But on the ground it is, and has been for a long time, the ideology that is causing the suffering of innocent people — and that cannot, or should not, be denied.

The second option is denial — not denying what is happening, but simply not wanting to know. And this is the choice many liberal American Jews are increasingly making — in part, perhaps, to shield themselves from the pain of disappointment, and in part to protect deeply held convictions in the promise of Zionism. For many American Jews in middle age and beyond, their beloved Zionism is at an inflection point. I can sympathize with that. But silence as denial is not an answer. 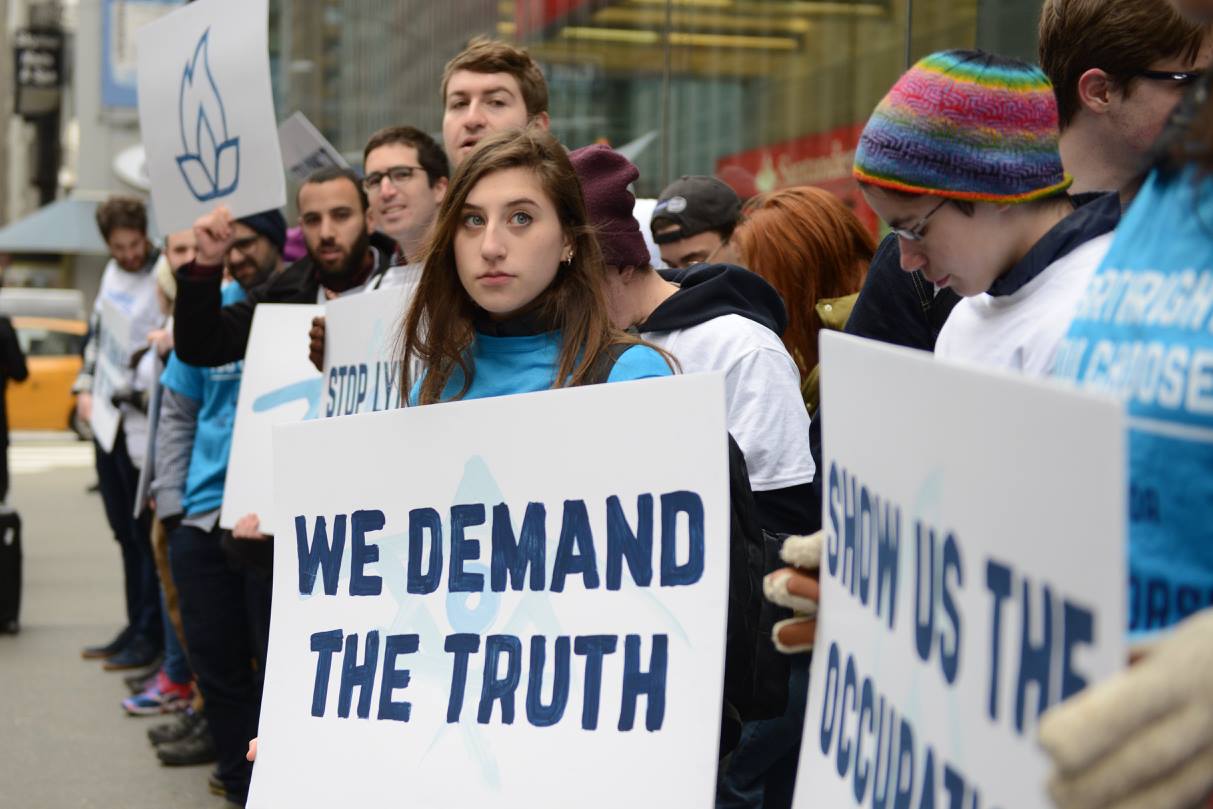 The choice “not to know” is, in some sense, an acknowledgment that the hasbara responses to the conflict no longer make sense given present realities. The choice “not to know” is a way to protect liberal values in the face of Israel’s illiberal turn. Israelis cannot choose “not to know.” For them it is the country they have to live in. But American Jews have a choice. And increasingly, in light of the irreconcilability between their beloved Israel and their equally beloved liberalism, they choose not to know about the former to protect their belief in the values they cherish, and the state that has increasingly abandoned those values.

In his famous essay on racism, “The Evil of Indifference,” the American rabbi Abraham Joshua Heschel railed against whites in the American South who simply chose “not to know” about the racist laws to which their Black neighbors were subjected, as if that excluded them from responsibility. On the contrary, he argued: “some are guilty, but all are responsible.” The solution of denial is one way to avoid responsibility. But as Heschel taught us, that is no solution at all.

Shaul Magid is Professor of Jewish Studies at Dartmouth College and Kogod Senior Research Fellow at the Shalom Hartman Institute of North America. His latest book is “Meir Kahane: The Public Life and Political Thought of an American Jewish Radical” with Princeton University Press.