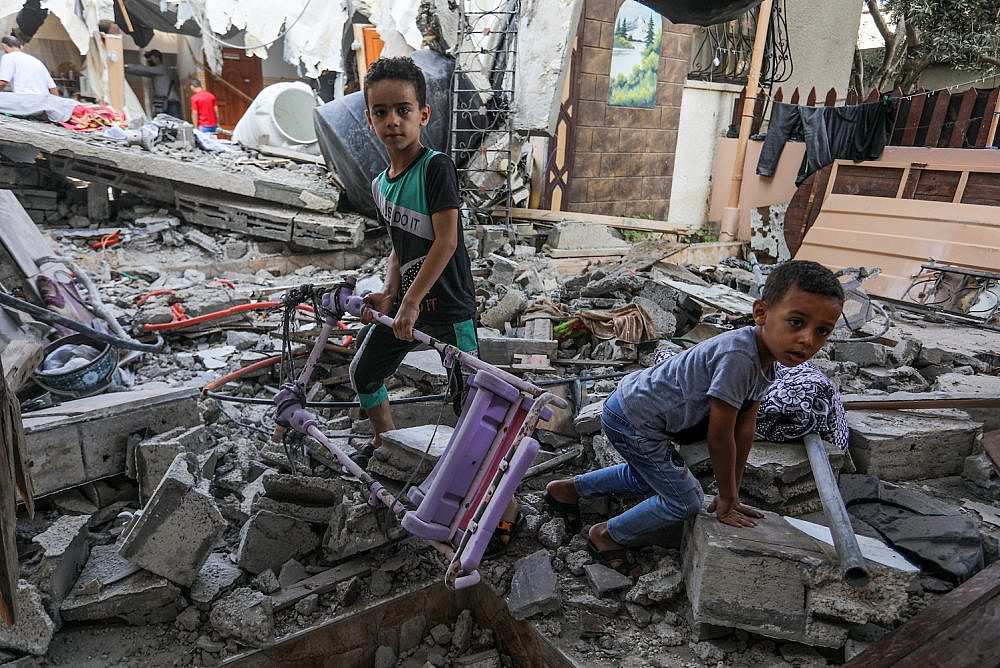 Three days after Israel launched its latest military operation in Gaza, it still remains unclear what the hell the point of all this was.

With the announcement of an Egyptian-brokered ceasefire on Sunday night, Israeli analysts have been quick to deem caretaker Prime Minister Yair Lapid and Defense Minister Benny Gantz’s “harmonious” campaign a success. After violently arresting Bassam al-Saadi, a senior leader of the Islamic Jihad movement’s branch in the occupied West Bank, the Israeli army put border communities around Gaza on lockdown for nearly half a week in preparation of an alleged retaliatory attack. It eventually began launching airstrikes in the strip, which were met with volleys of rocket fire from militants. The escalations have ended with 44 Palestinians killed, including 15 children, and over 350 more wounded.

Lapid and Gantz, who reportedly launched the operation without the necessary consent of the security cabinet, have both won praise for the relatively low price Israelis paid in this latest round of violence, as well as for the swift and “precise” strikes on top Islamic Jihad commanders inside the strip. Aside from a number of protests by Palestinians and Israeli leftists across the country, the Israeli public, which greatly benefits from the status quo of endless siege and colonial rule, saluted an onslaught that seems to have changed very little on the ground.

Yet despite the accolades for Israel’s leaders, the stories coming out of Gaza — where two million Palestinians, many of them refugees from the Nakba, live in untenable conditions — were nearly too much to bear. Images spread of charred children’s bodies, demolished buildings, and hundreds of people fleeing their homes carrying their most valuable possessions on their backs. Gazan residents, many of whom are still rebuilding after Israel’s last war on the strip in May 2021, will be left to bury the dead and treat the wounded, with more violence in the future all but guaranteed.

The three-day assault echoed another Israeli operation in 2019: the assassination of Islamic Jihad commander Baha Abu al-Ata, who was killed while asleep in his home. Back then, I wrote that former Prime Minister Benjamin Netanyahu had initiated the killing as an “escape route from his political or legal quagmires.” This time around, it was Lapid who seemed to be searching for a victory image, perhaps in an attempt to burnish his hawkish credentials ahead of the Israeli elections. The result was an unprovoked offensive against a civilian population whose lives are largely dictated by the whims of the Israeli security apparatus.

This is the way Israel’s military and political establishment prefers to run things. Gaza, in many ways, has become the most extreme version of Israel’s bantustanization project in Palestine. Rather than having to manage millions of Palestinians directly, the logic of Israeli apartheid demands that the various enclaves in the occupied territories remain somewhat self-governing, while maintaining the overarching power to control and intervene in their affairs for Israel’s interests.

As a result, whereas in the West Bank, Israel has outsourced much of its security duties to an enfeebled and authoritarian Palestinian Authority, in Gaza, a nearly-hermetically sealed territory is controlled by the similarly-authoritarian Hamas.

Counterintuitive as it may sound, Israel does not actually want to topple Hamas; it needs it to uphold the status quo, continually thwarting the chance for Palestinian unification while preventing an even more radical group, like Islamic Jihad, from taking its place. And while Israel will fight these Palestinian groups to keep them in line, its system of control will ultimately remain in place.

But should he be elected in November, Lapid will likely learn the same hard lesson as his predecessors: that every military “victory” in Gaza is a Pyrrhic one, and that Israel, for all its grandstanding, has no long-term strategy for the strip that does not include ceaseless war and bloodshed. There has never been, nor will there ever be, an Israeli military solution for Gaza; the killing of Palestinian fighters and commanders only opens the doors for new generations of hardened militants ready to take up the mantle of armed struggle.

More importantly, there is no reason to believe that an entire people living under the brutality of a 15-year siege, and over seven decades of dispossession, will suddenly decide to give in to their colonial overlords. Anything less than the dismantling of these oppressive structures is merely violent tinkering with a dangerous status quo.