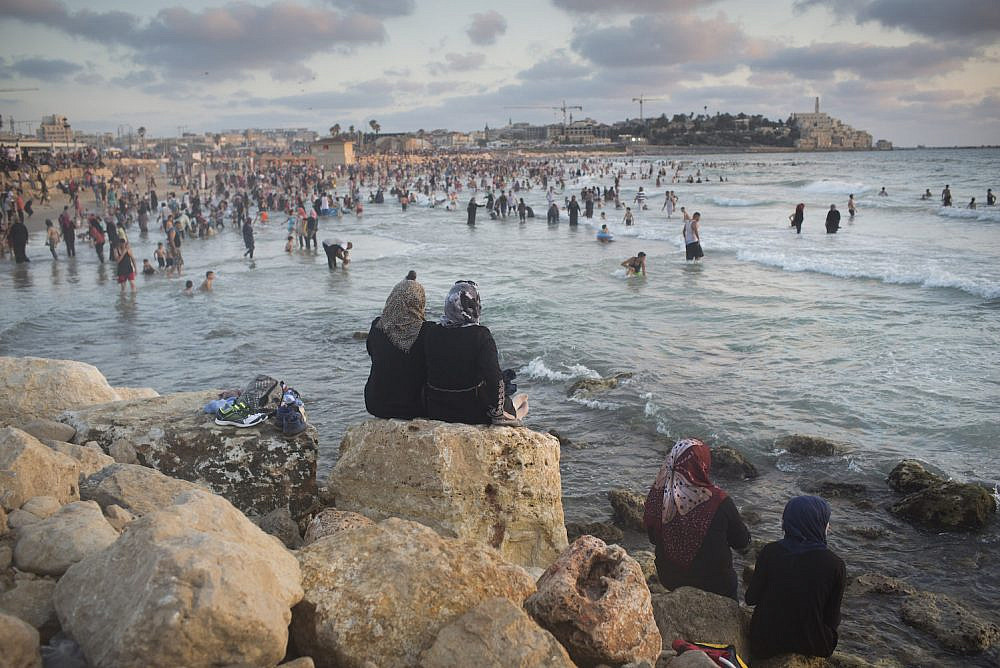 Palestinians, many of whom came from the West Bank, sit near the Mediterranean Sea during the last day of the Eid al-Fitr holiday as the sun sets in Jaffa, July 19, 2015. (Oren Ziv)

Britain’s Education Secretary Nadhim Zahawi is either totally unaware of the oppressive system of rule under which Palestinians in Israel-Palestine are living, or he simply doesn’t care. Last week, following a summit to tackle antisemitism on university campuses, Zahawi announced that any students in the U.K. heard chanting the pro-Palestinian slogan “From the river to the sea Palestine will be free” should be referred to the police. Reducing the chant to a Hamas rallying cry, the education secretary claimed that the slogan “promot[es] the murder of Jewish people.”

Zahawi’s comments represent the latest move to silence speech critical of Israel in the U.K. After proscribing Hamas as a terror organization in its entirety late last year — in a move analysts see as counterproductive to Britain’s own foreign policy in the region — the government is preparing to bring forward a bill to outlaw the Boycott, Divestment and Sanctions (BDS) campaign in support of Palestinian rights. Meanwhile, government pressure on universities to adopt the International Holocaust Remembrance Alliance (IHRA) definition of antisemitism continues to generate new threats to pro-Palestine speech on British campuses.

This is by no means the first time the slogan has come under fire, though it is perhaps the first case of direct government intervention on the matter. In late 2018, for example, CNN fired Marc Lamont Hill, an African-American author and activist, after comments he made at a UN plenary on the International Day of Solidarity with the Palestinian People, which included calling for “a free Palestine from the river to the sea.” The remarks drew immediate censure from pro-Israel groups, with the Anti-Defamation League asserting that those who chant this slogan are “calling for an end to the State of Israel.”

It is regrettable, though by now entirely unsurprising, that governments and major news corporations are far more concerned by slogans than by the oppressive reality on the ground in Israel-Palestine. At the same time as these debates are playing out abroad, Israel continues to consolidate its domination over the entire territory between the river and the sea, where Palestinians do not enjoy the same rights as Jews. In this context, Zahawi’s comments reveal far more about the U.K.’s acquiescence to Israeli apartheid than they do about the motives of those calling for Palestinian liberation.

Ever since Palestinians began using the slogan as far back as the 1960s (long before Hamas was established), pro-Israel groups have denounced it as implying either the destruction of Israel, the destruction of the Jewish people, or both. Such assertions are often followed by a question to the effect of: “Why aren’t they calling for freedom alongside Israel?” Calling for a free Palestine from the river to the sea, it is argued, must therefore reflect a desire to “throw the Jews into the sea.” 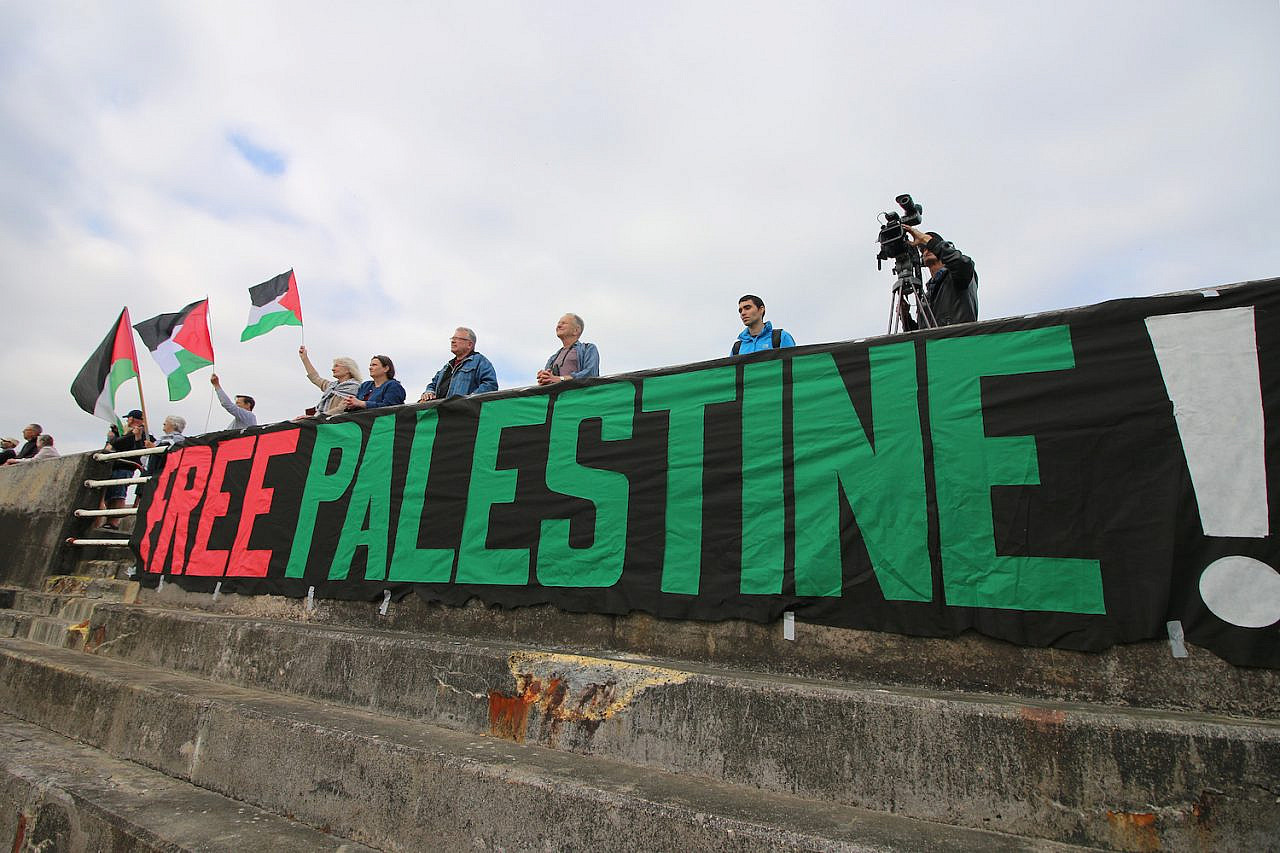 Activists greet one of the Scandinavian ‘Freedom Flotilla’ ships as it arrives on the Brighton coast, southern Britain, June 5, 2018. (Ahmad Al-Bazz/Activestills.org)

Such arguments are deeply steeped in the settler colonial logic of elimination at the heart of Zionism, which insists on seeing Jewish and Palestinian liberation as a zero-sum game. When this logic is reflected back onto Palestinians, it is considered inevitable that their freedom will necessarily come at the expense of Jewish safety. But why is it so hard to imagine a reality in which Palestinians and Jews are both free and equal between the river and the sea?

“When we call for a free Palestine from the river to the sea,” wrote Palestinian commentator Yousef Munayyer last year, “it is precisely the existing system of domination that we seek to end.” The system to which he refers is based, at its core, on Israel’s unceasing quest to minimize Palestinian presence on the land while expanding Jewish presence: bantustanization of Palestinian communities on the one hand, and Judaization of the territory on the other. Under such a system, Jewish lives are inherently worth more than Palestinian lives, and no Palestinian — even those afforded the relative privilege of Israeli citizenship — can ever truly be free.

It is enough to reflect back on events from this month alone to illustrate this simple reality. Israel began 2022 by escalating its campaign to displace and dispossess Bedouin citizens in the Negev/Naqab, many of whom are already refugees from the Nakba in 1948. A new Jewish National Fund afforestation project aimed to confiscate more land from the village of Sa’wa al-Atrash, representing the latest stage in the process of concentrating Bedouin in smaller and smaller areas to enable the expansion of new Jewish communities on their land.

Nearly half of the 200,000 Naqab Bedouin live in villages that the state refuses to recognize, meaning they are not provided with basic infrastructure and services like healthcare and education. A resident of the unrecognized village of Atir, which a few years ago faced the threat of a similar afforestation project, said at the time that it was as if “a plant brought over from Europe has more rights than a non-Jew who was born and raised here.” A few kilometers to the west, the unrecognized Bedouin village of al-Araqib was recently demolished for the 196th time. 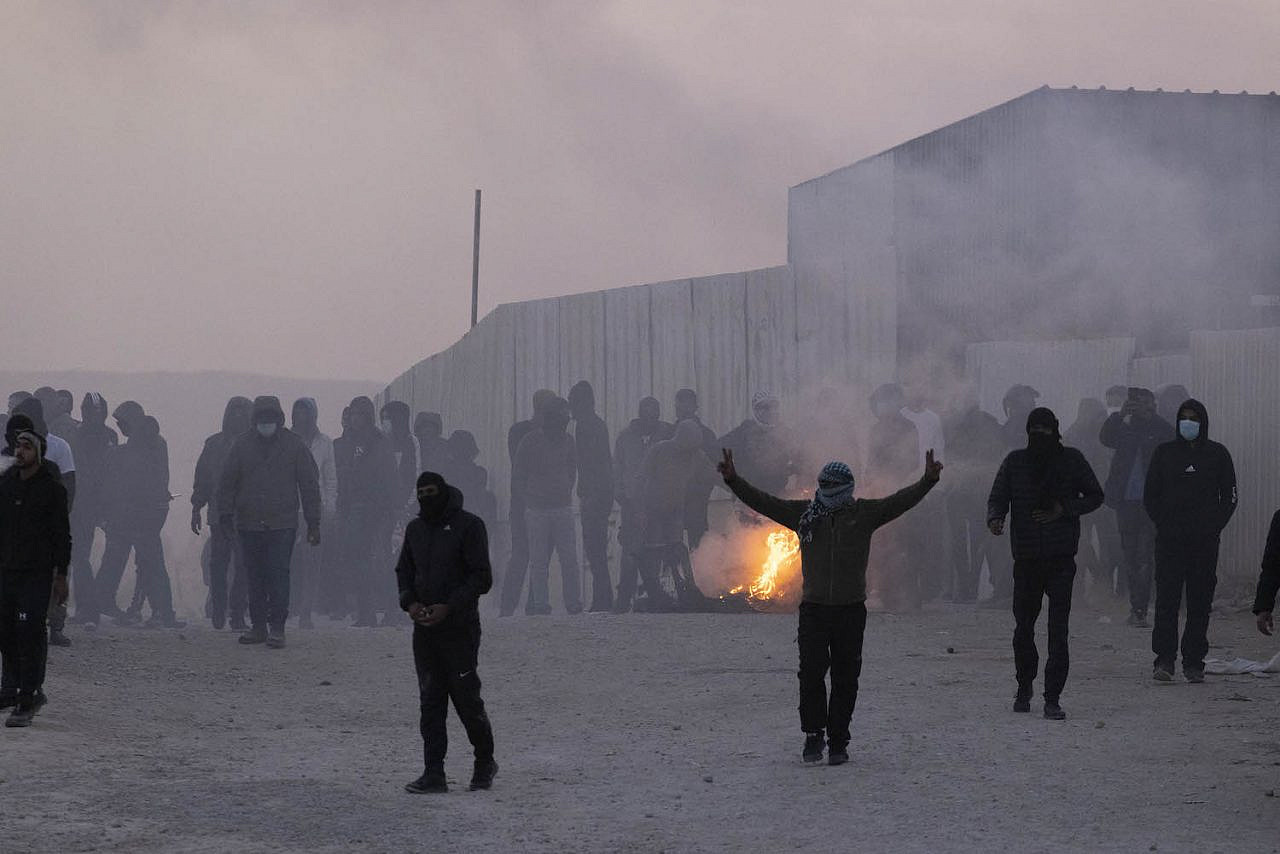 Palestinian Bedouin in the Naqab/Negev, protest on Road 31 near the village of Sawa al-Atrash, against the an afforestation plan carried out by the Jewish National Fund (JNF), January 13, 2022. (Oren Ziv)

If recent weeks have shown that Bedouin communities in the Naqab are worthless in the eyes of the Israeli authorities, they have shown too that in the occupied West Bank, the lives of Palestinians don’t matter at all. How else can you explain the killing by state forces of two elderly Palestinian men who posed no threat to anyone — Haj Suleiman al-Hathaleen in his late 60s, and 80-year-old Omar Abdalmajeed As’ad — since 2022 began?

The utter neglect for human life on display in both cases still can’t fail to astonish. In the former, the driver of a truck contracted to the Israeli police had entered the Palestinian village of Umm al-Khair in the South Hebron Hills to confiscate “illegal” cars; when Hathaleen, a veteran activist against Israel’s military rule, refused to step aside to allow the truck through, the driver drove straight into him, crushing and dragging him underneath the truck for several meters before driving off. Hathaleen was rushed to hospital, spent several days in a coma, and then died from his wounds.

In the latter case, Israeli soldiers arbitrarily stopped As’ad while he was driving home after having played cards with friends in his village of Jiljilya, near Ramallah, on one of the coldest nights of the year. Soldiers reportedly pulled him out of his car, handcuffed, blindfolded, and gagged him, before they removed his jacket and threw him face-down onto the ground. Within a few minutes, As’ad had died of a heart attack.

Meanwhile, in occupied East Jerusalem, Judaization continues apace. Dozens of families in Sheikh Jarrah remain under imminent threat of eviction at the hands of settler organizations with the backing of Israeli courts, in accordance with the Legal and Administrative Matters Law, which enables Jews to reclaim property other Jews owned in East Jerusalem prior to 1948; there is, of course, no equivalent law enabling Palestinian refugees to reclaim property in West Jerusalem or anywhere else across Israel which they owned before the Nakba. 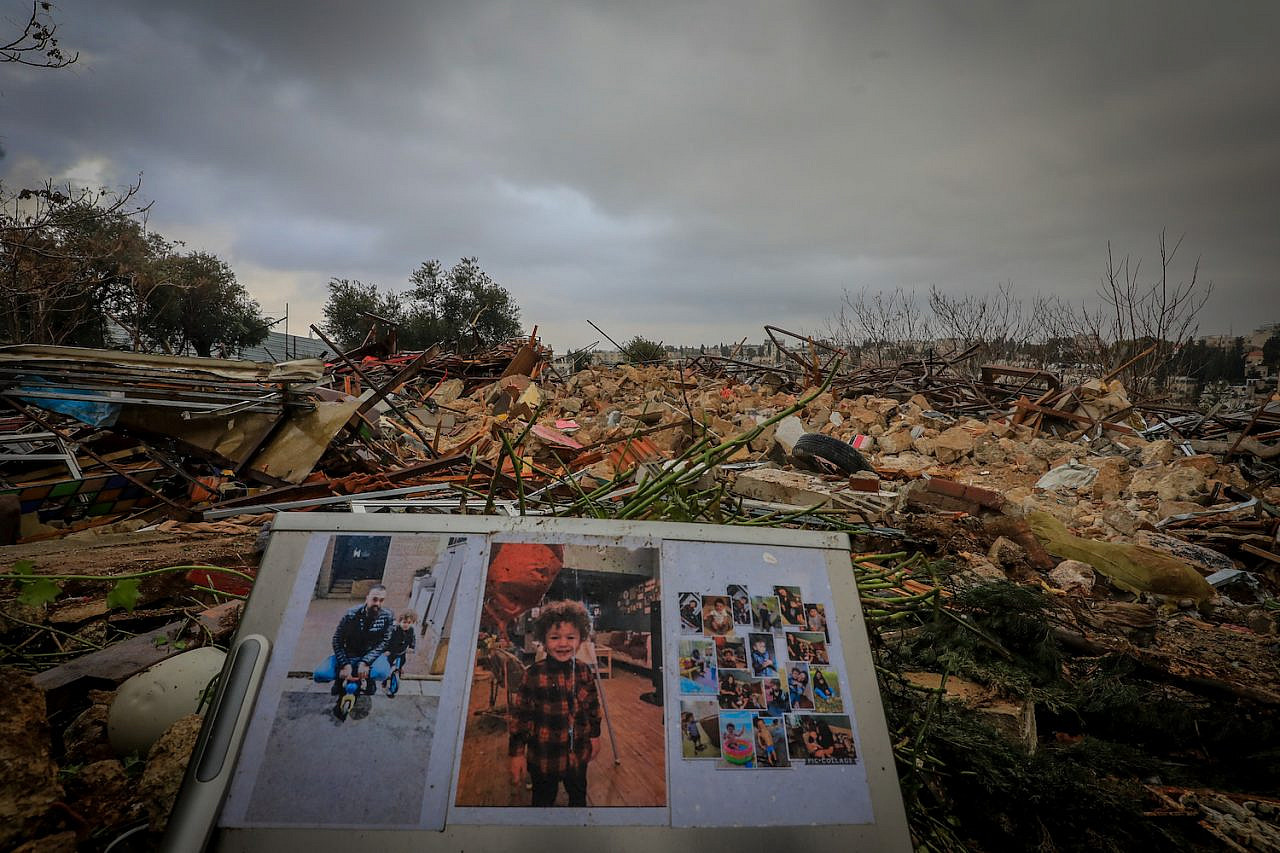 The remains of the Salhiyeh family home that was demolished by Israeli authorities, in the East Jerusalem neighborhood of Sheikh Jarrah, January 19, 2022. (Jamal Awad/Flash90)

The war against Palestinian presence in Sheikh Jarrah is being spearheaded by settler organizations, but it was the Jerusalem Municipality that ordered the expulsion earlier this month of the Salhiyeh family from their home in the neighborhood. At the municipality’s behest, special forces police cut electricity to the house in the dead of night before raiding the property, throwing stun grenades and violently arresting several of the family members and solidarity activists present, and then finally demolishing the home. All this under the cynical pretext of building a school, while empty plots just meters away that could serve that purpose are gifted to Jewish organizations.

This, then, is what Palestinians mean when they call for freedom from the river to the sea. Because in every part of the land between the Mediterranean Sea and the Jordan River, Palestinians are far less free than Jews. And this is a mere snapshot of the reality on the ground over the space of just a few weeks — without even mentioning the unlivable conditions in the besieged Gaza Strip, the most restricted bantustan of all.

Calling for an end to this oppressive system is not antisemitic, and it is not a call for the murder of Jews. Rather, it is an invitation for Palestinians and Jews alike to imagine themselves as free and equal in this land, liberated from the oppressive power relations that prevail today. Rather than criminalizing the slogan, the British government should be working toward this aspirational future. And the first step is recognizing the present reality for what it is.