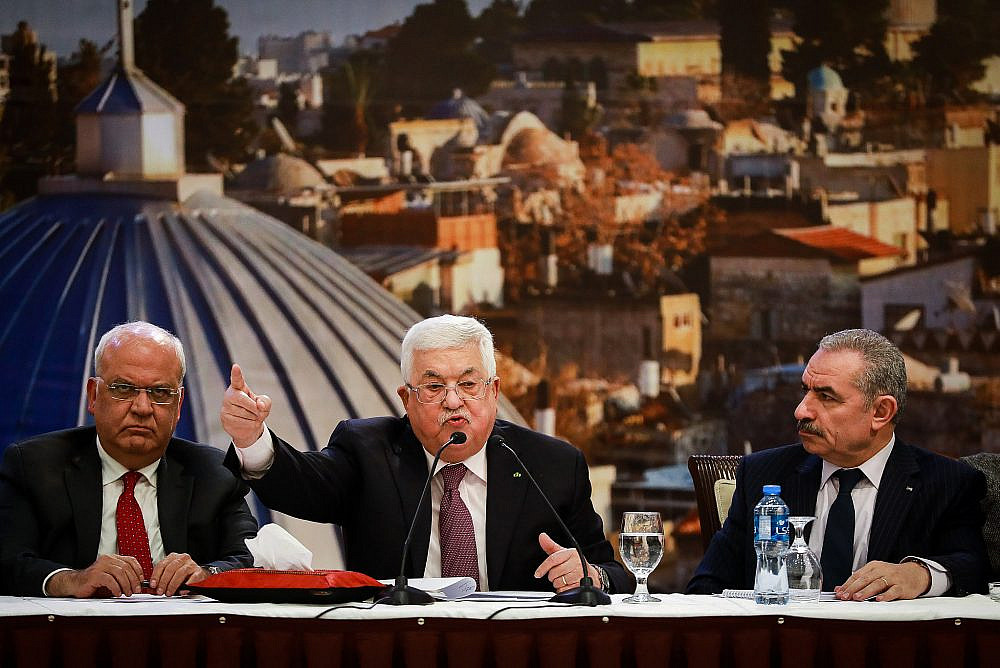 On Tuesday evening, the Middle East Institute hosted the first part of a webinar series titled “The Future of Palestinian Politics under a Biden Administration.” Despite the lively debate between the leading Palestinian thinkers, it was clear within minutes what that future would look like.

As the opening remarks began, news broke that the Palestinian Authority had decided to resume civil and security coordination with Israel, which President Mahmoud Abbas had suspended in May in protest of Israel’s plans to annex parts of the occupied West Bank. Claiming they had received assurances that Israel would adhere to their agreements, the PA’s Civil Affairs Minister Hussein al-Sheikh hailed the move as “a victory for our Palestinian people.”

The irony was not lost on the webinar participants, who shook their heads in dismay as the news was shared. In tragic fashion, the Muqata’a had given evidence in real time to back the speakers’ criticisms of the Palestinian leadership. As Crisis Group analyst Tareq Baconi predicted, the PA’s relief over Joe Biden’s election win had “reignite[d] its misplaced faith in the U.S. to deliver statehood,” compelling it to return to the Oslo arrangements in order to curry favor with the new administration. That “outward-facing gesture,” Baconi noted, would likely come at the expense of efforts to unite the divided Palestinian factions — who were meeting in Cairo for further reconciliation talks that very same day.

As expected, Israel and its supporters have lauded the PA’s decision as a sober correction of a misguided policy. Even well-intentioned observers have welcomed it as a necessary tactic for survival and for easing the hardships on Palestinian families. Anyone tempted to echo this approval, however, should hold their applause. To put it crudely, what is being praised in this moment is the slave’s return to their master, believing that they can talk their way to freedom as they labor with a whip over their head. Despite the fanciful claim of “victory,” the only thing for Palestinians to negotiate is the conditions of their captivity.

A lack of imagination 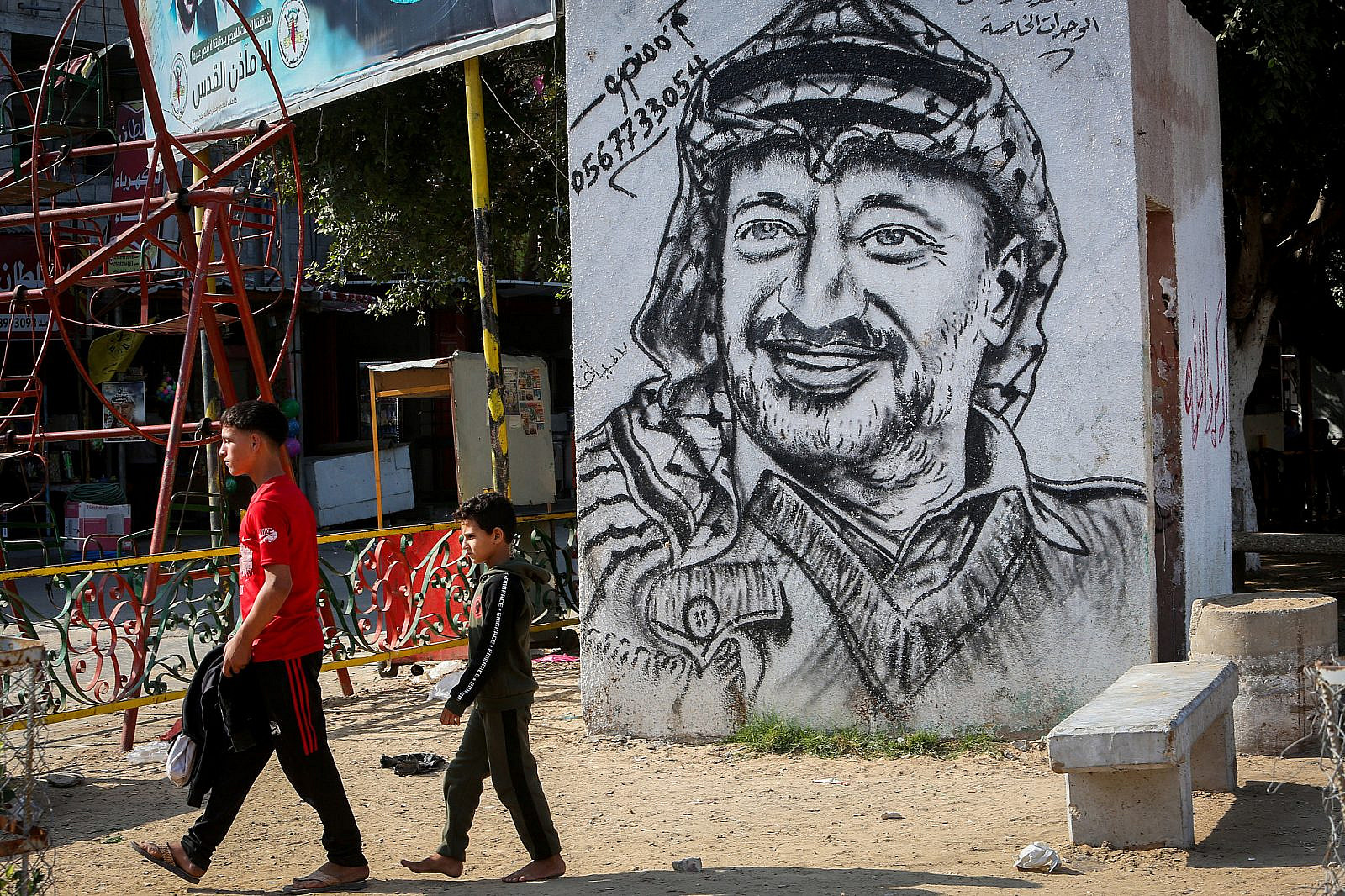 Trapped by a captive market designed by Oslo, the PA’s coffers have depleted in recent years under the malice of the Trump administration, the EU’s pressure to revive negotiations, Israel’s sporadic withholding of tax revenues, and now the coronavirus pandemic. Since severing coordination in May, the PA has slashed the salaries of tens of thousands of public sector employees and has been unable to carry out many basic services, especially those requiring permits, without Israeli approval. Adding salt to the wound, Israel’s agreements with the UAE and Bahrain have shattered the Arab consensus around tying normalization to the Palestinian question. Stripped of friends and funds, the Palestinians had few avenues to pull themselves out of limbo.

Just as fatal, however, has been a complete lack of imagination on the part of the Palestinian political elite. In the months since Abbas “absolved” his government of its Oslo duties, the PA has offered no alternative strategy to unshackle itself from Israeli control or develop Palestinian self-sufficiency. Long devoid of accountability, the PA was uninterested in hosting public debate or acquiring consent to determine if coordination with Israel was in the national interest. Renewed talks between Fatah and Hamas, which promised to organize the first national elections in 14 years, have largely been met with cynicism. Instead, the PA opted for an executive decision to embrace the occupation as it has been for over 25 years: a façade of Palestinian autonomy under Israeli colonial rule.

The PA’s preference for the “status quo ante” is thus as deceitful as it is dangerous. By resubmitting itself to the Oslo Accords, the PA has taken back its dutiful role as a subcontractor of the Israeli occupation. That means aiding the Israeli army’s repressive operations and accepting Israel’s discretion over Palestinian economic activities, with no leverage to stop Israel’s settlement expansion or its abuses of the Palestinian population. This apartheid arrangement existed long before Trump and will remain under Biden, save for the tattered guise of a “peace process.” 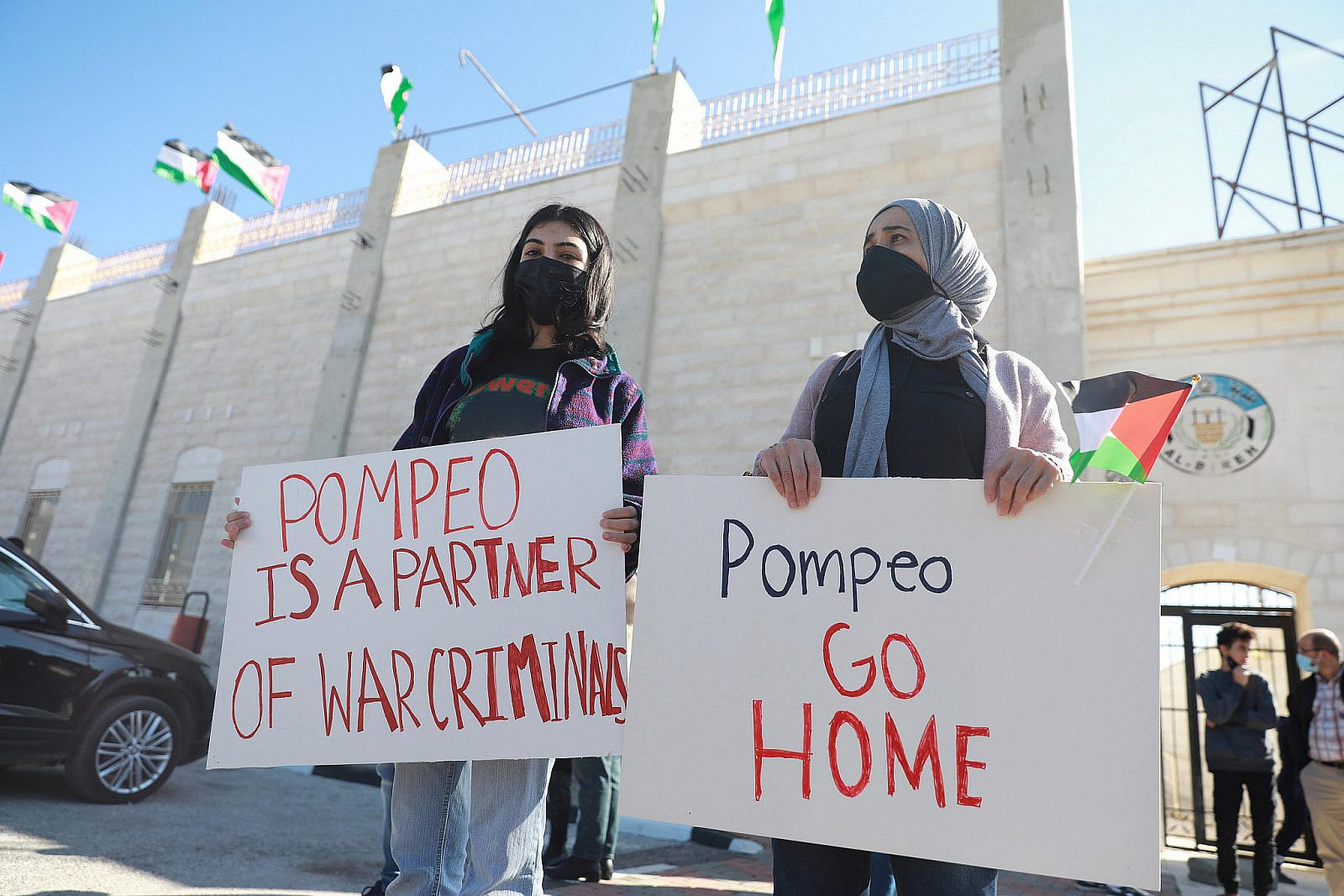 Palestinians protest against the visit of U.S. Secretary of State Mike Pompeo to the Jewish settlement of Psagot near the West Bank city of Al-Bireh, November 18, 2020. (Flash90)

Israel, for its part, has been unabashed about its intentions for the future. This month, the government opened bids to expand the East Jerusalem settlement of Givat Hamatos, and carried out the largest demolition operation in years against the community of Humsa al-Fuqa in the Jordan Valley. During his visit to the settlement of Psagot on Thursday, U.S. State Secretary Mike Pompeo announced mandatory guidelines that will mark imported products made in Area C of the West Bank as “Made in Israel,” and declared that the White House would officially combat the BDS Movement as an “antisemitic” campaign. The master’s contempt for the slave could not be any clearer.

Watching this unfold, it is disheartening for Palestinians to see how far their leaders have reduced themselves to beggars. Once a hallmark of the global anti-colonial struggle, the Palestine Liberation Organization has become little more than a “budget line” in the PA’s nepotistic structures, as legislator Mustafa Barghouti described during the MEI webinar. Its “politics of acquiescence” to Israeli and U.S. diktats, echoed scholar Noura Erakat, has rendered the PLO “stale, and antiquated, and out of touch with the Palestinian street.” With no forum to revive and diversify national politics, the Palestine solidarity movement that has grown over the past decade will also remain rudderless, added businessman Sam Bahour.

This trail of wreckage left by the Palestinian ruling class is tragically symbolized by the legacy of one of its most prominent figures, Saeb Erekat, who died of complications from COVID-19 last week. A longtime chief negotiator, Erekat has been widely memorialized as a passionate advocate of the Palestinian cause and a supportive boss to cohorts of influential experts on Palestine.

For many Palestinians, however, Erekat was a principal architect and stubborn defender of Oslo’s archaic paradigm. Despite his repeated offers of resignation — especially after leaks revealed the PLO’s far-reaching concessions in peace talks — Erekat retained his rank and was even promoted as the organization’s secretary-general. The fact that his partners in government have re-embraced Oslo just days after his death is a harrowing reminder that the project he dedicated his life to will continue to harm his people. 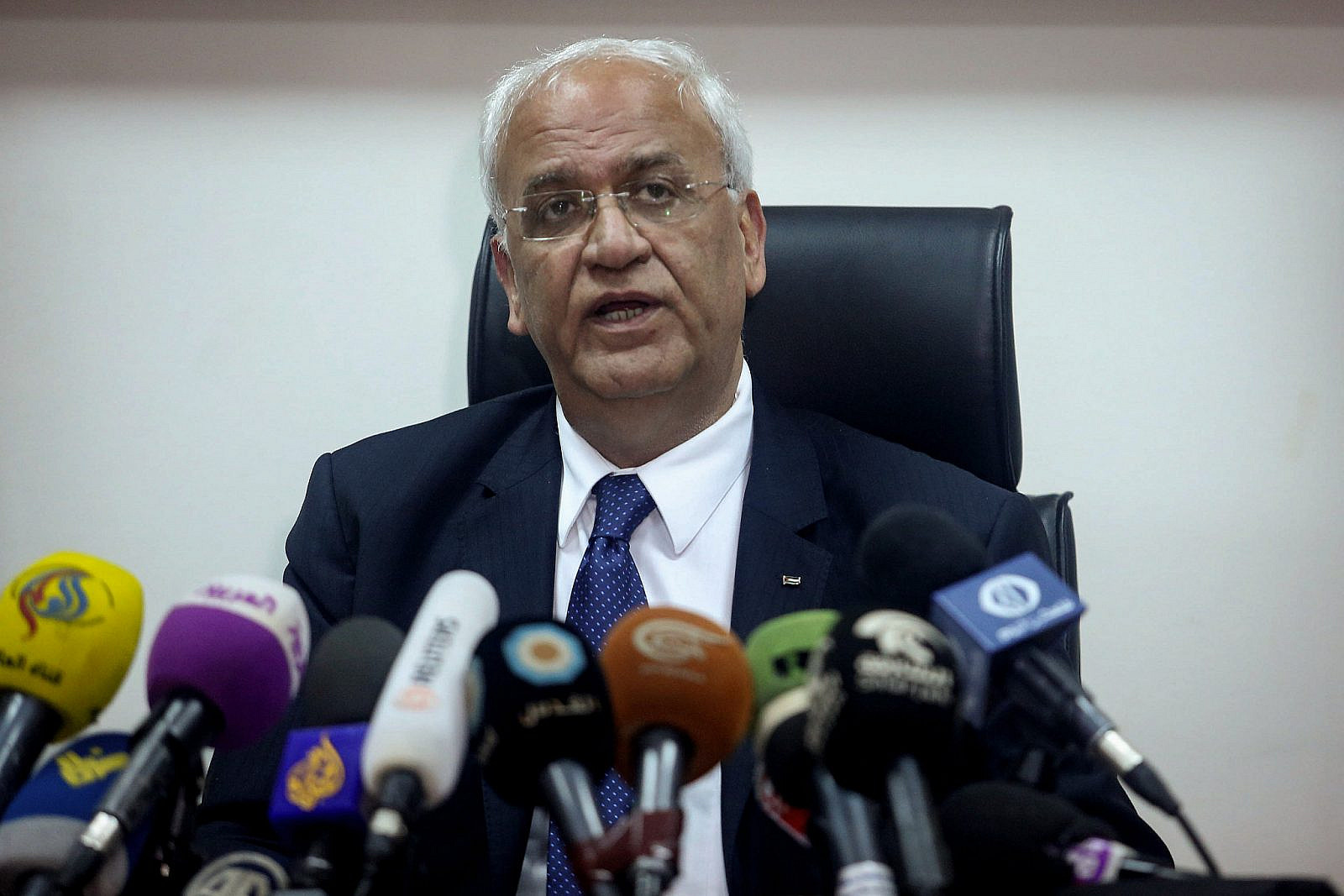 Reckoning with the PLO’s downfall, as well as the disasters its leaders have wrought, does not necessarily entail abandoning its potential for reform. It does, however, make it incumbent on Palestinians and their allies to wage a different kind of politics so long as the PLO remains in its debilitating state. If the Muqata’a is not inclined to devolve its power to its people, the answer is to build power from the ground up. Thankfully, the richest source of Palestinian intellect, debate, and organizing is not in their bygone political elders, but in their vibrant youth, civil society, and grassroots movements. And it is there that the world’s energies and resources should be directed.

Luckily, there are many avenues to do so. A new generation of critical Palestinian activists, thinkers, artists, journalists, educators, and more are rejuvenating the cause, forging connections from inside Israel to the occupied territories to the diaspora.

Independent Arabic and English media outlets are amplifying Palestinian voices to reshape the public discourse. Village committees and activist collectives on the ground are serving as a first line of defense against Israeli settler violence and expansion. Think tanks, advocacy groups, legal centers, and human rights organizations are keeping Palestine on the global agenda. The BDS movement is gaining ever more pace in its pursuit of accountability for Israel’s actions. And progressive allies in the United States are integrating Palestinian rights into their Congressional and grassroots agendas. The PA may have chosen to return to captivity, but that doesn’t mean its people must be shackled by its chains. 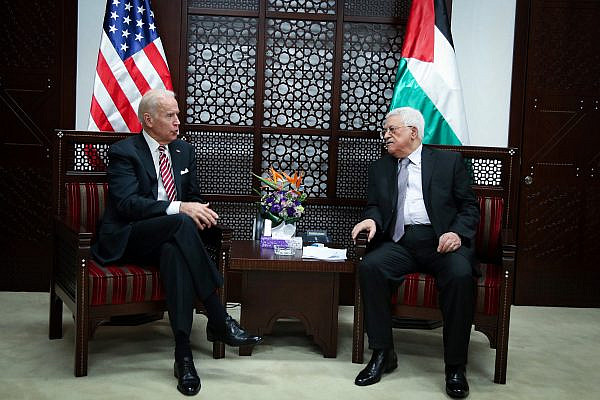 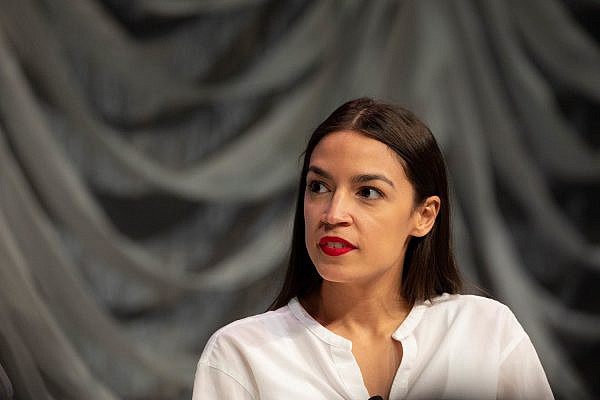