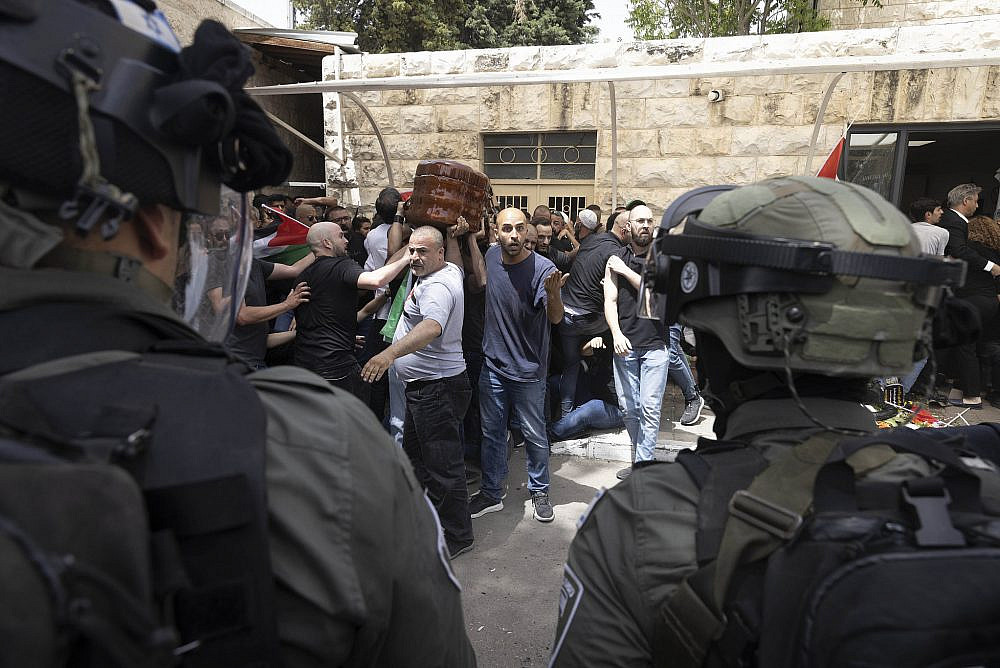 Many of us who either participated in the historic funeral of journalist Shireen Abu Akleh in Jerusalem, or watched it on television and phone screens worldwide, struggled to grasp the depth of shameless, crude, necropolitical violence unleashed that day.

In a shocking display of cruelty, the Israeli police assaulted the pallbearers holding Abu Akleh’s coffin as they tried to carry her body from the hospital to the church where she was to be buried, followed by thousands of Palestinian mourners who had come from across the land. It was a reminder of how, in the eyes of the Israeli regime, Palestinians are unworthy of grieving, even in death.

One particular moment in this violent procession has been carved into our minds. Guevara al-Budeiri, a fellow Palestinian journalist and lifelong friend of Abu Akleh, was covering the police’s attack in the yard of Saint Joseph Hospital in Sheikh Jarrah. Videos released from the scene showed dozens of Israeli police officers invading the hospital, throwing stun grenades and tear gas, pushing mourners back into the building, and injuring patients and visitors, all while causing damage to property. In a shaky voice, al-Budeiri reported: “The coffin did not fall… they are shooting in the hospital yard. We are talking about a hospital, not a battlefield.”

In an attempt to justify the blatant violation of bodily integrity of both the dead and the living, the Jerusalem district police claimed that they were only trying to restore calm in the midst of a “riot” — that is, the mass funeral procession itself. 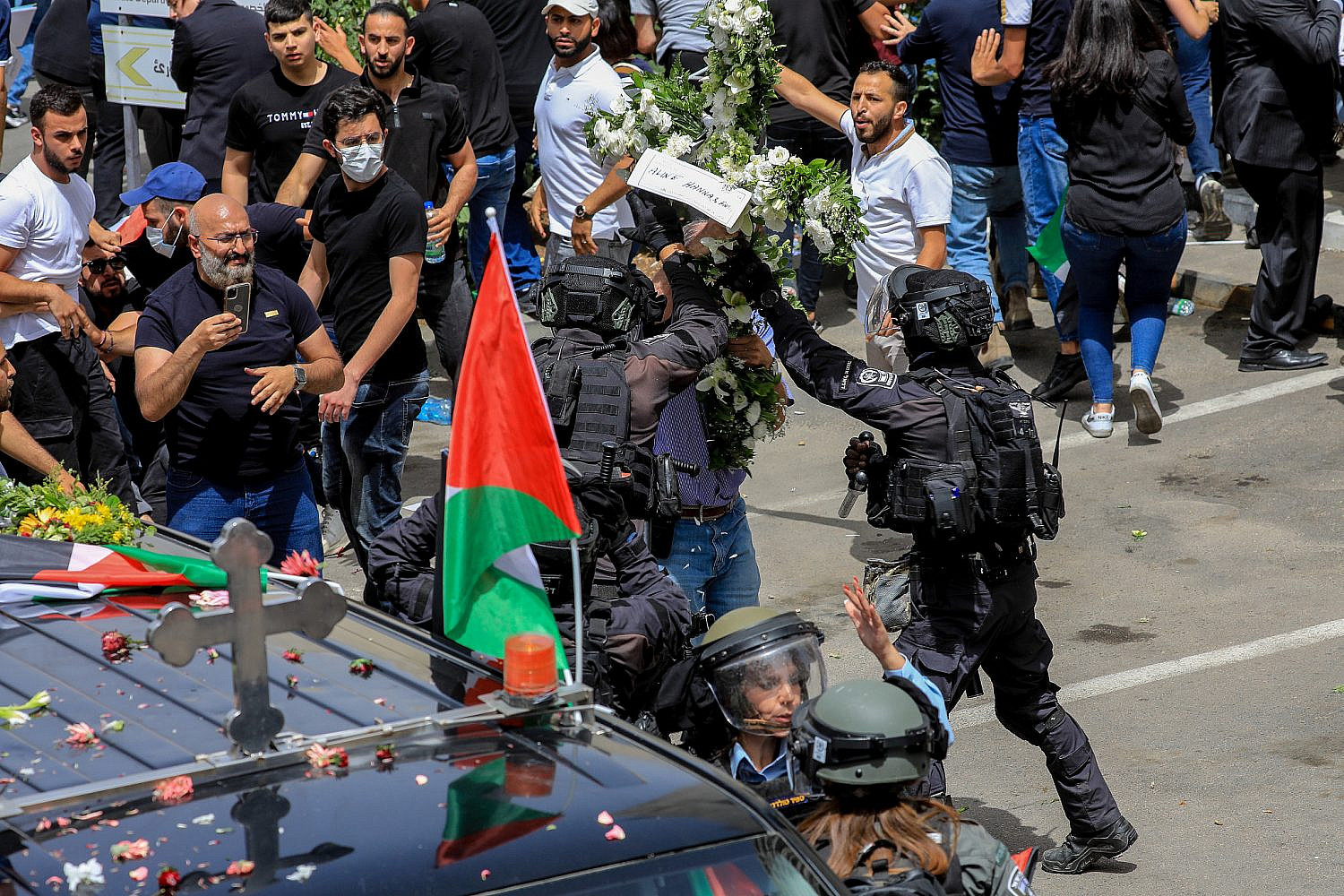 The police further claimed that the pallbearers, whom they described as a “mob,” acted against the family’s wishes by taking Abu Akleh’s coffin to the masses, an account which Abu Akleh’s own brother flatly dismissed as “illogical and untrue” while slamming the police for their “extreme, vicious, and brutal force.” The authorities essentially tried to portray the Palestinian mourners — and for that matter, the waving of the Palestinian flag — as a provocation warranting police response, using the people’s presence as an excuse to turn the hospital into a site of repression.

As we try to make sense of Israel’s unbridled violence — unconcerned with the world’s gaze and confident in its impunity — it is important to recognize the particularly egregious nature of the police attack at Saint Joseph Hospital, and how it is emblematic of Israel’s total disregard for its duty to protect Palestinian hospitals as neutral institutions and to ensure the safety of patients and medical staff, as guaranteed by international law.

We must first remember that the Israeli police — in addition to being an agent of an occupying power which should not be in East Jerusalem in the first place — are not a source of security for Palestinians, but quite the opposite. This was most recently demonstrated during the Jerusalem Day Flag March, when thousands of ultra-nationalist Jewish Israelis paraded through Damascus Gate and the Muslim Quarter of the Old City, chanting racist slogans and attacking shop owners and Palestinian residents on their doorsteps. While the police colluded with the marchers and provided them with protection, they simultaneously arrested scores of Palestinians during and after the march itself. It is hardly a stretch for these same police to violate the autonomy of a Palestinian hospital.

In lieu of this, although the attack at Saint Joseph’s Hospital was portrayed as an unusual event by the media and members of the international community, it was hardly the first time that Israeli forces have raided hospitals in East Jerusalem. In fact, Palestinian hospitals in the city have long been targets of repeated invasions and abuses, particularly Al-Makassed Hospital in the neighborhood of a-Tur. 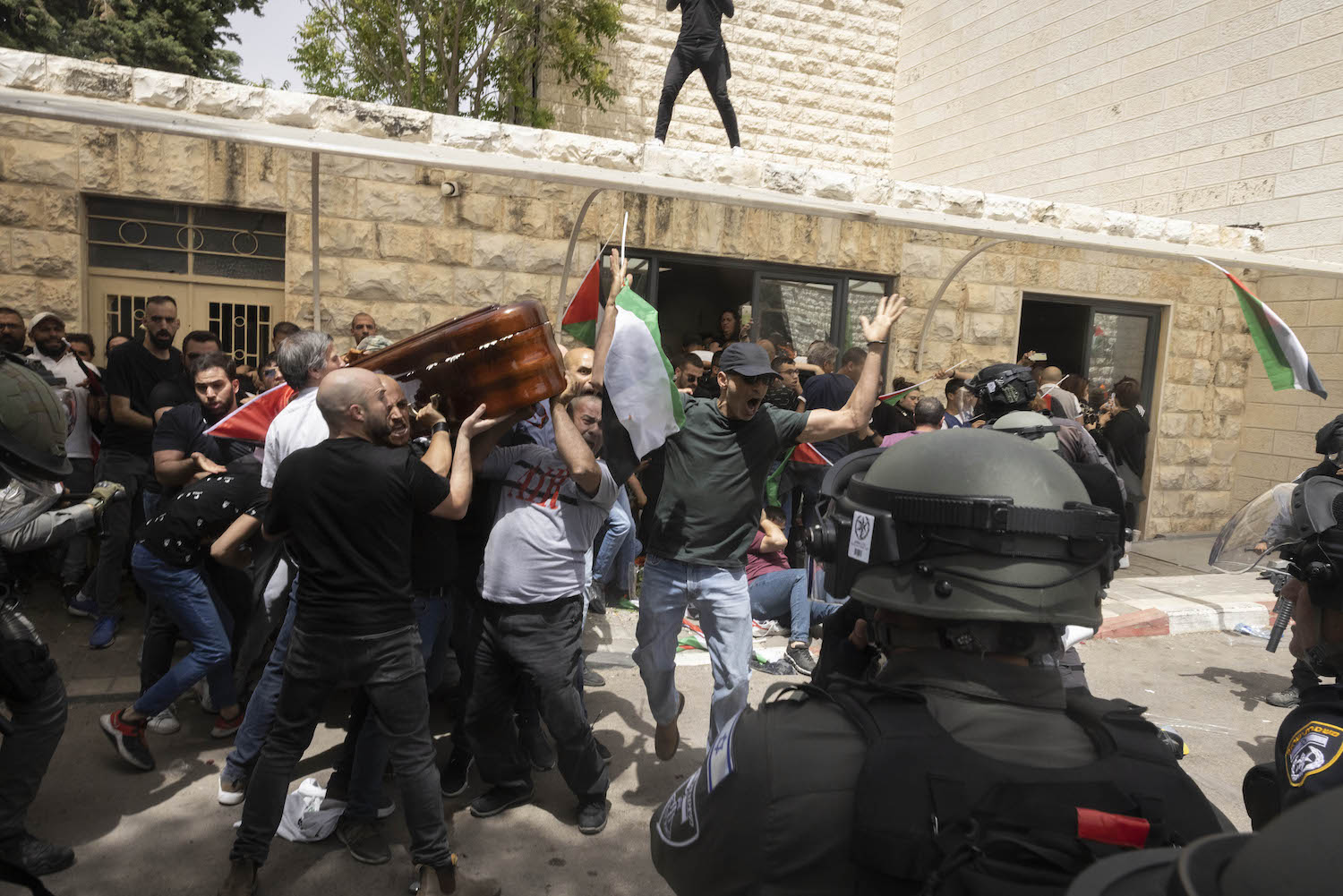 In many documented cases, Israeli border police have even raided hospitals in order to arrest demonstrators being treated for wounds, while demanding the staff hand over lists and health records of the wounded persons in a clear violation of medical confidentiality. In one case, a protester who was shot by Israeli security forces with live ammunition left the hospital after receiving only primary care, fearing detention and further threat to his safety.

These attacks are part of a wider trend throughout the occupied West Bank and Gaza. In April-May 2021 alone, during the violent escalations that spread from Jerusalem to Gaza, the Israeli military carried out 132 attacks on the health sector in the occupied territories, among them injuries to health workers, damage to ambulances, damage to health facilities, and detentions or confiscations on health properties; 44 of those attacks occurred in East Jerusalem. These incidents are rarely if ever investigated, no one is ever held to account, and the violations are not consistently condemned by the medical community locally and internationally, revealing the extent of Israel’s impunity.

The indifference, if not legitimization, exhibited by the Israeli medical community toward these systematic attacks on Palestinian health facilities and workers is noteworthy. On May 19, less than a week after the incursion into Saint Joseph hospital and the attack on Abu Akleh’s funeral, the Israeli Medical Association (IMA) declared a national strike protesting violence against medical staff, after a patient’s family attacked physicians and nurses in Hadassah Mt. Scopus Hospital, barely a mile away from Saint Joseph’s. This horrific event has rightfully sparked wide public outcry and led the IMA to take decisive action.

And yet, when Haaretz journalist Nir Guntiz asked Prof. Zion Hagai, the head of the IMA, about his failure to condemn the police violence against Saint Joseph’s medical staff, let alone call for a strike, his answer was simple: “Yes, you are right. We don’t want to. The IMA is an apolitical organization, we don’t enter such political issues.” This remark says much about what the IMA, and the indeed wider Israeli establishment, perceives as violence against medical personnel and which staff are worthy of sympathy and solidarity. 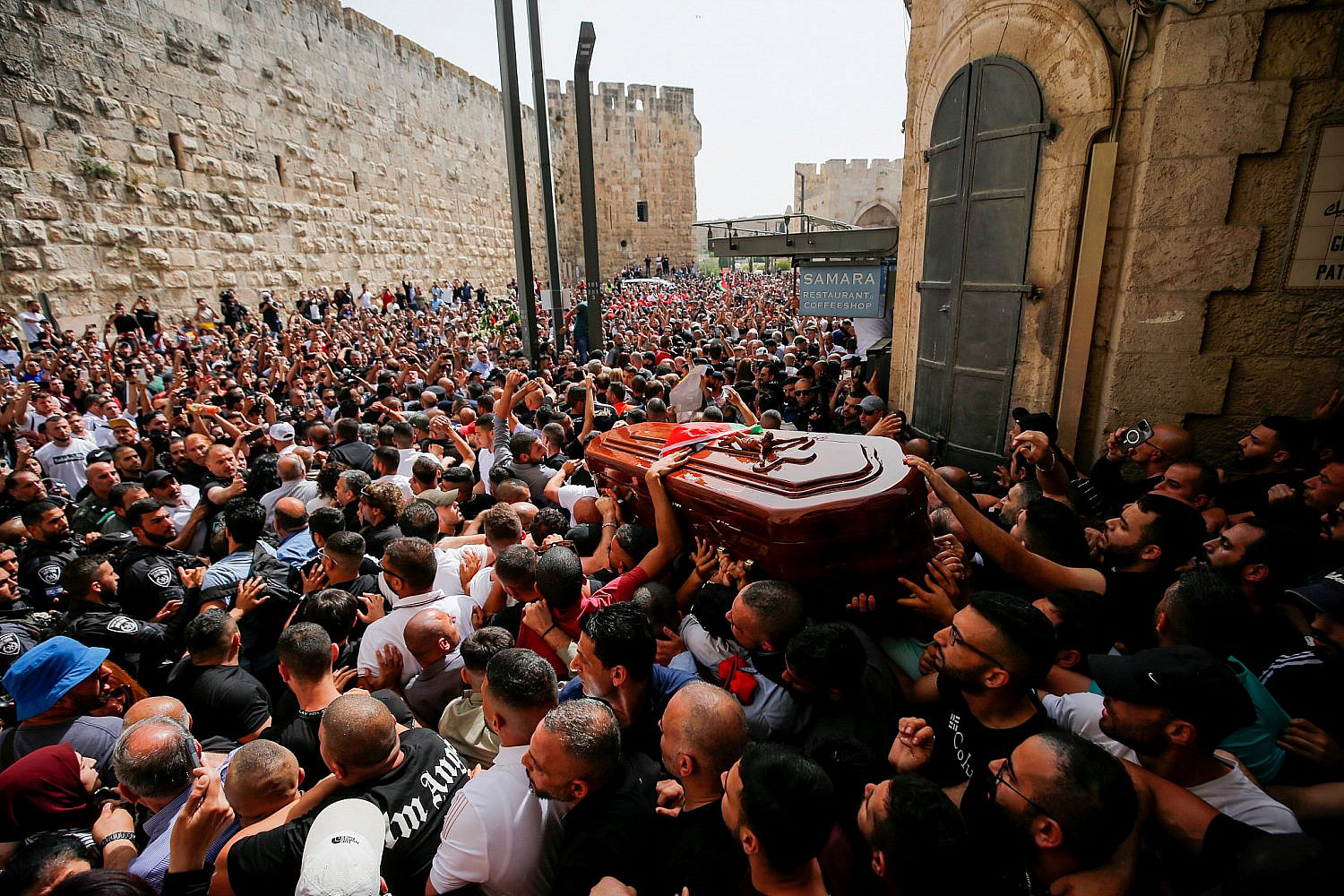 That disinterest toward Palestinian health workers and their communities is exhibited in symbolic ways, too. During the COVID-19 pandemic, the mayor of Jerusalem decided that the best way to salute the staff of Saint Joseph Hospital for their hard work would be to fly military jets overhead on the eve of Israeli Independence Day, in what he called a “historical and exciting event that symbolized the unity against the virus.” This “gesture” was completely tone-deaf to the Palestinians whom the state occupies, discriminates against, and systematically neglects in every field of life, and whose rights are deliberately trampled on in order for Israel to impose the city’s “unity” under its rule.

The assault on Abu Akleh’s funeral was thus the most visible and highly-televised episode in a consistent pattern of Israeli attacks on healthcare facilities. It also made clear once again that the Palestinian body has no safety — not alive nor dead, not in a battlefield nor in a hospital. It is time the international medical community recognizes the extent of violence and lack of safety that Palestinian hospitals face, and advocates for their protection from Israeli forces.

Osama Tanous is a pediatrician, a board member of Physicians for Human Rights-I, and a visiting scholar at the FXB Center for Health and Human Rights at Harvard University.

Ghada Majadli is the Director of the Occupied Territories Department at Physicians for Human Rights-Israel.