Unarmed resistance against the wall and the occupation has been taking place for nine consecutive years. With its ups and downs, successes and losses, villagers and supporters gather for a special commemoration protest. 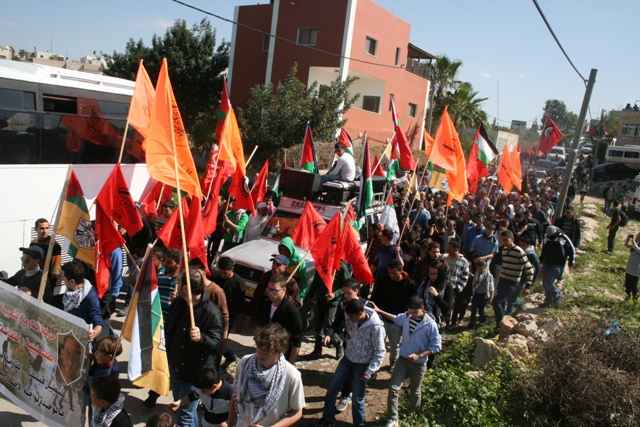 Marching through Bil’in toward the wall. (Haggai Matar)

Approximately 500 demonstrators gathered in the center of the West Bank village of Bil’in on Friday to mark nine years since village residents began their popular, unarmed resistance against the separation wall. The wall, built on the villagers’ agricultural land, has allowed for continuous settlement expansion on their annexed fields and olive groves. Over the past nine years, hundreds of demonstrations have taken place, two activists have been killed by the army and hundreds have been wounded or arrested. The struggle’s greatest success was its ability to force the state to move the wall further west, allowing villagers to return to some of their land. However, because much of the village remains behind the wall, the resistance continues.

The demonstrators, who were made up of residents from the small village itself; supporters from other villages participating in the popular struggle such as al-Ma’asara and Nabi Saleh; activists from the Democratic Front for the Liberation of Palestine (a socialist party founded 45 years ago this week) and the Palestinian National Initiative party; and international and Israeli activists, marched to the wall behind a drum line and a car with loudspeakers that chanted anti-occupation slogans.

Once they arrived at the wall, several local activists used ropes to climb the the eight-meter-high concrete barrier and planted Palestinian flags on it. Soldiers were quick to throw stun grenades at climbers, which lead the protesters to respond by throwing stones, followed by a round of tear gas at the procession. The demonstration continued for nearly an hour and a half, with the majority of activists keeping their distance from the tear gas, while several youths confronted the soldiers with stones.

The protest ended after a protester and an Israeli photographer were lightly wounded by rubber-coated bullets, and after soldiers crossed the separation wall to arrest another protester and break up the demonstration. Attempts by organizers to release the detainee by bargaining with soldiers only led to the latter sending out a vehicle which shot dozens of tear gas canisters at once and flooded the demonstration with tear gas. 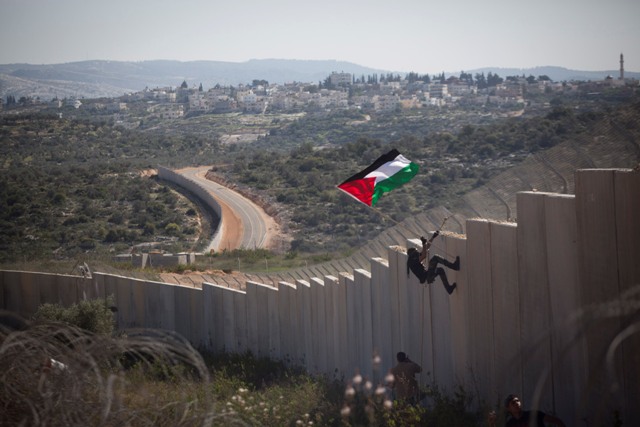 From Avatars to the Oscars

Protests in Bil’in started in 2005, just as the Second Intifada was dying down and a new method of resistance was being developed throughout the West Bank. Bil’in, which faced a loss of 1,700 dunams of agricultural land, took on the model of popular resistance and soon became one of its flagship villages. During the construction of the original fence, direct actions took place several times a week, with villagers and solidarity activists blocking bulldozers, tying themselves to trees and more. After construction was complete, local activists used original methods of protest, such as dressing up as characters from the film Avatar, trying to play football with soldiers across the fence, and bringing leading international politicians (such as Jimmy Carter, Marry Robinson and Desmond Tutu), musicians, authors and others to the protests.

In 2007 the High Court of Justice ruled that the fence’s route was illegal. It took more than three years until the state moved it to its new court-approved location, this time in the form of a tall, concrete wall, right on the edge of the Modi’in Illit settlement. The settlement illegally expanded onto Bil’in’s land during the years in which the residents were barred from accessing their land. Approximately 700 dunams of land were returned to the village and have since been put back to use. However, the struggle continues to return the remaining 1,000 dunams on the other side of the wall. 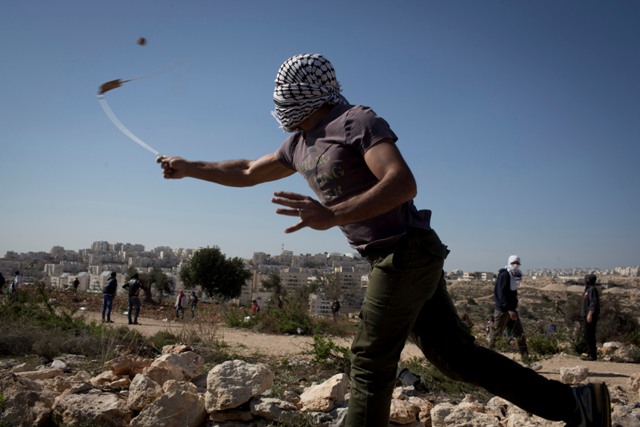 Over the years, two activists were killed by soldiers: Bassem Abu-Rahme and his cousin Jawaher Abu-Rahme. No soldiers were ever put on trial for the deaths. Countless activists have been wounded and arrested, and popular committee leaders spent long periods of time in prison for organizing protests. One soldier lost an eye after being hit by a stone (the single worst injury reported on the army’s side). Aside from arrests, the IDF has tried to break the resistance with countless night raids, curfews, and the use of different weapons against the demonstrators.

Two movies have been made about the village’s popular struggle: “Bil’in Habibti” (Bil’in My Love) by filmmaker and activist Shai Carmeli Pollak, and “Five Broken Cameras” by Guy Davidi and Bil’in’s own Emad Burnat. The latter was nominated for an Academy Award for Best Documentary Feature at the 85th Academy Awards. A book documenting life and resistance in the village was also published by local photographer Hambe Abu-Rahme. 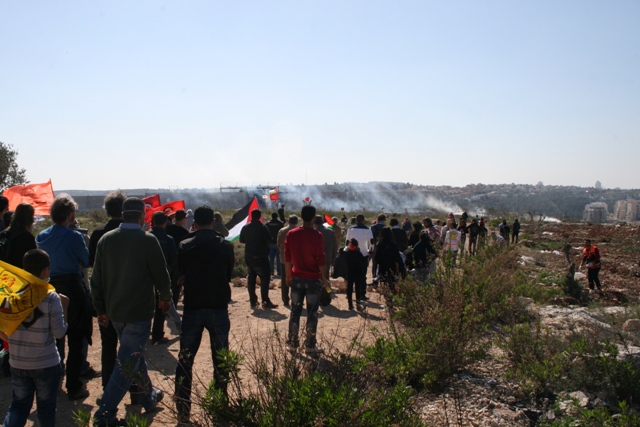 Over the years, Bil’in has become a symbol for the Palestinian popular struggle – a place for joint, unarmed activism by both Palestinians and Israelis, and an example of how resistance and cooperation can work on a larger scale. As the protests enter their 10th year, I know that I will keep returning to take part.