Visually, the protest yesterday  veered from the Italian cinema 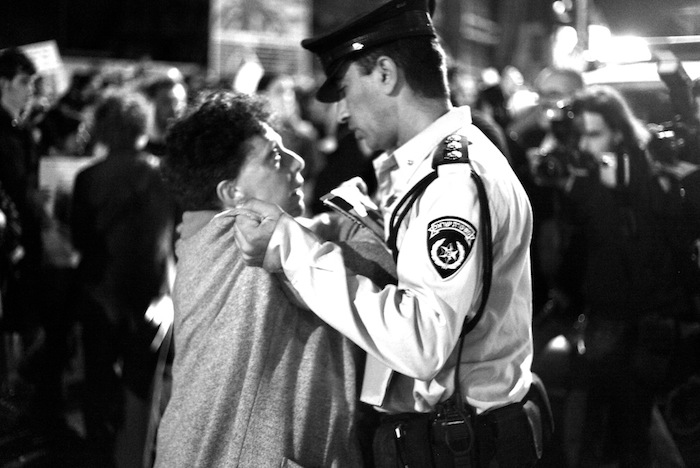 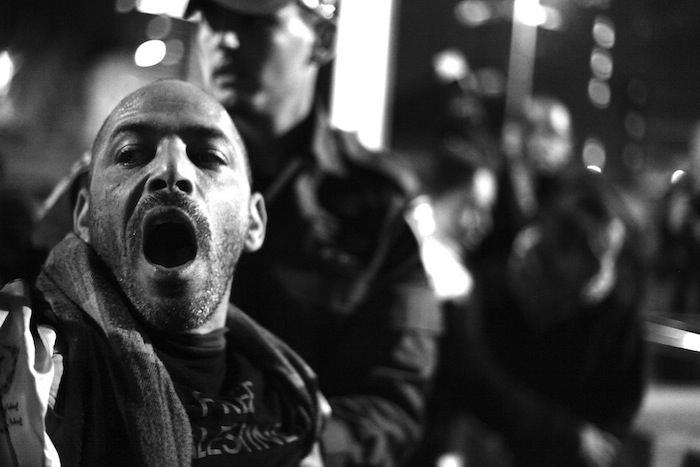 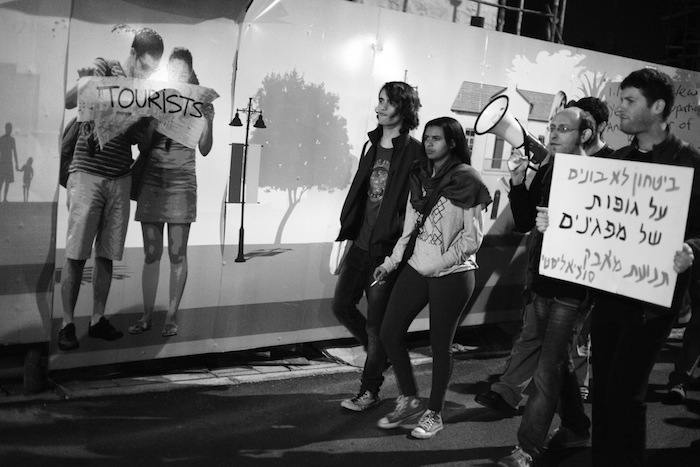 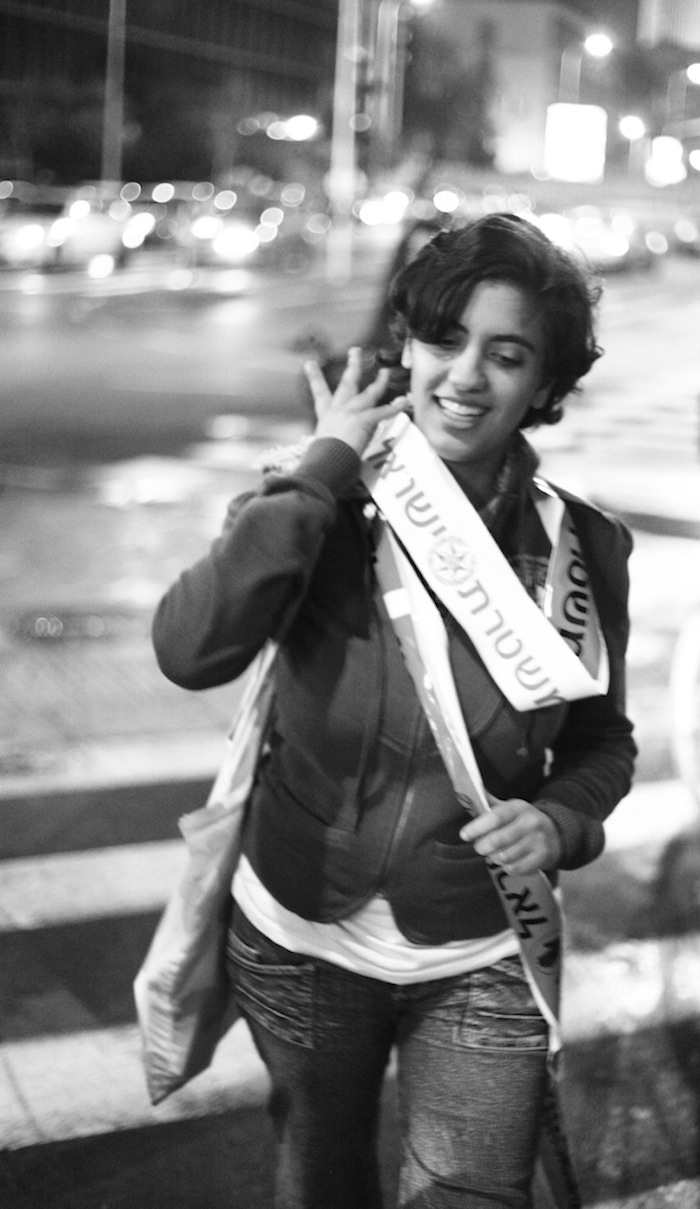 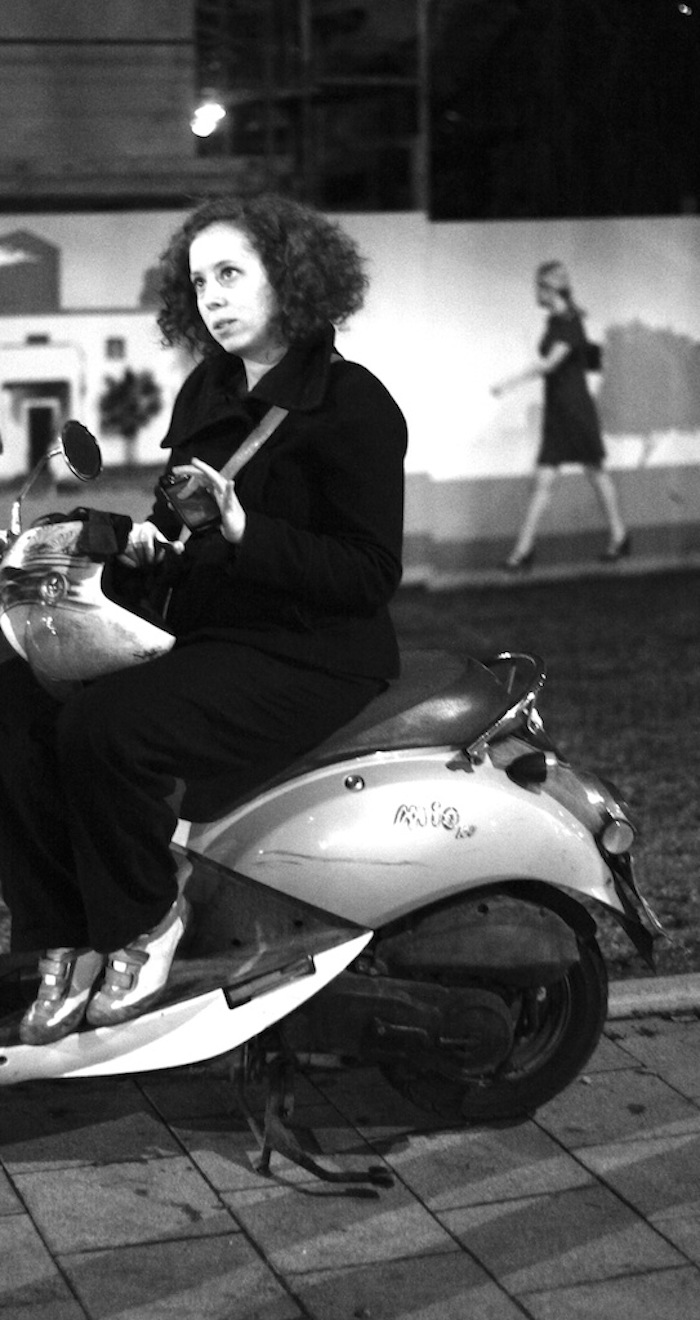 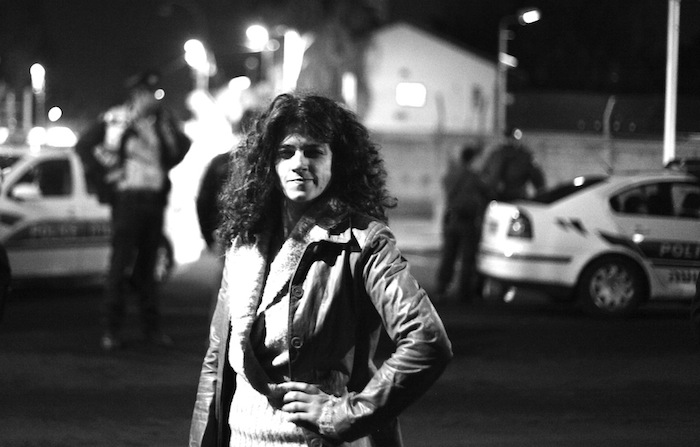 But the overwhelming sensation – despite the tension and the occasional violent flare-up – was that of an almost good-natured surrealism. After trying to clear the road – using, I should note, only hands* – no clubs, hoses or horses, though few people were hurt and  a few horses were brought it for the show- the policemen give up, and actually block a segment of the street for us; partly out of fear of being blamed for any harm that might come the tough and venerable Uri Avenry (86), who with typical bravery sat down on the road together with protesters young enough to be his grand-grand children; partly sensing that the mood wasn’t that violent, and that people will tire soon enough. Everything settles down in a kind of a detente; the protesters sit, the policemen stand; the police commander commands to “clear the road”, and someone replies “we’ll clear the road when you clear the Territories,” to much applause. The protesters chant:

…then resort to reprising two numbers from the Cape Town Opera boycott flash-mob:

and when that doesn’t work, try for a beautiful lullaby by rock icon Shalom Hanoch:

The police reply they’ve got all night. I use the photojournalist’s privilege of slipping through conflict lines and walk up to talk to the police – especially the Yassam, the special Patrol Unit, which I normally know as state violence and menace incarnate, coming at us with clubs and fists. “Looks like it’s calming down,” I tell the first Yasamnik I encounter, a short, grizzly fellow with a judiciously missing name tag and a cap moved over his face. “Yeah, man,” he replies, “I hope we’ll just all go home soon. I’ve got nothing against you guys personally, whatever I think about you politically, and I totally believe in your right to protest. It’s all about red lines.” “You know,” I tell him over the chants, “when people will start demonstrating over policemen’s rights – how they’re not allowed to unionise and are paid shit wages – most of the people sitting on the road now will sit on the road for you guys, too.” “Really?” grins the Yassamnik in disbelief. “It’s a nice thought, but these people here appear to be against regimes in general. I don’t think they’ll do something for people working for the regime.” I open my mouth to reply, and then a protester, of the exuberant elderly lady persuasion, inserts herself between us. “Hitler also had a regime, you know!” she exclaims happily into the policeman’s face. He looks at her, looks at me, and corrects himself: “I wouldn’t want to generalise, of course.” I tell him I think most people would see the principle as well as the pragmatics in supporting policemen’s civil and social rights, and we part with a handshake.

Behind me, a classical two-state argument begins, with one of the sitting protesters appealing to policemen’s racism and xenophobia instead of to their needs: “We’re here for you, you know! If there won’t be a two-state solution there will be a one state solution with a Palestinian majority! Now, I don’t have a problem with that, but you wouldn’t like it, right?”

In front of me, a policeman and another protester listen in, shrug, and exchange cigarettes. The commander gives a sign, and the Yassamninks form a menacing line, ready to charge the sitting crowd; after a tense few minutes, the bullhorn proclaims: “We will now disperse in a non-violent manner, and go to support our friends at the police station!” The crowd and the policemen grin, some with relief, some with disappointment; protesters applaud, as do, sneakily, two policemen standing behind the commanding officer; and the entire happening melts into an ordinary city night.

Oh, and lest I forget, just for you readers – a comic book version: 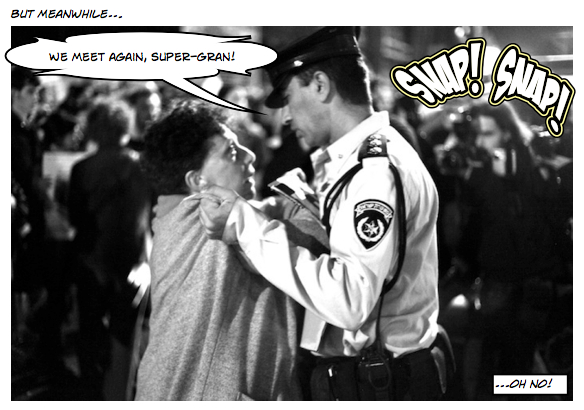 May 2011 be a year of awakening, alliances and resistance.

*The total violence tally from the protest was, as far as I could see: A former Meretz MK slapped and dragged into detention; a woman thrown to the ground, face-first; and a protester – the one in the second picture – brutalised by an enraged uniformed bully, who twisted his hands for about five minutes while “trying to fit the handcuffs,” quite deliberately causing unnecessary pain. I don’t mean to diminish any of those injuries, the bravery of those who sat on the ground knowing the mood can change from reasonable to beastly at the wail of a policeman’s whistle, or to deny the fact police are routinely more harsh to left wingers than to any other demonstrators. But on the police violence scale of my personal experience, this protest ranks at about 4.  Thankfully so.

For more coverage of the death of Jawaher Abu Rahmah: