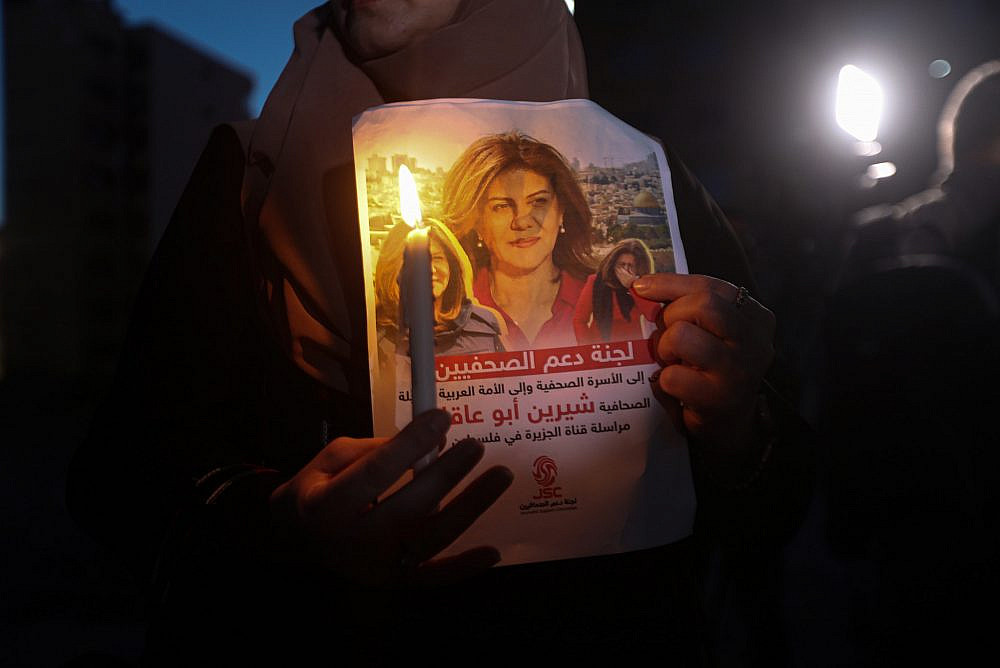 Palestinians hold a vigil in memory of Shireen Abu Akleh in Gaza City, May 11, 2022. (Mohammed Zaanoun/Activestills)

2022 has been a year of many monumental international events. This is the year we managed to reach 8 billion people living on earth, despite bidding farewell to Queen Elizabeth II and while surviving Elon Musk as CEO of Twitter. We’ve witnessed environmental travesties like floods and hurricanes, political turmoil including invasions and war, social protests against human rights injustices, and even a controversial yet landmark World Cup in Qatar.

For us in Palestine, much of 2022 kept us busy mourning the loss of land and of dear friends under the “benevolent” rule of the Israeli occupation. And with the new far-right Israeli government being sworn in last week, there will be no shortage of ugly bigotry, racism, and violence to keep us busy next year, too.

But looking back, as we brace ourselves for 2023, there have been plenty of lessons for Palestinians to take from this past year about how the world works — and in particular, how it works against us. And while we had known many of these lessons long before, 2022 provided further evidence of these realities. Here are just some of our biggest takeaways:

1. Last year, Palestinians (along with Syrians, Rohingya, and others) learned that some refugees are clearly more important than others, and some acts of resistance are more acceptable — if they have the right skin color and ethnic background. It turns out that boycotts and sanctions against military occupations are totally legitimate and effective — that is, except when it comes to Israel, then they are “counterproductive” at best and “racist” at worst. We learned this after watching the unprecedented international reaction, mainly by the Western world, to Russia’s war on Ukraine. We get that Europe felt a frantic sense of urgency given that Ukraine is right at its doorstep. But come on, Palestinians have only been asking for some action for the past 74 years, yet all we received were words of condemnation and concern.

2. We know very well that Israel enjoys numerous layers of impunity internationally, but even we were still shocked by the scope of it this past year. The murder of the prominent and beloved Palestinian journalist, Shireen Abu Akleh, seemed to set a new precedent for the kind of crimes that the Israeli occupation could get away with in broad daylight. And as if Israeli forces were not satisfied with murdering her, they even attacked the pallbearers carrying her coffin during her mass funeral procession in Jerusalem. On top of all this, Shireen was a U.S. citizen, which some might have considered a safety net, if not a substantial reason for Washington to intervene; instead, we learned that even the blue hue of her passport couldn’t dissuade the occupation forces from targeting her, nor push the United States to stand up for her rights. When you are a Palestinian, there is no protection. 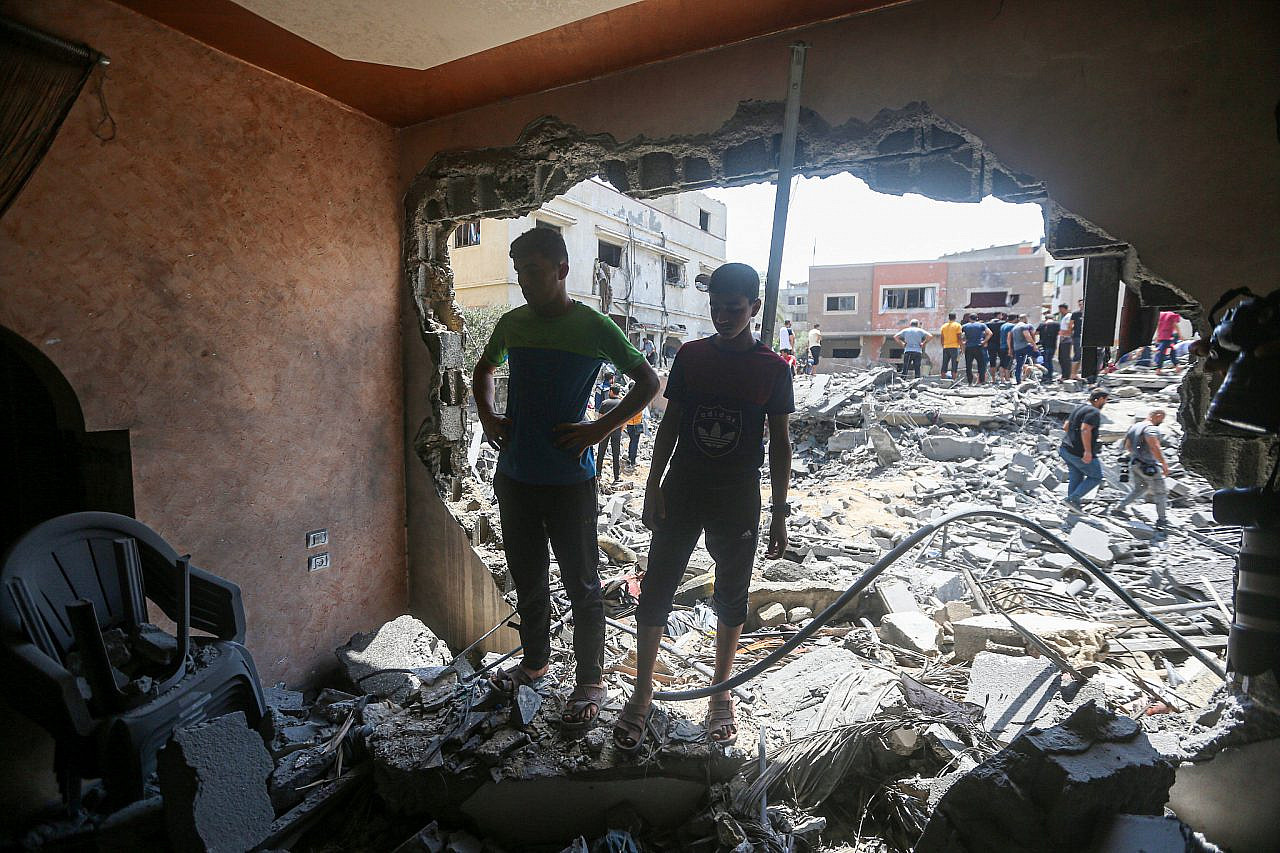 3. Come election time in Israel, Palestinian lives often serve as political capital inside the Israeli political arena. The calculation that Israeli politicians make is clear: when you flex your military might on Palestinians, you are viewed by many voters as a strong and capable leader. We took detailed notes on this lesson when the so-called “moderate” Israeli government, led by Naftali Bennett and Yair Lapid, decided to launch an unprovoked military operation in Gaza last August, killing 49 Palestinians including 17 children. This attack may have gained a few points for Lapid in the polls, but not enough to bring down the ultimate “strongman” who already oversaw three previous and far more devastating wars on Gaza — Benjamin Netanyahu.

4. We have confirmed that the promotion of violence, racism, and bigotry against Palestinians no longer needs to be subtle or kept under the table. Israel has just sworn in the most extreme right-wing government in its history, at the end of a year that saw the highest number of Palestinians killed in the West Bank since 2005. Politicians have not only embraced their racist traits with pride, but are openly inciting further violence among their supporters, the settlers, and its security forces. This open season against Palestinians is also unfolding in countries like Germany and the United States, where intensive efforts are underway to smear any expression of Palestinian identity and activism as inherently antisemitism. For these governments, racism is supposed to be combatted, but anti-Palestinianism is to be encouraged.

5. Democracy is hypocrisy in Israel. Among many examples to prove this, the former Defense Minister of “the only democracy in the Middle East,” Benny Gantz, outlawed and tried to shut down six prominent Palestinian human rights groups after deeming them “terrorist organizations” — with no serious proof to back it up — in an attempt to delegitimize their work and threaten their staff and supporters with severe criminal charges. Late last month, the Israeli Interior Ministry exiled French-Palestinian human rights lawyer Salah Hammouri after revoking his Jerusalem residency, a policy that constitutes a war crime under international law. All the while, five million Palestinians in the West Bank and Gaza were forbidden from voting in the “democratic elections” that would eventually decide the makeup of the Israeli government that rules over them.

6. The divisions between the Palestinian leaders who hope to replace President Mahmoud Abbas are larger than we thought. Since elections or any kind of a democratic process is no longer on the horizon, everyone from the White House to the barbershop is trying to guess who will succeed the president of 17 years. Meanwhile, the PA has lost further ground in the occupied territories, after losing control over parts of the West Bank — not to mention losing even further popularity — to armed groups like the Lions’ Den in Nablus and the Jenin Brigade, which have no affiliation to any of the archaic political parties and have been gaining tremendous support very quickly. While it is hard to be optimistic about the future considering all these problems and massive imbalances of power, this year nonetheless gave us hope of building on our resilience and on new social trends that are slowly turning in our favor. The Palestinian people are still here on this land, protecting their identity while working toward establishing a new paradigm to change the status quo. In many ways, public opinion around the world is shifting back to where it was in the late 1980s, during the days of the First Intifada, thanks to social media and the gradual inclusion of more Palestinian voices in mainstream outlets. This is greatly aided by the fact that Palestine is seen as intersecting with other causes and ideologies that aim to achieve social, racial, and economic justice, at the same time that Israel has openly aligned itself with supremacists and authoritarians.

And perhaps most inspiring: we discovered that our hope that unwavering support for Palestine still remained in the Arab world is, in fact, very real. For years now, and most recently in his new autobiography, Netanyahu has been demanding credit for signing peace deals with four Arab countries as part of his strategy of removing the Palestinian cause from the table. But what we saw in the World Cup in Qatar was crystal clear: the treaties signed by Arab governments do not speak for the people of those countries, who continue to have a loyal love for our cause. Palestine being so visible on one of the biggest sports stages was something we had never seen before, and showed just how central the Palestinian struggle remains in the Arab world. That knowledge will definitely keep us hopeful as we step into another year of struggle.