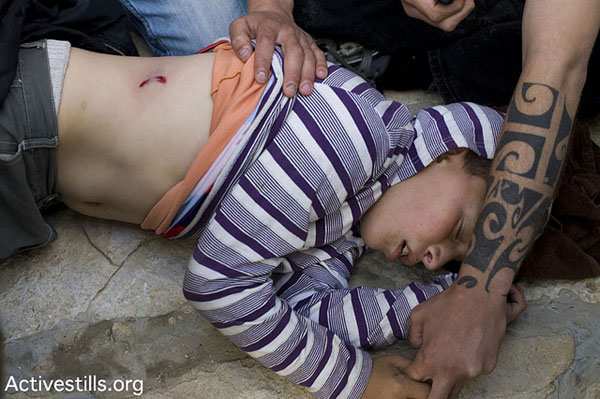 Last summer I found myself wading around a swimming pool in the middle of the scorching desert on a Kibbutz in the Negev. I had come to this kibbutz to see an old friend from high school. Over the past 12 years we have developed and maintained a close friendship despite clear political differences which, in this country, can easily destroy personal relationships.

As we swam in the cool water, the topic of conversation turned to his reserve service. This friend of mine, let’s call him Avichai, had just finished a round of reserve duty in the Palestinian village of Ni’ilin, where I often attend and cover the demonstrations against the Separation Barrier. I was shocked to hear that he had served there and quickly realized that he had probably fired tear gas, rubber bullets or live ammunition at me. Our conversation took an uncomfortable turn.

I asked him directly, ‘what does it take for you to look at children and shoot at them with tear gas, rubber bullets and live fire?” He nonchalantly informed me that they are not children, rather enemies on a battlefield. When I asked him if he considered me an enemy for standing with the children, he brushed away the question suggesting that I was just confused. Sensing his growing discomfort, I ended the conversation knowing that relationships can end over politics in Israel.

Avichai’s thoughts regarding the use of force against Palestinian children, while shocking, are not that uncommon in my experience in Israeli society. Breaking the Silence, an Israeli NGO which collects testimonies from soldiers about their service in the Occupied West Bank and Gaza, has released a number of first-hand accounts of soldiers who were told by their superiors to treat civilian areas as combat zones. Reading the testimonies, one sees an army that does not always make the proper distinction between enemy and civilian. This policy is on raw display during the weekly unarmed demonstrations against the Separation Wall and Occupation throughout the West Bank.

In the quiet village of Nabi Saleh last Friday, during a weekly demonstration against the Occupation, a child was directly hit by an Israeli tear gas canister. According to eyewitness Jonathan Pollak, the media coordinator of the Popular Struggle Coordination Committee, eleven-year-old Muhammad Bilal Abdul Salam At-Tamimi was standing in a crowd when soldiers began firing tear gas canisters in their direction. Tamimi was hit directly on the side of his stomach and taken to a Ramallah hospital. After a brief stay in hospital, he was released in what appeared to be a good condition.

Two days following the incident, Tamimi began complaining of pain in his stomach and was readmitted to hospital. Doctors found that he was suffering from internal bleeding of the liver and kidneys caused by the tear gas canister injury, his father told Ma’an this morning.

Tamimi’s internal bleeding is the latest injury to a child reported in Nabi Saleh. Many children have been injured from tear gas, beatings, rubber bullets and even live fire in the village over the last two years of demonstrations. This type of violence against Palestinian children is not uncommon, and sadly, it is growing as Israel explores new options of ending nonviolent Palestinian resistance to occupation.

Addressing the 6th annual Bil’in conference on Palestinian popular resistance, Advocate Gabi Lasky spoke of how children are being used to implicate the leaders of popular unarmed demonstrations like those in Nabi Saleh and Bil’in.  Lasky, an Israeli lawyer who has represented high profile Palestinian political prisoners such as Abdullah Abu Rahmah, told the crowd that Israel has failed to end unarmed demonstrations by military force. The army has killed 21 unarmed demonstrators, including five children, injured hundreds and used collective punishment on villages through the liberal use of violent crowd control measures and night raids. Nevertheless the demonstrations have not stopped. Now Israel is using the military court system to end the demonstrations.

The method is simple and effective: arrest children in military night raids, verbally harass and traumatize them, interrogate them without the presence of lawyers or parents and inform them that the maltreatment will stop as soon as they confess that popular committee leaders instructed them to throw stones. Despite the illegality of these methods, Israel is currently deploying them in Nabi Saleh.

Thinking back to Avichai’s comment about Palestinian children as enemies on a battlefield, I have a hard time faulting him directly. He is merely part of a system that is based on a philosophy of control, submission and separation of Palestinians. It is the current status quo of endless peace negotiations, endless occupation and little violence against Israeli civilians which allows this system of violence to continue. If there is one constant in the Israeli-Palestinian conflict now, it is that Israel will go an awfully long way to protecting the status quo.