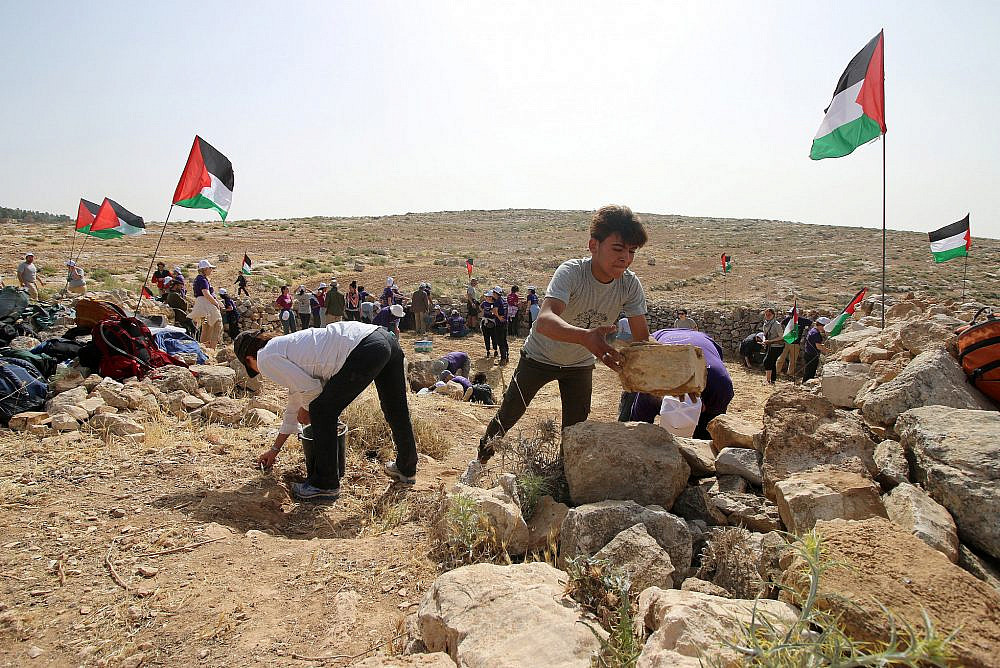 Palestinians and Jewish activists from Israel and abroad work to build the Sumud Freedom Camp’s main tent in the village of Sarura, whose residents were forced out in the 1980s and 1990s, South Hebron Hills, occupied West Bank, May 19, 2017. (Activestills/Ahmad Al-Bazz)

In early June, Palestinian residents of villages in the South Hebron Hills, where I was born and still live today, joined other activists in a large protest in support of local communities facing expulsion in Masafer Yatta. Although it had been violent, including an attack by settlers on a car of activists and violent dispersal of the protest by soldiers, people left feeling satisfied that we had shown the army that we will not allow our forced transfer to pass quietly.

After the protest, the activists gathered near my home at the community center of Youth of Sumud, a local Palestinian human defense group of which I am a member, in order to rest and hydrate, and to hear from leaders of the Masafer Yatta campaign about the importance of maintaining our struggle. It is in moments like these that I am so grateful that Youth of Sumud has this space — a place where people can gather to learn from one another and share our work of resisting the occupation. But just days after the protest, the Israeli army handed our beloved activist center a demolition order. That means it could be destroyed at any moment.

The demolition order against our center comes as the Israeli army is working to evict Palestinian communities in Masafer Yatta, in an area it has declared a firing zone. This will lead to another Nakba in Masafer Yatta, leaving thousands of people as homeless refugees.

We founded Youth of Sumud in 2017, when I was 18 years old, in the village of Sarura in Masafer Yatta. Our first activity was to rehabilitate a cave in the village in order to help restore the Palestinian community that once lived there. From there, we began working in villages across the South Hebron Hills and, soon after, across the entire occupied West Bank. Whether it is night raids by the army in our own village of A-Tuwani, or violent attacks by settlers against Palestinians harvesting their olive trees in the Jordan Valley, we aim to be there to support communities near and far. All of our work has the goal of supporting Palestinian farmers and families, often in dangerous places, to help them and ourselves in our continued resistance and struggle against the Israeli occupation.

For the first few years, Youth of Sumud met in the cave we had rehabilitated in the village of Sarura. Last year, we learned about a competition run by an initiative called Aal Ard [Arabic for “on the ground”] to support youth resistance work that enhances communities’ abilities to stay on their land, and we applied in order to be able to build a community center inside the village of A-Tuwani. We were thrilled to win, along with six other initiatives in the West Bank, and honored to build a center that would allow activists to come together. 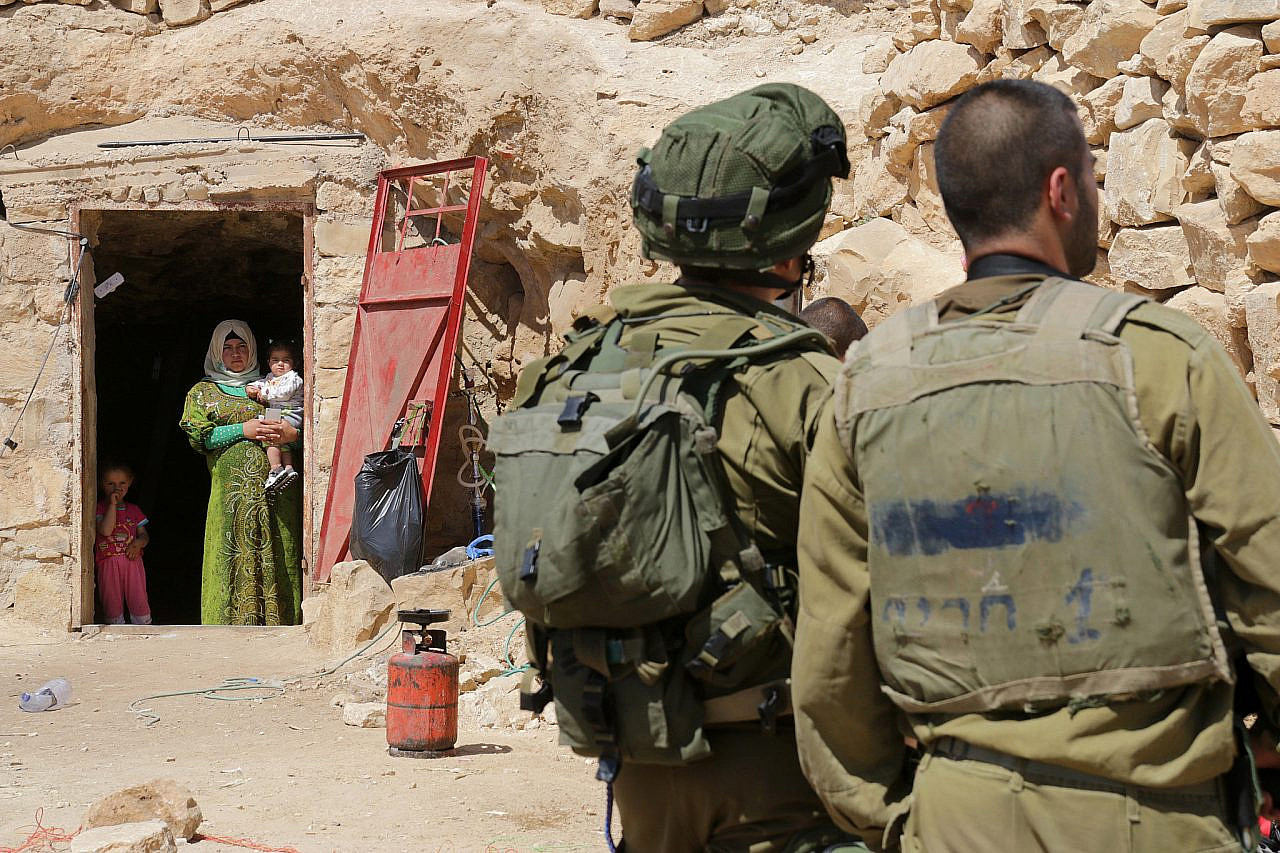 Israeli soldiers stand in front a cave in which a Palestinian family lives in Sarura, South Hebron Hills, during the second military raid on the Sumud Freedom Camp, May 25, 2017. (Activestills/Ahmad Al-Bazz)

We have held many activities in the community center, especially programs for women and youth. We have led and hosted legal training and first aid training, women’s empowerment courses, a photo voice project for women to tell their stories, sewing classes, and language courses in Hebrew and English. We also made sure the community center could function as a guest house, which has enabled us to host individuals and delegations who come and visit the area in order to stand in solidarity with us.

We understand that the army’s efforts against the villages and our community center are part of a broader project of trying to displace Palestinians from our land and crush our resistance. The attempted evictions of those villages and the planned demolition of our center are happening at the same time, by the same regime. Our oppression is shared, which means that our resistance must be shared too.

I don’t know if the military issued the demolition order when it did as retaliation for having hosted activists after the protest; it is certainly possible. But I do know that our center has been targeted by the army and by the settlers. They are trying to demolish our community center, our struggle, and our co-resistance. We will fight against this demolition, but we also know that the settlers and army are wrong: even if they destroy our center, they can never destroy our activism and our resistance.

Sameeha Hureini, 23 years old, is from the village of A-Tuwani in the South Hebron Hills. She is currently finishing a degree in English literature.