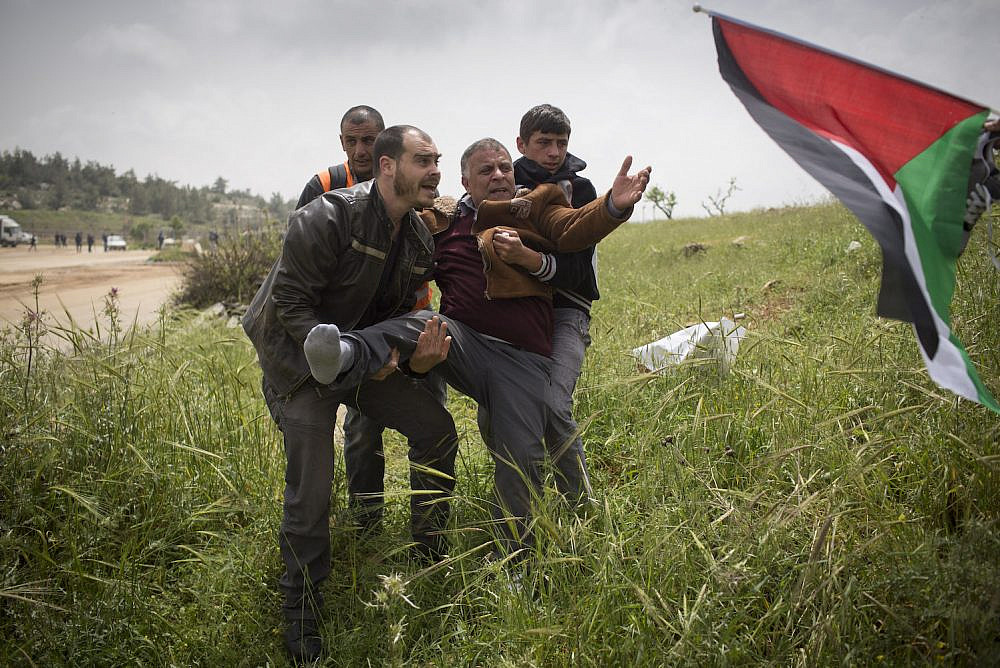 Photo: An Israeli protester helps carry a Palestinian who was wounded during a demonstration marking Palestinian Prisoners' Day, outside Ofer Military Prison, near the West Bank town of Betunia, April 16, 2015. (Oren Ziv/Activestills)

A few days after it became clear that Israelis had elected a far-right, Jewish supremacist government, I spoke to some Palestinian activists at an olive harvest in the occupied West Bank. Despite the grim mood among the left in Tel Aviv, where I live, not a single one of the activists I spoke to showed any sign of depression. Not one of them spoke about leaving the country for Berlin and, more importantly, none of them dreamt of giving up on protests, boycotting Israel, or actively resisting the occupation by other means.

Some of those I spoke with had spent time in Israeli prisons, long before Itamar Ben Gvir arrived on the scene. Some expressed fear that the new government would be worse, while also wondering whether anyone in the international community could now deny that Israel is a fascist state.

On the other hand, it’s not difficult to understand why Ben Gvir’s recent election win raises fears among many Israeli Jews, since until now they have been relatively protected from policies that affect “undesirable” groups, most prominently Palestinians. But before we begin to formulate a broader plan for how to deal with the new government, the left needs to return to basic acts of resistance and solidarity — not only against Ben Gvir, but against Jewish supremacy, colonialism, and apartheid, which were here long before the Otzma Yehudit leader.

We must stand alongside those who will suffer most from his policies, not to “change” or “strengthen the left,” but because trying to stop injustice is the right thing to do. In such an extreme atmosphere, solidarity is a basic — and sometimes the only — step to take.

At least for the foreseeable future, change will not come from the Knesset. That’s why Israeli Jews must take inspiration from direct action groups such as Anarchists Against the Wall, Ta’ayush, and other organizations that have been active against the occupation for more than 20 years.

Whether documenting settler attacks, home demolitions, and daily violence by the army; accompanying shepherds and farmers who face violence and harassment from the army and the settlers; or protesting in solidarity with Palestinians who face expulsion and replacement by settlers, these groups have helped set a precedent for how Jews must stand up against Israeli oppression.

The new government has also made clear its intention to promote conversion therapy and implement other draconian measures against the LGBTQ community, and particularly the trans community. African asylum seekers will also likely be targeted. In these struggles, too, there are organizations which have been fighting for years that need mass support more than ever.

Beyond joining protests or other activities, the left should also adopt a mindset of a persecuted minority, as Israeli scholar Idan Landau put it the day after the election. The Israeli Jews who oppose the occupation and Jewish supremacy are no more than a handful. This is the reality.

In the eyes of many in the Zionist center-left, Netanyahu’s victory, the entry of the Kahanists into the government, and the possibility of the Supreme Court being defanged means the further erosion of supposed liberal values (even if those values exist solely in the minds of those who lost the election), which will bring about a drastic change in their lives. And while it is unlikely that Ben Gvir and Netanyahu will immediately try to cancel Pride parades across the country or close cafes on the Sabbath, many in the liberal camp feel they no longer recognize their country. As new, draconian policies come into effect, this feeling may intensify and bring people into the streets to protest.

There is a chance that the new government will be careful not to upset the secular Jewish-Israeli public. Yet we will likely see increased attacks on Palestinian citizens of Israel, as well as an attempt to bar their political representatives from the Knesset. This will start with the disqualification of the Palestinian Balad party in the next election, as well as attacks on Arab local authorities, Palestinian activists on university campuses, and anyone who tries to promote Jewish-Arab partnership on any issue. Vigilante militia groups in the so-called mixed cities will be emboldened to take matters into their own hands, and the unrecognized villages in the Naqab will be targeted under the guise of the “fight against crime.” Teachers and civil servants who deviate from the party line will face increasingly severe punishment.

Faced with this situation, even the decision to leave the country is a legitimate one. A right-wing voter, who celebrated his camp’s victory, told me earlier this week: “If I were your age, I would leave.” But anyone who is forced or chooses to remain should think long and hard about how they intend to resist, and what risks they are willing to take. There is no need to resort to comparisons to Germany in 1933. It is enough to look at what is currently happening to anti-government activists in Turkey, Hungary, or Iran.

Just in the last month, armed settlers threatened to break my camera with an ax and threw stones at me while soldiers looked on. Police officers opened fire at my vehicle when I left the Palestinian village of Nabi Saleh, and members of the “hilltop youth” damaged my car, as well as vehicles belonging to other journalists and activists during the olive harvest in the West Bank. This, of course, is not a new trend, but it is clear that things will only get worse.

Still, in the current reality, every single act of resistance is crucial — and is a reminder for all of us that we’re not alone in the fight.