Here’s a new year’s resolution: I want to pay more attention to the places where we’re winning. Yes, these are dark, challenging times. The occupation seems to be increasingly permanent and the siege on Gaza has made the strip “uninhabitable” according to the UN. Israeli politics have long been moving rightwards and the entire political system is in complete deadlock. Anti-Semitism is on the rise worldwide, as are other forms of racism and xenophobia. And perhaps worst of all, the climate crisis is upon us, exacting real tolls, and we’re not doing enough to change course.

However, there are still legitimate reasons to have hope and keep up the struggle for a better and more just reality in Israel-Palestine — and globally. Looking at the past year can also help identify those developments and build on them. So here they are.

The end of the Netanyahu era

Just one year ago, it seemed like Benjamin Netanyahu was here to stay. In the lead-up to the April 2019 elections, many of us had legitimate concerns that some of the left and Palestinian parties wouldn’t even make it past the electoral threshold and into the Knesset, and that an even more extreme right-wing government would deepen de jure annexation, oppress Palestinian citizens even further, and step up the assault on freedom of expression and protest within Israel.

One year on, not only did this not unfold, but such a scenario now seems unlikely. The end of the Netanyahu era brings with it some good news: while the rise of the rival Blue and White party signifies a solidification of the right in Israel — and the removal of both the occupation and social justice issues from the public and political agendas — it also suggests that the ongoing march of the extreme, authoritarian right has been interrupted. De jure annexation, just like President Trump’s “Deal of the Century,” seems to be off the table, as are plans to curtail the power of the judiciary. 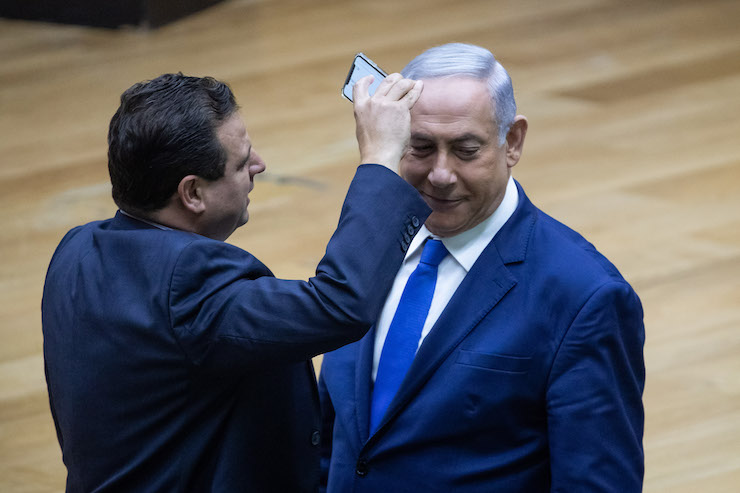 Benny Gantz — the former IDF general who campaigned on his pride over “sending parts of Gaza into the Stone Age” — has proved resistant to Netanyahu’s incitement against Palestinian citizens of Israel and their political representation. Earlier this year, he stood on the same stage as Joint List head Ayman Odeh. By the end of the year, he had a met with the Joint List’s leader to negotiate a possibly historic coalition. It’s not enough, and it doesn’t mend the many other wrongs in Blue and White’s platform, but it is a change for the better.

This is a story of powerful forces that have been pushing us in a very dangerous direction, and how they have been stopped by an array of counter-forces: from the Palestinian Authority’s refusal to bow down before Trump, to the journalists who uncovered Netanyahu’s political corruption; from the protestors who demanded his indictment and the legal system which did its job in doing so, to the actions of forces on the left both in the Knesset and in the streets, to the rising power of Palestinian citizens in Israel.

The rising power of Palestinian citizens

Shortly before the first round of elections in 2019, Local Call and +972 published a public opinion poll showing, among other things, that the vast majority of Palestinian citizens would like the parties representing them to sit in government. This would have been a first in the history of the state, and had previously been considered politically impossible. Since then, this theoretical option has turned into a real wildcard, redrawing Israeli politics. The Joint List has become the leading left-wing force in the Knesset (in part due to the shrinking of the Zionist left), with a rare opportunity to shape the future government.

At the same time, popular protests against under-policing and the rise of organized crime within Palestinian society have led even ultra-racists such as Netanyahu and Minister of Internal Security, Gilad Erdan, to heed the demonstrators and announce they will take responsibility to offer Palestinian citizens security.

As Amjad Iraqi recently wrote on this site, the Israeli right considers the growing stature of Palestinian political parties its biggest threat, and it is indeed becoming a significant one.

The shift in U.S. attitudes toward Israel

Everybody knows that Netanyahu and President Obama did not get along. However, that didn’t stop the latter — just three years ago — giving Israel the largest military aid package the U.S. has ever provided to another country. Nobody thought twice about it, and there was a bipartisan consensus on automatic support for Israel. After three years of Trump presidency and a strong friendship between the two countries’ leaders — both of whom are facing criminal charges — things have changed dramatically. Numerous Democratic candidates for the 2020 elections boycotted the AIPAC convention. Some spoke at the J Street conference instead, most notably Bernie Sanders, who discussed his support for the prospect of conditioning aid to Israel. A growing progressive public in the U.S. is demanding accountability on Israel’s side — a trend that is likely to keep developing.

In March 2019, several thousand teenagers marched in Tel Aviv to demand climate justice. Oren Ziv and I were the only two journalists present. The very real catastrophe of the climate crisis hardly got any attention from the public, politicians or the media.

Since then, it has become even more apparent how critical immediate action is, and that we have less time than previously believed to avoid irreversible and unstoppable global warming. However, the impending danger has brought an awakening. On the global level, tens of millions of people took to the streets this year, and green parties and “green new deals” of sorts are making their way into mainstream politics.

While Israel has been slower to respond, the second round of 2019 elections already saw parties integrating a climate crisis agenda into their platforms, and media outlets are starting to report the issue extensively. The change in public opinion can only go in one direction, and we all have a part to play in building awareness and putting an end to the use of fossil fuels and to industries like factory farming – the two greatest threats to humanity. 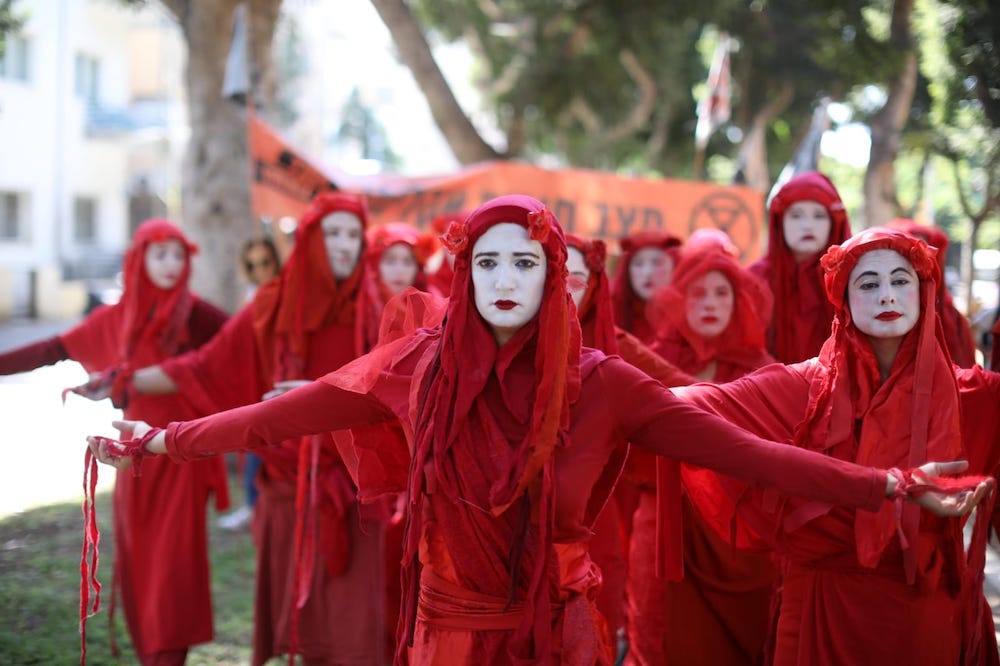 Protesters take part in a demonstration in Tel Aviv as part of the global climate strike, September 27, 2019. (Oren Ziv)

The release of Mustafa al-Haruf

In February 2019, Oren Ziv exposed on Local Call Israel’s detention of and efforts to deport Mustafa al-Haruf, a Palestinian journalist from Jerusalem. The story was translated to English and published on +972 Magazine, sparking a global reaction and leading journalist unions throughout the world to stand up in solidarity with al-Haruf. The plan to deport al-Haruf also turned into a diplomatic incident between Israel and Jordan. Eventually, al-Haruf was released from custody in October 2019, and will likely not be deported.

Freedom of expression protected in courts

In May 2019, Palestinian poet Dareen Tatour was retroactively acquitted of the charge of incitement by an Israeli court, after having been convicted and served a prison sentence over a poem she wrote. Recently, the Supreme Court ratified the decision, creating an important precedent for the defense for freedom of expression in art.

In another freedom of expression case this year, Anat Matar won a court case in a SLAPP (Strategic Lawsuit Against Public Participation) suit — usually intended to silence criticism — brought by Israeli right-wing activist Shai Glick. (Full disclosure: Anat Matar is my mother.) Glick sued Matar for calling him an “arch-fascist” in a Facebook post, but the court led him to settle for Matar publishing a second post, in which she explained why he really is an arch-fascist. Glick withdrew the lawsuit.

Throughout the year, several Israeli journalists with independent media outlets won additional court cases against SLAPP suits, even though Israeli law does not offer anti-SLAPP remedies.

The past year also saw several victories for local struggles within Israeli society. Two Mizrahi communities won important court cases in December: one the residents of the Givat Amal neighborhood in Tel Aviv, who are fighting for housing rights; and the other the families of disappeared Yemenite, Mizrahi and Balkan children. 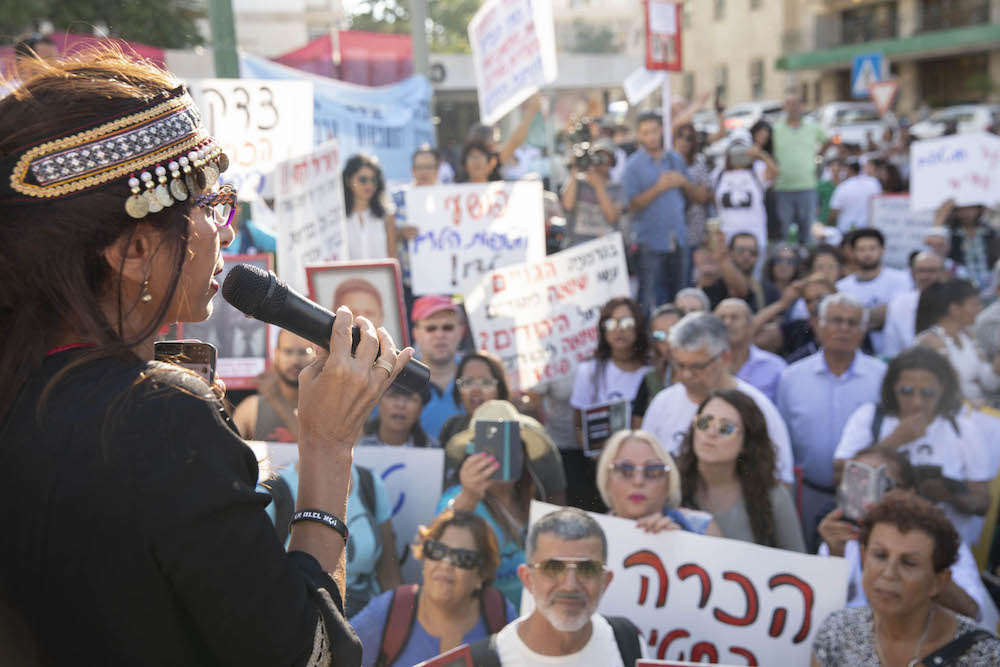 A family member of a child who disappeared during the early years of the state speaks during a rally commemorating the Yemenite Children Affair Jerusalem, July 31, 2019. (Oren Ziv/Activestills.org)

In southern Israel, the unrecognized Bedouin village of Rahma led a joint campaign supported by Jewish residents of nearby Yeruham to open a school in the village. The initiative was a success, and the state agreed to open the school in August.

After decades of controversy, in November several cities in Israel finally launched public transportation services on Saturdays (Shabbat), allowing hundreds of thousands of people to travel on their day off without having to rely on private transport.

The spirit of resistance

Of course, there’s so much more to be done. But beyond the victories, and beyond the fact that despair is a privilege we cannot afford, there is so much inspiration and hope in the fact that people in this country keep fighting to make it a better place.

Throughout this year protestors in Gaza have returned to the Israeli border fence week after week, in spite of unimaginable violence and sniper fire, demanding their freedom. Hundreds of children walked out of school to protest when their friends, children of Filipino migrant workers, were arrested ahead of deportation, and those same children have blockaded prisons and helped get their friends released.

Palestinian women have fought against sexual violence (which was part of +972 Magazine’s story of the year). Workers unionized for better labor conditions; Ethiopian Israelis blocked highways in protest at police racism and violence; conscientious objectors went to prison so as not to serve the occupation; animal rights activists fought against the cruelty of how we treat living beings; Israeli activists stood in solidarity with Palestinians attacked by police in Issawiya in Jerusalem and by settlers in the Jordan Valley — and the list goes on.

At +972 Magazine we’ve been reporting these stories, serving as a resource for anyone who wishes to support the fight for peace, equality and social justice in Israel-Palestine, and offering a platform for the silenced voices of those who are committed to this fight. And you can expect us to double down on all of that in 2020.

emailemailemail
Before you go…
A lot of work goes into creating articles like the one you just read. +972 Magazine is nonprofit journalism, owned by many of our writers, editors, and journalists. In order to safeguard that independent voice, we are proud to count you, our readers, as our most important supporters. With your support, we can keep +972 Magazine a strong, independent, and sustainable force helping push the global discourse on Israel/Palestine.
DONATE
More About Palestinian Citizens of Israel 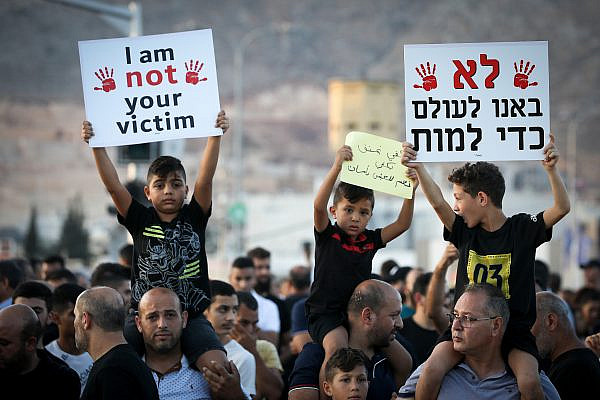