Musa, Widad and thousands of Palestinian children in Gaza had cried out for the world’s attention when they broke the Guinness World Record. Had we heeded their message, perhaps the sky over Gaza today would not be choked with plumes of smoke.

By Nitin Sawhney and Roger Hill

Four years ago we began making a documentary film focused on two charismatic teenagers in the Gaza Strip, whose passion for kites seemed unusually spirited in a place beset by years of blockade and deprivation. Along with thousands of other Palestinian children, they were determined to break the Guinness World Record for the most kites flown at once.

When we first met Musa in the village of Seifa, he was a confident 14-year-old who enthusiastically built large kites with great precision using newspaper, sticks and wheat-paste. Widad, his 12-year-old sister, competed with Musa to build her own colorful kites while teasing him with witty humor and sarcasm. They wanted to participate in the record-breaking event so that Gazans could finally be seen and heard – they wanted the world to notice them and the war-torn, besieged coastal strip of land that is their home.

“I am expressing myself and writing a message to the entire world,” one kite-flying girl declared on the day of the record-breaking event. The message written on her kite?: I have the right to pride, to education, to justice, equality and life. Musa in his wisdom felt that kite flying had another crucial role to play. “It will help us forget the trauma of war,” he told us.

When we began filming in July 2010, Musa and Widad had already lived through the devastating 2008-2009 war in Gaza known as “Operation Cast Lead.” In November 2012, they would survive yet another violent campaign of aerial bombardment.

Musa and Widad are now enduring their third war; the harshest, most catastrophic assault yet. It was traumatic enough during Cast Lead, when the family huddled together in one room as the children screamed in fear from loud detonations surrounding them. On July 22, 2014, their home was destroyed altogether and the entire family displaced. 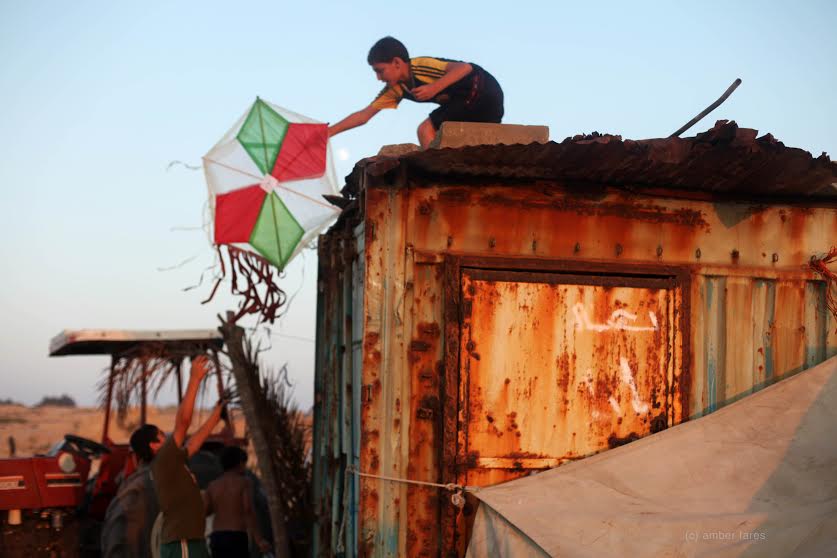 Musa fetching his kite from a roof while flying it on the beach in Gaza, during the filming of Flying Paper in July 2010. (photo: Amber Fares)

Since the start of this war at least 2,101 Palestinians have been killed, over 70% of whom are civilians. On the Israeli side 64 soldiers and six civilians have been killed. Whatever the stated purpose for the hostilities, it is clear who is affected most by this onslaught: Gaza’s children. About 40% of Gaza’s population is under the age of 14, so any indiscriminate bombardment there will inevitably endanger them disproportionately.

At least 493 Palestinian children have been killed thus far with thousands more injured, many of them critically. Children have been attacked in their homes, in parks and playground, in hospitals, even in United Nations schools designated as safe areas to shelter displaced civilians. 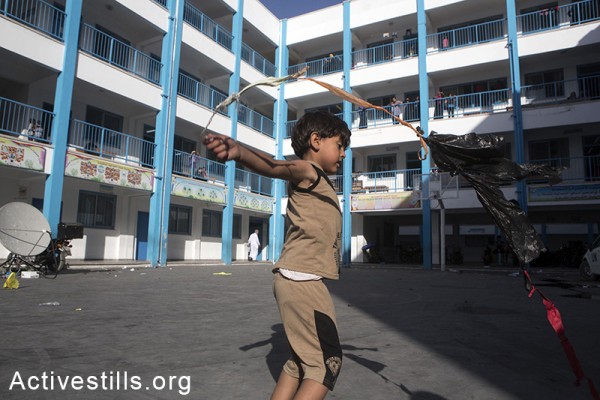 On July 28, 2014 the first day of the Muslim holiday Eid al Fitr, a playground in Beach Refugee Camp was shelled, killing eight children. Widad and Musa’s own three-year old sister Afnan was severely injured on July 22, 2014 by a tank shell fired at their home.

Gaza’s children have endured hardships beyond these repeated assaults. Israel’s crippling blockade of the Gaza Strip over land, air and sea in the past seven years has led to a level of deprivation that human rights organizations have condemned as collective punishment. Lack of economic development, trade, employment, and severe restrictions on opportunities for education and travel have been devastating as have the frequent shortages in food, medicine and construction materials, leaving Palestinians in Gaza with an unbearable situation.

All violence that targets civilians must be condemned; both Israelis and Palestinians have the right to live in safety, security and dignity. However, Palestinian children are the ones bearing the brunt of the hostilities in this war as they have in the past. One can hardly comprehend the severe physical disabilities and emotional traumas that the children, who managed to survive the daily bombardment of Gaza, will be left with in coming months and years. 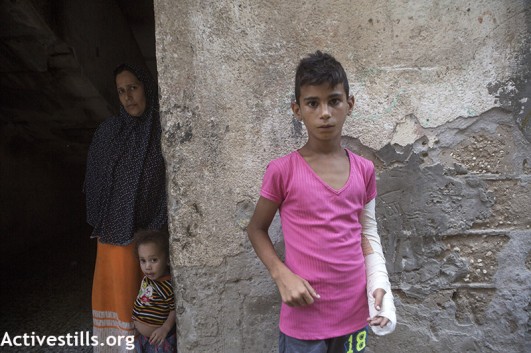 One of two children who survived an attack that killed four Palestinian boys playing on the beach in Gaza on July 16, 2014. (photo: Anne Paq/Activestills)

On July 24, 2014 Abeer Ahmed, our co-producer who was only 16 when she began working on our film, wrote to us from her home in Jabaliya refugee camp:

Everyone is anticipating their own death, not knowing who will go first. I look intently into the faces of my siblings and mother at every moment, fearing I will lose them next. At night one can’t sleep from the sound of mortar shelling and bombing. The children wake up screaming, frightened with terrifying nightmares…

According to the U.N., at least 373,000 children in Gaza will require some form of direct and specialized psycho-social support. When the war finally ends will they still be visible to the world? 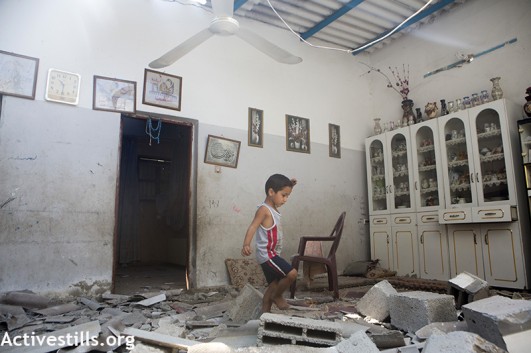 A child amidst the rubble of his home, which had been destroyed the night before in Gaza. (photo: Anne Paq/Activestills)

Musa, Widad and thousands of Palestinian children in Gaza had cried out for the world’s attention to their plight with all but colorful scraps of paper, fabric and string filling the sky. Had we heeded their message then perhaps the sky over Gaza today would not be choked with plumes of smoke.

We worry endlessly about Musa, Widad and Abeer in these dark, violent days—about their physical well-being, and the extent of trauma that they and all of Gaza’s children are experiencing. We hope the next time we see Musa his eyes will have the same glow he had the day he proudly built the largest kite he could fly with a camera attached, to film over 7,200 kites breaking the Guinness World Record in Gaza. “Is there anything more beautiful?” Musa asked wistfully on that day.

Nitin Sawhney is Assistant Professor of Media Studies at The New School in New York City. He has been conducting youth media programs and psychosocial research in Palestinian refugee camps in the West Bank, Jerusalem and Gaza since 2006. Roger Hill is an independent filmmaker based in San Francisco, who previously directed documentary films including Witness a Peace Movement and Struggle about anti-war protests and voter suppression during presidential elections in the U.S. Their new award-winning film Flying Paper has been screened in over 25 international film festivals and is currently being distributed by Journeyman Pictures.

Related:
How will Gaza’s children carry their scars into adulthood?
What would Israelis say to families of civilian casualties in Gaza?
Gaza deaths aren’t worth a mention in leading Israeli paper